The Maud Adams You Don’t Know 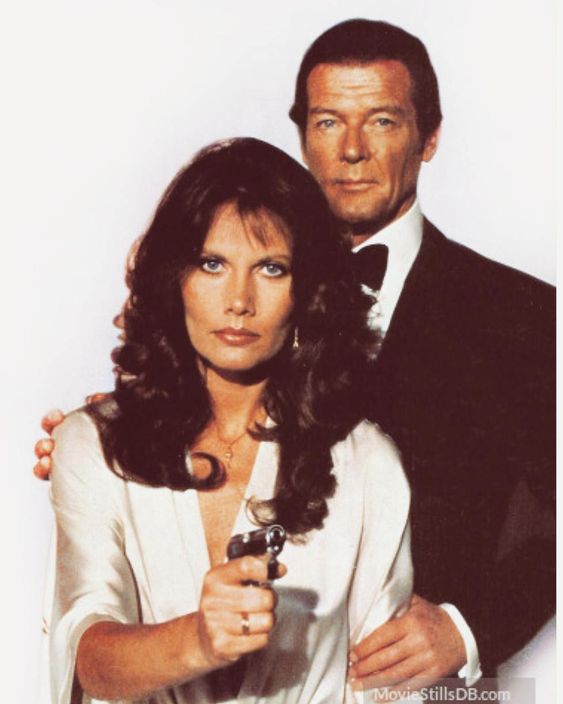 The Maud Adams you do know was born in Sweden in 1945 and became famous as the title star of Octopussy, the 1983 James Bond movie with Roger Moore. She had previous been the villain’s doomed mistress in The Man with the Golden Gun (1975). Adams began as a model and had a 30-plus year career in movies and television. She is now retired from all that.

In an interview with Stumpedmagazine.com, Adams said that “Looking back on it . . . How can you not really enjoy the fact that you were a Bond Girl? It’s pop culture and to be part of that is very nice.”

But we’re not talking about her.

During several summers in the late 1970s and early 1980s, my wife and I spent our vacation at one of a cluster of several “parks” (really groups of summer cottages) in the Catskills, in Haines Falls and Tannersville, New York. When the postcard bug bit in the late 1980s, I began looking for postcards from these parks. They weren’t very expensive so I bought everything I could find. 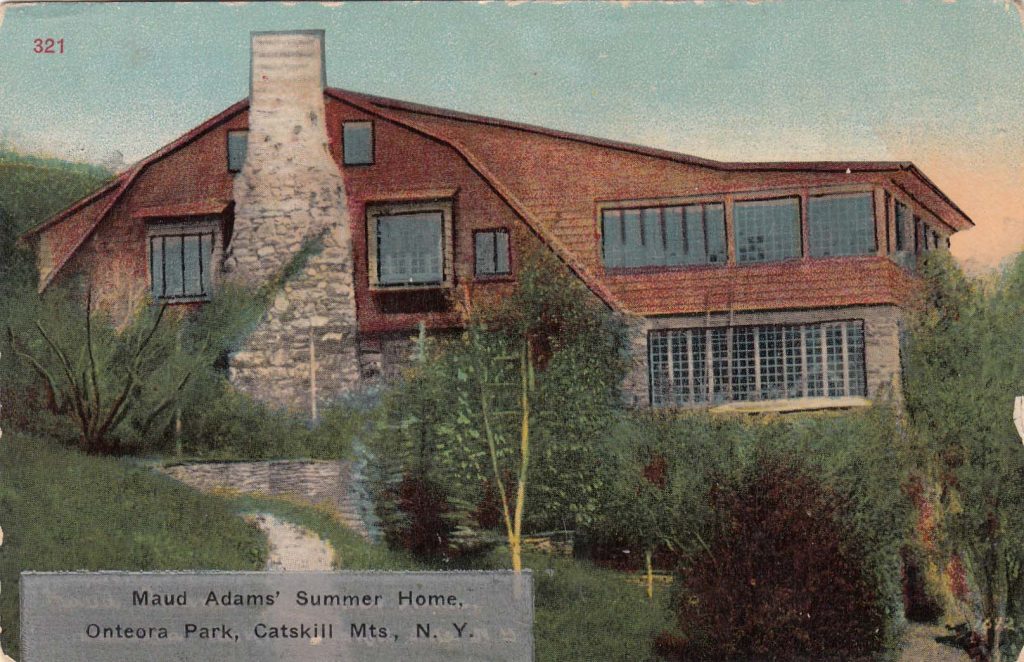 One park, “Onteora,” in Tannersville, eventually yielded several cards that showed a large cottage whose owner, the captions said, was “Maud Adams” (well, one said “Maude,” but it was obviously the same building). I had no idea why a postcard of an individual summer cottage would be captioned this way, so I shrugged, stowed the cards, and forgot about them.

Several months ago, when I found this card of Maud Adams in a 25¢ box, I was intrigued. And it jogged my memory of the cards I’d bought 20 years ago.

OUR Adams (born “Maude” but sometimes misspelled Maud, as on this postcard) was born in Utah in 1872 to an actress mother and banker father. She began her stage career at two months with her mother and by age ten she was in New York in Esmerelda. She and her mother bounced between her family in Salt Lake City and various acting jobs on the east and west coasts until Maude, 16, left permanently for New York.

There she was discovered by Charles Frohman, a successful New York theater producer who had an eye for up-and-coming actors. Frohman was building a New York City theater empire and needed a stable of actors for the shows he staged in them. He signed her to a contract in 1890 and gradually moved her out of the ingenue and juvenile roles she had been playing. 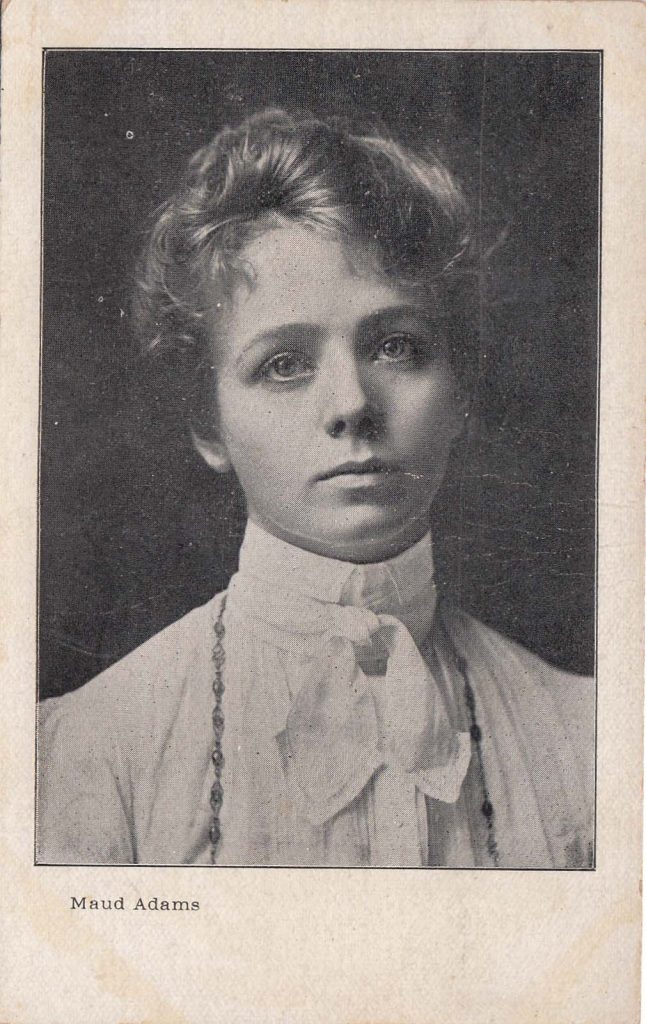 Frohman was a demanding mentor, especially concerned with appearances of his actors. He made it clear that Adams, as well as all his actors, was to behave off stage with great discretion at all times. That fit Adams’ personality of shy and retiring. Many years later Ethel Barrymore called her “the original I-want-to-be-alone woman.”

In 1896, Frohman convinced J. M. Barrie to let him stage Barrie’s The Little Minister in New York, with Adams as the title character. It was a smash success, running for more than two years and vaulting Adams into stardom. Her title role in the first American production of Barrie’s Peter Pan, or, The Boy Who Wouldn’t Grow Up in 1905 was an even bigger success.

Another of her triumphal appearances was on June 20, 1909, when she performed in the title role of Joan of Arc in the American debut of Friedrich Schiller’s The Maid of Orleans. The one-night-only presentation was on a gigantic scale at Harvard University’s 15,000-seat outdoor amphitheater. Every seat was filled and those who attended saw not only Adams but other actors from Frohman’s stable.

Alphonse Mucha immortalized Adams in that role in this painting, which is now in the Metropolitan Museum of Art.

Frohman promoted Adams assiduously. In 1909 he published The Maude Adams Book, a 32-page booklet with tipped-in photographs of her in various costumes.

Adams continued to appear in New York and to tour the country, making and investing enormous sums from her appearances. There are reliable reports that for several years she made a million dollars annually.

She certainly had enough money to own three homes: one on New York City’s 41st Street; a working farm in Lake Ronkonkoma, Long Island; and a third, a summer home, in New York’s Catskill Mountains. On tour she travelled in a personal railroad car built to her specifications for the entire troupe. She was also widely admired for her quiet generosity to both individuals and charities.

Charles Frohman died in May 1915 when, as a passenger on the Lusitania returning from England on business, a German U-boat sank the ship.

Adams retired in 1918, supposedly suffering from the flu pandemic but perhaps also from the sheer exhaustion of touring. In retirement she declined offers to appear in films but nevertheless became heavily involved with General Electric to improve their stage lighting systems and with Eastman Kodak to further their color photography business.

However in 1938, at the age of 66, she did do a screen test for David O. Selznick with Janet Gaynor for the role of Miss Fortune in the film The Young at Heart, but negotiations failed and the role when elsewhere. (The screen test has been preserved by the George Eastman House.)

Adams dipped her toe back into acting in 1934, but only in regional productions of Shakespeare, and she retired for good in 1937. She took a position at Stephens College in Columbia, Missouri, as professor of dramatic art from 1937 to 1949. She died in 1953, aged 80, at her summer home in Tannersville and is buried in Lake Ronkonkoma.

Bill Burton began collecting Ossining, New York postcards when he lived in that Hudson Valley town. His collection expanded, of course, to include his college, the neighboring towns, and places where he and his wife traveled. In retirement, he's refocused on Delaware and the DelMarVa peninsula towns, but he’s just as likely to be found parked in front of the 25¢ boxes at shows.
PrevPreviousCooks Forest State Park
NextThe Great Union Station Train Wreck of 1953Next
2 Comments
Oldest
Newest Most Voted
Inline Feedbacks
View all comments
Ellen Richardson

So interesting! I am amazed that I’ve never heard of her. She was also a beautiful woman.

I have a photo postcard of John Burroughs at Woodchuck Lodge sent by Maude Adams to V. Valta Parma at the Library of Congress. It can be viewed in two posts on my instagram account “marcstoys”.