All went well for the first hour until a faulty brake caused a stop in Kingston Swamp, Rhode Island.  The inspectors found an angle-cock that controlled the air brake connection between the third and fourth car was in the closed position.  This condition prevented the cars to the rear of the third car from having the brake released from the locomotive.  The angle-cock was opened, and train #173 proceeded – 56 minutes behind schedule.

When the train arrived in New Haven the diesel was changed for a New Haven Railroad electric locomotive, three cars were added, and the crew changed.  With no mention of the earlier brake problem, the 16-car train left for New York 45 minutes late.

The brakes functioned properly between New Haven and New York, and the train arrived at Pennsylvania Station only 38 minutes late.  While in New York, the electric locomotive was changed and train #173 left New York with GG1 number 4876 in the lead and engineer Harry Brower at the controls.

Throughout the early morning hours the “Express” made stops at Philadelphia, Wilmington, and Baltimore.  The brakes were applied 14 times in the 200+ miles between New York and Baltimore without a problem and there is no record of any other mishap or malfunction.

Since the fourth car was destined for Baltimore it was set off and the train re-coupled.  As he left Baltimore, engineer Brower set the controls for 80 mph and did not apply the brakes until the train reached signal #1339, which sets two miles from Washington’s Union Station.

Immediately Brower knew something was very wrong.  Applying the brakes did not slow the train, so Brower set the emergency brake, which should have brought the train to an immediate halt, but again #173 did not stop.   It didn’t even slow down!

It is now quarter after 8 a.m. and the train was running out of control on a downgrade on track 16 which dead-ended at the terminal.  Brower knew that the brakes on the locomotive and the first few cars had applied, but the rest of the cars were pushing the train right into the station.  He stayed at the controls and repeatedly blew the GG1’s horn, warning everyone away from the track. 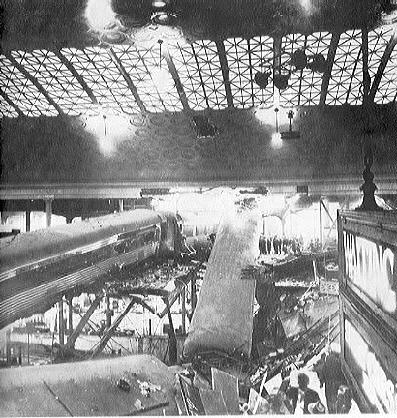 The tower operator at the entrance to Union Station heard the horn blasts and knew their meaning.  He called the stationmaster and told him that a runaway was coming on track 16 and to clear the way.  Evacuation was immediate.

The train crashed through the wall, smashed into the stationmaster’s office at the end of track 16, demolished the main newsstand and was sliding across the concourse toward the waiting room when the floor gave way and the GG1 and two of the cars fell through the floor into the basement baggage room.  The time of the wreck was established by a broken clock found in the debris, at 8:38 a.m.

87 people were injured in the crash, but luckily, no one was killed, thanks to the actions of the railroaders involved.  The cause of the wreck was found not to have been the same problem with the angle-cock that had closed in Rhode Island, but a condition caused by the re-coupling in Baltimore.

With the inauguration just days away and with thousands of visitors scheduled to arrive, the station had to be repaired immediately.  By 7:00 a.m. the next day, the cars, which had fallen through the floor, had been removed.  The GG1 was left in the baggage room, a temporary floor was built over the locomotive, and the station re-opened just three days after the accident. 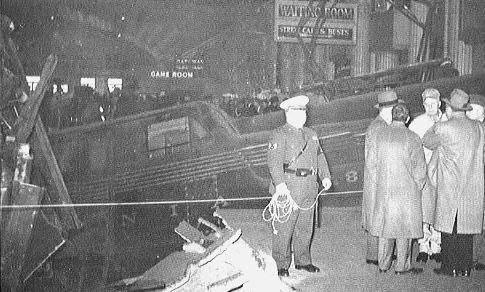 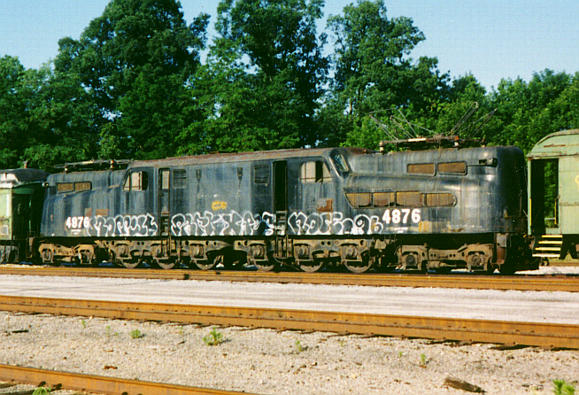 Today, 4876 rusts away in a Maryland train-yard.

After the inauguration, the GG1 was cut into three pieces and removed from the station’s baggage room.  The pieces were sent to the Altoona (Pa.) Shops of the PRR, to be rebuilt.  When the work was complete 4876 was painted Tuscan red and returned to service and continued in use until 1985.  It is shameful that a piece of Americana with such a history should be rusting away, but currently it is in a B&O storage yard not far from where this event occurred.

Wow. The second card shows how the car crashed through the wall and fell through the floor. I am impressed that they were able to build a temporary floor over the locomotive in just three days.

It’s great that we cover the story as it was a historic event. It covers all the information from all aspects, except one. There is not much coverage about the trains consist. We know that the first 3 or 4 cars were New Haven, but what were the car numbers, we do know #8665 was the third car, according to the account. We have no real info about the entire consist, nor do we have any information about other locomotives that brought train from Boston to NY. It would be nice to know the complete story from beginning to end.… Read more »