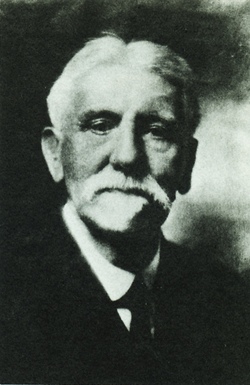 At age eighteen, Andrew served, with the rank of private, as a bugler at the first battle of Manassas.  He moved up quickly, and by July 1861 was a musician in Virginia’s 30th Regimental Band, and then on June 1, 1862, he was promoted to principal musician. He distinguished himself as a composer of dozens of marches (the John Philip Sousa of the South) and other military music, including the dirge played at the funeral of General Thomas J. “Stonewall” Jackson.

The most curious fact of Bowering’s military career was that he also played the last “military recall” during the final religious service of the Civil War at Appomattox Court House. This made him one of the few who were present at the first battle and the final surrender.

Benjamin and Lucinda Bowering, Andrew’s parents, moved to Fredericksburg, Virginia, before Andrew came of school age. They raised a family and were active members of the community. Andrew was educated in the local schools and in his mid-twenties took employment in the secondary schools teaching music.

Throughout his life, Bowering married three times.  He had one son, Benjamin, who attended Virginia Military Academy, where he later became an assistant professor of music and in 1916, composed VMI’s school anthem.

Bowering was active his entire life in fraternal and military organizations. He was especially devoted to organizations concerned with Confederate veterans. He regularly attended reunions and just as often, he had composed a new piece of music devoted to the event.

He died in Fredericksburg at age 80. 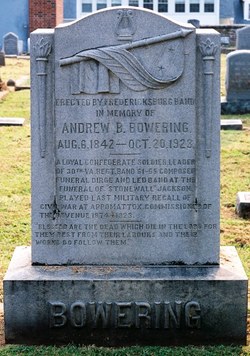 Fredericksburg postcards, including this one of Bowering’s tombstone can be found in local stores for $1.

PrevPreviousA Story from Postcard Genealogy and the Value of Space-Savers in Your Collection
NextGod, Glory and Gold vs. God, Glory and … Dead BugsNext
0 Comments
Inline Feedbacks
View all comments
0 0 votes
Article Rating
Menu