A Story from Postcard Geneology

and the Value of Spacesavers in Your Collection

The card you see here is what many collectors call a space-saver.  Space-savers are usually in fair to poor condition. Those who buy space-savers think along the line that it will save a space in my collection until I find a better copy. This is perfectly good logic, but in the majority of cases a better copy is never found. Here is a perfect example. This card has been in my collection for over a decade; since I bought it I have never seen another.

Nevertheless, in this case the condition is part of a great story that makes this card unique.  I would venture a guess that you have such a card in your collection and you would never trade it, even for a new one, if you knew the back-story.

There is a renewed and vibrant interest in the world today that encourages the research of one’s own ancestry. There are hundreds of variations, but one concept is based on information found or discovered on very old postcards – like the space-saver card featured above. I call it “Postcard Genealogy.” 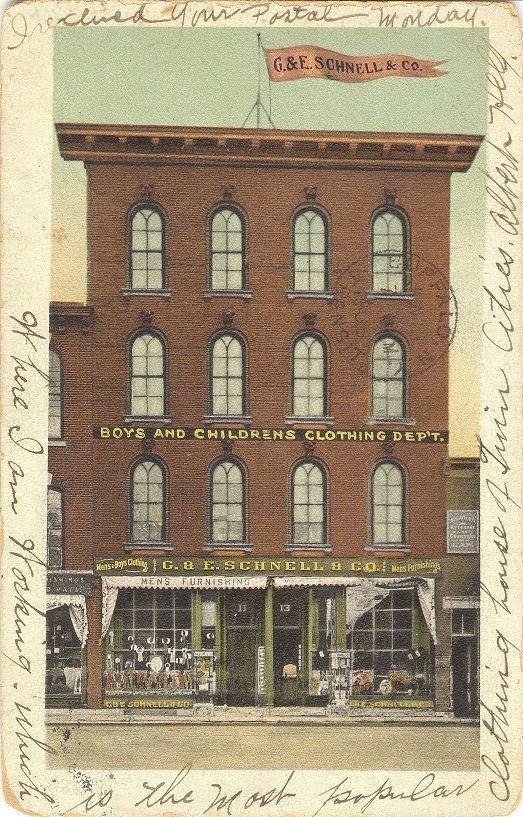 The story starts around 1872 when Fred Helf, immigrated to the United State from Germany and found work as a butcher in Niagara County, New York. In 1882 he married Anna and in the 1900 Federal Census it is recorded that they had six children with five living at the time of enumeration. They were Edward, Florence, Albert, Walter and Roy. Mrs. Anna Helf died in the decade between June 1900 and 1910.

In 1906, near the end of the undivided back era of American postcards, Albert Helf, the second son of Fred Helf, now of 299 Adam Street in Tonawanda, New York, left home on most days to work at G. & E. Schnell & Company. Schnell was considered a front-line Men’s and Boy’s Outfitter that specialized in clothing for males of all ages including hats and toggery of various brands.

At some point in time, Albert apparently wanted a Miss Mabel Smith in Kinzua, Pennsylvania to know about his employment at Schnell’s. The card is postmarked at Tonawanda, New York, 4 PM, June 13, 1906.  The Kinzua postmaster marked it received at 10 AM, June 14th.

Albert’s message was written on the borders of the picture side of the card. It reads: Where I am Working, which is the Most popular clothing house of Twin Cities. Albert Helf. At the top, he wrote: I received Your Postal Monday. [FYI: “twin cities” refers to Buffalo and Tonawanda, N.Y.]

At the time Miss Smith was the 15 year old daughter of an oil rig tamper in Warren County, Pennsylvania. It is unknown what the connection was between Helf and Smith. Later in life Mable married a Pennsylvania Railroad conductor named Michael Meskell; they lived in Oil City, Pennsylvania, until Mabel died of heart disease in June 1917 at age 26.

In the years following 1906, Albert worked at various jobs around the Niagara County area and served in the New York National Guard from June of 1917. After his discharge Albert was a reasonably successful salesman for a copper pipe manufacturer. By 1919 he was married but found himself in financial difficulties and was arrested twice in 1919 for passing bad checks in San Diego and San Francisco, California. 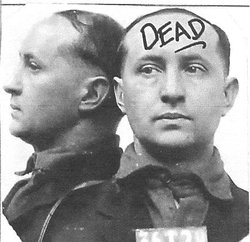 In 1922 he was arrested again and convicted of embezzlement of his employer’s funds. He was sent to the California State Penitentiary at San Quentin, California, on March 14, 1922, to serve a one to ten year sentence. He was paroled on October 14, 1924. His prison record described him as six feet tall and at 182 pounds, with a fair complexion, balding brown hair and having violet colored eyes. 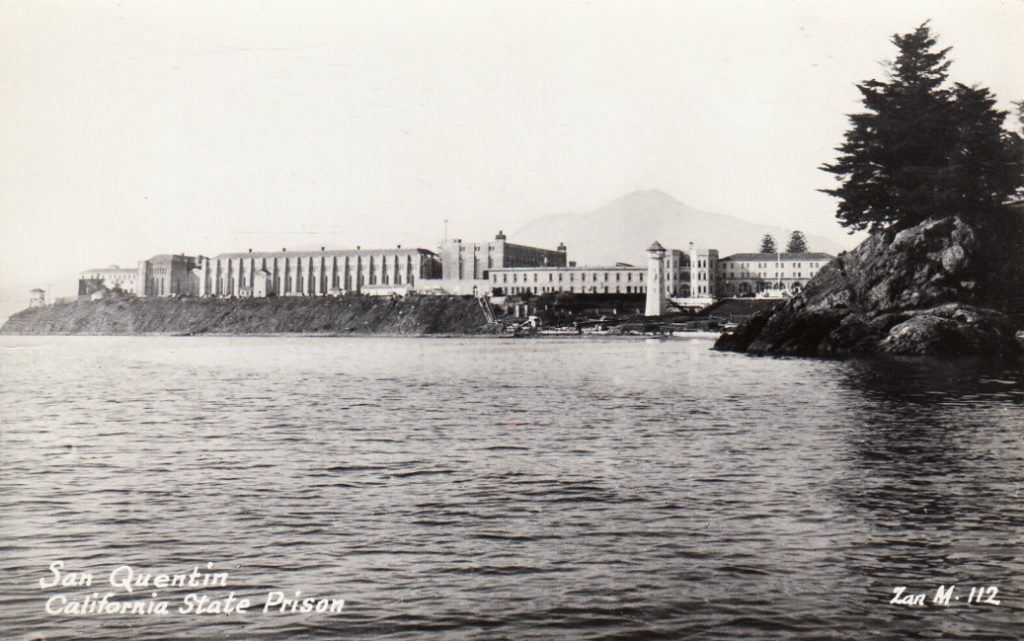 Apparently Helf preferred being called “Al” and according to San Quentin Mug Books and the 1930 Federal Census Al Helf was enumerated as a prisoner with an occupation of jail scrubber. 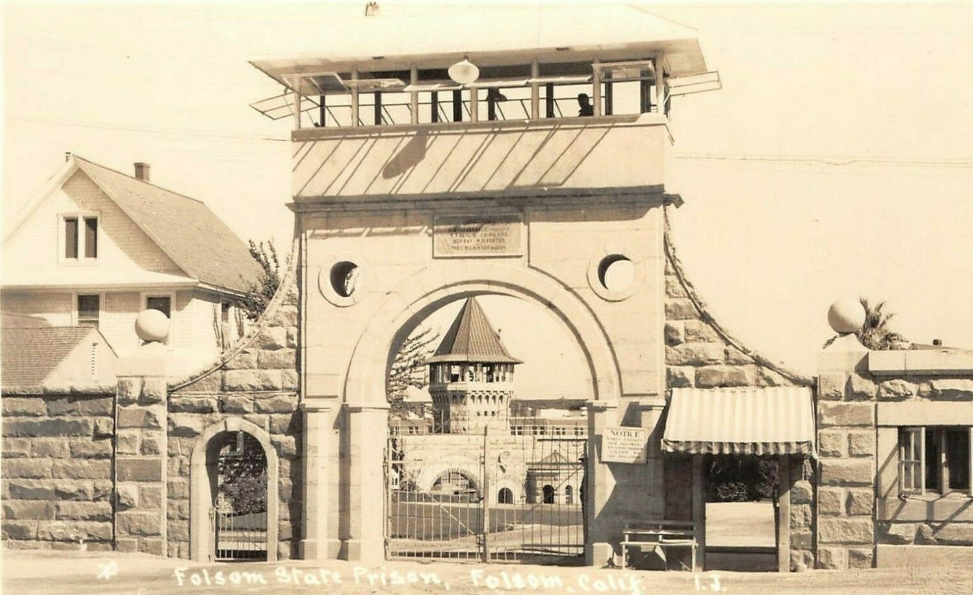 Late in December 1931 Helf was living on 43rd Avenue in San Francisco, he was married to a lady named Adelaide, and was working for an import office. Arrested again in 1935 for a crime in Los Angeles, Helf was convicted and sent to Folsom Prison and died there on July 19, 1938 at age 49. There is no record of the cause of his death, but after all proper attempts he was interred in the Folsom Prison Cemetery. The inscription on his headstone reads: 20043. 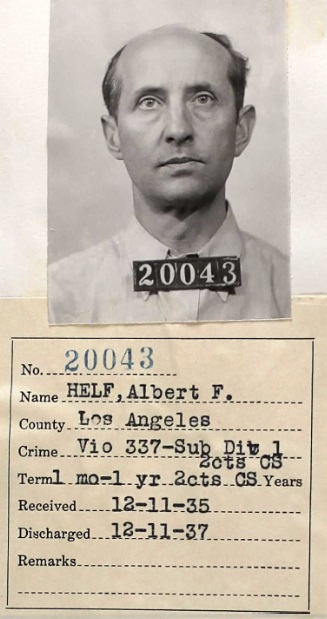 As for Kinzua, Pennsylvania, the home of Mable [nee Smith] Meskell, there is a story there too. The history of the village is well documented in both public records and private diaries. The reason is that the village no longer exists – it is deep underwater at the bottom of what is now known as Kinzua Lake.

In 1960 without prior knowledge, the villagers received official government notice that they had but three years to vacate their homes. Construction of a dam along the Allegheny River was about to commence and the resulting reservoir would become the deepest lake in Pennsylvania.

Mabel Meskell was buried in Kinzua Cemetery on June 20, 1917. There are stories of how the local cemeteries washed away as the Kinzua Reservoir filled, but my research must continue for it is unknown if Mrs. Meskell’s grave was one of the many moved to other area cemeteries or was it one that the waters washed away.

Today, there is a Kinzua State Park adjacent to the lake, where thousands go in the summer months to camp, picnic, and to boat, sail, or water ski.

Ray Hahn is a retired educator, but he has never stopped teaching. His decades of researching, writing and editing a newsletter for the South Jersey Postcard Club has been a world-class education in trivia. In addition to postcard collecting, Ray’s other interests include history, genealogy, and touring the world with his wife Marie. Ray often advises his readers to "Join me as we explore the world one postcard at a time." Ray and Marie live in New Jersey.
PrevPreviousThe Day Hank Williams Died
NextPart II – While still holding Earth in the heavens, here’s Atlas at one of his side-jobs.Next
7 Comments
Oldest
Newest Most Voted
Inline Feedbacks
View all comments
Paula Koester

I have never heard of a postcard history magazine. l am a writer at heart,and I absolutely love postcards. How fascinating that someone actually writes a magazine about postcard How could I find out about submitting a postcard story that I think people would really enjoy. It is about cleaning out a house, but it wasn,t a family member of mine. I have always wanted to write a book about the whole experience. In the end it is all about how much this family loved each other with postcards and letters saved through 3 generations . Told through. The perspective… Read more »

Paula,
Please contact me at editor@postcardhistory.net. We are always looking for new material. Ray, Editor, PCH.net

How did you fall in love with collecting postcards?

This sounds like a great idea for an article! Please send an email to our editor, editor@postcardhistory.net
All best, Bill Burton, publisher

Believe it or not I am just reading your reply. I never knew u replied to me let me hear what I would need to do. I hope this is still the correct address to reply to. Thank You.

So glad to see your magazine. I am in my 80’s and have been collecting post cards since the age of 10. One of my customers at that time was about 90 years of age, lived all alone and was at the stage of leaving his home to live with relatives. He was on the edge on my route and I used to like to spend time listening to the many adventures he had experienced during his life time. One of the stories he told me that he was a pilot in the first world war and while flying a… Read more »

Fascinating story. Al sounds like he could have been a character in one of Johnny Cash’s prison songs.