While still holding Earth in the heavens,

here’s Atlas at one of his side jobs.

In Greek mythology Atlas was said to have been skilled in mathematics, philosophy and astronomy. (Atlas, “Wow!” What a guy.) From your scholarship in Greek mythology,  you know his job of holding Earth on his shoulders so mankind can tough the heavens was a punishment for leading the Titans into a battle against the gods of Olympia. Right?

Right or not, with some degree of skepticism, today we may wonder if someone really was that smart, why didn’t he win the battle so he could write history from his perspective? That’s the way it is these days. If you don’t like what happened in the past you whine and cry about it until society buckles under and sweeps the facts of once-upon-a-time under the rug of social media.

The thing is, Atlas got a raw deal, but humanity admired and adored him for centuries after those who meted out his punishment were forgotten. (Zeus? Who’s he?) Even though he was forced to work stark naked someone even named a range of mountains in North Africa after Atlas.

So when Father Time achieved 1914 and it was time to build the Panama Canal, who did they hire to do the heavy lifting? (Well, of course, Atlas!)

And here is a poster style postcard showing Atlas hard at work pushing North America just a little farther north so humanity would have enough space to dig a 51 mile ditch. (Thanks Atlas, you’re quite a guy.) 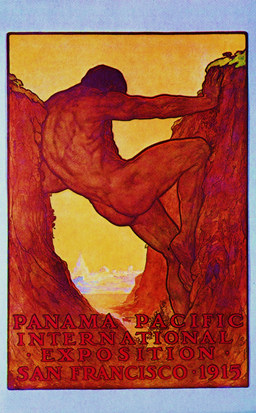 PrevPreviousA Story from Postcard Genealogy and the Value of Space-Savers in Your Collection
NextGod, Glory and Gold vs. God, Glory and … Dead BugsNext
0 Comments
Inline Feedbacks
View all comments
0 0 votes
Article Rating
Menu