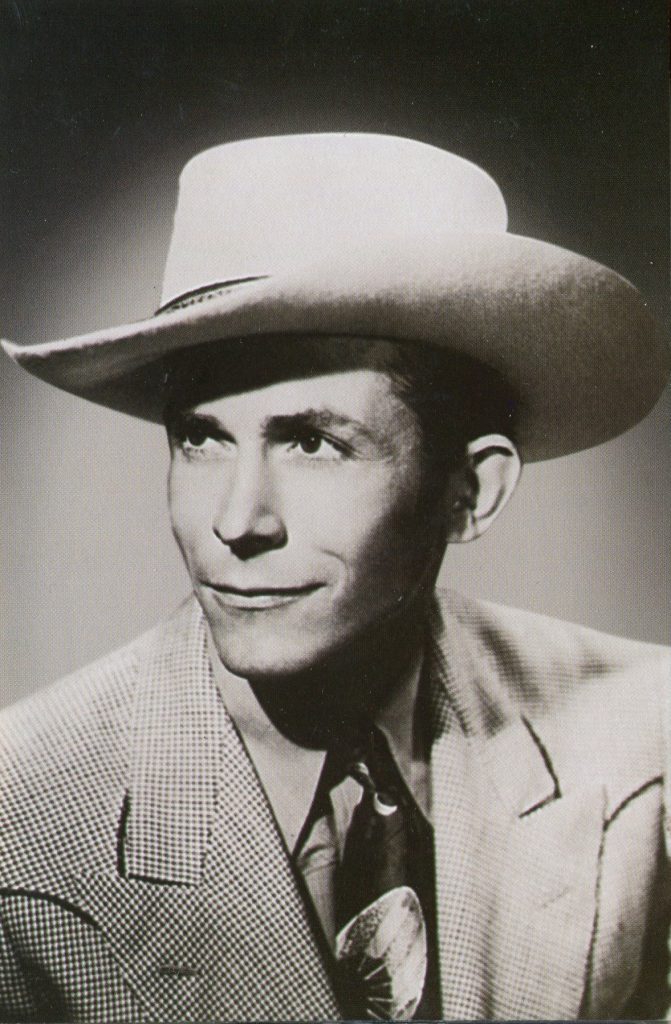 It was New Year’s Day, 1953. The weather was calm after some lengthy ice and snow storms throughout the mid-west. The temperature hovered in the mid-thirties. That was the day Hank Williams died. He was 29.

The official account of the coroner in Canton, Ohio, was presented 67 years ago but it is still controversial. The controversy is mostly a matter of semantics; the coroner said heart attack, Williams’s biographer said heart failure due to alcohol and drugs.

It is certain that if you remember Williams, you are probably in your mid to late seventies. But if you do remember him you take great pleasure in recollecting his velvety voice with his signature nasal twang and his Alabama accent. Unlike other country singers and songwriters, Williams made no effort to hide his most idolized swing and sway style.

Williams was scheduled to perform at the Municipal Auditorium in Charleston, West Virginia on Wednesday, December 31, 1952. Advance ticket sales were heavy but because of an ice storm in the Nashville area, Williams could not fly. He hired Charles Carr to drive him to the concerts. Carr was a young college student, but still an experienced driver. When the weather turned bad, Carr called the Charleston auditorium from Knoxville to say that Williams would not arrive on time. The Charleston event was cancelled and Carr was told to change routes and head toward Canton, Ohio, where Williams was to play a New Year’s Day concert. Carr’s account stated that they left Montgomery, Alabama, at around 1:00 p.m.

Williams arrived at the Andrew Johnson Hotel in Knoxville, Tennessee, where Carr checked in at 7:08 PM and ordered two steaks from the hotel’s restaurant to be delivered to their rooms. He also requested a doctor for Williams, as Williams was feeling the combination of the chloral hydrate and alcohol he had drank on the way from Montgomery to Knoxville. When Dr. P. H. Cardwell arrived he injected Williams with two shots of vitamin B12 that also contained a quarter-grain of morphine. Carr and Williams checked out of the hotel at around 10:45, but it is remembered that hotel porters had to carry Williams to the car. He was weak and unable to walk on his own and had been coughing and hiccupping. At around midnight on New Year’s Day, Thursday, January 1, 1953, they crossed the Tennessee state line and arrived in Bristol, Virginia.

Carr stopped at a small all-night restaurant and asked Williams if he wanted to eat. Williams said he did not, and those are thought to be his last words. Carr later drove on until he stopped for fuel at a gas station in Oak Hill, West Virginia, where he discovered Williams seemingly asleep in the back seat. He was unresponsive and rigor mortis had already begun. Carr immediately realized that he was dead and informed the filling station’s owner, Glenn Burdette, who called the chief of police. 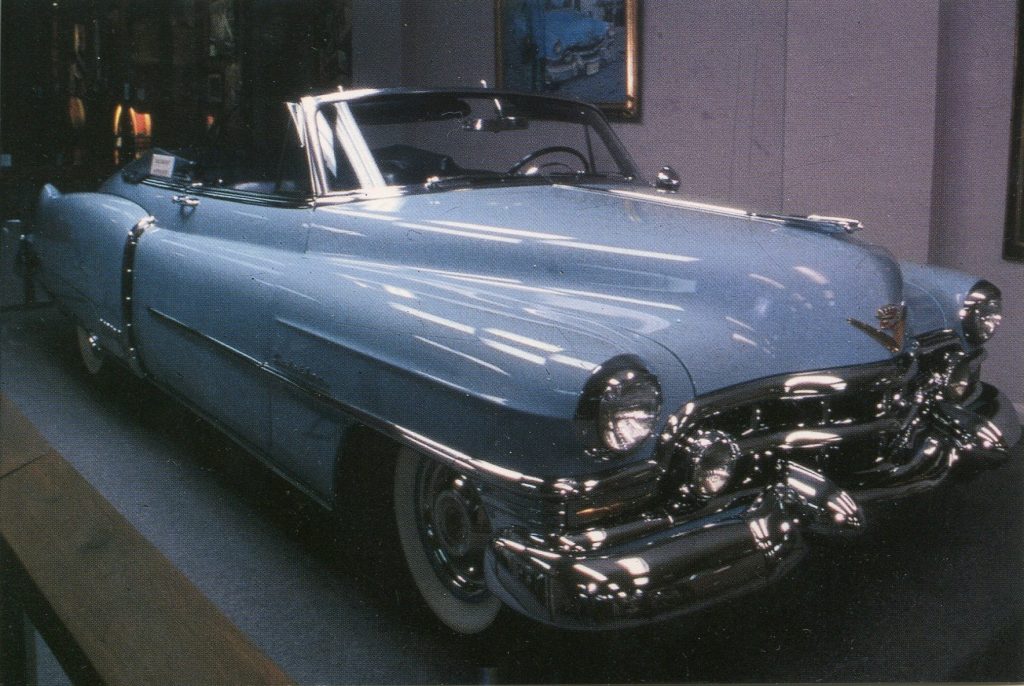 Hank Williams died in the back seat of his 1953 baby-blue Cadillac convertible.

The town’s coroner and mortician, Dr. Ivan Malinin, performed an autopsy on Williams at the Tyree Funeral House. Malinin found hemorrhages in the heart and neck and pronounced the cause of death as “insufficiency of the right ventricle.” That evening, when the announcer at Canton announced Williams’s death to the crowd, they started laughing, thinking that it was just another excuse. After Hawkshaw Hawkins and other performers started singing “I Saw the Light” as a tribute to Williams, the crowd realized that he was indeed dead. 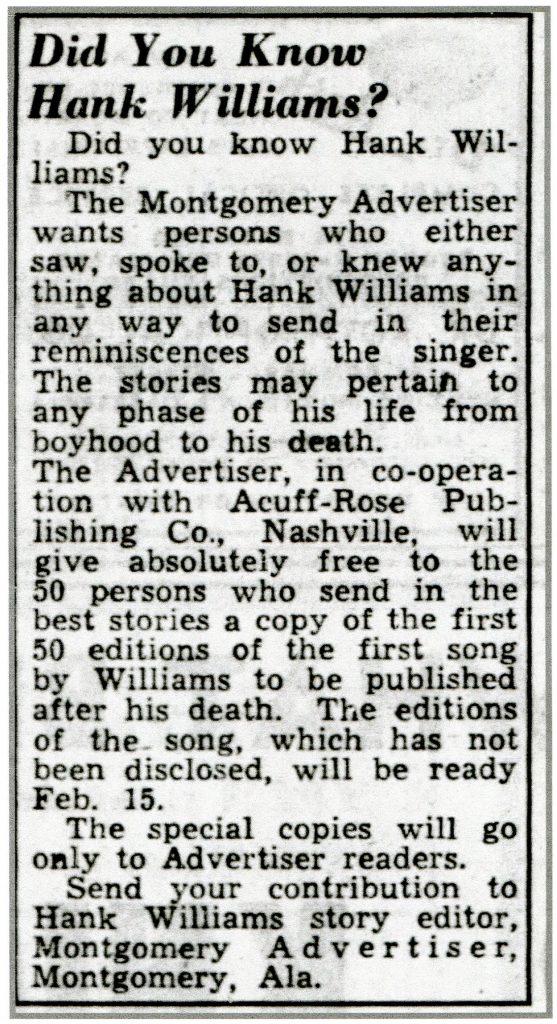 On January 7, 1953, The Montgomery Advertizer ran a human interest piece on Williams that included a request that people who knew Williams or had some encounter with him at any time in his life write to the Editor and tell their story. Within the hour phone calls and messages (even some written on napkins from the local diner) arrived in the newsroom. Within the next several days an average of one thousand messages a day were left on the Editor’s desk.

. . . Dr. Henry Lyon, who preached Hank Williams’s
funeral, has refused to allow his sermon to be placed
on records. “I would not accept a cent for preaching
this funeral, and I will not allow any person, regardless
of who he is, to commercialize on this funeral in any
way, as far as I am concerned.”

Vicious rumors that Dr. Lyon received a fabulous fee
for his services are absolutely untrue, as he did not
want or receive a cent.

The crowd of 20,000 mourners that gathered at the Municipal Auditorium was the largest funeral ever held in Montgomery, Alabama. There was standing room only inside the auditorium and thousands more in the street out front. People came from everywhere, dressed in their Sunday best with babies in arms, hobbling on crutches and canes, wrinkled faces of old men and women. Thousands with handkerchiefs pressed to faces filed by the casket. They paid their respect to a fine and loved American.

Kaya Fellcheck is an optometrist by trade and has practiced her profession in England’s Lake District for nearly four decades. Soon to be retired, Kaya intends to come to America to visit the graves of Hollywood movie celebrities whose photos she has collected.
PrevPreviousMr. McMix’s House
NextA Story from Postcard Genealogy and the Value of Space-Savers in Your CollectionNext
2 Comments
Oldest
Newest Most Voted
Inline Feedbacks
View all comments
Jim Tigner

We will never know what happened way back then. The Burger Bar is still there in Bristol. Its just a little hole in the wall but the coffee and french fries are good. They have a wall with some old newspaper clippings and faded photos of Hank on it.

my surname is Cardwell and do have family from Va, N.C., Tx, Ala & Tenn also Kentucky when I’ve done my ancestry there was some who went to Tenn in early 1800’s they went to gainville also there’s a Cardwell Mountian is Mcminneville Tenn would like to know who is Dr P, H, Cardwell parents name are.