Many of us who are older than the Baby-Boomer generation, re-live our childhood through a collection of short stories. One of my favorites is the story of my friend Nancy’s fascination with Mr. McMix’s house.

One day when Nancy was five years old, her mother was fussing around the house, completing plans for a trip into town. Several errands were on her To-Do List, but the whole trip would take less than an hour. When her mother was about to leave, she turned to Nancy and asked, “Would you like to come with me or stay home with Grams?”

Nancy made her decision instantly, but it was conditional. If the trip were to include a ride by Mr. McMix’s house, she would go. Otherwise, she would stay home.

“I don’t know who that is,” said her mother.

“It’s the big house on the corner, the one with a clock and a bell, and the big columns out front. They even have a flagpole. They have their name – McMix – over the front door.”

“I’m sorry, honey, I have no idea what you’re talking about.”

In spite of the confusion, Nancy agreed to go with her mother in hopes of seeing the marvelous house she liked so much.

An hour later, the errands were finished, but Nancy had yet to see Mr. McMix’s house.

“Where?” her mother asked.

“Nancy, I just don’t know where to take you, I have no idea what you’re talking about.”

The tears of disappointment came to Nancy’s eyes, but within a couple minutes, as her mother drove their blue 1950 Plymouth up the West Broad Street hill, she saw the wonderful place that she had always hoped would be her home one day.

The instant Nancy saw her dream house, she pointed and screamed, “There it is; that’s Mr. McMix’s house.”

Her mother smiled and pondered what other people, places and things were hidden away, with such secret delight, in her daughter’s phenomenally creative mind. 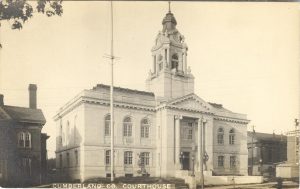 The Cumberland County Courthouse in Bridgeton, New Jersey, built at the direction of the County Board of Chosen Freeholders, was to accommodate the county government offices, the sheriff’s office, and the county court system. The bell tower was to hold the Cumberland County Liberty Bell and a four-faced Seth Thomas clock.

When the facility was opened to the public, the sheriff worked from the east (left, facing the front) wing of the building, the county offices used the west side, and the court system used the entire second floor (complete with two fully furnished courtrooms). The county jail was in the basement.

A cornerstone was put into the northwest corner of the façade and the twelve-foot wide, granite transit plate over the front door had the date of completion (1909) chiseled into it as a Roman numeral: