In some parts of the world, mostly English speaking countries, a pattern of interlaced stripes is often mistakenly called a “plaid” instead of a “tartan.”

In Gaelic, plaid is the proper word for a blanket. When used in a context speaking of Highland Dress it refers to a length – usually 27 feet* – of material. Originally a kilt was known as the “belted plaid” and consisted of cloth that was gathered and belted at the waist. The belted plaids were most often made from a tartan cloth, and so the confusion between the two terms is understandable, but now no longer since you know the facts.

Tartan has an ancient history. The earliest tartan in Scotland is thought to have been created in the fourth century. In other parts of the world, tartan cloth may be dated to circa 2000 BC. Every place cloth was made on looms, weavers created tartan designs, but nowhere other than in Scotland have tartans acquired such significance.

It all started in August 1746. After the April 1746 Battle of Culloden, an English victory that sent Charles Edward Stuart (Bonnie Price Charles) packing for the highlands, the British government, in the Act of Proscription (also known as the Dress Act), forbade the wearing of tartan in the Highlands. It attempted to suppress the rebellious Scottish culture.

The Dress Act was repealed in 1782 and by the end of the eighteenth century large scale commercial weavers were in full production of tartan. The most notable was William Wilson & Sons of Bannockburn. In the 1819 Wilson’s Pattern Book over 250 tartans are included, but only a hundred (+/-) were given names. The 250 were not only Wilson’s designs, but patterns that Wilson had collected from all over Scotland.

By mid-century, the legend became a reality that the Wilson names borne by the tartans represented actual connections to those clans. Interest grew and legend blossomed through to the late 1890s when it was assumed that tartans had always been named and these were the names blessed by the clan chiefs.

Today tartan patterns can represent not only clans, but towns, businesses, and social or military organizations, thus, there are well over 7000 unique tartans on record.

If your name is Campbell, Gordon, Fraser or any one of more than forty Scottish Clan names, you may find your family’s tartan on a Tuck Postcard. Between 1908 and 1912 Tuck & Sons published 42 different cards in seven sets of six cards each. If you are your family’s genealogist, your story is not complete until you find your Tuck Tartan.

A checklist follows that will aid in collecting these Tuck cards, but there are some caveats that are explained. Please use this list as prescribed below, it has been requested; therefore it has been researched as thoroughly as possible for presentation.

This checklist has been compiled from three different sources: (a) an article that appeared in the September 1985 issue of the Postcard Courier by an unsigned author, a page from an Internet website entitled Scottish Tartans Authority where credit is given to Jamie Scarlett as the collector of the images displayed on the site, and the Tuck Database web site.

The clarifications: errors were discovered on all three lists. It may be superfluous, but let’s list the problems for new collectors.

On list (a) an entry for MacGeorge appears, but none for MacGregor.  MacGeorge is completely absent from both of the other lists. I therefore assume MacGeorge is a typographical error and I have ignored it because no card has been found with that name.

On list (b) none of the 34 cards listed are aligned with a series number or a set number.  This oversight makes list “B” nearly worthless.

List (c) the Tuck Database is most helpful in correcting errors found on the other two lists; however, only three of the seven sets (18 of 42 cards) are illustrated. Most egregious are the spelling errors, i.e., Sutherland is spelled with an ‘o’ and McNeill is spelled with just one ‘l’ which made both un-searchable. 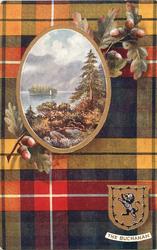 Special notice is here offered with reference to the six cards in Series VII: each has a vertical format (see example left); all 36 of the others are horizontal.

Kaya Fellcheck is an optometrist by trade and has practiced her profession in England’s Lake District for nearly four decades. Soon to be retired, Kaya intends to come to America to visit the graves of Hollywood movie celebrities whose photos she has collected.
PrevPreviousHuyler’s Candy Company Postcards
NextIntroduction to a Series Poster Postcards Part INext
3 Comments
Oldest
Newest Most Voted
Inline Feedbacks
View all comments
Mary

This is fascinating. I will now never use plaid where it does not apply, I will use tartan.
Thank you.

Hi there! I have 33 of these which came from a hug postcard collection of my grandfathers – I also have a Douglas which doesn’t appear on the lists above. Do you know of any collectors who might be interested in them?

How much would you be interested in selling them for?