INTRODUCTION TO A SERIES POSTER POSTCARDS – PART I

The 1928, The New International Dictionary of the English Language defines “poster” as a bill or placard often of a descriptive character intended to be placed in public spaces. Many would agree that since the late 19th century, the poster is the most popular form of wall art in the world. In every kind of space, public or not, from churches to the halls of congress and from hospitals to classrooms, and bedrooms, the harsh reality of bare walls has been eased with posters.

Posters serve a myriad of purpose. They inform and remind us. They advertise and advise us. They entertain and amuse us. And, they sometimes offend and annoy us. Posters are both historical and current. Sacred and secular. Political and civil. Hopeful and depressing.

In our world of postcards there is a genre of postcards showing poster art, the vast majority of which are highly collectible. It would presumptive of anyone to select a dozen or so postcards and tell the world these are the best you’ll find, but that is exactly what I would like to attempt.

In the upcoming weeks, in this space, poster style postcards will be found with their stories. You may assume that some of the most beautiful art and an equal amount of the most dreadful art appears on posters. Either way you think of the art is fine; enjoy! 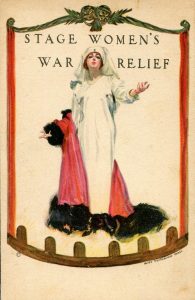 Stage Women’s War Relief was a completely volunteer organization in New York City that formed near the beginning of World War I to organize projects taken on by the women who work in the theatre industry. Generally they raised desperately needed funds to purchase hospital supplies and clothing for our American Expeditionary Forces in Europe. Among their fund raising projects were Liberty Loan drives and performances for sailors and soldier on leave in New York City. 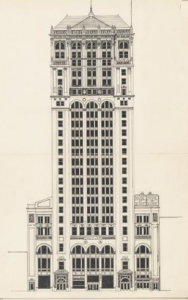 One of the most successful events was the night, “When Broadway Favorites Saw Themselves As Others See Them.” This event was held in the projection room of the Candler Building at 209 West 42nd St. It was the night that the audience saw movies of stage performances that until them were considered “lost.” As reported in the March 1919 Theatre Magazine, (a very high-end publication of the era for American Theatre enthusiasts) Daisy Humphreys herself could have been accused as having stage freight for in all of her career she had no occasion before this to see herself on film.

Daisy Humphreys was the National Chairperson of the Press Department. As a very accomplished actress in London and Paris, Miss Humphreys found herself working in New York at the outset of the war and without hesitation joined the efforts of the relief projects. It is she we thank today for archiving the organization’s correspondence, music, play scripts and records. As an organization official she maintained copies of programs and magazines that contained not only her own career profile but that of hundreds of others working in New York, London and on stages throughout France.

The SWWR’s primary expression of where and when their events would occur is the poster on the postcard here. You may not know the artist’s name, but you certainly know another piece of James Montgomery Flagg’s work. 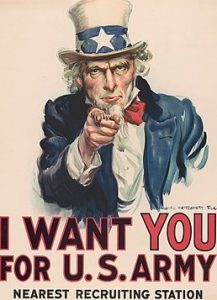