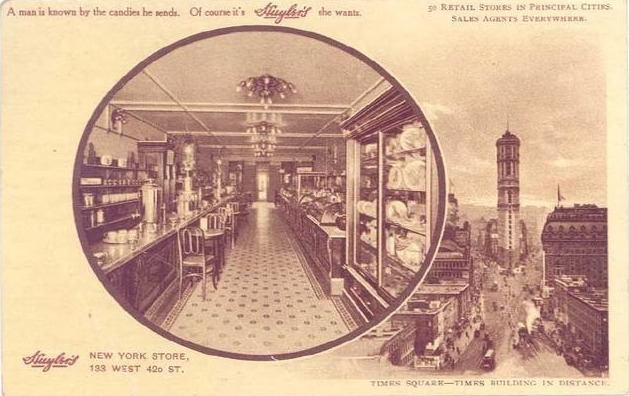 When John S. Huyler died just after eight o’clock on the morning of October 9, 1910, the question on the minds of many who knew him was, “What was he worth?” Huyler was a quiet man when it came to personal affairs. He spoke little of his accomplishments and even less about his vast fortune. Nevertheless, there was no doubt that he was a savvy and shrewd businessman who used his business skills and his work ethic to become one of New York’s richest men.

The New York Times estimated his estate to be an amount between ten and 25 million dollars.

Huyler was born in 1846 into the Greenwich Village family of David Huyler, an immigrant baker who supported his family from a shop that also served as their residence.

According to family legend, John found hundreds of confectionary recipes while doing some work for a neighbor. The idea of making candy fascinated him and in 1874, he opened a small candy and ice cream shop near the corner of 18th Street and Broadway in Manhattan.

It is unknown when John Huyler married Rosa Lee but it is likely to have been around 1880.  They had five children; a daughter who pre-deceased her father, and four sons: Frank, David, Coulter, and John, Jr.

Little is known about David and the same is true of John, Jr., who died mysteriously after his father and before reaching his 21st birthday. It was on the day that John died that the family began its efforts to divest itself from the company. Within a few months, Frank and Coulter struck a deal with Benjamin DeKlyn, one of their father’s business associates, for stockholdings that would give the family sole discretion over the company “when it came time” to sell.

Oddly enough, that time did not come until 1925. The family decided to continue the philanthropic work for which John had been famous. Throughout his life, John sponsored dozens of projects in New York’s Methodist churches. He was also active in Christian Alliances and neighborhood missions. It was common knowledge that his annual charitable contributions exceeded $150,000.

However, even the best intentions are often dissected in the society pages of the newspapers, and the Huyler family was no exception.  Many of the city’s gossipmongers berated Rosa for her re-marriage and for the fact that she took $390,000 from the Huyler Family Trust and bought herself a new up-town house.  She lived at 1 West 72nd Street until her death.

John Huyler was a man who knew the value of having contacts.  He was a member of three New York area golf courses and both the Rye and Larchmont Yacht Clubs.  Through his affiliations with banks, chambers of commerce and Methodist churches throughout the city, he knew thousands of New Yorkers.

Huyler recognized the value of advertising and had early on decided to use and distribute trade cards carrying the Huyler name. He also realized that postcards were another way to promote name recognition and to encourage new clientele to visit his stores.

The company commissioned two very different sets of cards.  The first set went into circulation circa 1906.  They were well designed and used a common advertising scheme of juxtapositioning a New York City landmark with a photo of a Huyler Candy Store. The set enjoyed wide popularity and included the view seen above, the Times Building, along with the Museum of Natural History, the Grace Church, New York’s Viaduct along Riverside Drive, the New York Public Library, and St. Patrick’s Cathedral. Today these cards are valued at between $6 and $8.00.

A second full-color set carried a copyright date of 1909.  Again, a common advertising scheme made the cards popular. Each one had an outlandish comparison used in a way that introduced Huyler’s candy making processes to the public.

In the example below, the suggestion is made that if the wrappers the company used were compared in weight to two dozen 9,000 pound elephants, the wrapper would be heavier. 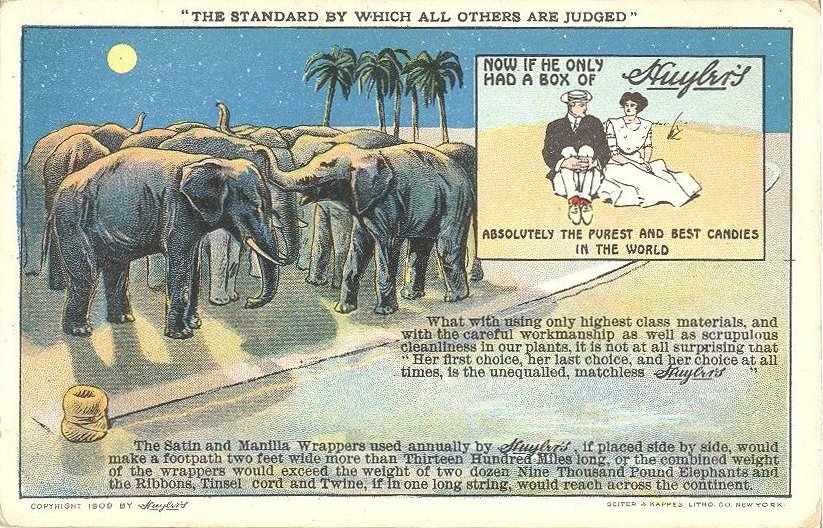 … if he only had a box of Huyler’s

On this card below, we learn that if Madison Square Garden was filled with baskets of nuts piled two deep, that quantity would not equal the number of Brazil nuts, pistachios and walnuts used in making Huyler’s world famous chocolates and bonbons. 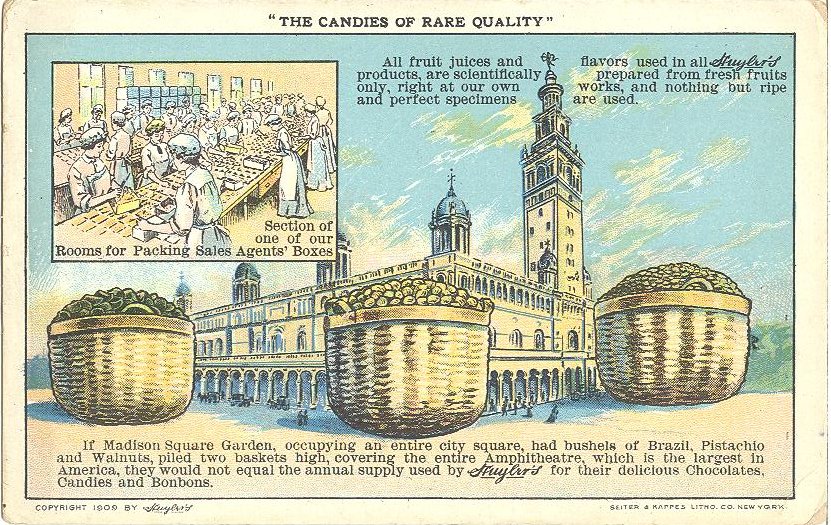 … one of our rooms for packing … boxes

At least 43 Huyler advertisers have been identified. Prices range between $8 and $12 each.

Special thanks go to Hy M. and Bob S. for their help in preparing this article.  Both eagerly shared their knowledge and their collections of Huyler postcards.  Hy even prepared a combination checklist.  If you would like a copy tell us by leaving a comment, we will make arrangements.

I’ll be on the lookout for Huyler’s cards if I ever start attending postcard shows again.