Postmarked New Orleans
by Jason N. A. Smith : A Review 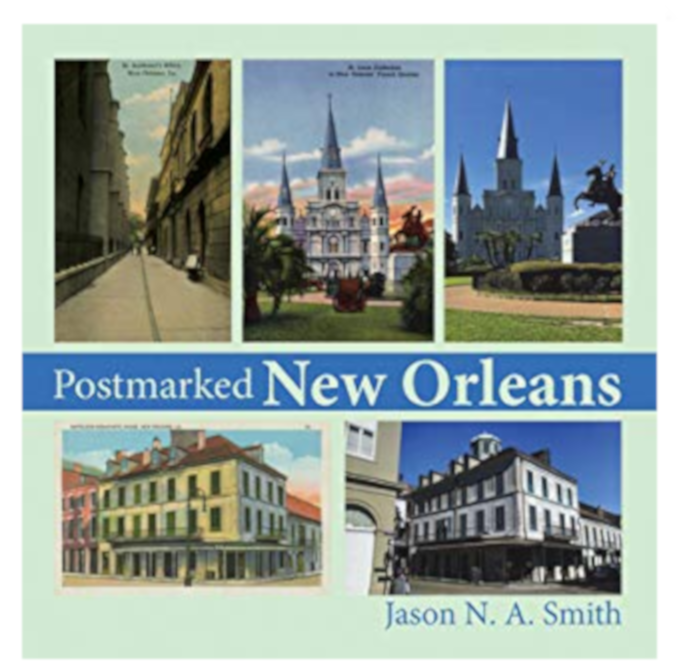 Postmarked New Orleans is a tantalizing general non-fiction book that joins the ranks of many other titles in the “Then and Now” genre. Cities that come to mind where such titles have enjoyed unending popularity are London, Paris, New York and Williamsburg, Virginia. Photographs and postcards implore comparison. Postcards being the then; photographs being their echo in the now, but not always successfully. Most readers of such books look for the similarities from ago and hope to see something similar in the present. Most times the reader is pleased because he/she finds history in the extant.

New Orleans is a city well presented in the postcard world, but in very limited arrays. A few of the standards (Absinthe House, St. Louis Cathedral, the old French Market, the Chalmette Monument and St. Anthony’s Garden) seem to appear is all the renderings, but Mr. Smith has expanded his collection far beyond expectation.

Artists the likes of R. W. Metre, George Bohland and Louise Sarrazin have all done pen and ink drawings of New Orleans that equal, in every way, modern photographs, but the author has declined the use of these wonderful postcards except for Bohland’s Fountain in the Two Sisters Courtyard.

It may go without saying, but it should be suggested that the postcards in nearly every case in Mr. Smith’s book are more appealing than the photographs. His selection is astonishing complete and very well categorized with The French Quarter and Restaurants, Bars and Hotels shown in Chapters 1 and 2; while Chapters 3 and 4 contain St. Charles Avenue and Canal Street and Parks and Cemeteries.

The author’s brief descriptions of the sites and neighborhoods in New Orleans seem to be loving narratives of memories long held and deeply cherished. As a reviewer, I would like to have seen just a bit more social history, but Smith has done a thorough examination of the city’s history and architecture. And his work is well done!

Those who are true to the city, may I coin the term NOLAphiles, will want to add this charming book to their libraries. Hurry if you’re interested, the supply is low – Postmarked New Orleans is available at Amazon.com.