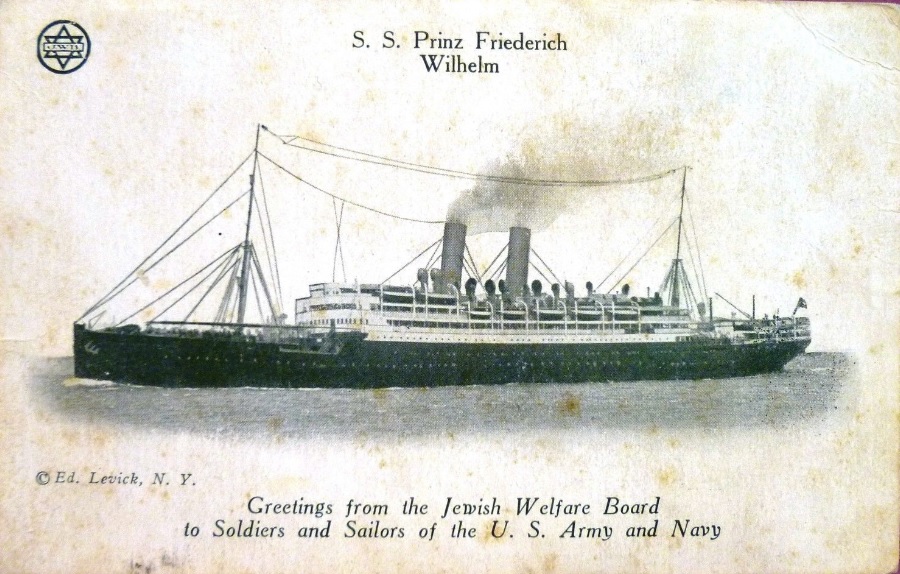 There are mysteries concerning this set of ship cards that may come to a resolution someday, but for now collectors and users of this checklist will be required to wait for a thorough and enthusiastic researcher to discover details which are yet to be common knowledge, e.g., publisher’s name?

As a whole, the cards were poor quality. They were printed on paper quite prone to foxing and absorption of dirt. The corners bump easily and it is nearly impossible to find them in mint, near-mint or very good condition. The condition of the cards may suggest that they served their intended purpose and came to the USA in a soldier’s or sailor’s pocket. Each card carries the logo (emblem) of the Jewish Welfare Board and the words, Greeting from the Jewish Welfare Board to Soldiers and Sailors of the U. S. Army and Navy. Some have photographic credits, of which there are four: Brown Bros., N.Y. Herald, Ed Levick, N.Y., and International Film Service. The reverses are generic divided backs. The captions – ship names – are 99% accurate, the only fault being one misspelling.

It is generally believed that the ship pictures were meant to aid in the identification of ships and to reduce confusion on both sides of the Atlantic. In Europe the ship photo would help the serviceman in boarding the ship to which he was assigned and here in the US it would help those meeting a ship make sure they were at the correct docking facility.

There are interesting facts about many of these ships; some are listed below.

* The Matsonia made eight round-trip voyages. In doing so, she transported more than 23,000 returning troops.

*** This Dutch vessel, chartered by the U.S. Navy, made five wartime voyages to Europe and later transported returning troops to Charleston, S. C.

## The Prinz FW performed troop transport from April to August 1919. She made five round trips from France carrying over 15,000 passengers.

There are interesting facts about many of these ships; some are listed below. Further insights are solicited. Contact: editor@postcardhistory.net. 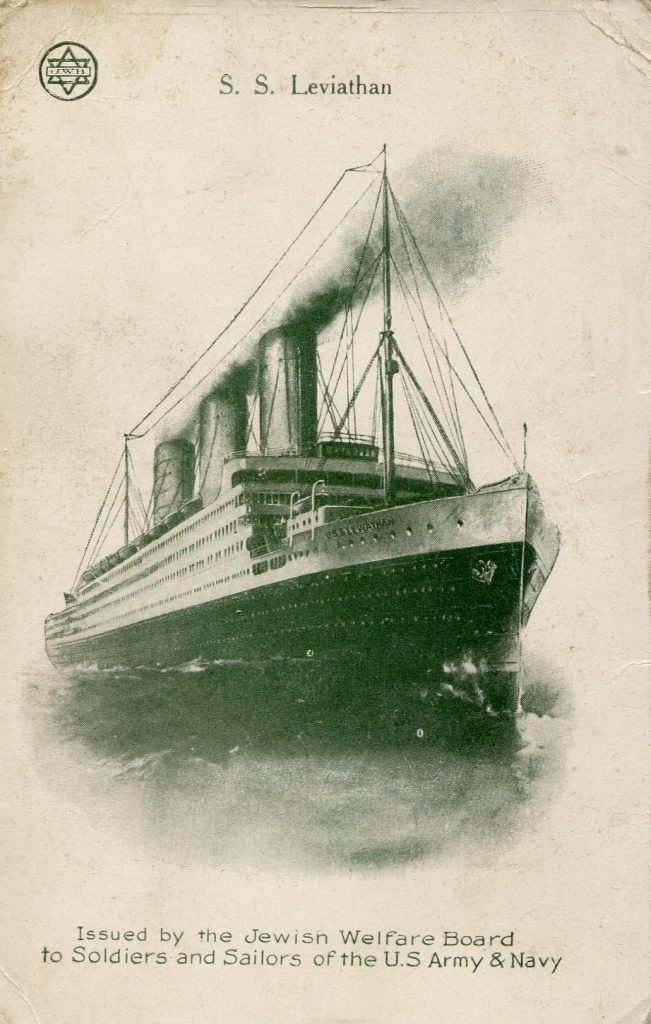 *S.S. Leviathan. Once owned and operated by Hamburg-America Line, this ship was seized by the United States Shipping Board when the US entered World War I. It was renamed S.S. Leviathan by President Woodrow Wilson on September 6th, 1917.

S.S. Mercury. Like the Leviathan, Mercury was also a German ocean liner operated by the North German Lloyd Line. When war erupted in Europe, Mercury took refuge in Hoboken, New Jersey, and was interned by the US until seizure on  April 6th,1917. 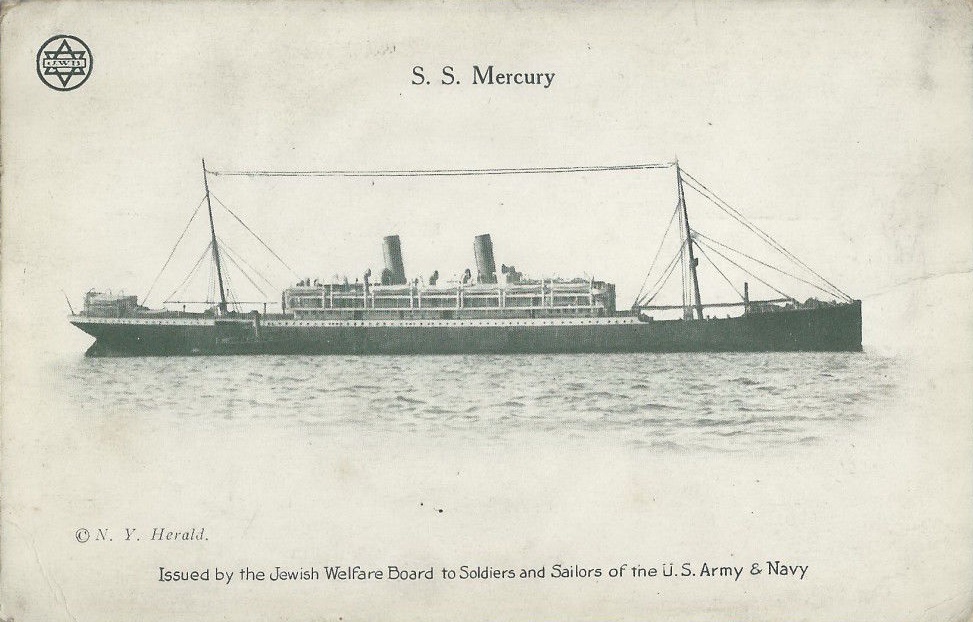 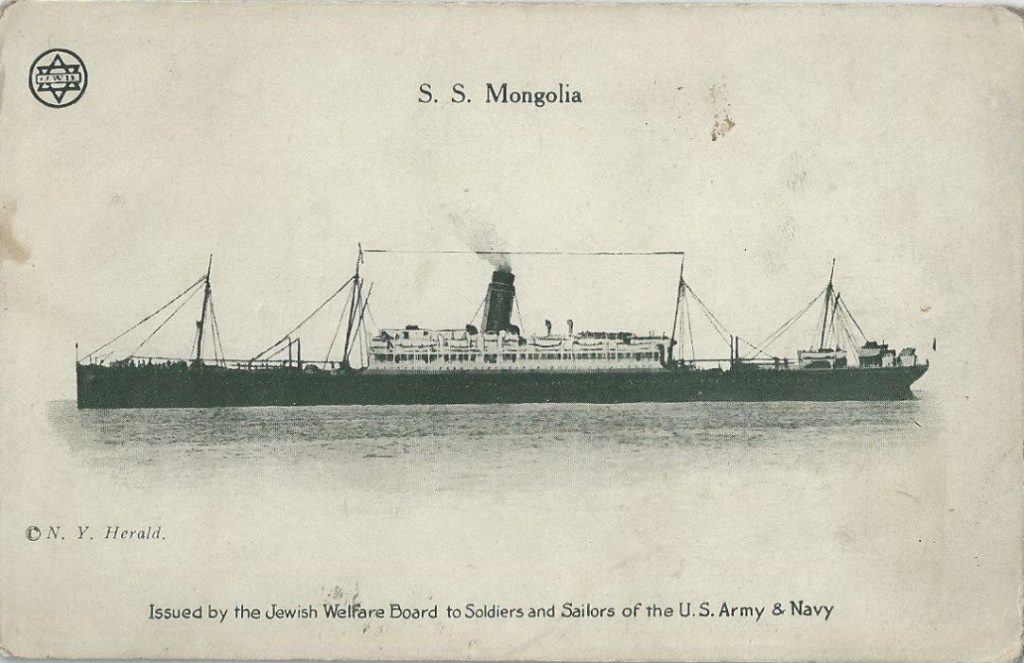 S.S. Mongolia. Mongolia was built at New York Shipyard in Camden, NJ and before the Great War sailed both the Pacific and Atlantic under three different names for three different companies. In 1917 it began trans-Atlantic troop transport and made twelve trips. Regrettably Mongolia has the distinction of being the only troop ship on which US Army nurses were accidentally killed when a fragment of the 6-inch gun’s propellant ricocheted off a stanchion during a weapons firing exercise.

S.S. Mount Vernon. The vessel here was a German ocean liner built for the North German Lloyd Line and named Crown Princess Cecilie. She left New York harbor on September 14, 1914 but turned into Bar Harbor, Maine, seeking to be interned by a neutral United State. In April 1917 the vessel was seized by the Navy, refitted for troop transport. She was torpedoed in 1918 but was able to make port. No lives were lost. 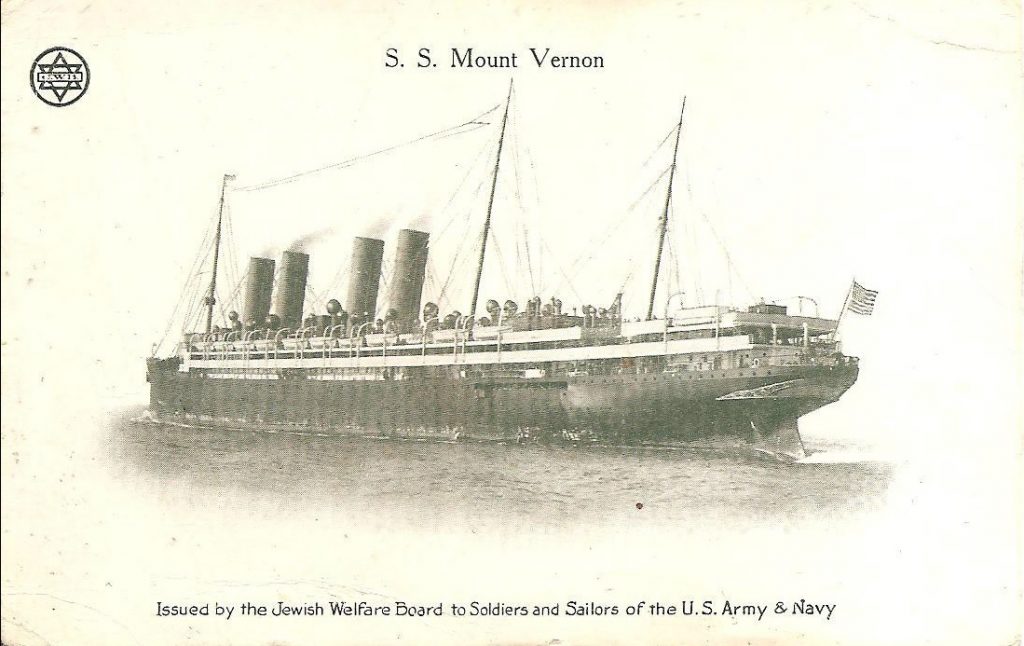 S.S. Patricia. Patricia was one of the oldest of the Navy’s troop transport ships. Built in Germany in 1899, Patricia made eight voyages from Brest, France to New York City. She carried 8,865 servicemen home beginning on March 30th, 1919. Patricia was decommissioned on September 13, 1919, with an unblemished record. Ultimately delivered to Ellerman’s Wilson Line for postwar service, Patricia and other ships like her were converted to fast steam cargo liners and used well into the late 1930s and early 1940s.

Ellerman’s losses during the World War II were extreme. German U-boats successfully sank 41 of Ellerman’s 105 ships and others were victims of air attacks, marine mines and surface raids.

* The Jewish Welfare Board’s card of the S.S. Leviathan is one of only a few in the set that appears in a vertical format.

Of great interest is the feature card of this article. It is the Jewish Welfare Board’s card of the Cunard Line’s S.S. Aquitania. It is truly an historical document in itself that was mailed on July 23, 1919 from Camp Mills, Long Island, New York. The soldier who mailed this card and the thousands of men and women who went to Europe between 1917 and 1919 to fight for the freedom of mankind were more important in American history than any series of postcards. 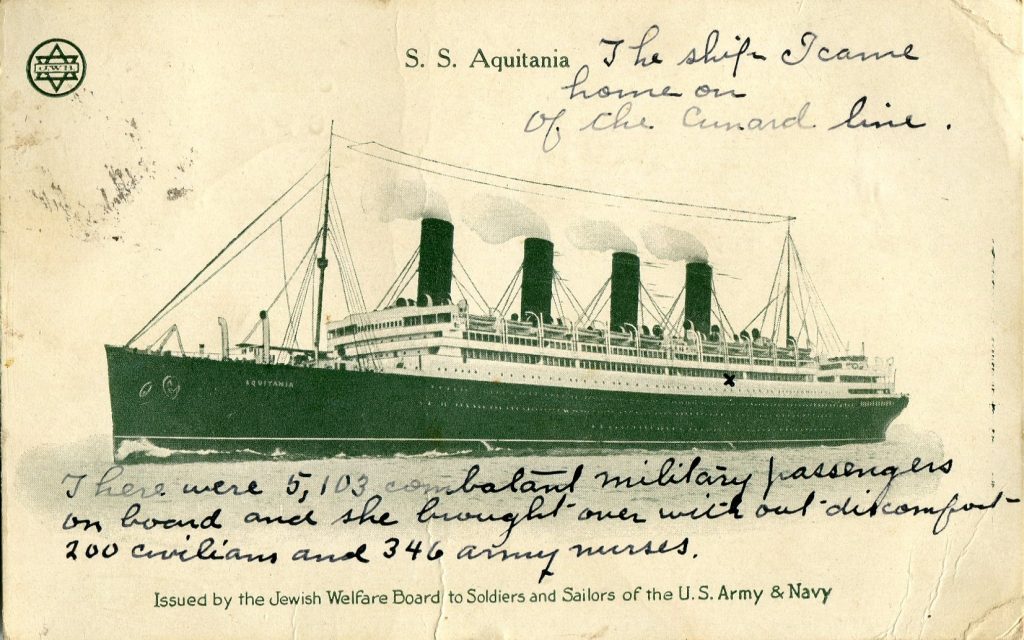 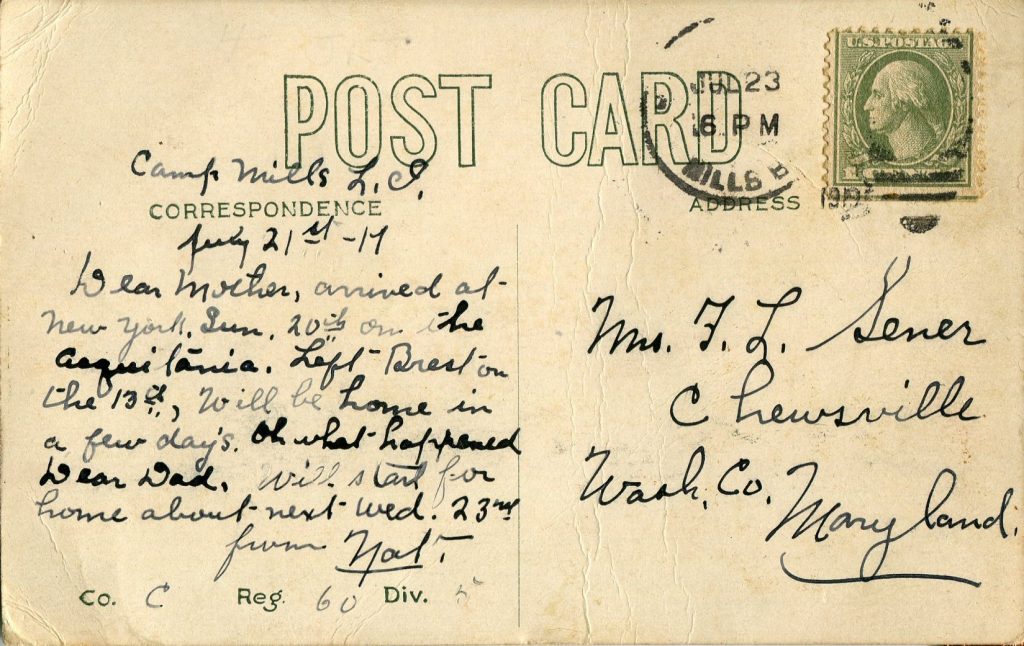 Nathanial Sener mailed this card to his mother in Chewsville, a suburb of Hagerstown in Washington County, Maryland. He wrote:

The Frederick Sener family lived on a farm along Smithsburg Pike (about seven miles east of Hagerstown. Fred married Nettie Rhinehart in 1893 and they had four children: Nathanial, Annette, Julia and Frederick, Jr.

Nat, the oldest (born on August 11, 1894), described himself on his draft registration card for World War II (age 47, signed April 27, 1942, and yes World War I veterans were required to register for the World War II draft) as having brown hair, standing 5’ 9½” tall, being 130 pounds with a ruddy complexion. As a member of Company C, in the 60th Regiment/5th Division of the American Expeditionary Forces, he served in France from May 1st, 1918 to July 19, 1919 (He wrote our featured postcard the next day). Federal Census shows Nat as a self-employed farmer in 1930 and as a W.P.A. (Works Projects Administration) employee in 1940. He never married. He died December 7, 1952, in Martinsburg, West Virginia; he is buried in Rose Hill Cemetery, Hagerstown, Maryland.

Nathanial Sener, who later in life spelled his name Saner, was a true to life average guy who lived his days in quiet distinction and can be seen as a perfect example of a God fearing American.

what a fascinating slice of history! I imagine they were poor quality because they were gotten out in a hurry for a specific purpose. Also, it was a nonprofit that created the cards and they were probably on a limited budget.

I have a website dedicated to these, and other troopship cards of the First World War:

Your website is terrific! So detailed in the WW1 area.

Thank you for the kind words. I have been studying WW I and related collectibles for many years. Hope you find the information useful.

Thank you for the very interesting article article.

Thank you for the very interesting article.