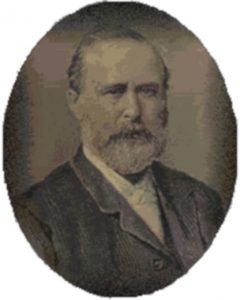 Stetson is a name most Philadelphians know. Nearly every Philadelphian I know has told me they had a member of their family or knew someone who worked at the Stetson Hat Company in north Philadelphia. At the August postcard show in Havre de Grace, Maryland, I found this card under the category hats. I had no idea who it was and when I asked, first I was surprised the dealer had an answer, then that the answer was John Stetson, inventor of the 10-gallon hat. I have since confirmed that information. The original was a tin-type, circa 1885, when he was 55.

I’m sure everyone has heard of 10-gallon hats. This is the story of the man who made them by the wagonload at his factory in the Delaware Valley.

John Batterson Stetson was born in Orange, New Jersey, in 1830, one of twelve children of Stephen and Susan Balderson Stetson. Stephen Stetson was a batter and since John was not a successful student, he left school to learn his father’s trade. The chemicals (mostly shellac) used in hat making did not go well with young John, but he learned his trade well, in spite of the fact that the business literally made him sick.

In an attempt to cure his sickness, his parents sent John to Colorado. Supposedly the clean, fresh air would cure him. That may well have happened but being in Colorado at a time when cowboys needed well designed, protective head gear, and his knowledge of hat-making, soon made John a very rich man. Stetson’s version of the 10-gallon hat was The Boss of the Plains. Estimates suggest that Stetson manufactured over 50,000 copies of that hat between 1865 and 1899.

Stetson returned to the East in 1865 and settled in Philadelphia and established a hat repair business at 7th and Callowhill Streets. His talent and personal policy to do good work at fair prices earned him a steady clientele and within a year he moved his shop to 4th Street, just above Chestnut.

In 1869 Stetson decided to hire a traveling sales staff. Within months he was forced to relocate his business a second time: this time to a quiet twelve acre site in the northeast. Eventually the Stetson complex held several five or six-story brick factory buildings that had automatic sprinkler systems, fire extinguishers and other safety devices seldom seen in factories of that era.

In addition to the factory buildings, there was the Stetson Hospital, the Stetson Library, and a place that Mr. Stetson called his neighborhood parlor. The parlor was large enough to accommodate two thousand people and each Saturday night an orchestra was hired for dances. Stetson also provided on-site facilities for religious services, social gatherings and family parties. (Interestingly, the Hospital was a fee-for-service operation, staffed by the most highly skilled physicians and nurses available. The fee was one dollar for three months service – regardless the size of the family.)

Also unheard of at that time was the practice of offering apprenticeships and paying above scale wages and giving annual bonuses to employees who had achieved special levels of competence and skill.

The legend and lore that surrounds John Stetson would have us believe he was saintly, even down to the fact that he made it possible for his employees to draw from the John B. Stetson Building Association, an in-house bank, which gave them below-market rate home-loans and mortgages. He was also an influential donor to the Philadelphia YMCA and many other Philadelphia charities were able to establish endowments based on Stetson donations. His generosity stretched as far as Florida; the DeLand Academy was endowed by Stetson after which the name was changed to Stetson University. No, they did not teach hat-making.

Stetson died in 1906. He is buried in the Ashland section of West Laurel Hill Cemetery in Bala Cynwyd, Pennsylvania.

Stetson’s son Henry ran the company until it closed in 1971. In 1977 the buildings were donated to the City of Philadelphia.