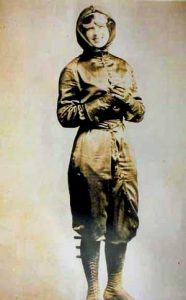 This postcard of Harriet Quimby was recently an auction item on the Internet website – e-Bay. It had a title: Harriet Quimby – Pioneer Aviatrix. Because of my woefully inadequate knowledge of aviation history, the card caught my attention and I knew at once that Ms. Quimby was my next research project.

On my first Google search I found several web pages devoted to her and among them were: www.findagrave.com, where, believe it or not, I found the same postcard as an illustration and www.harrietquimby.org, where I found some rather interesting biographical information.

Harriet was born in Michigan on May 11, 1875. Her parents, William and Ursula owned a small farm that was a constant financial drain and when the first opportunity presented itself, William Quimby moved the family to Oakland, California. Harriet started work in California as an actress, but soon abandoned the stage for a journalism career with the San Francisco Bulletin. Writing was a very profitable career for Harriet and by 1903 she had moved to New York City and was working for Leslie’s Illustrated Weekly. She lived independently and experimented with becoming a photojournalist.

At age 31, Harriet enjoyed her first ride in a racecar, and shortly afterward she purchased her own automobile and very much enjoyed writing articles on how single women could maintain automobiles. 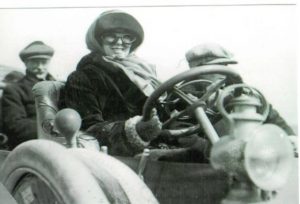 In 1910, an International Aviation Tournament organized at Belmont Park found Harriet Quimby in attendance. It was there that she met Matilde Moisant. Matilde’s brother Albert then owned and operated the only “other” aviator’s school in the US at Hempstead, Long Island, New York. (The aviation school she didn’t attend, the one operated by the Wright Brothers, did not accept women students). While still at the Aviation Tournament, both women decided to learn to fly. 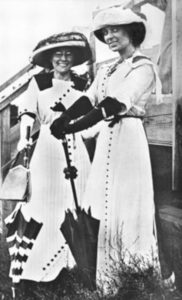 Quimby began touring with the Moisant International Aviators and performing at flying exhibitions. Knowing the power of performance, Quimby created a look for herself which became her trademark – a purple satin flying suit with a hood. With her tall, elegant looks, she instantly caught the public’s attention. She even chronicled her adventures in Leslie’s Illustrated Weekly.

Harriet Quimby’s career as a pilot lasted a mere eleven months, but she made an indelible mark on aviation history.

As a person always looking for new life challenges, she was the first woman to cross the English Channel by air. In March 1912, she sailed for England to meet Louis Blériot, a French flyer with a then international reputation. Quimby managed to convince Blériot to lend her a 50-horsepower monoplane for an attempt to fly the channel. While Blériot agreed to the arrangement, most everyone around her was convinced she would fail. Even her friend and instructor, Gustav Hamel, offered to disguise himself in her trademark purple suit, fly the plane for her, and then secretly switch places with her on the French side of the channel. Quimby refused.

On April 16 she departed for France in a plane she had never flown, with a compass she had just learned to use. Despite poor visibility and fog, Quimby landed 59 minutes later near Hardelot, France. Upon landing, Quimby was greeted with shouts by a cheering crowd and was hoisted upon the shoulders of residents. Quimby, however, would not receive worldwide acclaim – her story was overshadowed by the Titanic – it sank just four days earlier.

Quimby’s notoriety drew large crowds at public flying exhibitions, and tragically one of her largest audiences watched her die on July 16, 1912.

Harriet was flying in the annual Boston Aviation Meet near Quincy, Massachusetts for the hefty sum of $100,000. In her gleaming new Blériot Monoplane, Quimby flew out over Dorchester Bay with the event’s organizer, William Willard. As they were returning, the plane violently pitched forward, Harriet lost control and Willard was ejected from his seat. (Modern research suggests that the plane encountered an air pocket.) Seconds later, Harriet was also thrown out. Both fell to their deaths in front of the thousands who were there. Quimby, who had written about safety precautions in flying, was not wearing a safety belt. She was 37 years old.