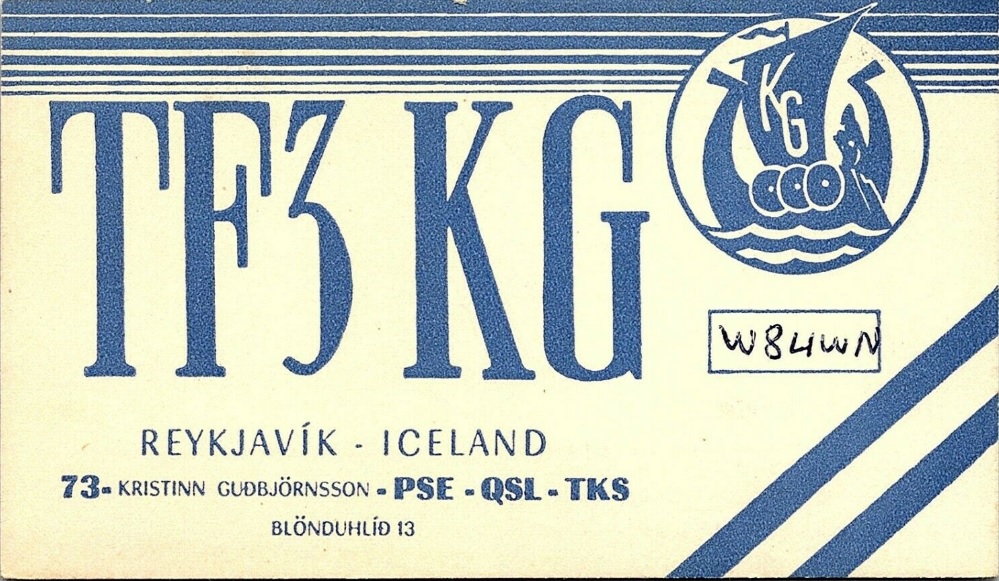 QSL cards are one of the mysteries of the postcard collecting hobby. Most people know about them, but few collect them. In many ways, QSLs are posters. They advertise one particular event. They inform only small audiences and they appeal to an even smaller cadre of collectors.

Most collectors have one or two simply because of a person, place or thing mentioned on the card. For this reason, I once purchased this article’s featured card simply because I once visited Iceland.

Whenever I see this card in my collection, I think of a day long ago at a postcard show where the following account of a conversation was over-heard.

I know it is rude, crude, and impolite to eavesdrop on other people’s conversations, but …

The scene. A postcard show sponsored by a postcard club. This was the first time for this show and the dealers who supported the event were pleased to be there. Both beginners and veterans were on hand to sell their cards and when I arrived – about a half-hour after the doors opened – the place was crowded with enthusiastic collectors.

The cast. Several dozen people, collectors mostly, some standing in small groups, others seated in front of the always familiar white cardboard boxes that hold hundreds of standard size postcards, and still others standing, with heads bent-down, chin on chest, looking through a pile of cards held tightly.

My role. Card collector. Shopper. Newsletter editor looking for interesting cards that will illustrate articles that I hope will interest every collector who reads my articles.

What came next. I sat down at the table of an old friend and asked, “Anything new that I can use for the newsletter?” This dealer has heard me ask this question many times and he is usually prepared for me. I am handed a fist full of cards and I sit, contented, looking for treasures. There is a man I don’t know sitting next to me looking at QSL cards. I thought to myself, egad, there really is someone who collects those cards.

Then another man walked up behind us both and asked, “What are those?” A hand reached between us and the left index finger was pointed to the cards in my neighbor’s hands. Gladly, I ignored the intrusion, but I couldn’t help but hear . . .

“They are QSL cards,” said my neighbor.

Neighbor: “They are cards used by ham-radio operators. Cards that confirm a radio transmission.”

“Yeah,” says the intruder, “but what does QSL mean?”

“What did you say they are used for?” asks the intruder.

My neighbor is now plainly bothered by the pesky questioner, so he replies, “Ham radio operators send them to each other to confirm receipt of a transmission.”

“Radio broadcasts. That’s all I know. I need to finish looking at these, I have to get to work,” says the neighbor.

“Okay,” says the intruder, “You don’t know much about what you collect, do you?”

“I guess I know more than you do,” retorts my neighbor who is visibly relieved when the intruder walks away.

And finally. I think, wow, I’m glad he didn’t ask me! I didn’t say anything – after all my neighbor had to get to work. I just hope he isn’t a radio-operator.