Postcards showing many classic television stars may be found at almost every postcard show. The cards remind us of people we miss. In this stroll down the memory lane of TV stardom, we’ll look back at some of the best.

At first, the idea of the very Latino Desi married to redheaded Lucy created controversy. Producers felt that Desi’s accent and Latin style wouldn’t be “agreeable” on American TV. The pair made a conscious decision to avoid ethnic jokes, as well as humor based on handicaps, and held to that principle—except when Lucy (and only Lucy) made fun of Ricky’s accent.

Showing a pregnant Lucy was controversial in the 1950s, so she was always referred to as “expecting.” Lucy was six years older than Desi, and in a time when older women being with younger men was frowned upon, both claimed to be the same age for several years.

Cuban-born Desi came into the world as Desiderio Alberto Arnaz III in 1917, and he was well known internationally as a Latin-music bandleader. His father was the youngest mayor of Santiago, Cuba, and his grandfather was an executive at Bacardi Rum. But during the 1933 Cuban Revolution, the family lost everything and escaped to Miami. From that time, Desi remained very much an American patriot.

Lucille Désirée Ball was born in 1911 in Jamestown, NY, and her family moved to Anaconda, Montana, then Wyandotte, Michigan. Her father died when she was 14, and because she remembered a bird getting trapped in the house that day, Lucy suffered from ornithophobia (fear of birds) all her life.

Starting out as a model in 1929, Lucy performed on Broadway, then began acting in movies in the 1930s. She had one of Hollywood’s longest careers, winning four Emmys and many other awards. In 1962, Lucy became the first woman to run a major TV studio.

In 1940, Lucy and Desi met and eloped. They had two children, Lucie and Desi Arnaz Jr. After a tumultuous marriage, plagued by Desi’s alcohol use and womanizing and by Lucy’s jealousy, they divorced in 1960.

Lucy bought out Desi’s share of their other “child,” Desilu Productions. Desilu was the first to film in front of a studio audience instead of broadcasting live and the first to have different sets adjacent to each other—the setup that became the standard for sitcoms. This foray into filming television shows was Desi’s shrewdest move, ensuring that Desilu would get profits from reruns, and was instrumental in moving the TV industry from New York to Hollywood.

Even though both Lucy and Desi remarried others, they stayed close friends for the rest of their lives. In his retirement, Desi raced thoroughbred horses, contributed to charitable organizations and taught classes at San Diego State University in studio production and television acting. He died of lung cancer in 1986 at age 69. Lucy never retired, making appearances up until the month before her fatal heart aneurysm at age 77 in 1989. 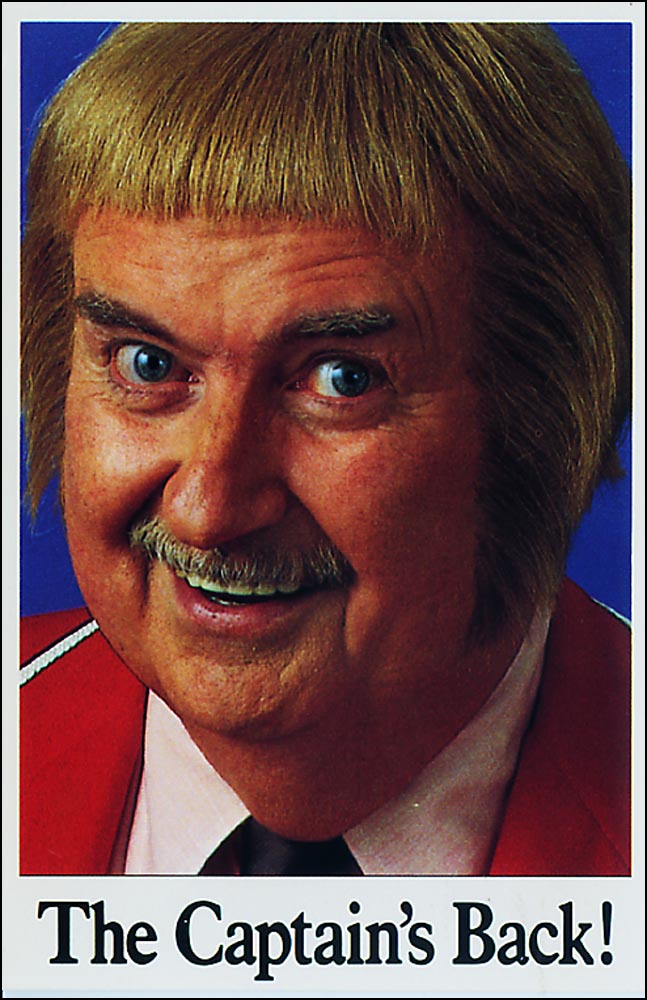 This postcard was issued in 1986, when “Captain Kangaroo” moved from CBS to public television. Published by School Zone Publishing, it was not widely available.

“Captain Kangaroo” debuted in 1955 and aired for 36 years, winning many awards, including six Emmys and the hearts of millions of children.

With his signature round face, sugar-bowl haircut and walrus mustache, the Captain walked through his Treasure House (later the Captain’s Palace) every day, chatting with characters such as Mr. Green Jeans, Mr. Moose and Bunny Rabbit.

Keeshan’s alter ego was named for his huge, pouch-like coat pockets. He was passionate about his family, which included all of America’s children, and chose an elderly character because of his feelings about strong relationships between grandparents and grandchildren. Born in Lynbrook, New York in 1927, Bob was a page at NBC Studios when he was in high school. He served in the U.S. Marines Corps, then created and became the mute, horn-honking Clarabell the Clown on the “Howdy Doody Show.”

After “Captain Kangaroo” ended in 1992, Bob continued in his role for public appearances and videos. He was also a children’s author and advocate, speaking and lobbying on behalf of children’s issues. In 1987 he co-founded Corporate Family Solutions, an organization providing daycare programs to businesses nationwide. Bob was not fond of violence in children’s programming and always stressed the importance of good parenting.

Bob Keeshan, the gentle, familiar grandpa we all wish we had, developed heart problems in later life and died in 2004 at age 76. 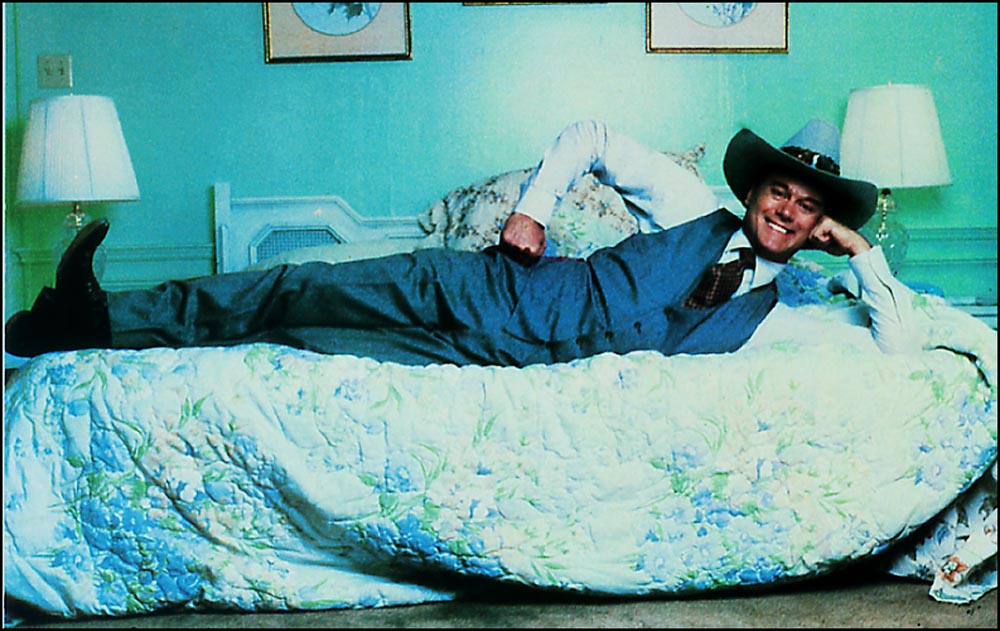 J.R. Ewing—the man we loved to hate—was played by Larry Hagman, shown here in his trademark cowboy hat. Published by Coral-Lee in 1981, this photo was taken by Annie Leibovitz, a well-known celebrity photographer.

Famous first as the sweet astronaut Anthony Nelson on television’s “I Dream of Jeannie,” which ran from 1965 to 1970, Larry Hagman was best known as the man we loved to hate, J.R. Ewing of “Dallas.” The nighttime soap-opera series began in 1977 and ran for 14½ seasons. The “Who shot J.R.?” episode is the second-highest rated television show in history.

Larry Martin Hagman was born in 1931 in Fort Worth, Texas. He was the son of a lawyer, Benjamin Hagman and actress Mary Martin (whose starring role in “Peter Pan” made it a television classic).

Larry followed in his mother’s footsteps, acting in regional theater and moving to England to be in the cast of Mary Martin’s stage show, “South Pacific.” After serving in the U.S. Air Force, where he produced and directed entertainment shows, his theater and television career took off.

In 1954, he met and married Maj Axelsson, a Swedish designer, and they had two children, Heidi and Preston. Larry loved riding Harley Davidson motorcycles, fishing, traveling and collecting hats and flags. In his off-screen, southern California life, his family motto was “Don’t worry. Be happy. Feel good.”

After years of strong drinking, Larry had a liver transplant in 1995. Then an avid non-smoker, he chaired the American Cancer Society’s “Great American Smokeout” from 1981 to 1992.

Larry was especially thrilled about the new “Dallas” series, which premiered in 2012. He reprised his “J.R.” role, along with several other original cast members. I can’t help but think he would have loved the way his death was worked into the plot: J.R. knew he was dying of cancer and successfully arranged his own murder in order to frame his archenemy, Cliff Barnes.

During the new version’s first season, Larry Hagman died in Dallas from complications of throat cancer at the age of 81. 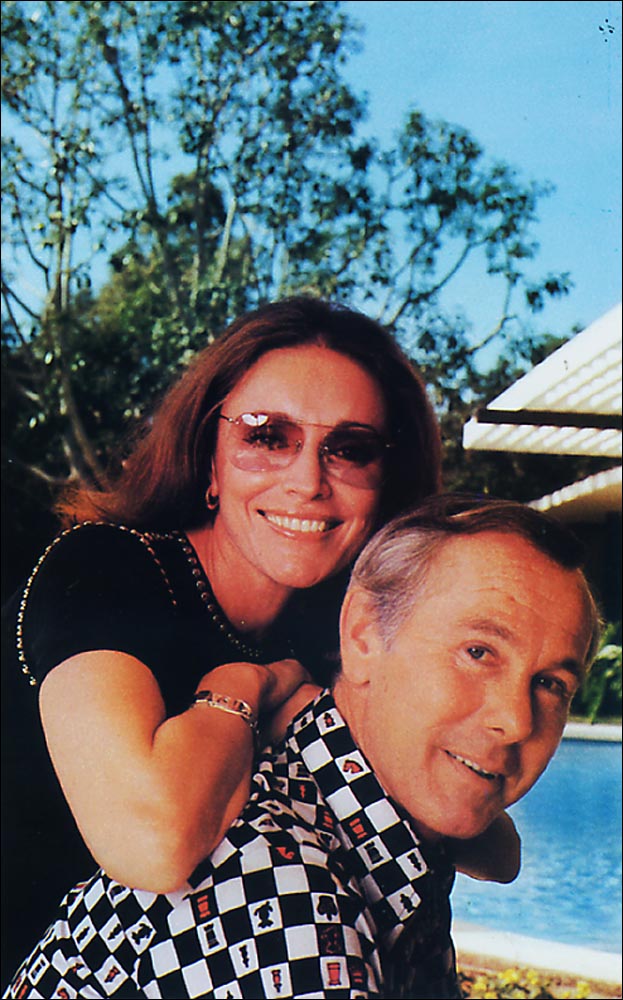 Shown here with his third wife Joanna, Johnny Carson was a shy man who became one of the most famous celebrities in the country. This 1980 photo was taken by prominent photographer Douglas Kirkland.

Comedian Johnny Carson was best known as the host of television’s “The Tonight Show” from 1962 to 1992. His calm, casual, conversational manner helped bring out the personalities of his guests, and he was awarded six Emmys, the Presidential Medal of Freedom and many other honors during his long career.

Other late-night hosts, include David Letterman, Jay Leno and Conan O’Brien, have credited Johnny for setting the format and tone for these types of shows. Johnny’s unforgettable characters included Carnak the Magnificent, the turbaned psychic who held answer-cards “hermetically sealed in a mayonnaise jar and left on Funk & Wagnall’s porch since noon today” to his forehead and dramatically answered questions before seeing them.

John William Carson was born in 1925 in Corning, Iowa. When he was 14, with the help of a mail-order magician’s kit, he became “The Great Carson,” performing at local picnics and fairs. He served in the U.S. Navy during World War II, and always said that the high point of his military career was performing a magic trick for US Navy secretary James Forrestal. Johnny continued his magic throughout college at the University of Nebraska, then started his broadcasting career in 1950.

“The Tonight Show Starring Johnny Carson” was famous for launching careers, especially those of comedians like Jerry Seinfeld, Ellen DeGeneres, Drew Carey and Roseanne Barr. Getting Johnny to laugh and being invited to his guest chair were considered the highest honors.

By the mid-1970s, Johnny was the highest-paid personality on television. According to the Peabody Award board, he had become an American institution, a household word and the most widely quoted American. His influence was so great that, when he joked about a toilet-paper shortage in 1973, nationwide hoarding and panic buying lasted for weeks.

An amateur astronomer, Johnny was a close friend of astronomer Carl Sagan. He enjoyed playing the drums at home, loved tennis and was a major investor in DeLorean cars. In 1981, Johnny started the John W. Carson Foundation, supporting children, education and health services. It’s the largest of the Hollywood charities and continues to this day.

Johnny was infamous for having many wives. His first, Jody Wolcott, was the mother of his three sons, Christopher, Cory and Richard. Their marriage lasted from 1948 until 1963, despite infidelity on both sides. After his divorce, Johnny married Joanne Copeland, who received a large divorce settlement in 1972. That same year, Johnny married former model Joanna Holland, who divorced him in 1983. In 1987, he married Alexis Maas, and their marriage lasted the rest of his life.

Johnny retired from show business in 1992, though he subsequently appeared for the occasional brief guest appearance. Even after retirement, he sometimes sent jokes to David Letterman and was tickled when Letterman used them. Always a heavy smoker, Johnny died of emphysema in 2005 at the age of 79.

Bonnie Wilpon is the author of Postcard History of Sarasota and Bradenton, Florida and Postcard History of Hollywood, Florida (published by Arcadia Books) and is a postcard dealer and collector in Tampa, Florida. She is Membership Chair of the Sunshine Post Card Club and a Contributing Editor for Postcard History. Bonnie can be contacted at: bonnpon@att.net.
PrevPreviousThe Civil Rights Movement and Its Anti-Communist Opponents
NextQuery Signal Level: [Acknowledged Reception Card] What’s that?Next
0 Comments
Inline Feedbacks
View all comments
0 0 votes
Article Rating
Menu