War in Europe and the fall of France to German Forces in 1940 resulted in many of the world’s luxury ocean-liners being sent to North America for safety sake. The scheme worked well and at one time the three largest ships in the world could be found at anchor in New York City’s Passenger Ship Terminal – Cunard’s Queen Mary and Queen Elizabeth and the pride of the French Line, Normandie. 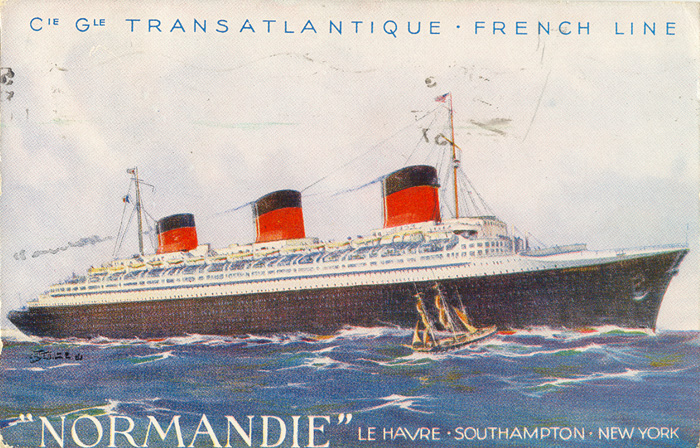 Immediately after the 1941 attack on Pearl Harbor, the United States Maritime Commission and the United States Navy seized the Normandie, and the Navy decided to convert it into a troop-ship and rename her U.S.S. Lafayette, in deference to the historical Franco–American alliance that first materialized in the 1770s.

On August 28, 1939, the Normandie, once the largest and fastest ship in the world, came to Manhattan’s Pier 88. As the conversion was well underway, on Monday, February 9, 1942, sparks from a welding torch set fire to piles of life vests (one account says bed mattresses) that had been stored in the dining room for the first-class passengers. The standard filling of 1930s era life vests was kapok, a highly flammable material, and because the woodwork had not been removed the fire spread rapidly. Normandie had a very efficient fire protection system but during the conversion it had been disconnected.

The calamity of the day was amplified by the fact that the Fire Department of New York hoses did not fit the ship’s metric intakes, thus the fire needed to be controlled by firefighters on shore and in fire boats. The process was not effective. Water was poured on the blaze for hours and by early morning on Tuesday the ship had developed a deadly list to port (when facing the bow, the left side of a ship) and just before three o’clock it capsized.

Financially, a case can be made that the fire on the Lafayette was one of the costliest and most shameful marine disasters of the war era. The fire-fighting methods used by the Navy, Coast Guard, NYC Marine Fire Service and the FDNY leadership bungled the job in such an embarrassing way that curtains were installed along the Hudson River from just north of 61st Street to just below 55th Street to block the view of the burned-out hull lying in the Hudson River mud.

Fast forward 18 months, all-the-while Lafayette, still on its side, and while millions were spent trying to right the vessel and repair the damage; the calendar turns to October 1943. The hull was finally upright again and towed to Brooklyn where workers were ready to continue the conversion. Then the unthinkable. In the Brooklyn Navy Yard, because of improper stabilizing, the hull capsized again, and this time seriously damaged the keel, most of the port-side plate-work and some of the intricate mechanical systems.

The war ended in May 1945 and at a time when there was no further interest in a conversion or even a restoration as a commercial venture, determinations were made that the costs could never be recouped. The French Line showed no interest in the project, therefore the once great Normandie was sold for a mere $161,680 to an American salvage company. What remained was scrapped in October 1946 in port at Newark, New Jersey.

More out of curiosity than anything else, I have asked some fellow ocean-liner postcard collectors how many different “Normandie” postcards they have. One friend, the obsessive, told me twenty-two, but the others said five, six and eleven. I have four. Enjoy three of them here: 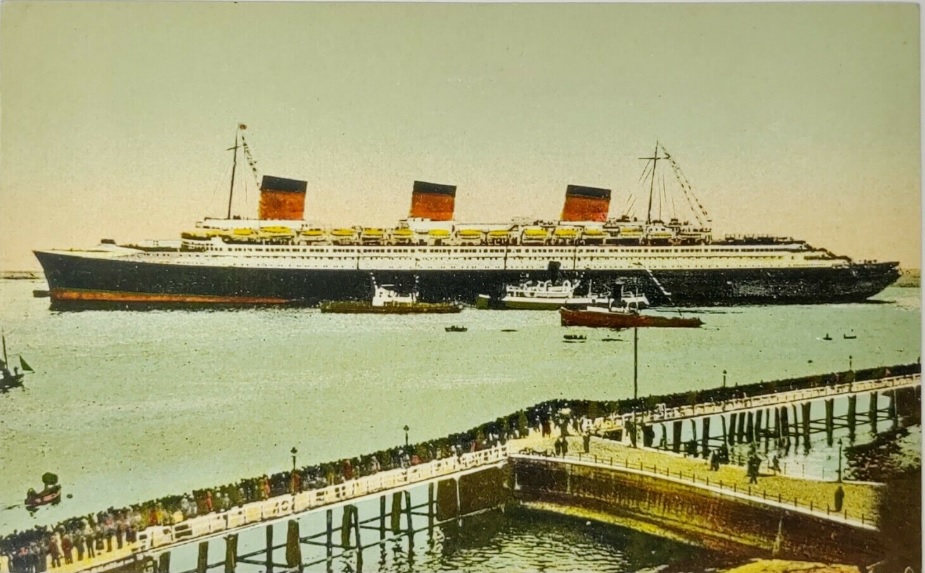 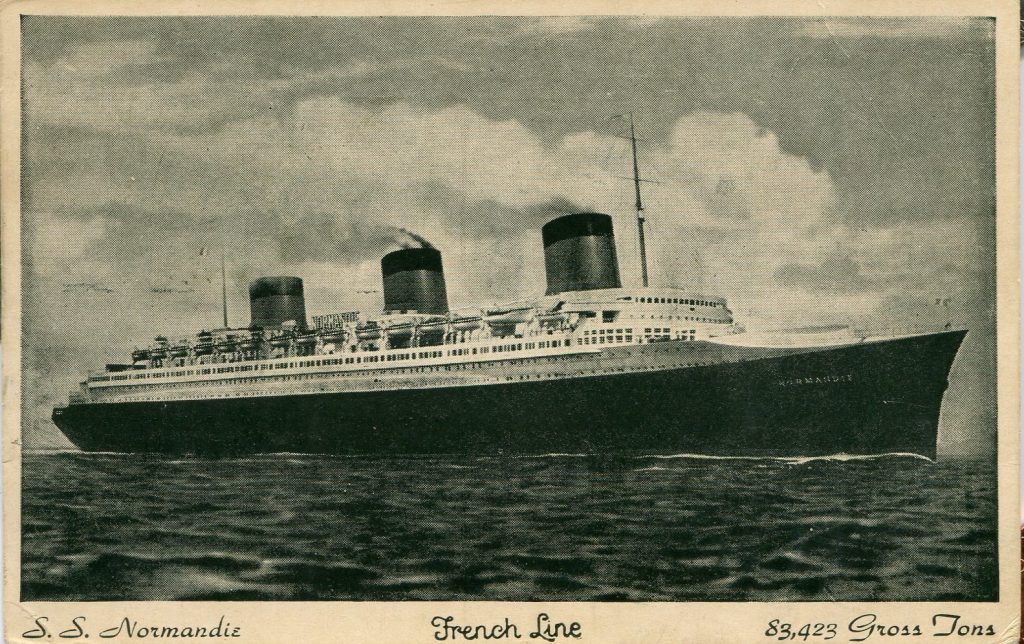 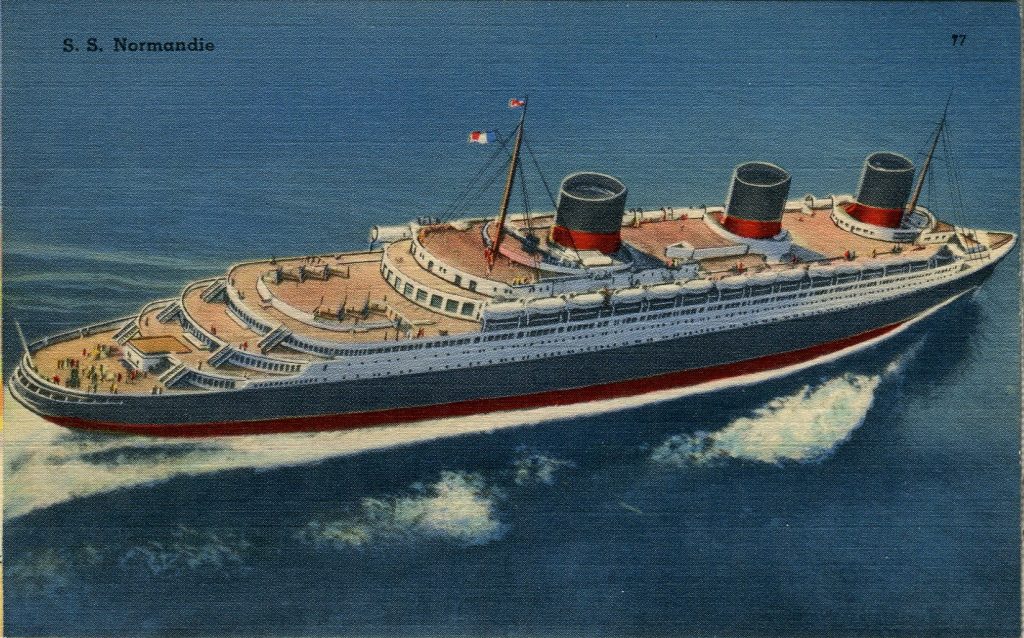 Hollywood sidebar: a shot of S. S. Normandie capsized and lying in the Hudson River’s mud makes a brief cameo appearance towards the end of Alfred Hitchcock’s film Saboteur. Watch closely, it lasts only a second or two. 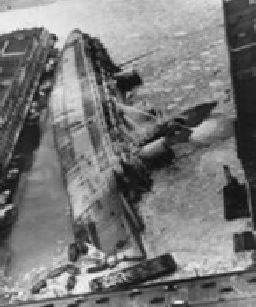 My Grandfather was working as a armature winder on this ship when it caught fire. Lucky he was topside when it happened. Normally he’d be in the engine compartment.