Few people today know about the “Great Race of 1908,” except what we remember from an outlandish 1965 movie of the same name starring Jack Lemmon, Tony Curtis and Natalie Wood. Forget about the movie; let me tell you the facts.

The Great Race was a once-in-a-lifetime, world class event sponsored by the New York Times and a sister newspaper in Paris, La Matin. The participants were teams of drivers/navigators from the USA, France, Italy, and Germany. The idea was quite simplistic – drive from New York City to Paris in the shortest time possible. The route, as determined by the newspapers, would be from Times Square in New York City to Albany, Chicago, San Francisco, Seattle, Valdez (in the Alaska Territory), Vladivostok, Russia; Omsk, Siberia; Moscow, St. Petersburg, Berlin, and then on to the finish line in Paris. 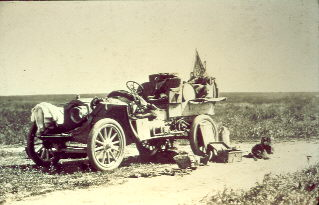 This postcard shows the car at a rest stop in the Nevada desert.

The American team won.  Known as the Thomas Flyer Team—named after the $4,000, 1907 Thomas Flyer car—they covered the course across three continents, traveling more than 22,000 miles in 169 days. George Schuster, Sr., was the driver of record and he still holds the world’s record. If you wanted to break Schuster’s record, you had to accomplish it before 6 PM, July 30, 2008 – the 100th anniversary of the team’s arrival in Paris. It didn’t happen so it is now too late. The New York to Paris record is now retired. 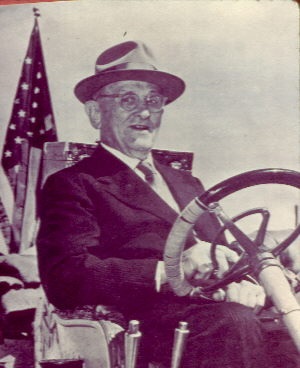 GEORGE SCHUSTER at age 92, still in possession of a valid driver’s license.

The German team was second, they arrived 26 days later. The Italians finished third on September 17, 1908.

The Thomas Flyer, model #35 was built by the E. R. Thomas Motor Company in Buffalo, New York. It weighed just under five thousand pounds and could travel at a top speed of 60 miles per hour. The engine had four cylinders and could develop up to 70 horsepower. The wheels were standard size for the time – 30 inch, balloon tube type.  The interior could seat the driver and three passengers, but needless to say, most space was used for fuel tanks and repair kits. 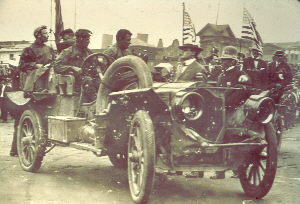 Naturally Schuster and his team were given a hero’s welcome home, ticker-tape parade when they returned to New York. Many race enthusiasts have wondered why Schuster was given the opportunity to drive the Thomas car in such an important event. The answer is simple; he worked for the Thomas Company. He started as a radiator maker, then a mechanic and by 1908 he was the Chief Road Tester for all Thomas vehicles, but Schuster wasn’t asked to drive in the race until the day before the start. He took a train to New York and arrived in Times Square just in time for the start of the race. The car was delivered to the Starting Line by the New York City dealer-representative of the Thomas Company. It was a showroom car with no special features. Schuster worked for Thomas until their last day of business in 1912 and then he moved on to the Pierce Arrow Company.  He lived in Springville, New York, until his death on July 4, 1972, at age 99. 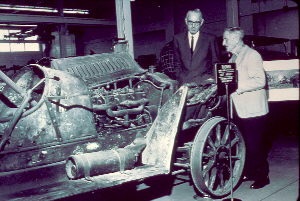 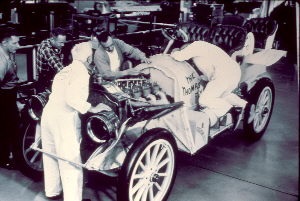 With George Schuster’s help the restoration of the car began and took several agonizing years. In 1964 the Thomas Flyer was purchased by William Harrah founder of the National Automobile Museum in Reno, Nevada. Today, the Thomas Flyer is on display at the museum. 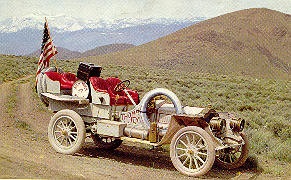 If you’re a fan of automotive trivia, you know there is a postcard of Tony Curtis, sitting in the driver’s seat of the Thomas Flyer #35 after its restoration. The restored car is still on exhibit in the National Automobile Museum.  Unfortunately, I have been unable to find a copy of that card.

A little-known fact about the Thomas Flyer: 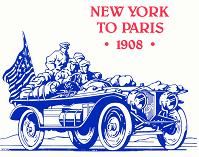 When the team arrived in New York, this postcard was given to anyone who wanted one. The image became the event’s logo and appeared on all E. R. Thomas Motor Company correspondence for over a year.