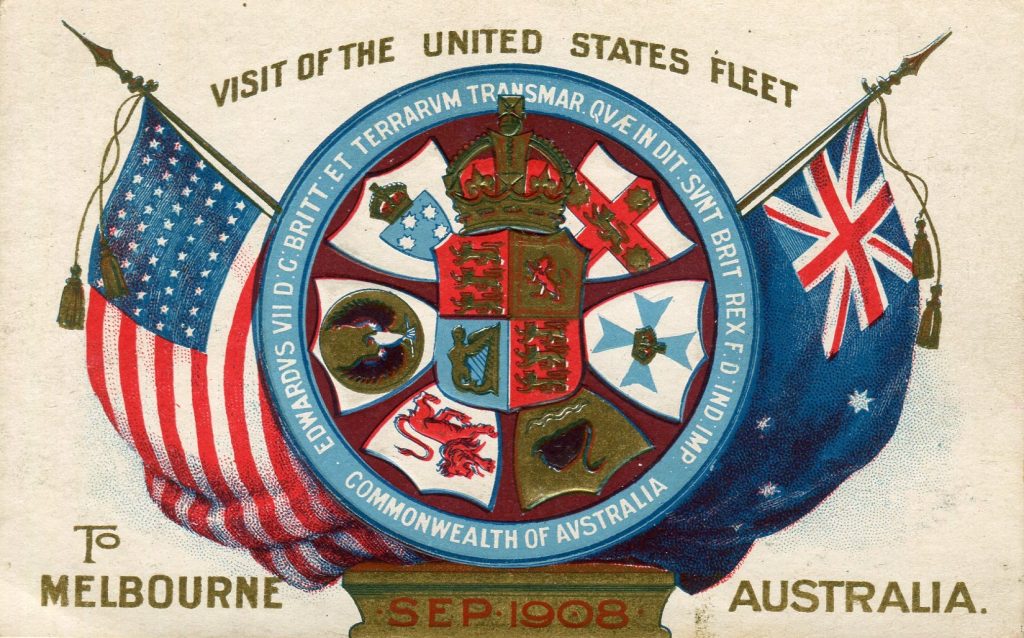 The year before President Theodore Roosevelt left office, he dispatched the U. S. Navy’s Atlantic Fleet on an around the world tour. Twenty-eight ships and 14,000 men left port in Hampton Ponds, Virginia for South America, Hawaii, New Zealand, Australia, the Philippines, Japan, Malaya, and back home through Suez and the Straits of Gibraltar.

One of the most celebrated visits in the South Pacific was in Sydney, Australia. On 20 August 1908 well over half a million Sydneysiders turned out to watch the arrival of the our Navy’s Great White Fleet. For a city population of around 600,000 this was no mean achievement. It was the largest gathering yet seen in Australia, it far exceeded the numbers that had celebrated the foundation of the Commonwealth just seven years before. Indeed, the warm reception accorded the crews of the 16 white painted battleships during ‘Fleet Week’, was generally regarded as the most overwhelming of any of the ports visited during the 14 month and 45,000-mile global circumnavigation.

One man undoubtedly well pleased with the visit’s success was Australia’s then Prime Minister, Alfred Deakin, who had not only initiated the invitation to President Roosevelt but had persisted in the face of resistance from both the British Admiralty and the Foreign Office. By making his initial request directly to American diplomats, Deakin had defied protocol, but he was also taking one of the first steps in asserting Australia’s post-colonial independence.

Feeling both isolated and vulnerable, it was easy for the small Australian population to believe that Britain was ignoring its antipodean responsibilities. The 1902 Anglo-Japanese Alliance (renewed in 1905), which had allowed the Royal Navy to reduce its Pacific presence, did little to alleviate these fears.

President Roosevelt initiated the deployment of the our Atlantic Fleet to the Pacific – the first such movement of great battleships – to test his Navy’s professionalism, arouse popular interest in and enthusiasm for the navy, and demonstrate that the United States had arrived as a world power. Roosevelt claimed publicly that the cruise was not directed against Japanese interests. Nevertheless, for most Australians the visit became an unmistakable expression of Anglo-Saxon solidarity. Unsurprisingly, the epithet ‘Great White Fleet’ only came into popular usage during the visit to Australia and referred as much to race as it did to paint schemes.

One question that is frequently asked when I encounter people researching their genealogy and their family’s military experiences is … What ships participated in the deployment? That answer follows:

The fleet was acquired from all branches of the Navy and included 16 battleships and 12 auxiliary vessels, including a hospital ship. In the first division were the battleships Connecticut, Kansas, Vermont and Louisiana.

The second division was comprised of the Georgia, New Jersey, Rhode Island and Virginia.

The third division consisted of the Minnesota, Maine, Missouri, and Ohio.

Fourth Division consisted of four ships the Alabama and Illinois, plus the Kearsarge and Kentucky.

It is unsure how many postcards designs exist that are devoted to this circumnavigation. The postcard here is one and three known others of similar designs. There are numerous cards of the individual ships, including one very popular advertising set published by the Prudential Insurance Company.