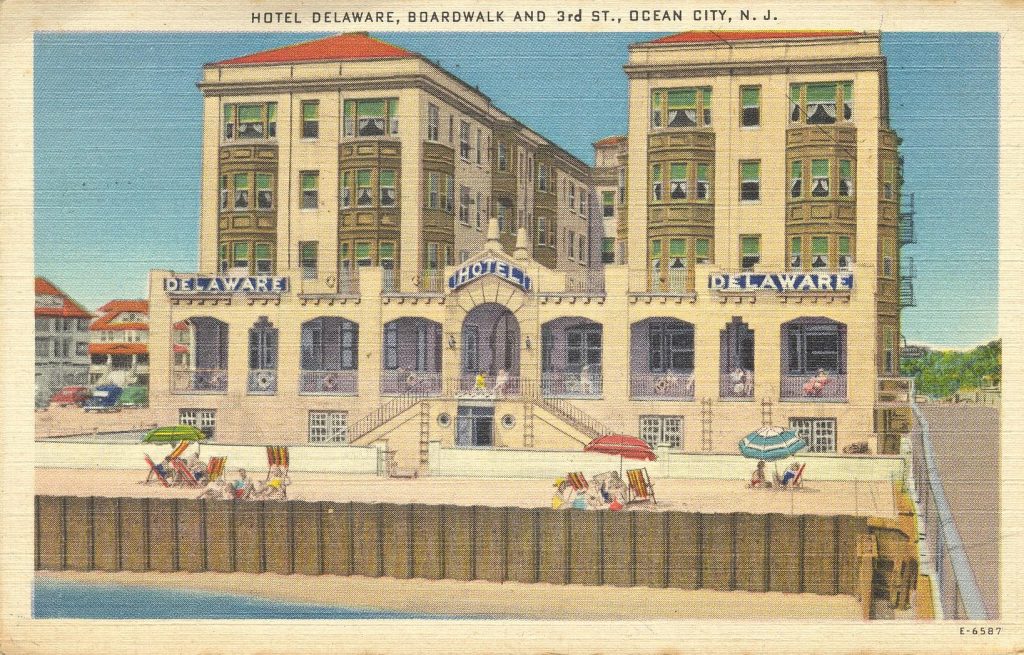 It will soon be summer, a time that conjures memories of the fun filled days of our youth. Ask almost anyone who lives within two hundred miles of the Jersey Shore if they remember what it was like, and you will likely hear stories of weeklong vacations in Asbury Park, Beach Haven, Atlantic City, Ocean City, the Wildwoods or Cape May.

Some families preferred Ocean City as their favorite vacation location, not in spite of, but because of the Ocean City Sunday Blue Laws. Sundays were days of meditation, contemplation and quiet. Other than church, the beach or going out to dinner, there was no entertainment; the stores stayed closed except those that sold newspapers, magazines or pharmaceuticals. Sunday best was the order of the day.

One favorite place for Ocean City vacationers was the Hotel Delaware, built in the 1920s, on the Boardwalk between 3rd and 4th streets. At that time it was expected and proper to wear only Sunday clothes on Sundays – even to the beach. No, not to swim; signs everywhere reminded the public that swimming on Sunday’s was prohibited.

For those fortunate to find summer residence at the Delaware, they could sunbathe on the porches or go down one flight to the boardwalk or another to the beach. There were no other Ocean City apartments as close to the boardwalk or the beach. The 15-foot square porches were the most popular feature of the building. They were open for visitors and enjoyed constant use – nearly 24 hours each day.

In the early years, the Larzelere family owned a restaurant on the ground floor of the hotel. An 8¢ hamburger was the house specialty – they sold by the thousands. Mrs. Larzelere did the cooking. Two other stores and a skee ball parlor took the rest of the ground floor. In the dime store, sand buckets for children were free with the purchase of ten penny candies.

The hotel’s paint scheme was novel in Ocean City; the Delaware was the first building in town painted white and trimmed with gold. The color combination was so popular that by 1950 at least ten buildings were the same colors or similar hues.

Through the late 50s and early 60s, the Delaware was a perpetual favorite with all who knew of it. The end came when the building sustained some minor damage during the nor’easter of 1962. Although sound, the structure was never occupied after the storm because of its proximity to the beach. The beach was so drastically eroded by the storm that the ocean’s waves at high tide would break under the adjacent boardwalk – causing the building to shake.

When the local newspaper reported on the demolition of the Hotel Delaware in 1974, the City Editor proclaimed it a “Sad Day in Ocean City.”