Where Was it Made Part II

To be a complete entrepreneur in the lemonade business you need to own groves of lemon trees, fields of sugarcane, a fleet of trucks, a centrally located distribution center, a lot of squeezing machines, millions of bottles, billions of paper cups and maybe several thousand eight-, nine-, or ten-year-old kids with card tables, checkered tablecloths and several pitchers filled with ice. Oh, and don’t forget the sign that reads, “Lemonade 5¢ a Glass.”

If you manage all this, you are a conglomerate.

In his autobiography, Plow Peddler, [1991] former marketing executive Walter M. Buescher said that Allis-Chalmers “was a conglomerate before the word was coined.” Conglomerate is a word not fully understood by most of us because of our collective lack of economic education and business expertise. Suffice it to say, the word implies, big business and all it entails. 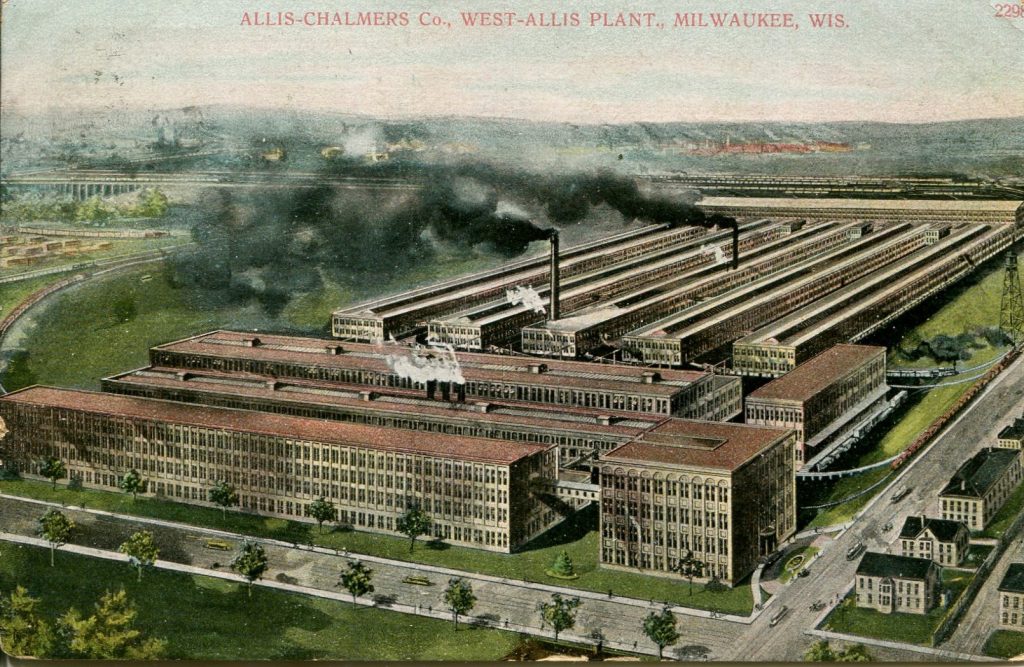 The Allis-Chalmers Company goes back to the pre-Civil War decades, a time when American history books suggest the industrial revolution that began in Britain eighty years before made its way to America. The term Industrial Revolution was first popularized by the English economic historian Arnold Toynbee to describe Britain’s economic development. Now it would describe the very same process as it grew in the United States, Canada and many of the Caribbean nations and protectorates.

Edward P. Allis was born in New York, graduated from college in 1845 and moved to Wisconsin to open a leather tanning business. As a widely successful businessman, in 1860, he bought a bankrupt millwright company that made equipment for milling flour. All was well at the Reliance [Flour] Works until the Panic of 1873. Allis was deep in debt and he was forced to declare bankruptcy. Nevertheless, his character and reputation were together helpful in the reorganization of his business affairs into a new and completely independent Edward P. Allis Company, manufacturers of farm equipment, tools and steam engines. And, voilà! A conglomerate was born.

A Scottish immigrant name Thomas Chalmers came to America around 1842, and within two years had found work at the P. W. Gates foundry in Chicago. The firm was fully into the production of wagons, plows and flour-milling equipment. Chalmers soon took control of Gates and Gates was soon the first in America to build a steam driven lumbermill when Chicago was the product center for milled lumber. By 1880 the Gates Company had expanded to become Fraser & Chalmers with product lines that included large scale steam equipment and within another decade they added mining equipment – including steam hammers and rock crushers.

So, as Paul Harvey used to say, the rest of the story is that the century changed and in 1901 the principals of the Edward P. Allis, Fraser & Chalmers, and the Gates affiliates had decided to merge their companies. In May 1901 the Allis-Chalmers Company was formed and within the next decade they acquired Dickson’s Locomotive business of Pennsylvania, and then completely revamped the manufacturing center.

This story has only scratched the rust off the history of the Allis-Chalmers Company. The company is now part of other multi-national business organizations. The agricultural division was sold some years ago to AGCO. In 2004 AGCO entered the Fortune 500 list of America’s largest companies. The Internet is a good source of detail if your interest extends that deep.

As was said in Part I, factory postcards are not a big part of our hobby, but they illustrate a big part of American history. The postcard here shows the Allis-Chalmers factory site where in 1901 the corporate reorganization began. It is postmarked March 26, 1907 and was mailed to Miss Minnie Oston in Sanborn, New York. The sender wrote, “This is where I spend six days each week and sometimes several evenings. Frank.” With just a little research it was discovered that Frank A. Oston (Minnie’s brother) was a bookkeeper at Allis-Chalmers. The site is at West-Allis, in Milwaukee, Wisconsin. It was a bit more than a lemonade stand, but that is where all the products of the A-C company, a true conglomerate were made.

As a dairy manufacturing student a Cal Poly, San Luis Obispo, CA, I didn’t need to drive tractors a lot but did drive an Allis Chalmers tractor to tow a float during one of our reunion days around 1965. Enjoyed the article very much!