The Amazing Output of

As World War I loomed, a varied group of talented Indiana illustrators, comic artists, and cartoonists were beginning their careers. While none of these Hoosiers are household names today, Cobb Shinn of Indianapolis became the most prolific and collectible postcard artist of the group.

Conrad (“Cobb”) X. Shinn was born in 1887 in Fillmore, Indiana. He attended the John Herron Art Institute in Indianapolis from 1907 to 1909. Even as a student he published postcard cartoons on various subjects. While I have never found a postcard of his with an undivided back, several of his cards with snippets of poetry by the “Hoosier Poet” James Whitcomb Riley bear a 1907 copyright date. Shinn was 20. 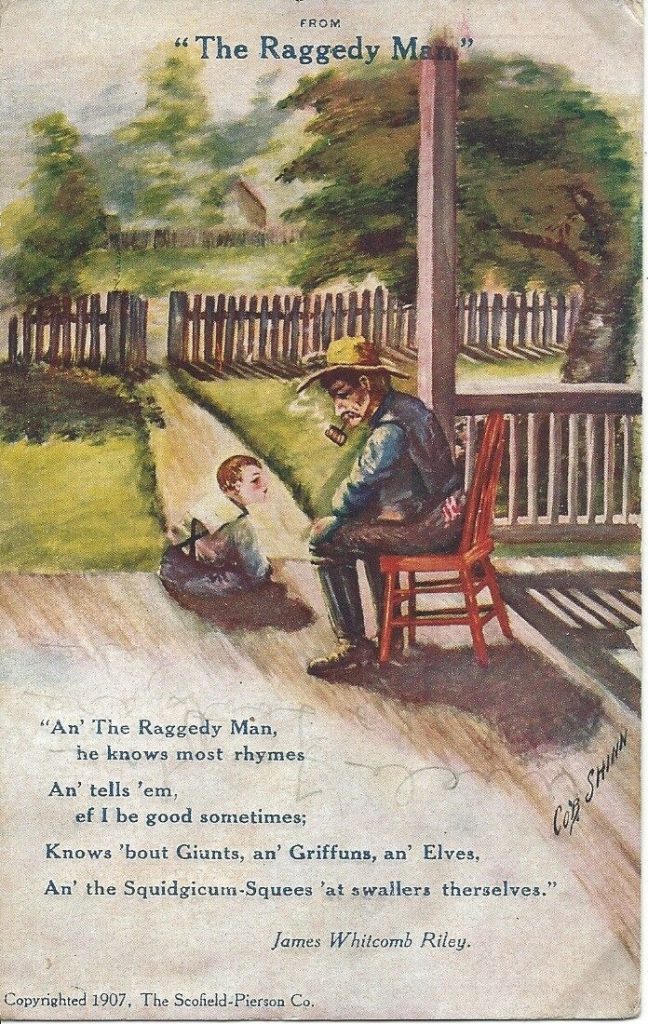 An article about Shinn in the Indiana Historical Society’s quarterly Traces asserts, alas without citation, that he may have produced cards in as many as 165 different series. Indianapolis, where Shinn lived and worked all his days, was a metropolis of over 230,000 people in 1910 with a variety of postcard publishers. I’ve examined many Shinn cards and have found that relatively few show direct evidence of being part of a series.

Shinn’s humorous and ironic turn of mind was always in the forefront of his work. While his publishers probably didn’t produce limited sets or series of cards, he exhibited a wide range of humorous themes. His “Foolish Questions” postcards show one such theme using a title “borrowed” from a Rube Goldberg Sunday comic strip series published by the Chicago Tribune. 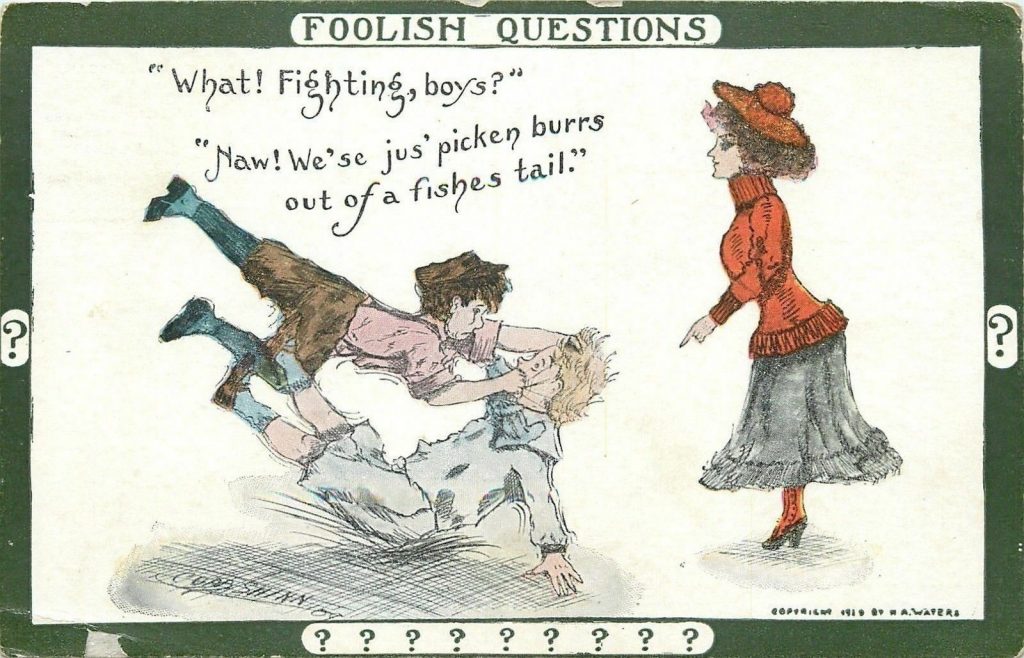 By 1912 Shinn was on a roll. The local newspaper headlined an article exclaiming “Twenty-Five Million Postcards Yearly Fall From Presses In Designs Created By Cobb Shinn, an Indianapolis Artist.” He was 25.

It was about that time that Shinn came to the attention of the Ford Motor Company. It seems that Henry Ford recognized that the jibes at his Model T (first built in 1908) could be turned to his advantage. Shinn began providing humorous cards poking fun at the Model T. Henry Ford is reputed to have said that “every time someone laughs at a joke about the Model T, I sell another car.” 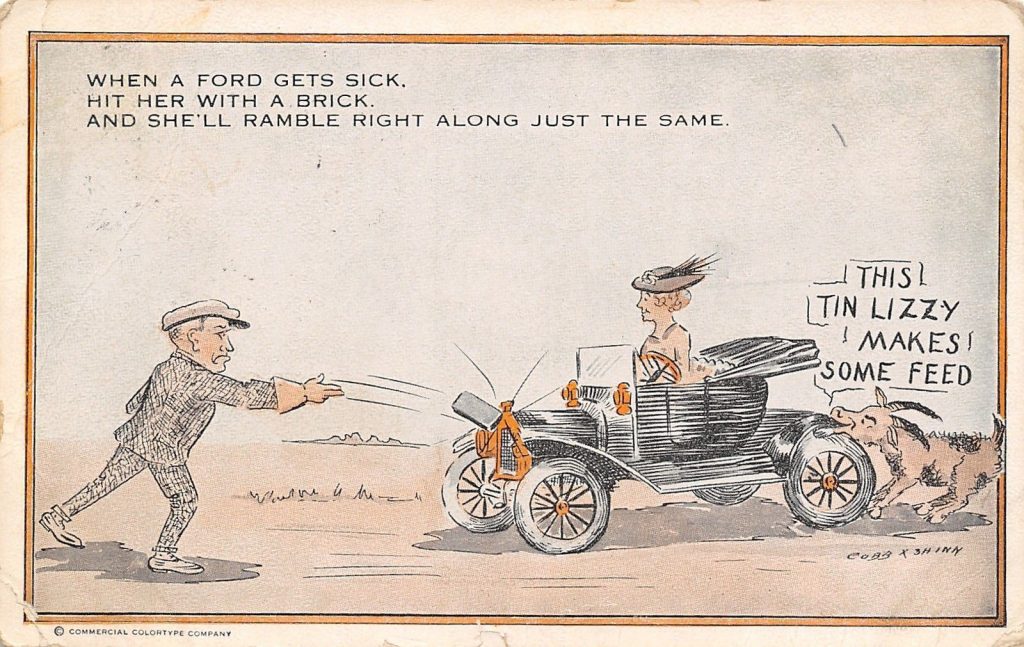 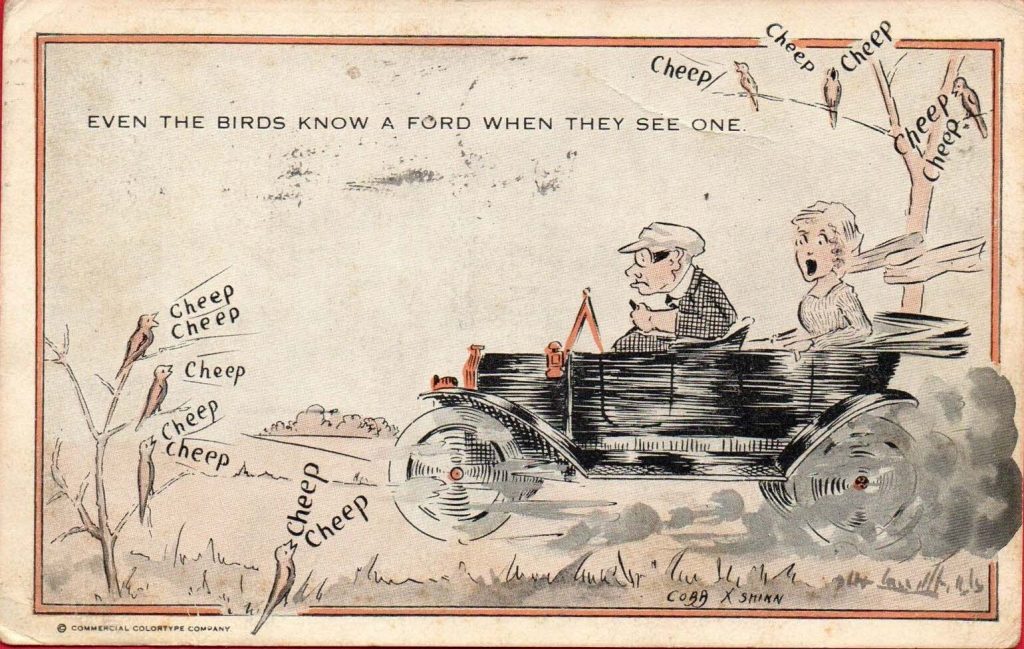 Many of Shinn’s Ford cards were published by Commercial Colortype Company and were often copyrighted by them, but not always. Some of the Ford cards make use of pidgin English with German or Dutch accents. 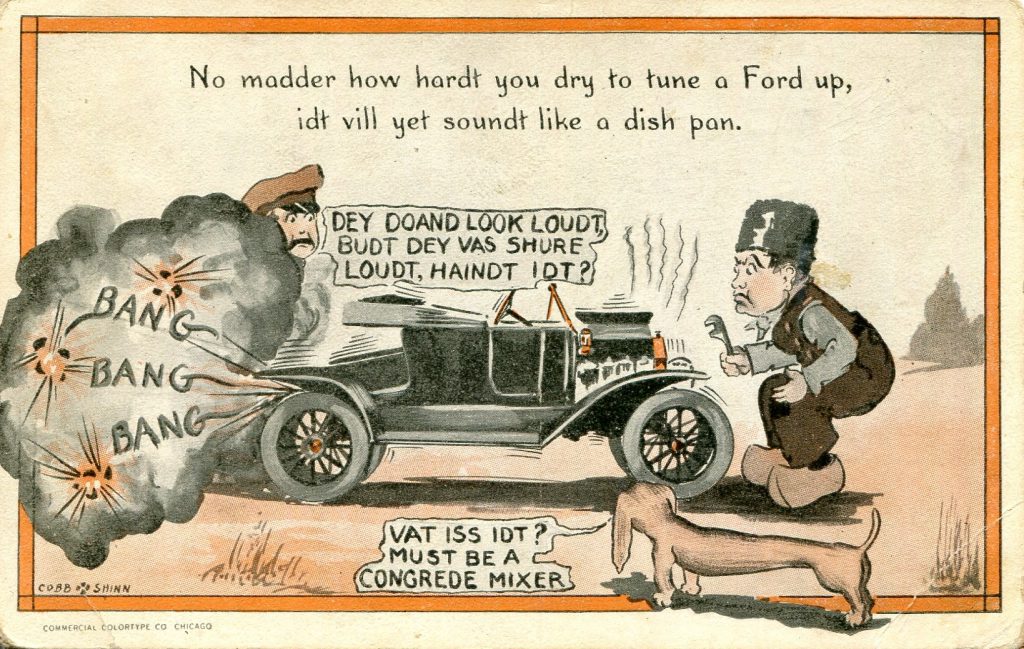 It isn’t certain whether Shinn’s postcards involving Charlie Chaplin were created before or after the American entry into World War I. As Chaplin had no control over the use of his character, Shinn was legally able to create cards featuring takes on the “Little Tramp” image. 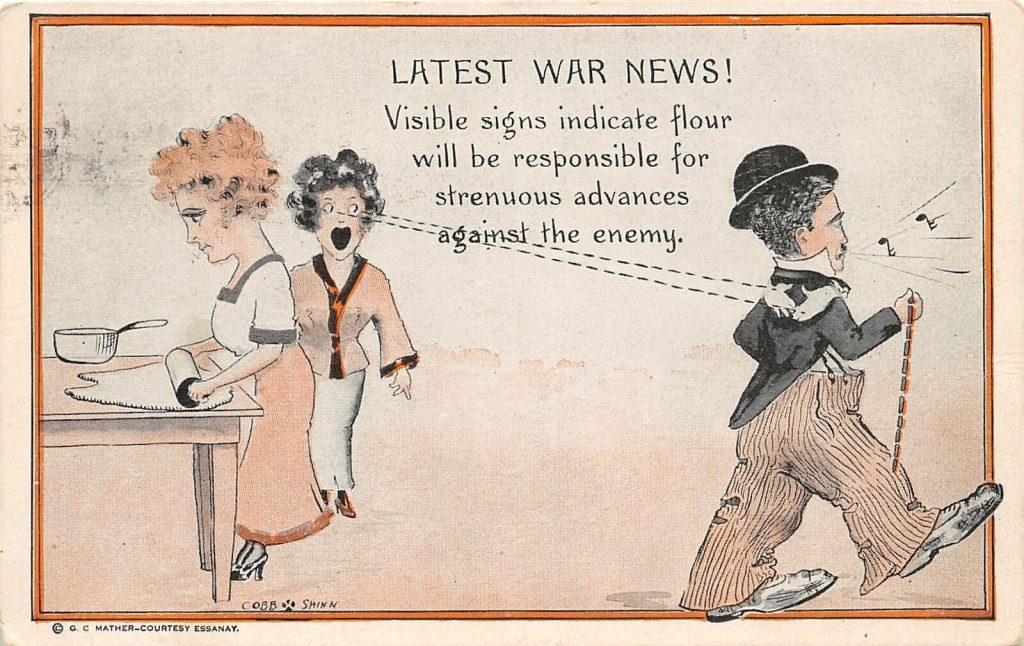 What is certain is that in November 1917, Shinn at age 30, volunteered for the Army. He ultimately was assigned to a unit that made camouflage cloth to confuse enemy air strikes. He sent home humorous cartoons of his army life, which the local paper says were also printed by many other newspapers.

Shinn returned safely to Indianapolis in 1919 to a changed art landscape. The “Golden Age” of postcard collecting had faded and with it had gone the demand for his postcard designs. Shinn adjusted by changing to book illustration and writing books of his own.

His large-scale, full-color illustrations for the “Just Right” version of Helen Bannerman’s Little Black Sambo, published by Albert Whitman & Co. of Chicago in 1925 (first published in England in 1899) were successful. Editions of the Whitman book with Shinn’s illustration continued until 1945.

Shinn was always willing to share his knowledge of drawing. He had enlarged his relationship with Whitman who in 1924 published Shinn’s Fun Artist’s Picture Show Book and The New Way Busy Fingers Drawing Primer followed it with Drawing the Easy Way in 1927. Shinn continued to work with Whitman, illustrating numerous other books for them for many years.

Shinn’s legacy is not just his myriad of postcards nor his illustration art nor his how-to books. Publishers always wanted to illustrate their books and they often turned to artists like Cobb Shinn. Commercial publications wanted a different kind of illustration, though, one that was cheaper and could be used over and over again. 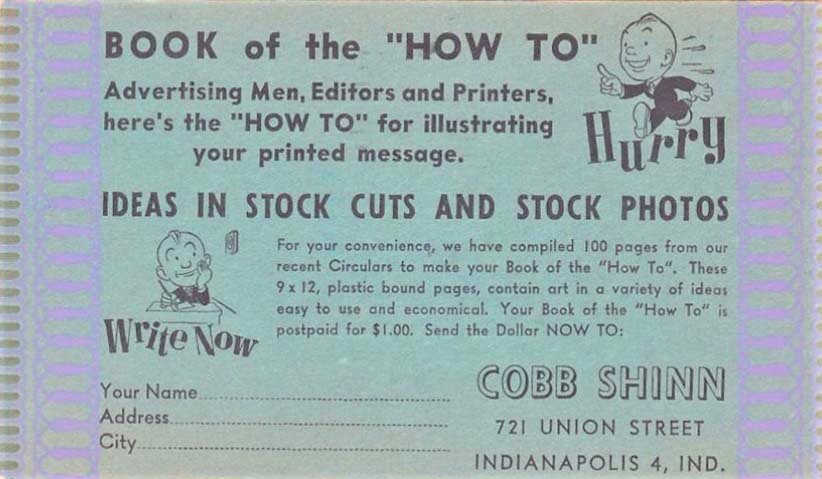 Thus “stock cuts” or, as they are known today, “clip art,” began in the mid-nineteenth century. The demand was high for quality work and Cobb Shinn moved to fill it. He began issuing monthly catalogues of his stock cuts in the late 1920s and continued to do so until at least 1948 (the postmark on this card).

Shinn died on January 28, 1951, and is buried in Bluff Creek Cemetery in Greenwood, Indiana.

Bill Burton began collecting Ossining, New York postcards when he lived in that Hudson Valley town. His collection expanded, of course, to include his college, the neighboring towns, and places where he and his wife traveled. In retirement, he's refocused on Delaware and the DelMarVa peninsula towns, but he’s just as likely to be found parked in front of the 25¢ boxes at shows.
PrevPreviousThree Tragic Lives
NextWhere Was It Made? – Part VI – SheetsNext
3 Comments
Oldest
Newest Most Voted
Inline Feedbacks
View all comments
Bob Kozak

Another of the “Hoosier artists” was John T. McCutcheon, for whom a high school in my county of residence (Tippecanoe) is named. Purdue’s Ross-Ade Stadium is partly named for humorist George Ade, who contributed land and money to the construction of the facility.

You’re reminding us that J. T. McCutcheon was also a “Hoosier Artist.” He certainly made a mark in the world of postcards and their history. His “Boy in [name a season]” cards that, I think he started around 1903 deserve some attention at this site. I’ll see to it at a future date. Thank you. Editor, Ray.

I dug this out of a box. We are from Indiana and I can not match this Cobb postcard with any of his others. Any idea what “Taint-Hic” means? Surely it isn’t a forcast of the Titanic disaster. Any help appreciated.
https://www.instagram.com/p/CYV0qD0u1xR/?fbclid=IwAR2OgEkBivn4ii4gLctwzvTchwNi5XzCyssgmBbdXouahxEN8J1eSXgN4Nk