Where Was It Made?
– Part VI –
Sheets

Did you sleep on “Pepper Mill” sheets when you were a kid? No? Neither did I, but that’s what we called them. Pepperell was a brand name of the sheets my mother bought. My family loved them for one reason – unlike other brands, Pepperell sheets did not make those little pills of lint that you would find stuck to your face or in your hair or ears every morning.

When my new wife and I first began shopping for household items over fifty years ago, she was excited about a bedroom suite, curtains, lamps and whatever. The only thing I cared about were the sheets. The sheets had to be “Pepper Mill” sheets.

Did you know that two manufacturing companies have the name Pepperell? There is one in Massachusetts and one in Alabama. The New England concern is the Pepperell Braiding Company. It was founded in 1917 to manufacture shoelaces for combat boots. They also made wicks for government issued cigarette lighters and after the war candle wicks became their primary production item. Today, Pepperell Braiding is the leader in top quality macramé cord.

The much older company is Westpoint–Pepperell, Inc. Located in Alabama, it is still a leader in manufacturing cotton-based products. Founded in the post-Civil War reconstruction era, Pepperell has endured several stormy eras of financial stability, but has survived into the 21st century as the top-selling U.S. producer of domestic bed linens and the number two producer of bath towels. Currently, the company’s product line includes sheets, towels, and apparel, including such famous brand names as Martex, Ralph Lauren, and Lady Pepperell. 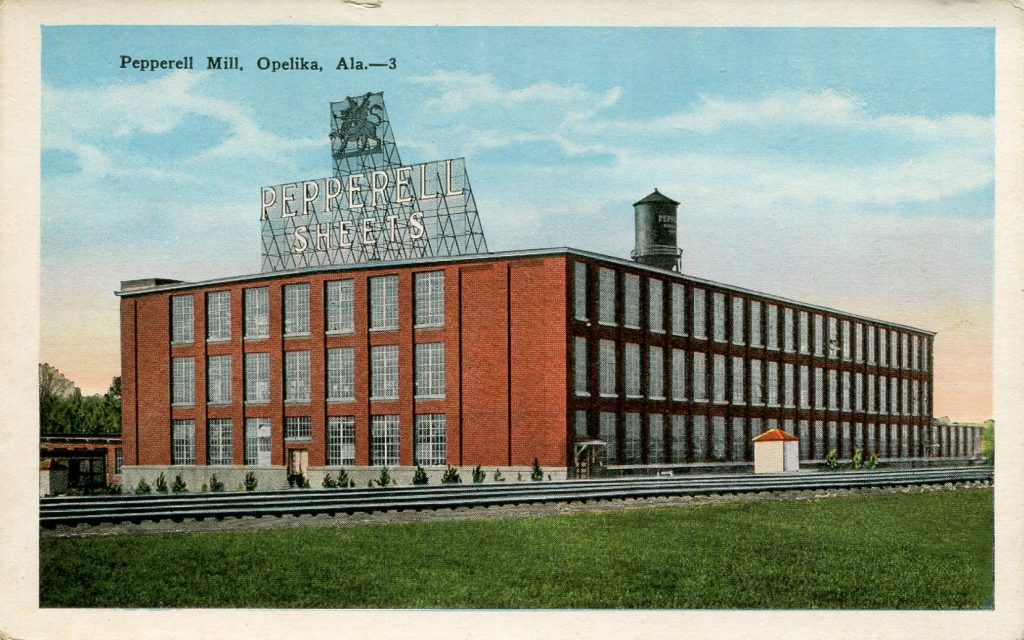 During the 1850s and ‘60s southern-grown cotton comprised more than 60% of all U.S. exports. It was easier to sell it than use it, very little was being manufactured locally. Great Britain took the lion’s share of U.S. exports because the price was about 45% less than the cotton grown in Egypt’s Nile valley. New England cotton mills took whatever the British left.

After the Civil War, the paths of devastation were so wide that the South looked to industry as the means to revive its economic stability. All the elements worked: plenty of raw material, a willing work force, and a strong market equaled a promising future. The Chattahoochee River valley near West Point, Alabama was where the first attempt was made to create industrial centers. The initial few years had highs and lows but then the financial panic of 1873 was devastating for all concerned until Lafayette Lanier and Ward Crockett, both veterans of the confederate army, acquired stock in them and converted production to the fabric used in canvas wagon tops and tents (duck cloth), which was then in great demand.

In 1880, Lanier and Crockett modernized the machinery, restructured the finances, and renamed the operation as the West Point Manufacturing Company. There were eight stockholders and 75 employees.

In 1906, Lafayette Lanier’s son George stepped in to help his ailing father steer the company. Under George Lanier, who helped to launch the company’s second expansion program, another duck-cloth mill was built, and the company made the transition from waterpower to electricity. Lafayette Lanier died in 1910 and in time, George Lanier became president, serving the company in this capacity from 1925 until 1948.

George Lanier had brought with him experience in the manufacturing of towels. His accomplishments were numerous and included the establishment of a towel factory in Fairfax, Alabama in 1916. During World War I, the company met demands for army fabrics, but after the war it resumed making towels.

In 1925, Pepperell began construction on its Opelika Mill in Alabama. A year later one of Pepperell’s best-known brand names was introduced, a line of sheets called Lady Pepperell. Another mill was built in Opelika and a sales force was organized.

Today, Opelika is a community of about 30,000 located in the east-central portion of Alabama, 35 miles west of Columbus, Georgia.

The time-tested question is, “Where did they make it?” The answer is Pepperell bedsheets were made in Opelika, Alabama.

Since 2010, it was stated by a woman with a perfect English accent and from Laura Ashley that the growth and use of cotton will never again be as it has been .before in the southeastern U.S, Yes, much changed but, Scarlet O”hara did say afloat after the Civil War. Then the textile inndustry grew with enterprising engineers and the need for products by a military. It advanced onward with hydro power and milk production along the rivers. The old sites were most recently turned into society and artistry gathering places whether using local welfare and social security funding or… Read more »