This is the
Extreme End of America

Editor’s Note: We present this article today with a great deal of pride. It is the first article to appear in the second year of our publication. It is also a pleasure that we were able to have Mr. Shav LaVinge from the San Jose Postcard Club partner with us in its publication. Thank you, Shav. And, I’m sure I speak for Shav and all of us at Postcard History when I say Thank you to our readers who have been so loyal in the past year. 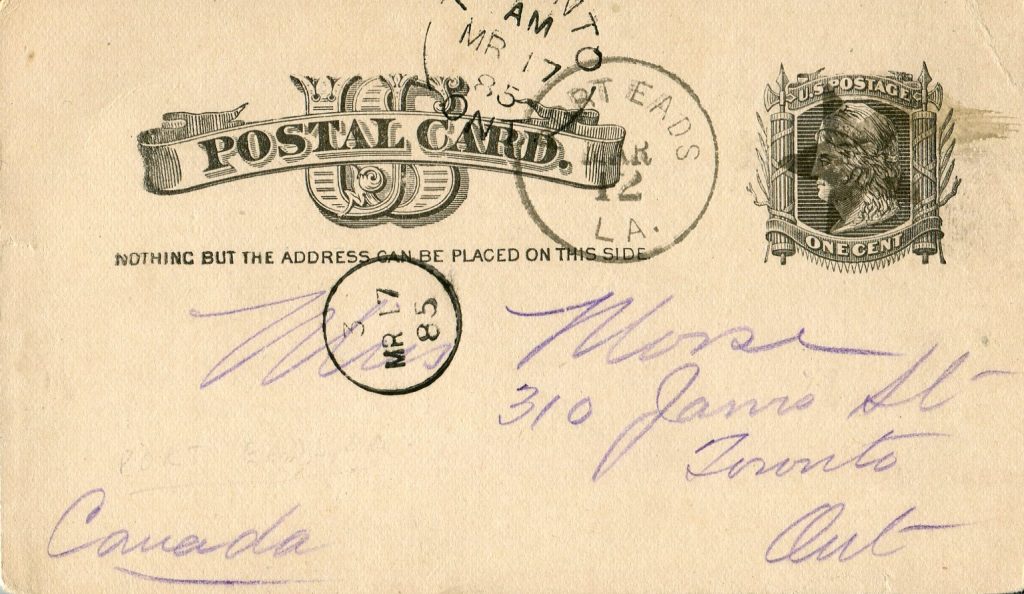 Some weeks ago, to be exact it was February 20th, one of Postcard History’s devoted readers sent the following email.

I have written an article for our own San Jose Postcard Club Newsletter that I would like to share with the readers of Postcard History. It is rather short and does not have a “picture” postcard, but I think it is very interesting and wanted to bring it to your attention as a possible addition to your publication.

Mr. LaVigne’s email prompted a string of correspondence and to facilitate the inclusion of his article in Postcard History, he mailed the card to me for inspection.

The minute I saw the card, I knew there was a fabulous story behind it and that story begged to be discovered. I ask Shav if he would be patient with me while a couple of my colleagues and I investigated what could be a story that I call a piece of “Postcard Genealogy.”

As some say, “You can’t build a case on circumstantial evidence.” When however, there is no other evidence, and a curious genealogist is working the case, the evidence needs to be measured in degrees of coincidence. There are several degrees of coincidence here and they are too much to ignore. But first, Mr. LaVigne’s contribution to Postcard History.

Interesting Postcard from the “End of America”

Here is an interesting postcard that has been in my collection for many years.  After taking the time to read it; I was amazed to see the interesting history it talked about.

This card was sent from Port Eads, Louisiana on March 12, 1885, to Toronto, Ontario, Canada. The message is: 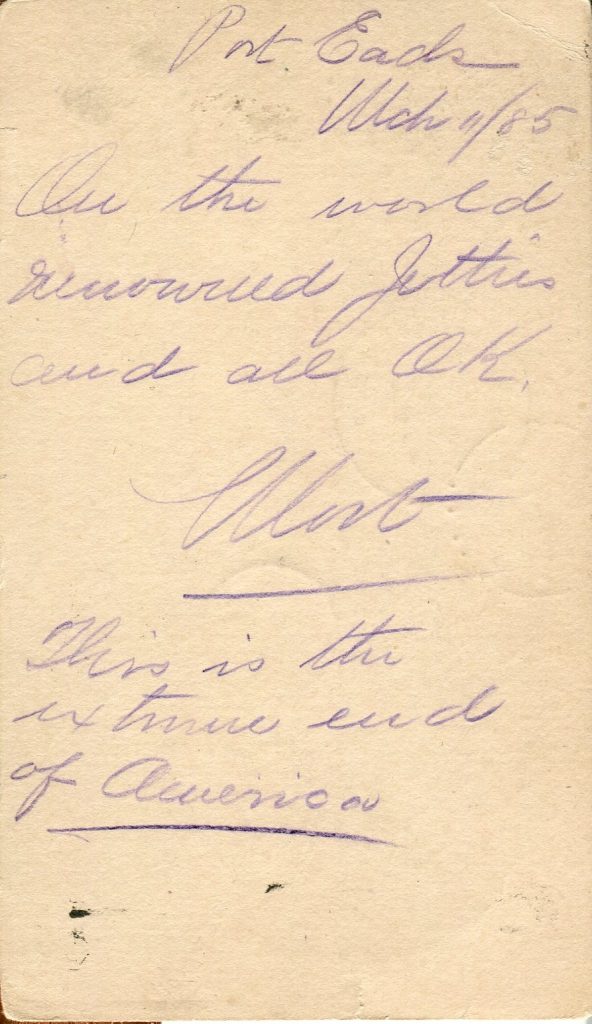 This is an interesting postcard in several respects.  The fact that it has survived 135 years and is still in fairly good shape is one, the fancy star cancel on the card is second, and the location where it was mailed is the third.

Port Eads is, indeed, as far south as one can be in America.  It is at the far southern tip of the Mississippi River Delta in Louisiana. Close your eyes and imagine the adventure and sites of being in such a place all those years ago!

Just a few years before this card was mailed, James Buchanan Eads (1820-1887) in 1876, began solving the problems of the Mississippi River delta silting up in its outlet to the Gulf of Mexico.  This problem caused ships, entering the port of New Orleans to become stranded and making parts of the delta completely un-navigable at times.

Eads solved the problem with a wooden jetty system that narrowed the main outlet of the river. This caused the flow of water to speed up and cut its channel deeper allowing year-round navigation and safe access to the river for large ships.  In the years following the completion of the jetties, trade at the port of New Orleans doubled.  James Eads was honored by having the Port of South Pass named after him.

Hurricane Katrina completely devastated Port Eads in August of 2005.  In 2009 FEMA authorized $12 million to rebuild the Port Eads Marina.  Today it is used, primarily, by offshore fishermen who begin and end their voyages at its docking and refueling facilities, bunk rooms with in-room baths for rent, a weigh station, and a small restaurant.

Please let me know what you think of this card and the story it tells.

As I said, this card presented the curious genealogist with a challenge. Now, after nearly three months of research, here is the story to who, when, where and why.

First the who. The card is addressed to Mrs. Morse at 310 Jarvis Street in Toronto, Ontario. It is not a far cry to deduct that if a “Mrs.” is sent a postcard, signed by a male who has not included his surname that the gentleman mailing the card is Mrs. Morse’s son.

From that point of view, the Canadian Census was my starting point. About official Canadian Dominion documents the experience researcher will tell you two things; one, the Canadians Census schedules were patterned after the United States Federal Census, but with a few additions and a couple deletions. The first official Canadian census was taken in 1871. The second thing you should know is that the enumerators who recorded that first census had penmanship even worse than their American counterparts.

So the search began, “Given Name Unknown” Morse, Toronto, date of birth unknown but estimated to be 1835. Since the Canadians decided to count their citizens by Wards in Cities, that were named at the time (not numbered) we finally found Mrs. Morse after scanning St. Andrew’s Ward, St. Barnabas’ Ward, St. Bartholemew’s Ward, St. Clement’s Ward and  when St. David’s Ward was searched, there she was. (I was so glad she didn’t live in St. Zacarius’s Ward.)

Sadly, the first thing discovered was that Mort’s mother, then age 34, was a widow. It is unknown if the male parent died or left the family, but the single-maternal parent was listed with five children under age 12: Fred W., 11; Frank M., 10; Nellie Maud, 8; Harry Victor, 4; and John Taylor, 2. It wasn’t immediately obvious, but when a deeper dive proved the second son’s full name was Frank Morton Morse, it was safe to assume we had found “Mort” who signed the postcard to his mother Marielizbeth.

Due to the lack of corporation records, it is unknown how or how much of a fortune Mort acquired in the five-year span from graduation to that day in March 1885 when he mailed the postcard to his mother. The one thing we know is that he had powerful connections in Canada, with ties to the import and export of raw and manufactured commodities coming through the seaports in the southern states. His visit to Port Eads could likely have been business related.

Mort Morse was born in July 1861. He was educated at Upper Ontario College in Toronto and shortly after graduation he left Ontario and moved to Manitoba and settled in Winnipeg.

He married Ruth Ella Cummings, the daughter of a well-known farm owner on August 8, 1888. They had four sons: Stanley, Garth, Eric, and Gerald. Mort’s and Ruth Ellen’s four sons became American citizens and lived in Minnesota, Illinois, and California.

Morse’s business relationships in the 1880s, ‘90s, and ‘00s included the Winnipeg Electric Company and a full-partnership at the Miller-Morse Company, the leading wholesale hardware merchandising concern of the era.

Frank Morton Morse, a pioneer businessman in the Canadian west died on October 16, 1931. He was 71.

The Staff of Postcard History offers this article for your enjoyment. It is a combined effort of many: our publisher, editor, webmaster and collectors/contributors far and wide. Please use the COMMENTS feature below to let us know how we're doing.
PrevPreviousWhere Was It Made – Part VIII – Paper Bags
NextWhere Was It Made -Part IX – Lucky Strike CigarettesNext
2 Comments
Oldest
Newest Most Voted
Inline Feedbacks
View all comments
Ellen Richardson

This is a great article! I also love investigating and tracking down family histories. There is so much to be learned.

Thanks for the interesting article. It is a great example of the kind of research we can do for special cards. I love the way you and Shav La Vigne placed the card in the context of history and the way you traced the family story associated with the sender of the card.