A Day at the Sitting Bull Stampede 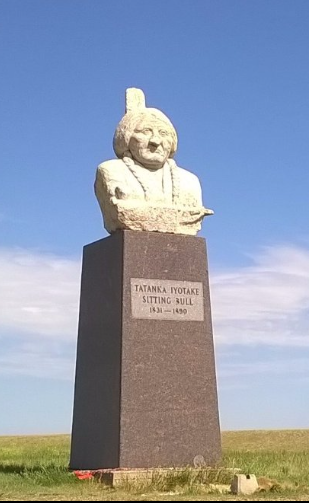 For those who grew up in an urban setting, an event such as a rodeo might seem almost foreign, yet it is one of the most American and Canadian sports. Rodeo origins go back to the days when cowboys, working on ranches during the week, would look for something to do and a place to compete and show off their skills. Obviously, this would happen on a Sunday afternoon when they had that one day of free time. It may have all started as simply good fun, but it then grew in popularity. Such is the case with the Sitting Bull Stampede in Mobridge, South Dakota.

Mobridge is located along the Missouri river not far from the neighboring state of North Dakota and only about 300 miles from the Canadian border. Mobridge was founded because the railroads wanted a bridge across the Missouri river to link the east coast to the west coast. That bridge also furthered additional settlements westward and allowed for more commerce across the Great Plains.

Each year, for several days around July 4th, the Sitting Bull Stampede is held in Mobridge. The name of this event may seem obvious but as a reminder, Sitting Bull was a well-known Native American chief of the Sioux Nation. This particular part of the United States was sacred to the Sioux and Sitting Bull was the face of those who roamed these parts. Ultimately the great chief was buried not far from the rodeo grounds and the rodeo now named after him.

The history of the Sitting Bull Stampede begins on July 4th, 1945, when A. W. Spiry, a local physician, decided to make an official event out of what had previously been held unofficially by groups of ranchers. They would allow their cowhands to compete in various events all for fun. Although it was Spiry who organized this event for more people to enjoy, this soon grew to include others interested in the sport.

In the beginning, it took seventy-one businessmen, professionals and business firms alike, to organize the Mobridge Rodeo Association. Their aggregate investment of $25,000 managed to underwrite the event. Since there were limited funds for seating car tops and even the rodeo grounds were used as bleachers. Nothing too fancy for those who enjoyed the event. The association established the first purse at $2,500. As time went on and the rodeo showed a profit, two grandstands were built along with other needed equipment, including chutes and stock pens. All added to the 32-acre rodeo grounds.

The first big show was held on July 4,1946. Brahma bulls from Mexico and Texas, trick ropers and riders, clowns from Oklahoma, bullfighters, and cowboys from everywhere made up the original cast.

Dr. Spiry, now president of the association, later incorporated a daily parade through main street of Mobridge, showing off floats, some horses with riders and even a high school band. 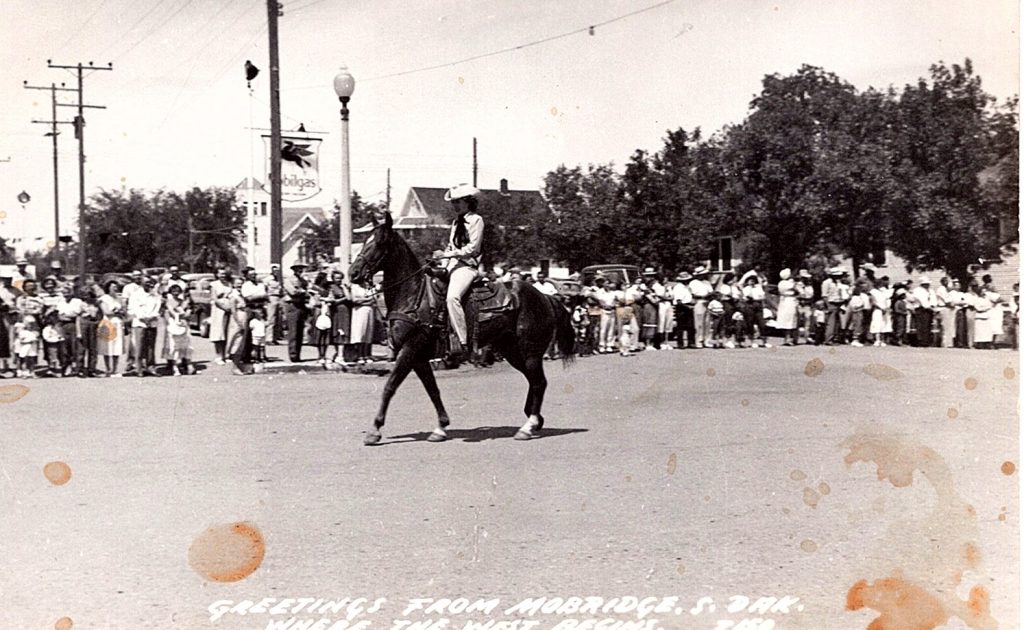 To declare how the event really was a draw this headline was featured in the local newspaper: Boy, 17, Rides Horse 160 Miles to See Rodeo. It took that boy six days and six dollars to get to his first rodeo! I’m sure this young lad had many stories to tell when he returned home and many years later, he still talked to his grandchildren about those experiences. 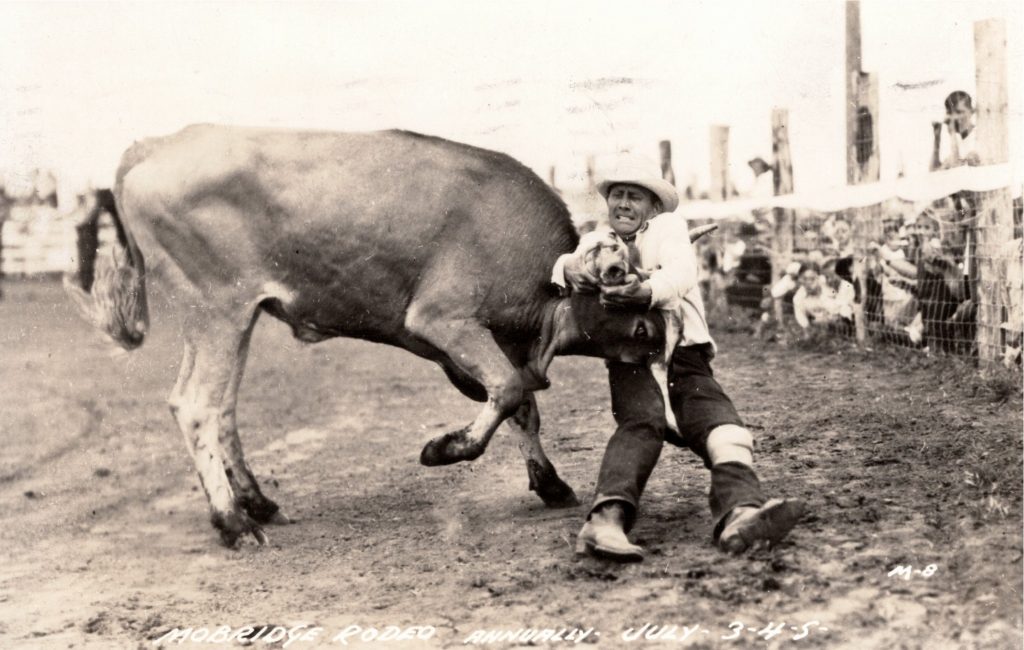 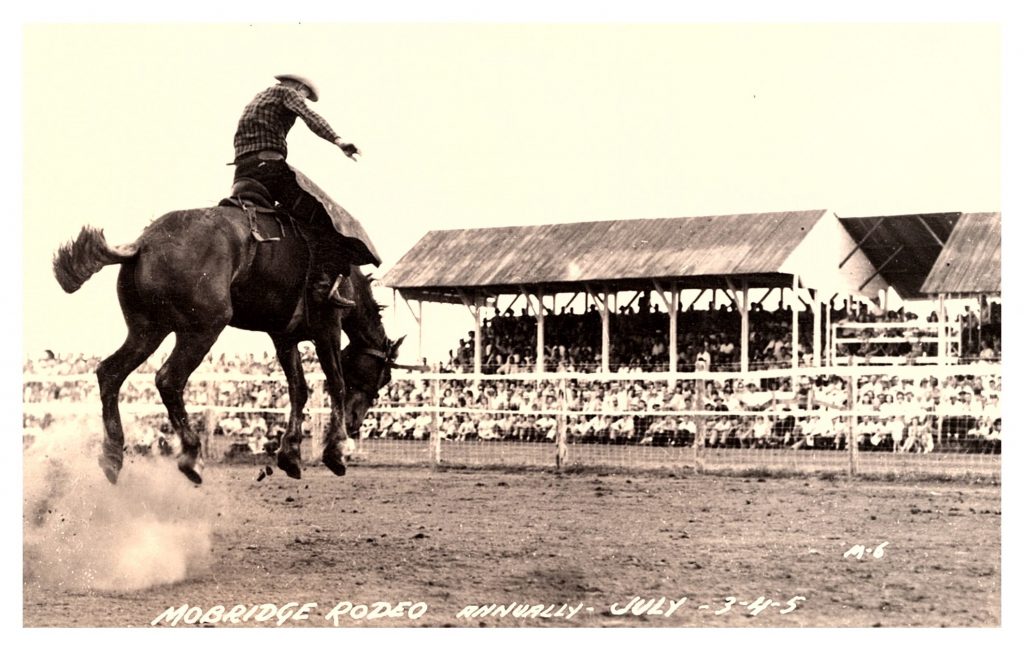 The rodeo as a regular event was a great success for Mobridge and by the end of the decade, nearly 15,000 people attended each year. That was up from the 8,000 who attended the first rodeo. The Sitting Bull Stampede was soon recognized nationally by the Professional Rodeo Cowboys Association (PRCA) and featured top-name professional cowboys and cowgirls, top animals, and top rodeo entertainment. Each year on the night of July 4th, after the rodeo, a huge fireworks display would cap off that year’s event.

For me, this was a big deal since I grew up on a farm about 80 miles away and the opportunity to see such an event was great fun. I recall seeing a well-known cowboy, Casey Tibbs, who became a world champion. I loved the clowns who would do whatever it took to keep the riders from getting injured by an angry bull or a bronco that had too much spirit. Looking back, I now realize they were great athletes. Today, there are others who continue in the footsteps of those who pioneered this rodeo and they, like the sport, have evolved and matured.

I still find those events of interest, but it has been many years since I’ve attended a rodeo. Looking at these postcards brings back memories of when I sat on a bleacher seat and took in the rodeo – perhaps a lesser known American pastime to many but certainly an important event throughout the Great Plains.

Duane Stabler is retired from a career in engineering. Like many postcard collectors, Duane is also interested in genealogy and has successfully published in that field of endeavor. In addition he edited the Twin City Postcard Club newsletter for eleven years. Duane and his wife live near Dallas, Texas.
PrevPreviousThe Legend of Stingy Jack By Debbie Meister
NextThe Lost Summer with Sandra CobbNext
2 Comments
Oldest
Newest Most Voted
Inline Feedbacks
View all comments
Peter Senft

Great article about the Sitting Bull Rodeo. It was one that I didn’t get to ride in…

Thanks Peter, To the best of my knowledge the rodeo is still going on each July. As a kid, it was a big deal to me to get to attend several times. From your comment I presume you were/are a cowboy and made the circuit.