and the Calico Cat

Wrong! Yes, the book is so titled, but the poem’s correct title is, The Duel; the story of a cat and dog fight between two stuffed animals in the middle of the night.

Publishing, like everything else in life, is cyclical. Publishing children’s books hit one of its high-watermarks in 1912. The market boomed. Publishers in London, New York, Chicago, and San Francisco were scrambling to find material. Thankfully, there was plenty. But another way to make money in that early 20th century publishing boom was to reprint books with established reputations.

The postcard you see here is a publisher’s advertisement. The author of the material had been dead for more than fifteen years. Johanna Westerman, a noted illustrator of the time was hired to illustrate a poem that was first published nearly a half century before and because of the book’s popularity and low price, literally thousand sold. Today it is a collector’s item, but in 1912 the publisher promised that for $1.25 you could have this book delivered to your front door! 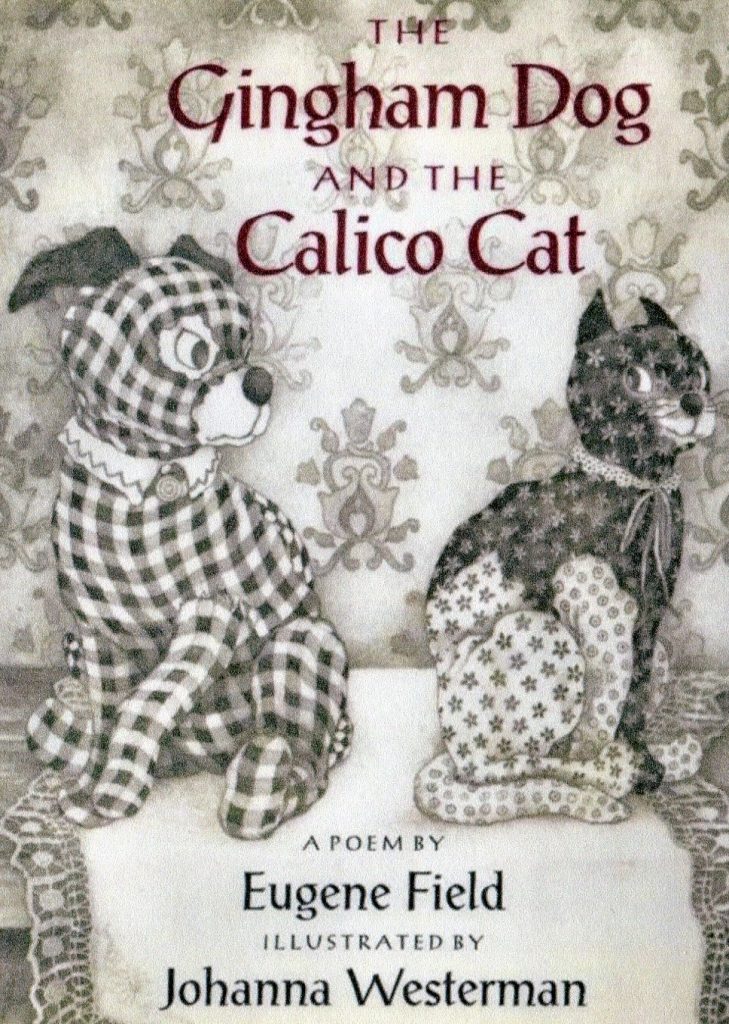 The Duel by Eugene Field

The gingham dog and the calico cat
Side by side on the table sat;
‘Twas half-past twelve, and (what do you think!)
Nor one nor t’other had slept a wink!
The old Dutch clock and the Chinese plate
Appeared to know as sure as fate
There was going to be a terrible spat.
(I wasn’t there; I simply state
What was told to me by the Chinese plate!)

The gingham dog went “Bow-wow-wow!”
And the calico cat replied “Mee-ow!”
The air was littered, an hour or so,
With bits of gingham and calico,
While the old Dutch clock in the chimney-place
Up with its hands before its face,
For it always dreaded a family row!
(Now mind: I’m only telling you
What the old Dutch clock declares is true!)

The Chinese plate looked very blue,
And wailed, “Oh, dear! What shall we do!”
But the gingham dog and the calico cat
Wallowed this way and tumbled that,
Employing every tooth and claw
In the awfullest way you ever saw—
And, oh! how the gingham and calico flew!
(Don’t fancy I exaggerate—
I got my news from the Chinese plate!)

Next morning, where the two had sat
They found no trace of dog or cat;
And some folks think unto this day
That burglars stole that pair away!
But the truth about the cat and pup
Is this: they ate each other up!
Now what do you really think of that!
(The old Dutch clock it told me so,
And that is how I came to know.)

Eugene Field (1850 – 1895) has often been called the Poet of the American Childhood. His literary fame is based on his poetry and funny stories written mostly for children.

He was born in St. Louis, Missouri. After his mother died when he was six, Eugene was taken-in for rearing by his cousin, Mary French of Amherst, Massachusetts. Eugene’s father was the famous Roswell Field, who was known as Dred Scott’s, legal representative in the Supreme Court’s landmark case, Dred Scott v. Sandford. That was the case that is often called, “the case that started the Civil War.”

Mr. Field died when Eugene was 19. Eugene had been attending Williams College in Massachusetts but left there for what he thought was a better fit at Knox College in Illinois. Knox was not the answer for Eugene and after a year he moved on to Columbia, Missouri, where he enrolled at the state university. Because he was not a serious student he decided to move to other haunts.

After his mis-spent college years, a trip to Europe from which he returned without a dime, Eugene tried journalism at the St. Joseph (Missouri) Gazette, where at last he found success at age 25. Happily, that success came quickly. Within months he became the city editor and as the promotions came so did new job offers.

He married Julia Comstock in 1875 and the following year moved to St. Louis where he started a long period of whirlwind employments in no less than five cities across mid-west America, that ended in 1883 at the Chicago Daily News.

In Chicago he wrote a column called “The Sharps and Flats” which ran in the morning edition. It was an opportunity for Field that he had never enjoyed before – he could freely express his opinions on any topic, Chicago baseball being a favorite.

Field’s first poems appeared in 1879, when his poem “Christmas Treasures” appeared in A Little Book of Western Verse. Sometime later his short stories generated a national enthusiasm for Field’s writing and as his poetry collections followed his notoriety spread across the country. Among his most popular poems are “Wynken, Blyken, and Nod” and “The Duel.”

Field died in Chicago of a heart attack at the age of 45. There are at least thirty schools in America’s mid-west which are named after him.

This book was published in 1994, not circa 1912. I know this because I commissioned and designed it.

One of Field’s best poems is “Jest ‘Fore Christmas”. He was apparently the Shel Silverstein of his day.

I cherish Every word and comment about this poem!

One of my favorite poems to read to my grandchildren! Love Eugene Field. I loved the little story behind this picture. It’s the most graphic picture offered in my search, and apparently may have been one of the original illustrations.