This scarce set of cards was a product of the American Colortype Company of Chicago and New York. Each card is inscribed in the top margin with “Reveille Post Cards. “Bugle Call” Series,” and carries a 1942 copyright by U. S. Services Supplies, Inc. Chicago. You will find examples from the set below; there are ten in the set; the individual titles are:  Assembly, Attention, First Call, Guard Mount, Mess Call, Pay Call, Reveille, Taps, Sick Call, and Tattoo. 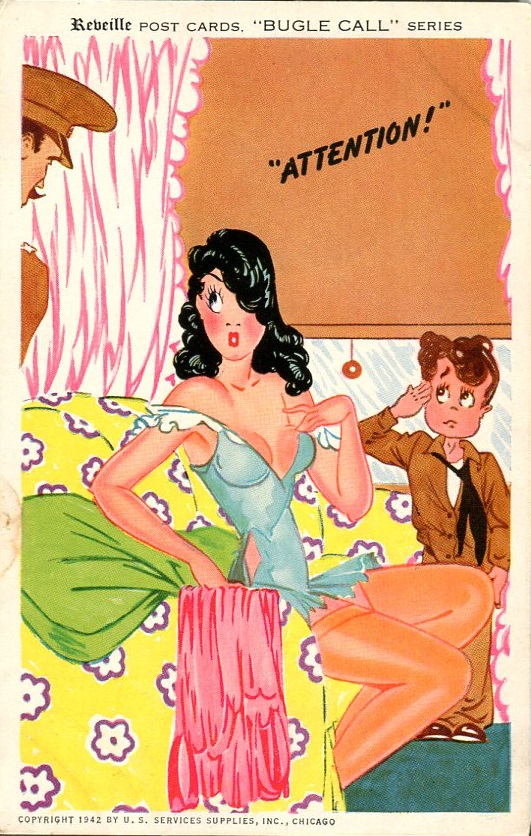 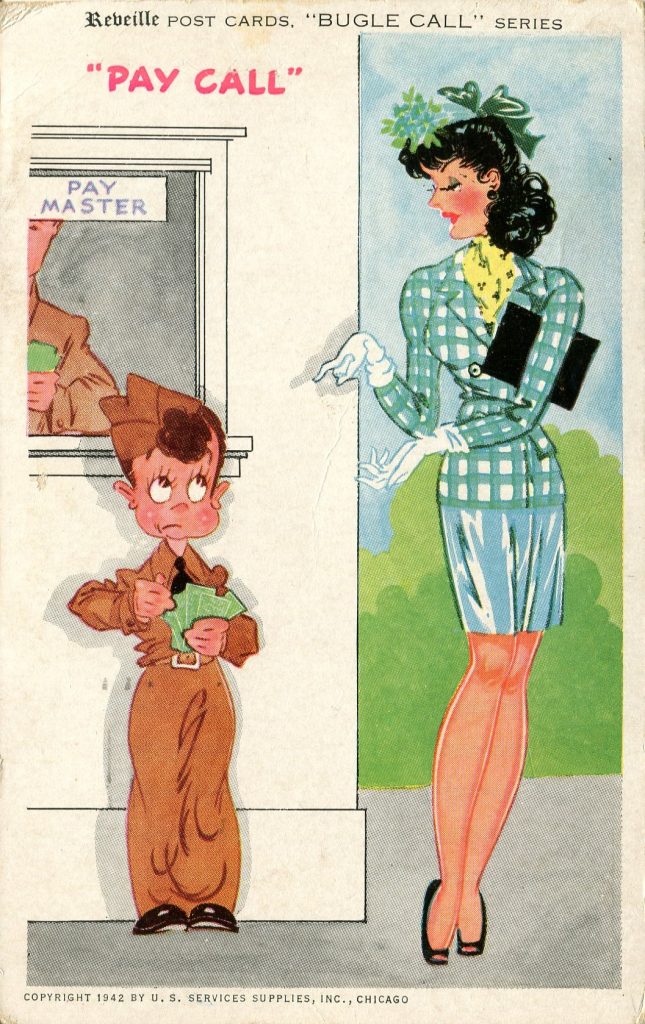 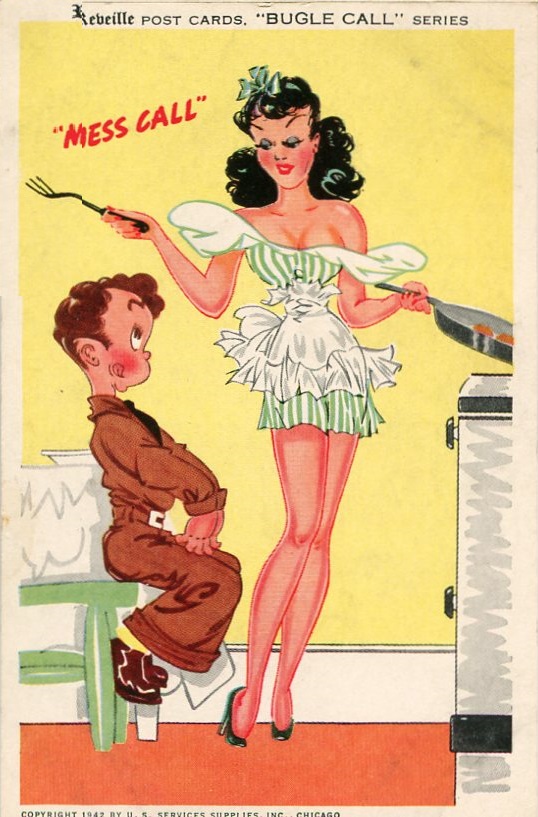 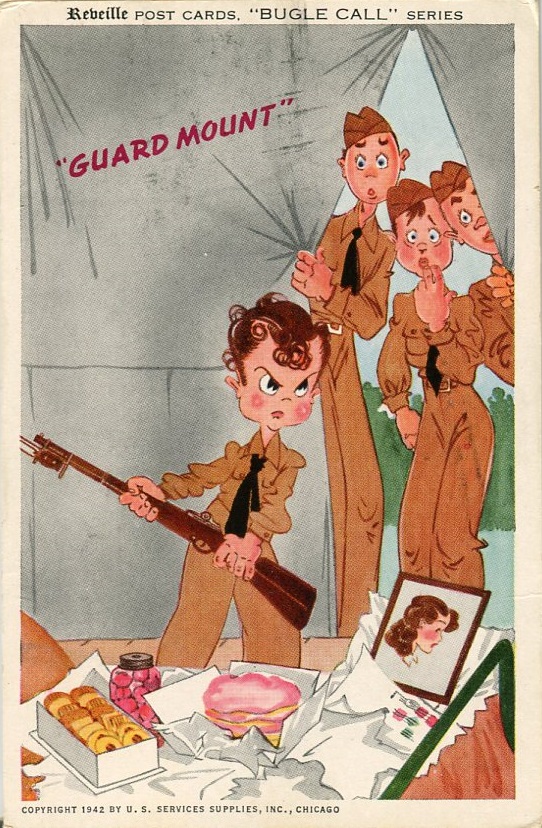 My curiosity about this set developed because of the message on the Pay Call card seen above. The theme is a common dominant woman/diminutive man card but with a military nuance. Most interesting is that the message refers more to the image than the weather that he mentions as, ‘beautiful.’

I have never been bashful about using the telephone to ask people questions.  Throughout my career as a librarian making telephone calls was a standard way of doing business. Recently I called a wonderful lady who was simply thrilled to talk to me about her father – the same man who mailed this postcard to his family. I want to confess that this call is one I will remember forever – it was the only one that when the call ended, I was crying with joy!

In civilian life, PFC Horace “Lee” Lapalm was a Massachusetts iron worker; skilled as a blacksmith but was equally familiar within his trade as a forge man and hammerman.

Have you ever heard the term SNAFU? It’s an acronym for, Situation Normal All F’ed (explitive deleted) Up. Lee Lapalm was a perfect example. He was assigned to be the unit cook!

In February 1946, from Corozal, Canal Zone, Lee wrote this message to Mr. & Mrs. Lawton, Laurel Hill Farm, Williamsburg, Massachusetts.  The Lawtons were his brother and sister-in-law; Ralph and Ruby. The message reads:

Here’s how the boys down in Panama spend their pay. The women sure do know when the boys get paid. They’re right outside the gate waiting for them. Hope old man winter is loosening his grip up there. It’s beautiful down here.

Shortly after mailing this card, Lee was promoted and left the Canal Zone as Sergeant Lapalm. The war was nearly over but Lee was still in the Army. With just a bit of persuasion, he convinced the army to allow him to finish his enlistment as the principal chef at the Veteran’s Hospital in Leeds, Massachusetts.

In a recent telephone conversation with Sergeant Lapalm’s daughter Paulette, she told me her father loved his time in the Zone, and never regretted being the company cook.  He was very proud of the meals he prepared for the officers and his fellow enlisted men. “He had a special way with a rump roast,” she said, “he could make it taste like the most expensive meat you ever ate.”

Paulette told me her father really liked working at the hospital.  He loved to be around people, and on some special occasions he would ask his wife to join him in serving the officers who were hospital patients.  Paulette remembers her mother, Adeline, dressing in a waitress’s uniform and going off to work with Lee.  “They always held hands as they walked to the car.”

Lee Lapalm continued his service to America’s veterans for the rest of his life.  He worked as the chef at the hospital until he retired in 1982.

Lee passed away on June 5, 1997; his wife Adeline in 1999. They are interred in the Village Hill Cemetery in Williamsburg, Massachusetts.

The Lapalms had two children: Paulette and Donald. Donald passed away in 1999; Paulette still lives in Massachusetts. When we talked, she told me about her trip to Panama.  She simply had to see for herself the places her father talked about.

Wonderful, and how nice you were able to phone visit with their daughter. These stories give us a boost, oftentimes. Thank you very much.