for a biography is wanting 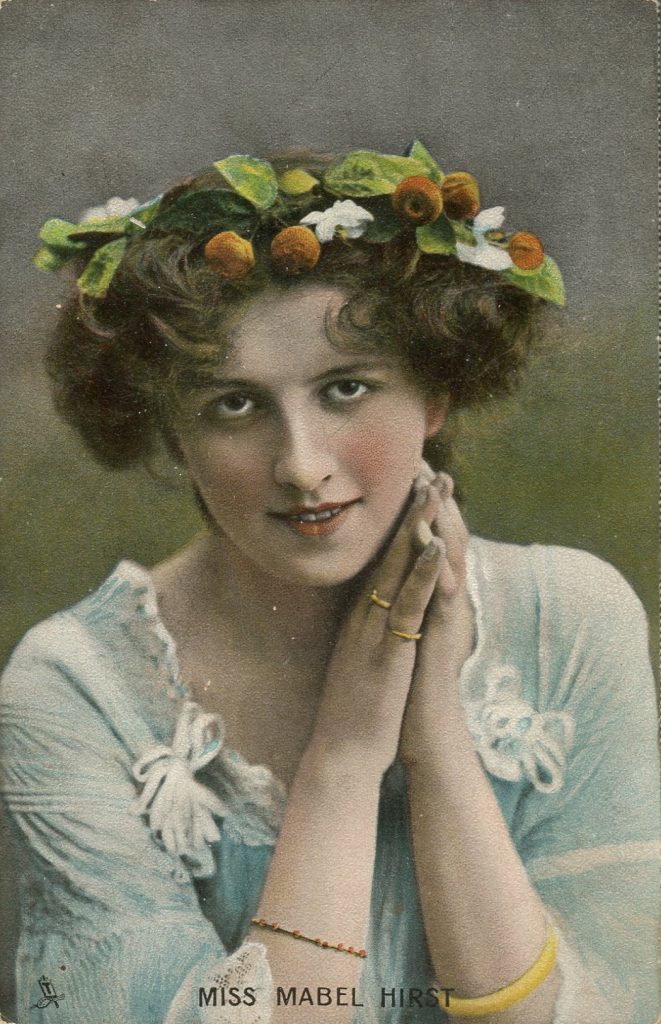 If you have been looking for an American postcard of Miss Mabel Hirst; stop looking. It is time to quit my search. With a high-degree of certainty, I can say, “There are none.” There aren’t many to begin with and throughout my twenty-plus years of searches only four have been found, not to mention a scattered few real-photos. In the United Kingdom, is the most reliable source of cards featuring this beautiful and very mysterious woman. The diligent collector may find one occasionally at one of the big London Fairs, but seldom is the case. There are all the usual UK publishers: Tuck, Ralph Dunn, Philco, and Faulkner, and do I need to tell you the Tuck card is the best?

First and foremost, Mabel Hirst was an Edwardian era stage actress, but in spite of her celebrity, the Europeana Corporation (a European media image company) has only one stock photo of Miss Hirst. It is a circa 1903 black & white photo identical to the image on the card I have included here. The summary description from their catalog is, “Young lady wearing a posie of flowers in her hair.”

If you have already fallen in love with Mable, and you want more, the only virtual haven left to explore is the Tuck Database at . When you search from the homepage enter: CELEBRITIES OF THE STAGE, 4406-4449. The internal search will take you to a multi-card set in which you will find Miss Hirst pictured on four cards found in four different sets numbered 4417, 4419, 4420, and 4428.

In spite of her unusually short filmography – one title – Miss Hirst does appear in the National Portrait Gallery (London) as a film star. The one credit is Then You’ll Remember Me. The rather hokey story tells of how a fisherman adopts a foundling child who becomes an opera diva with medical concerns, including amnesia. The film, as it appeared in June 1918, was directed by Edith Mellor, who was credited as Edward Waltyre, written by Edith Mellor and starred Lionel d’Aragon, Mabel Hirst and Babs Reynolds.

Kaya Fellcheck is an optometrist by trade and has practiced her profession in England’s Lake District for nearly four decades. Soon to be retired, Kaya intends to come to America to visit the graves of Hollywood movie celebrities whose photos she has collected.
PrevPrevious“Bugle Call” Postcards
NextJosephine Baker More Than A Film StarNext
5 Comments
Oldest
Newest Most Voted
Inline Feedbacks
View all comments
Henry Higgins

This is an interesting article… but all of your articles are very informative !

There are a number of postcards of Miss Hirst on ebay UK mainly from Germany and France but a few from UK sellers, one of the nicest is a couple of pictures of her with a large “H” and flowers as a background also the one you show in the article 🙂

After searching through my Edwardian actress book I couldn’t find any reference to Miss Hirst anthough I did find several articles in the News Archive ranging from 1903 to 1919, I have added them to my Facebook page and have included the link if anyone wishes to take a look. https://www.facebook.com/permalink.php?story_fbid=1538175653028399&id=100005079378665

That movie sounds completely hokey! But I’m glad Miss Mabel had the opportunity to appear on the silver screen. I imagine it was her life’s dream.

Ms. Fellcheck ought to research and write the bio of Ms. Hirst.