More Than a Film Star

As you read this short history of Josephine Baker’s life and view the images on her cards, ask yourself, “Does she deserve more recognition in her native country?”

Josephine Baker was born June 3, 1906 in St. Louis, Missouri, the daughter of Carrie McDonald. Her birth name was Freda Josephine McDonald. Her father’s name was unrecorded. Josephine felt he was white and her mother had worked for a German family around the time she became pregnant.

Her mother had been adopted in Little Rock, Arkansas in 1886 by Richard and Elvira McDonald, both of whom had been former slaves, descendants of African and Native Americans. When Josephine was eight years old, she was sent to work for a white family who so abused her that she ended up in the hospital. Carrie was forced to take her child back.

At age 10, Josephine was given food and clothing in exchange for working for the Joneses, a family of traveling musicians. She found happiness in show business. She continued her life as a hired girl, leaving the Joneses but finding other work until December 1919 when she married Willie Wells at age 13. They lived in a rented room with Willie doing menial jobs. Josephine frequented a nearby theater which brought in vaudeville acts and it was there that her entertainment talents were discovered.

Josephine left Willie Wells and moved to Memphis, the blues capital of America. She worked there as a dresser, taking care of costumes and props. She was also given time on stage for bit parts. She loved to perform and was noticed. After traveling through the South, the company arrived in Philadelphia in 1921. There Josephine met Billy Baker, the son of a restaurant owner. At age 15, she married Billy and moved in with his parents over the restaurant. She would sleep during the day, perform at the theater at night, and return faithfully after each show.

Seeking a better life, Josephine went to New York to try out for Shuffle Along. When she got there, she recalled, she was found “too young, too small, too thin, too ugly and too dark.” Disappointed, she returned to Philadelphia. When Baker turned 16, though, she landed a job with the show’s touring company. She reported that the other girls in the tour looked down on her because she was too dark. This had to be tough as all her life she was told she was too light. Her marriage to Billy was short. She would, however, keep his name for life.

In 1925, Baker sailed for France with a troupe of two dozen black singers, dancers, and musicians. In Paris they performed “La Revue Négre,” which launched her career. Of her performance, the New Yorker wrote “her magnificent dark body, a new model to the French, proved for the first time that black was beautiful.”

Baker moved on to the Folies-Bergére, where the costume designers created a semi-nude costume of bananas on a G-string for her. It became the rage of two continents. 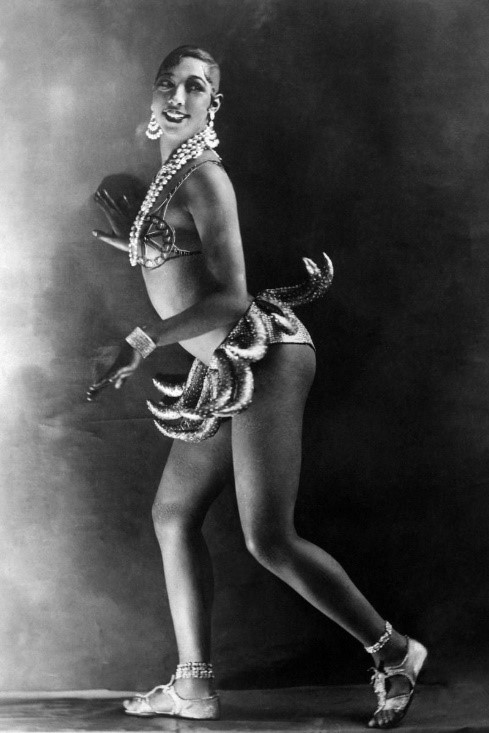 Josephine Baker in her banana costume.
The card is dated 1939, produced by Walery of Paris, number 102 of the series. Walery produced more cards of Josephine than any other firm.

While it is obvious why the French males admired her, her appeal to French women was more complex. They had taken on major roles during World War I but after the war they were returned to their pre-war role. They could not vote, enter a profession, or be involved in politics. They could not even open a bank account.

French women saw Baker as their heroine. By the fall of 1926, there were Josephine Baker dolls, costumes, and perfumes. The women of Paris wanted her look. She became an icon for the French women’s rights movement.

At age 20, Baker fell in love again. She met Pepito de Abatino, a Sicilian gigolo who spoke four languages. A self-proclaimed count who was penniless yet traveled in all the right circles, Pepito became her manager and took as his first task to provide her with an education. He saw to it that she learned to read and write and speak proper French. He educated her in music, art, and the social graces. Once introduced to learning, she never stopped.

By 1930, Baker had begun to mature. She and Pepito moved to a large estate outside of Paris where she collected unwanted animals. In 1931, one reporter said, “She left us a Negresse, droll and primitive; she comes back a great artist.” In the early 1930’s, Josephine began a successful recording career and stared in several motion pictures. 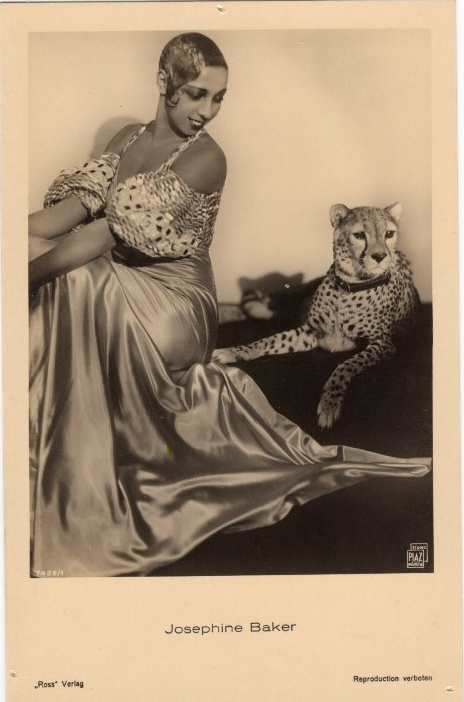 Josephine in a leopard outfit with her pet leopard. The card was produced by Studio Diza Paris of a photo taken by Ross Verlag.

She felt, however, she still had her home country to conquer. In 1935, she went to New York to perform in the “Ziegfeld Follies,” where she starred with Fanny Brice and Bob Hope. However, her appearance drew disastrous reviews, which she blamed on Pepito. So angry was he that he left New York for Paris and never spoke to Josephine again. He died a few months later.

Baker returned to Paris in 1937, married Frenchman Jean Lion, and became a French citizen. Her love for France was so great that when the war broke out, she volunteered to spy for France. She became an “honorable correspondent,” smuggling intelligence to the resistance in Portugal coded within her sheet music. After the war, she was awarded the Croix de guerre, the Rosette de la Resistance, and was made a Chevalier of the Legion d’honneur.

In 1947, Baker married Jo Bouillon. The marriage would last ten years until they divorced in 1957. 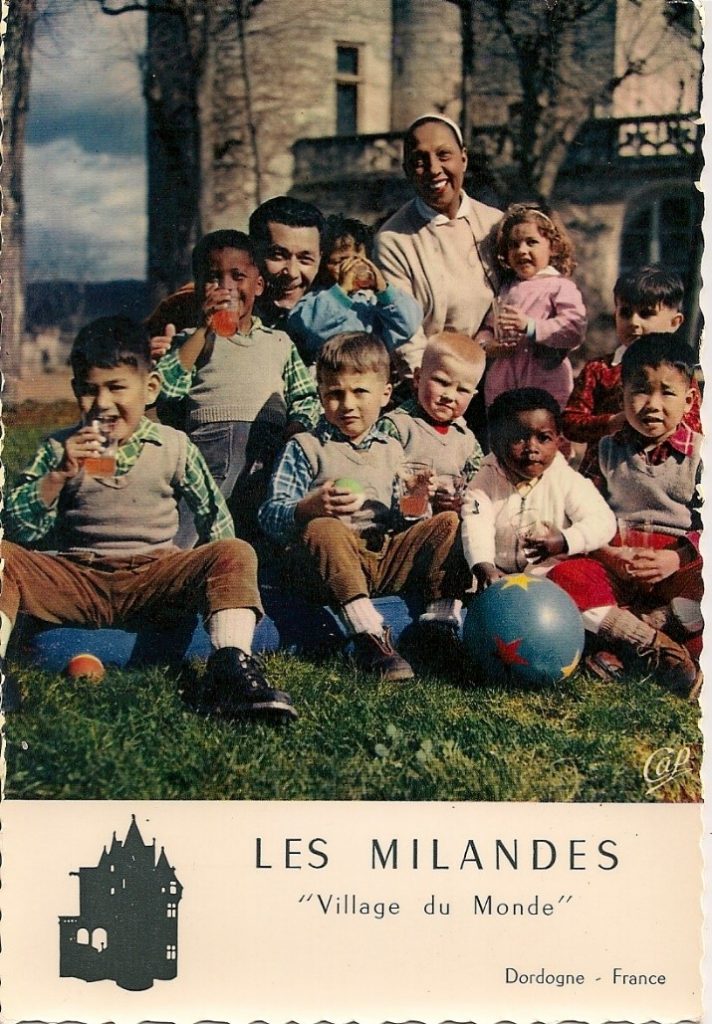 Postcard of Josephine Baker and Jo Bouillon
with the “Rainbow Tribe,” unmailed.

In 1951, while in New York City, she attempted to eat at the Stork Club where she was refused service. Actress Grace Kelly, seeing what had happened, rushed over and the two stormed out of the club. They remained good friends until her death.

In 1963, during the march on Washington, Baker was on the podium beside Martin Luther King, Jr. She was the only woman to speak that day. 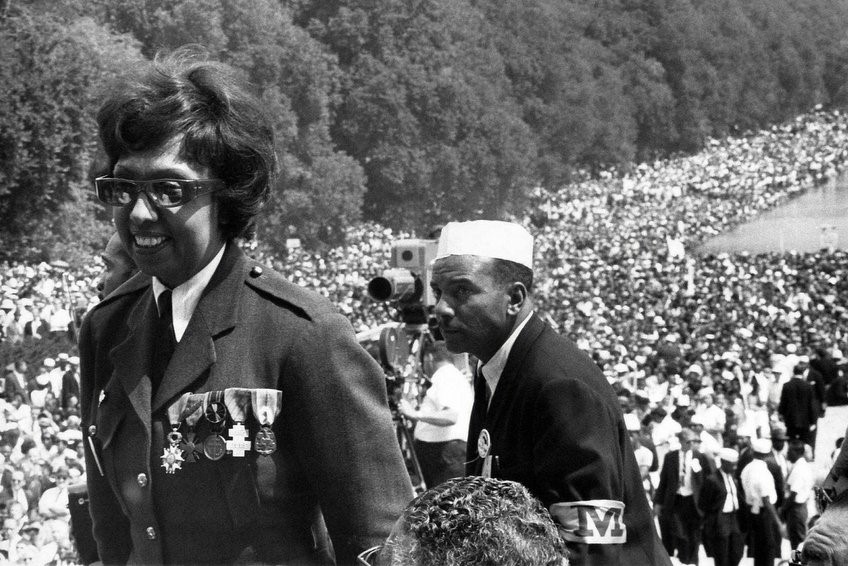 Photograph of Josephine Baker at the 1963 March on Washington.

In January 1966, Fidel Castro asked her to perform in Havana, Cuba. Her show was seen by record breaking crowds.

Few can question her role as a civil rights activist. When Baker came to New York in 1973 to perform at Carnegie Hall, she required the theaters to not only hire black workers but to allow blacks to sit at the front of the theater.

On April 8, 1975, to celebrate her 50 years of performances, Prince Rainier and Princess Grace of Monaco, and Jacqueline Kennedy Onassis financed a retrospective revue at the Théâtre Bobino in Paris. The star was none other than Josephine Baker herself.

Four days later, she was found in her bed in a coma. She died later that day at age 68.

Josephine Baker was the first American woman to receive a funeral with full French military honors. There is no song that is more identified with her than “J’ai Deux Amours [I Have Two Loves].” https://www.youtube.com/watch?v=suPSPKpF8SY

End Notes
1.The cover of the 2010 auction catalogue of Ken Oden collection is courtesy of Jackson’s International Auctioneers, Cedar Falls, Iowa U.S.A.
2. This article appeared in different form in the June 2014 issue of American Philatelist.

Tony Crumbley has been a collector of stamps and postal history since childhood. He has authored numerous articles over his career as a philatelist. He is the current Co-Editor of the North Carolina Postal History Journal, a job he has had for over 25 years. He is a General in the Civil War Philatelic Society where he served as president. He lives with his wife, Renea, in Charlotte, North Carolina, and is the retired Vice President of Research for the Charlotte Chamber of Commerce.
PrevPreviousAdmire Her Beauty, for a biography is wanting
NextCowboy Kings of Western Fame A Set of 25 PostcardsNext
5 Comments
Oldest
Newest Most Voted
Inline Feedbacks
View all comments
Mary Schaefer

Talk about learning about history through postcards, this article is a wonder example. Josephine Baker’s reputation is no where near as exciting and interesting as her real life. Her biography clearly is waiting to be made into a movie.
Thank you for this article. I need to know more about her.

I remember seeing a sign for Josephine Baker Boulevard when I was in St. Louis about twenty years ago. With so much call for removing mentions of segregationists and slave owners from significant structures, perhaps Baker will be commemorated by having schools or community centers renamed in her honor.

What a wonderful look at the life of a wonderful lady 🙂 So much that I did not know about her, so Thanks for this.

I agree with these individuals below…I would love to know and learn more about this incredible lady. Seldom do we see older postcards of Josephine Baker. Thank you so much for this story and illustrations and the video that follows. I can’t get enough of Josephine Baker.

What an amazing story of a truly uniquely talented woman!! She learned everything and worked very hard to achieve excellence. To put her life on the line turbine the war was extraordinary and brave. To adopt her tribe was done out of a heart of love!!! And, it taught the world that people of various backgrounds can live together!!! An amazing woman!!!!!