A Story of One Postcard 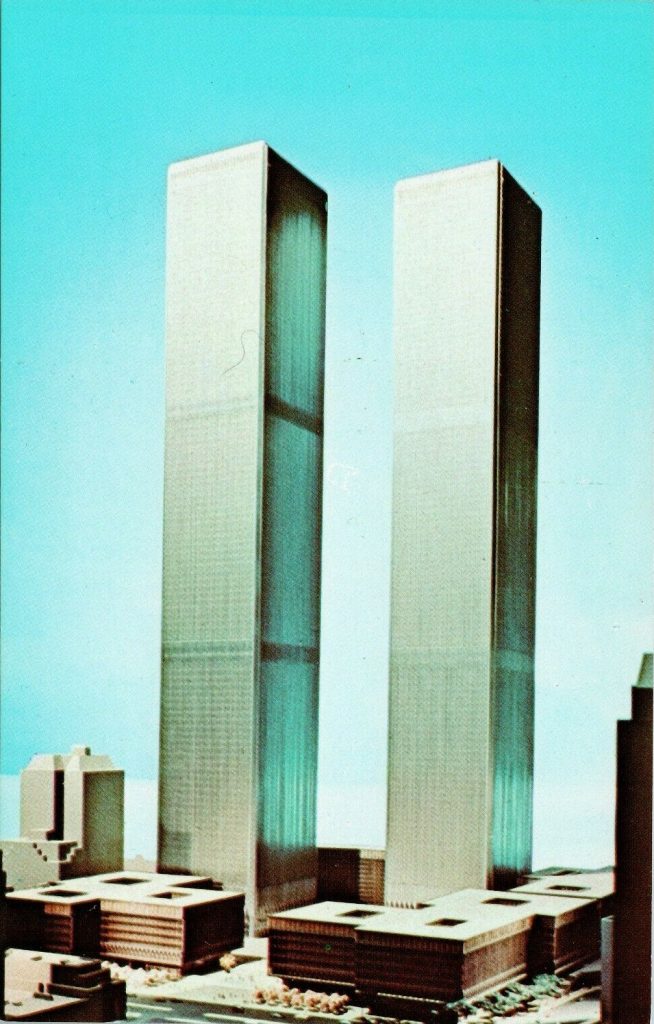 This image and this story were unsolicited. They arrived as email attachments on this editor’s desk just a few days ago. Postcard History is proud to re-tell the story and present the image.

The story was just a bit more than 200 words – less than half the number of words we usually put “In A Few Words” article.  Nevertheless those words told of the sale of the card by one of eBay’s prominent postcard dealers. It reminds each of us that in the midst of an American tragedy we know how to be kind to one another and deal with adversity with grace and prudence.

The image on the other hand is history itself. We look at life and see and mostly remember the sights we see based on color, light, detail and form. In this case however nearly everything we see on this postcard is totally not what we think it is.

The Story as told by Refried Jeans.
We placed a postcard exactly like this one on eBay for a 10-day auction on September 1, 2001. The auction would end on September 11. It was the only World Trade Center postcard for sale on eBay ending on that date.

Because it was not posted after the attack, eBay let it run its course.

While we were watching the events unfold on our television, we got lots of emails castigating us for listing it, saying it was in poor taste. The fact was, we didn’t remember we had listed it.

The auction started at $5. It ended up with a bid of over $300. But, the story didn’t end there. The guy who won the auction didn’t really want it, he just wanted to zap a negative on anybody carrying WTC items.

After the second high bidder also declined getting the card, saying they just got caught up in the emotions of that tragic day, we decided to sell it for $5 to the only person who had placed a bid before the terrorist attack.  They were grateful and apparently made a donation to the victim’s families because of it.

All of this is pretty meaningless, compared to the awful things that happened on September 11, 2001, but nevertheless, it was an odd twist in our own lives.

When the image opened in my imaging software those few days ago, I recognized immediately that it was different than most World Trade Center postcards. It generated an instant mystery; a mystery that demanded an equally instant solution.

Luckily after so many years – it’s nearly forty now – I have many friends and acquaintances who are willing to share what they have learned from their collections. With this in mind I emailed a scan of the card to a history professor I know in California. He grew up in the St. George section of Bayonne, New Jersey, literally in the shadow of the World Trade Center. Since then, he has literally created within himself an expert in nearly all things concerning the WTC. His reply came within the hour; he wrote:

The Postcard upon examination.
This card is not a photograph of the World Trade Center; it is a photograph of the architect’s model. It is not a rare card, but it is scarce. The architectural plans never intended to have aerials built atop the towers, at the time it was thought that such structures would be aviation hazards to local helicopter traffic. 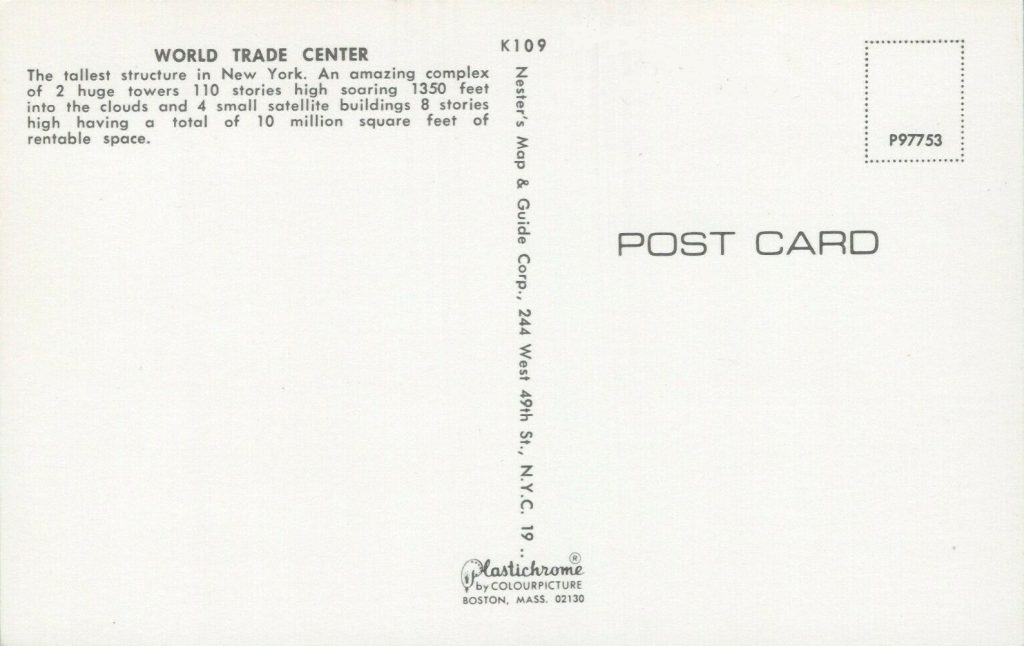 The caption on the card reads like the entire facility is built and waiting for occupants – not true. At the time this card was published, the towers were being constructed (August 1966, opening in April 1973) with only four satellite buildings planned; but five were built.

The caption also understates the available square footage. The card reads 10 million, where in fact there are 13.5 million.

Not rare but scarce. Words from an authority. Refried Jeans sold it for five dollars.

An interesting bit of postcard history!

Ed Bangs
I have just found a post card showing one twin tower with a aerial on top.T he card from the New York Convention & Visitors Bureau Inc.No date on card.

Very interesting. First time I have seen this site. I have many post cards from collections from my husbands aunts. Am looking forward to learning about the different cards. Our daughters tell us to “start getting rid of stuff” so they don’t have to!!!!!