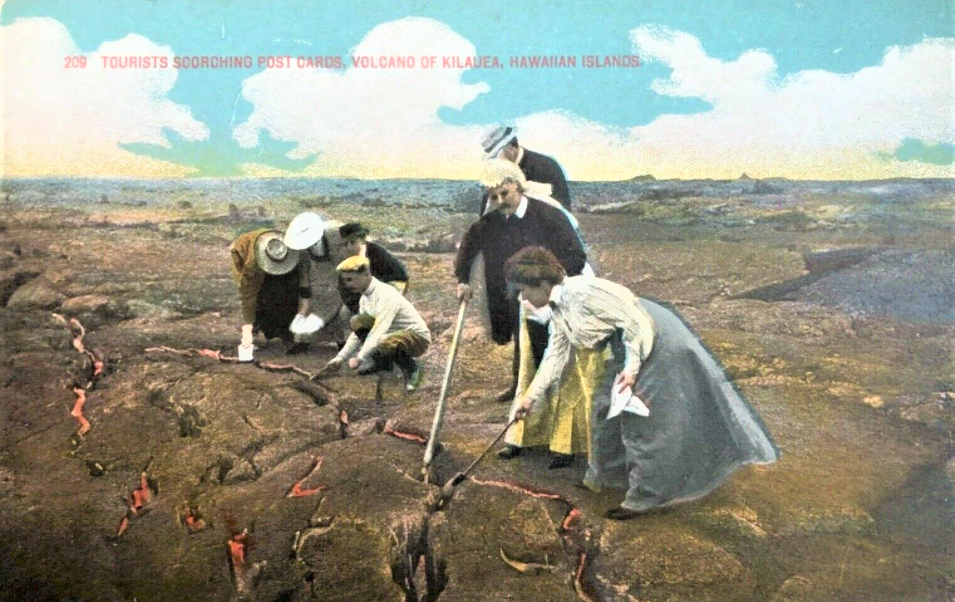 If you were a tourist on the Island of Hawai’i in the first two decades of the 20th century and you were among those permitted a walk on Kilauea’s caldera, you could do what the tourists on the postcard above are doing. You could scorch the postcards you planned to send home in the molten lava of the volcano.

These Private Mailing Cards were published by the Island Curio Company, Honolulu in the early 1900s. Somewhat surprising is the longevity of their availability and use. Cards mailed with postmarks from 1906 to 1921 have been found. Similar cards, mailed in the 1930s, ‘40s and ‘50s, from an anonymously published series – already scorched – were often provided to hotel guests who were less adventuresome. 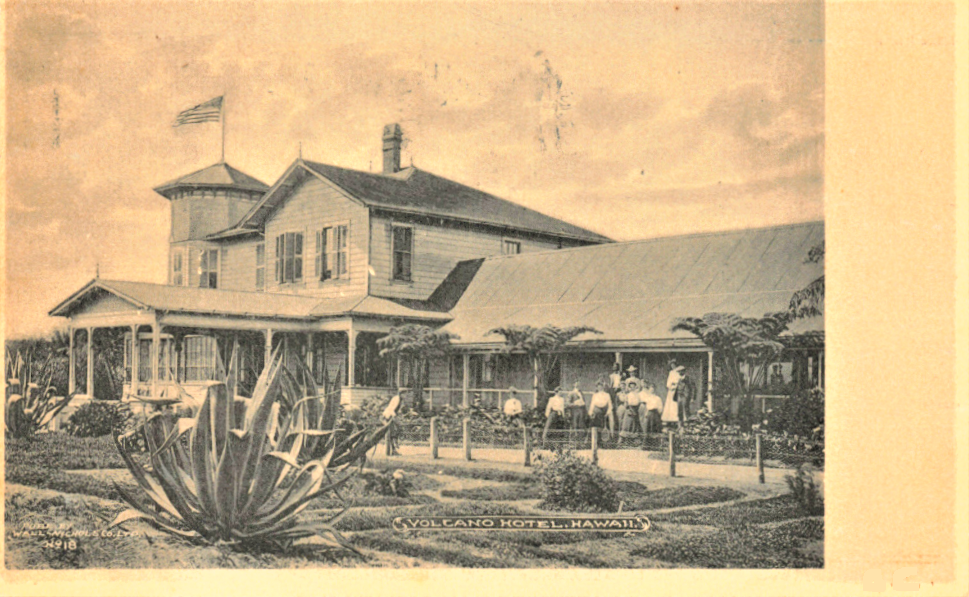 From the late 1890s tourists visiting Kilauea would preferably stay at the Volcano Hotel. Here tourist would enjoy hotel life. Card games, horseback riding, and if one were so inclined, they joined a four-mile guided walking tour to the rim of the crater. Most tourists preferred mid-afternoon hikes as it gave them safe daytime sightseeing and a view of the glowing lava later in the evening. Those guests who reserved the early morning tours were often treated to a cooked over the lava breakfast of eggs and potatoes complete with brewed coffee. 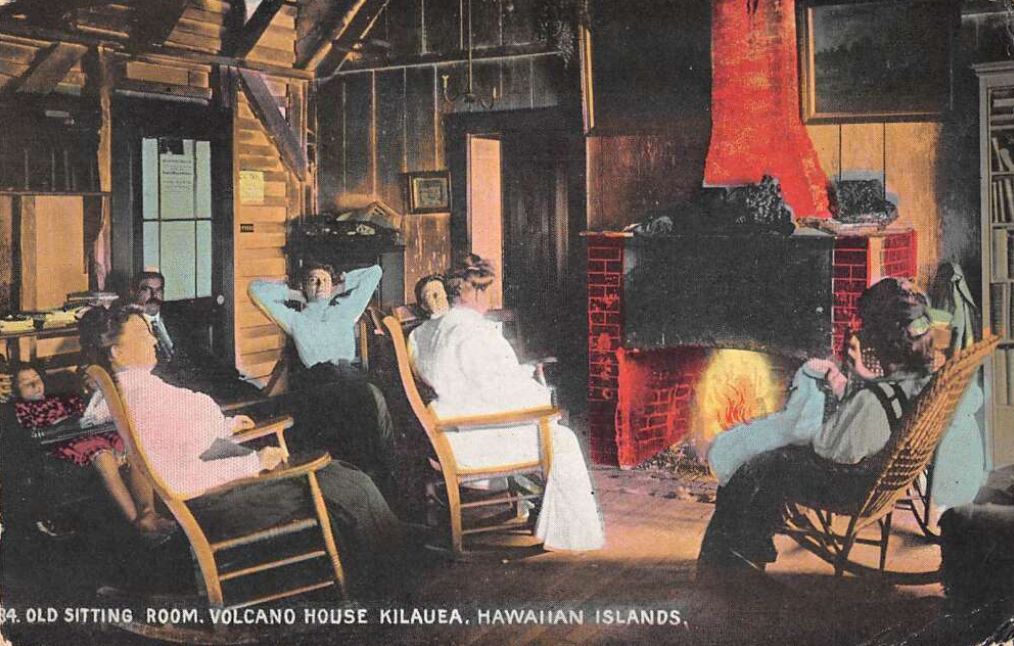 Volcano House and the trail to the crater still exist, but access to the caldera was closed in 2008 due to the active nature of the volcano and carbon dioxide gas emissions.

Few scorched postcards remain, but occasionally one can still be found on the internet, but they command high ($50) prices.

If your recall of current events is sharp, you most likely remember the name Kilauea from the news of May 2018. Prior to the June 28, 2018 and the first day-of-quiet, September 4th, Kilauea has been in a state of continuous eruption since 1983.) The extensive damage cost-estimates are between 200 to 600 billion dollars.

Let me introduce you to someone who received a scorched postcard from Kilauea. 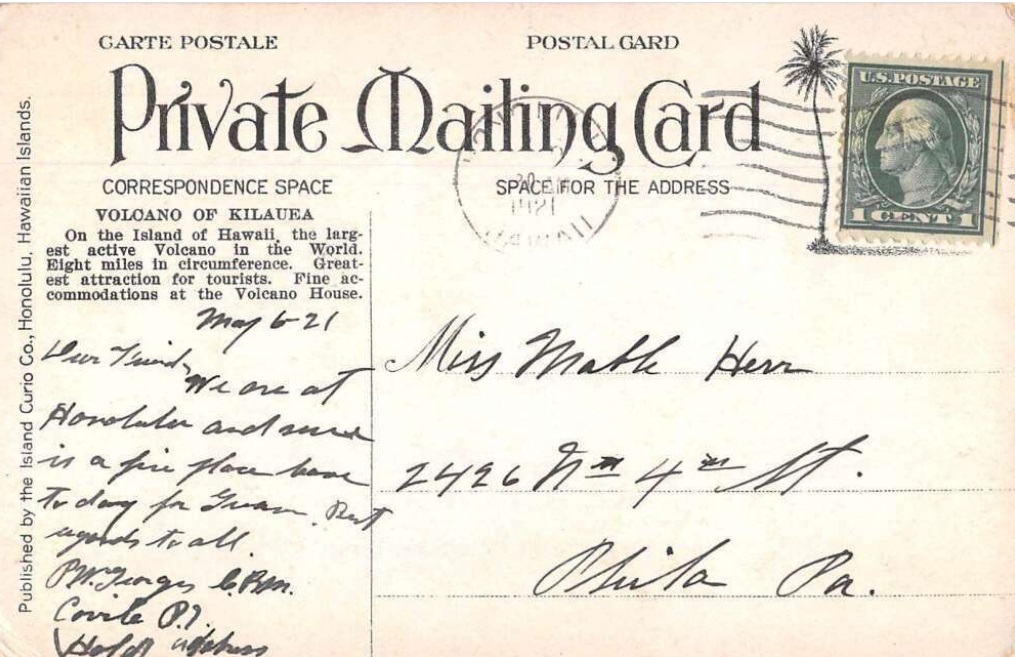 In May 1921, Miss Mable (more accurately, Maybell Herr was the 22-year-old, unmarried daughter of Louis and Rosa Herr. Maybell lived with her parents and Violet, her 14-year-old sister, in a red-brick rowhouse on North Fourth Street in Philadelphia. Mr. Herr worked as a machinist. Rosa kept the house and Maybell worked as a looper and Violet worked as an examiner in the hosiery factory. The following year Maybell married William Pascal Knotts.

Bill Knots was born in Iowa in 1893 and like so many in his time, at age 20 he joined the United States Marine Corps at League Island, Philadelphia. Private Knotts began his service on May 15, 1917. His first assignment after basic training was a supply transport to Pearl Harbor as a member of 2nd Company, 1st Regiment on board the USS Carib. He served until August 1919 but saw action in the American Expeditionary Forces in Cuba during the events that later became known as the Sugar Intervention.

After their marriage in 1922 Bill and Mabel lived in Evansville, Indiana for a short time and in the late 1930s returned to Bill’s family home at 92 Roselyn Street in the Olney section of Philadelphia. As a very successful insurance agent, Bill lived until 1964. Mary survived her husband by twenty years. They are buried together in the National Cemetery at Beverly, New Jersey.

[Editor’s Staff wishes to thank Postcard History reader Ron Pollard for his contribution to this article.
Ron is a member of the New South Wales Postcard Collectors Society in Sydney, Australia.]

Never realized this practice occurred. Obviously today’s litigious society would never permit tourists to scorch their cards as they could a century ago.