I remember the summer of 1960 and sitting on a beach listening to Brian Hyland sing the song Itsy Bitsy Teenie Weenie Yellow Polka Dot Bikini. I do not recall seeing such a bathing suit, but in the sixty years since then while looking through thousands of cards, I have yet to find a postcard of a yellow polka dot bikini. Other colors are there but not yellow. 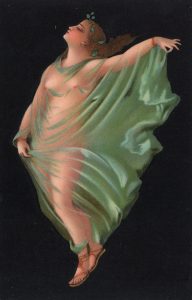 In September 2020, Ansel Pereira, an online writer for the music industry, published an article on the 100 best songs with clothing items in their titles. Itsy Bitsy Teenie Weenie Yellow Polka Dot Bikini came in number three. It inspired this article.

The birth of the bathing suit is unknown. We do know that during the Roman empire, communal bathhouses were an important part of society. Some images from the bath houses of Pompeii (prior to 79 AD) show women in scant bathing clothes that were simple sheer drapes which they wore when they were out of the water. There are some chromolithographic postcards from the Stengel Company that show several of the Pompeiian murals.

Since that time, little or no bathing suit history has been written. They seem to have vanished for centuries. In the eighteenth century, bathing suits reappeared in the form of “bathing gowns.” Women wore those long dresses made from non-thinning material. These suits also featured little weights along the bottom to keep them from rising or floating. 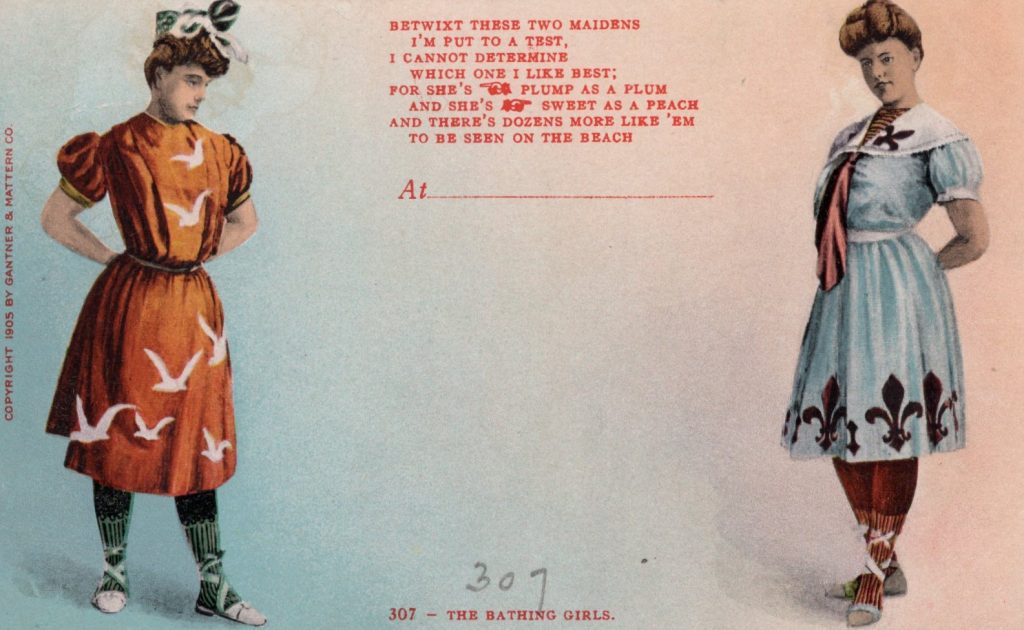 The earliest of those swimming dresses would have been longer and heavier than the ones shown on the card above, but by the 1800s the beginning of a revolution in swimwear began when women started going to beaches. As transportation improved and individuals could travel more frequently, beach bathing became more popular and by the mid-19th century bathing dresses were part of every woman’s wardrobe. 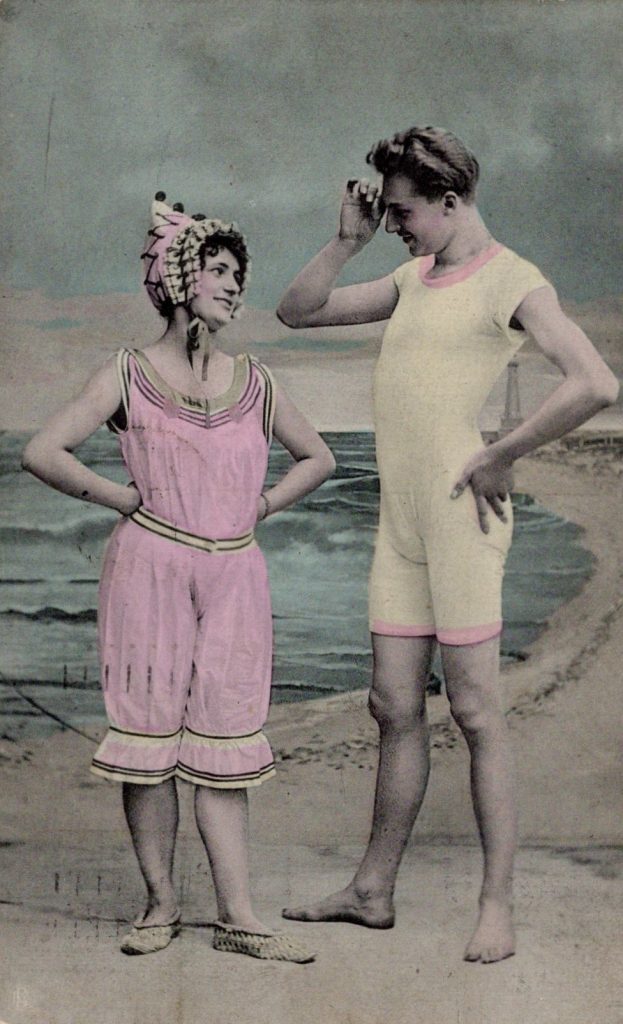 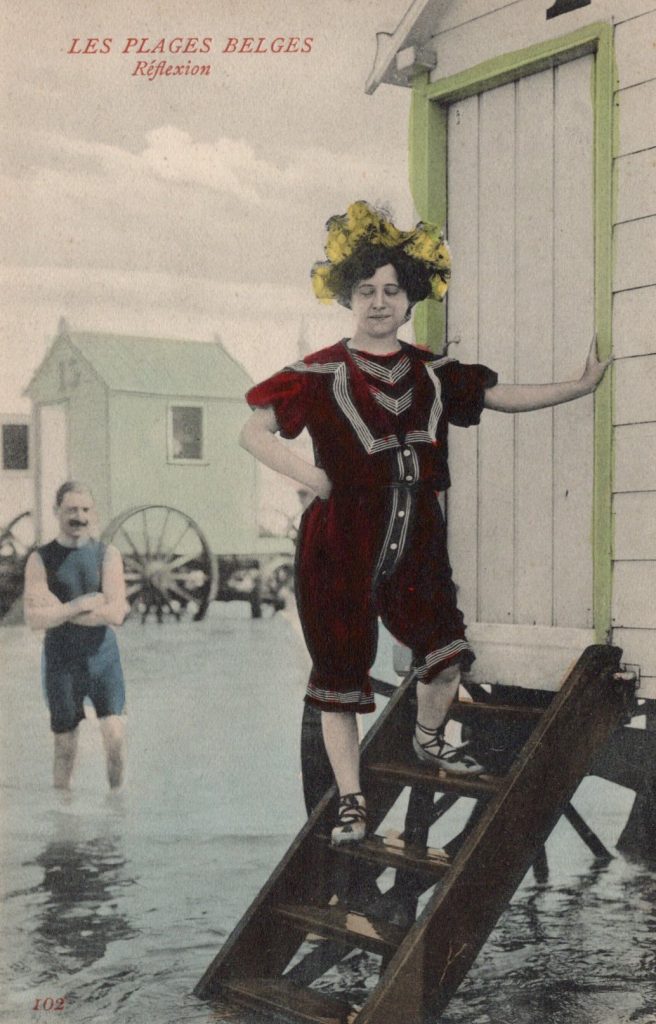 An 1864 Garment Book highlights a swimming suit as being a dress with a hem below the knees and bloomers down to the ankles. This is before the postcard era, but by the end of the 19th century swimming had become an “art.” It first became an intercollegiate and then an Olympic sport. Afterward, it was socially acceptable for women to swim. By 1880, the princess cut was introduced. It consisted of a blouse and trousers in one piece, like the pink version seen above. A ruffled cap or straw hat often completed the ensemble.

As the postcard era blossomed, near the beginning of the 20th century, new and daring swimwear began to appear.

Bathing machines were invented in the 19th century, and widely used in western Europe and South America. (A knowledgeable collector of bathing machine postcards told Postcard History’s editor that he has never found an American bathing machine postcard.)  These “machines” were small, one-room houses with built-in benches (some even had a window), on 48 to 52 inch wheels. Tourist and beach goers rented a “machine” by the day and the rent included two-trips into the seawater, one in the morning, with return around noon, and a second around two o’clock with a return about an hour before sunset. The mobile houses were usually pulled to the 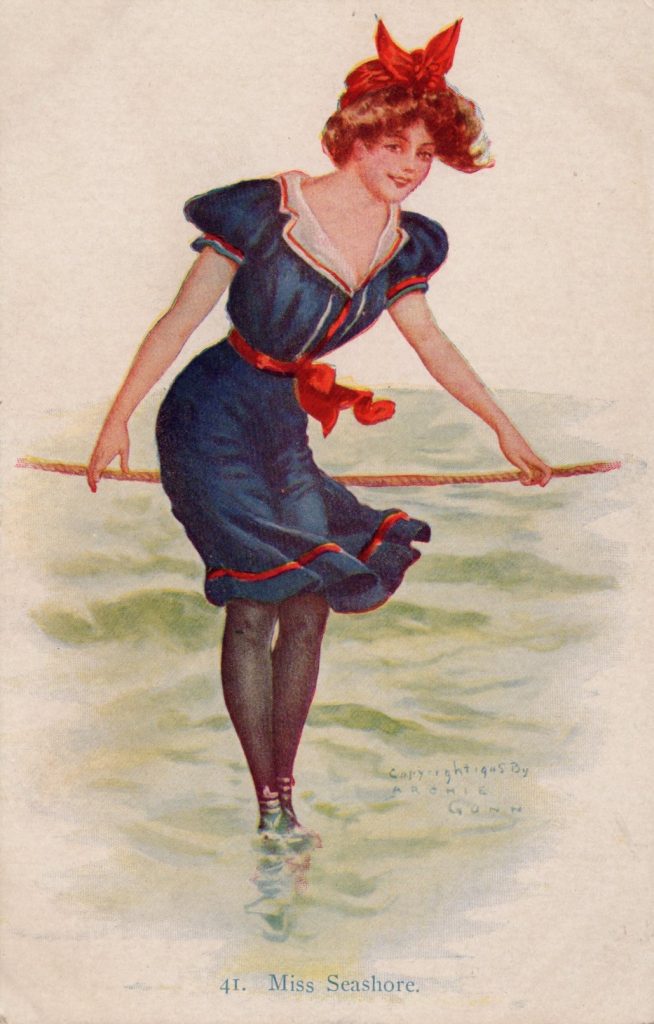 water by horses, but in some locations, mules were a worthy substitute. Contrary to popular belief bathing machines were not exclusively used by women.

Most women had little swimming experience, but to encourage beach activity in the early years of the 20th century ropes were often extended into the water for women to hold. Frequently the ropes were knotted at intervals to assist the bathers in staying within a reasonable distance from the shore. Bathers could then ride the waves and enjoy the water and still have a sense of security. This Archie Gunn card with a 1905 copyright shows a girl holding a rope wearing a swimming dress and the typical black hose of the time.

By the second decade of the 20th century women of all ages began to enjoy the sport of swimming. (Actually, very little swimming was done; standing in the water and jumping to avoid wave-splash is a much better description.) It was then that major changes in swimsuit design began. Heavy fabrics were replaced by lighter, but still dark colored cloth. More skin showed and it set society a twitter.

This young miss is wearing a 1920s style bathing suit. The card is a hand painted real photo card. 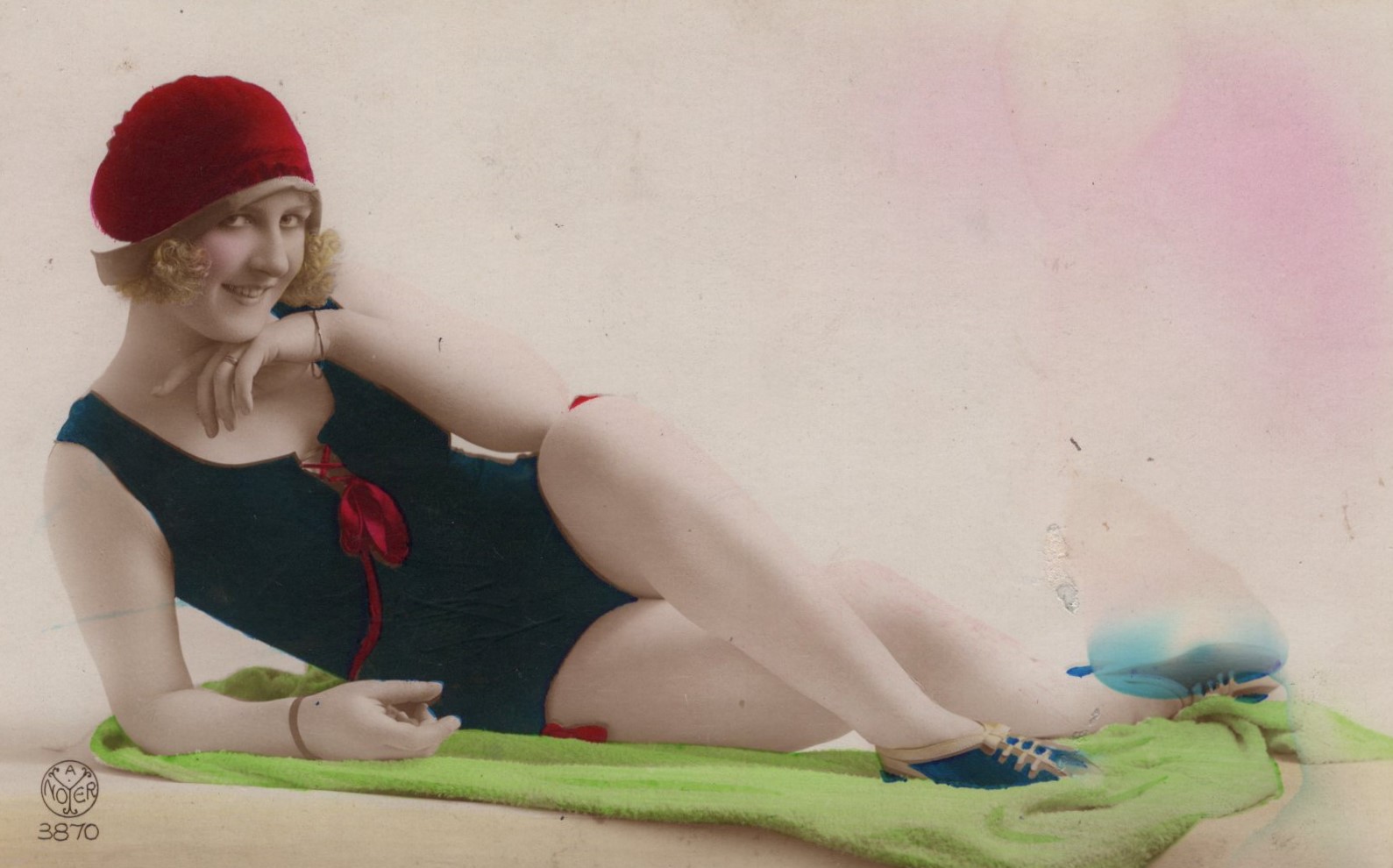 In the 1930s a new generation of designers turned out swimwear that was more functional, sleeker, and streamlined. The new styles hugged the body and was constructed to allow the straps to be lowered for tanning. Legs were exposed but mod 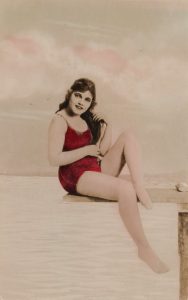 esty skirts were still a part of patterns until well into the next decade.

In the 1940s, much changed in America. Young men being sent to foreign countries to fight wars was by far the most influential phenomenon of the decade. They witnessed the difference in life-styles and liked what they saw. They even brought some of what they saw home to America. After the war, postcards of bathing beauties ready for tourists to send home were available in every beach town in America. 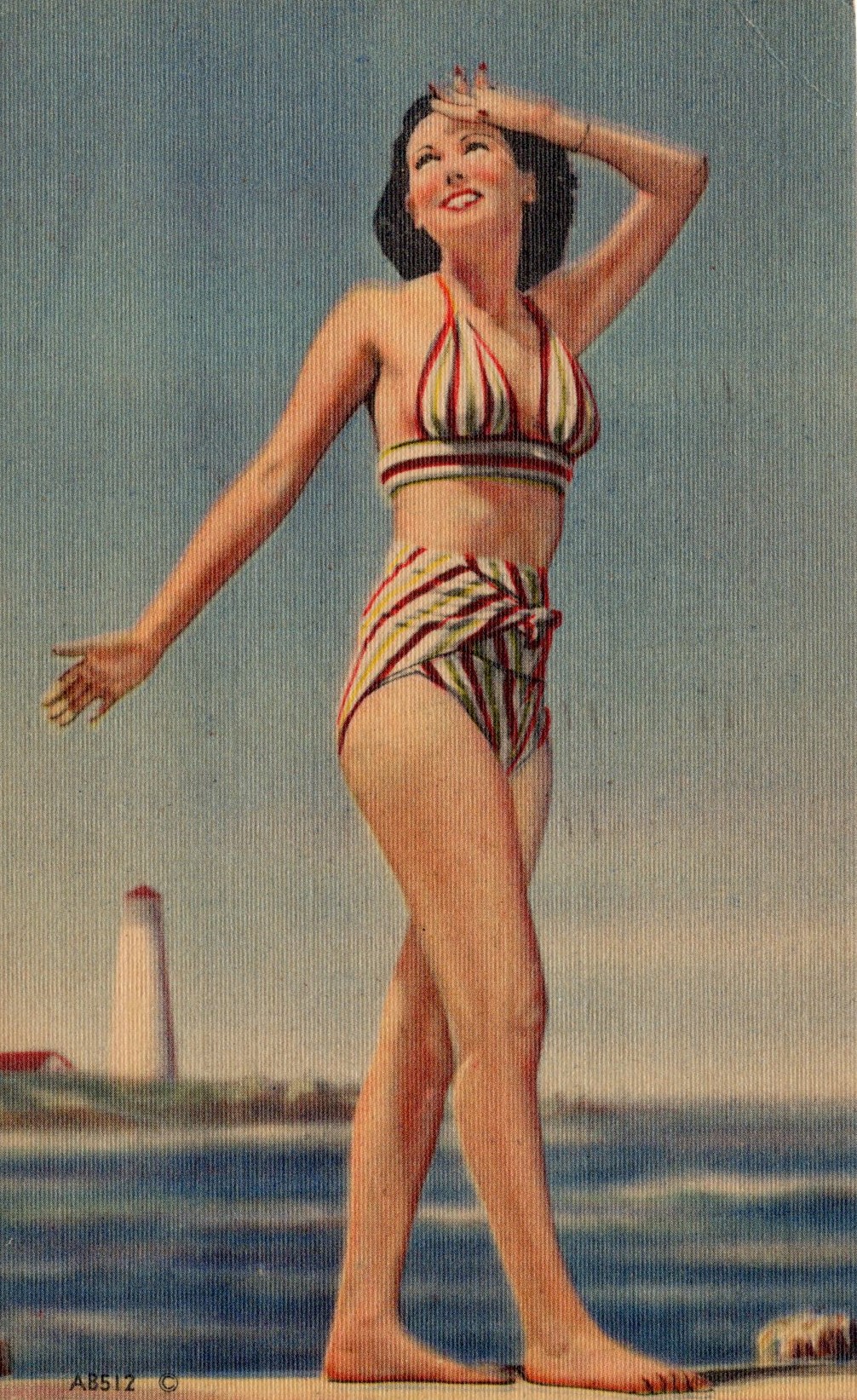 Louis Reard reintroduced the two piece suit in Paris. It was called a “bikini” after the island, Bikini Atoll, where the US had recently tested a nuclear weapon. The “bikini” in Paris was a similar explosion.

The wearing of the bikini style swimsuit was banned in most European countries until the mid-1960s and in public pools until the ‘70s. Very gradual acceptance began in the mid-1960s in America, but even then it was an uphill argument by feminist organizations and civil right activists that made it happen.

That Louis Reard creation led up to the development of the yellow polka dot bikini. Simply stated by a 1951 fashion world magazine as, “… four triangular pieces of very thin fabric that cover very little, tied together with narrow laces that performed no practical part of the design.”

The young miss on this 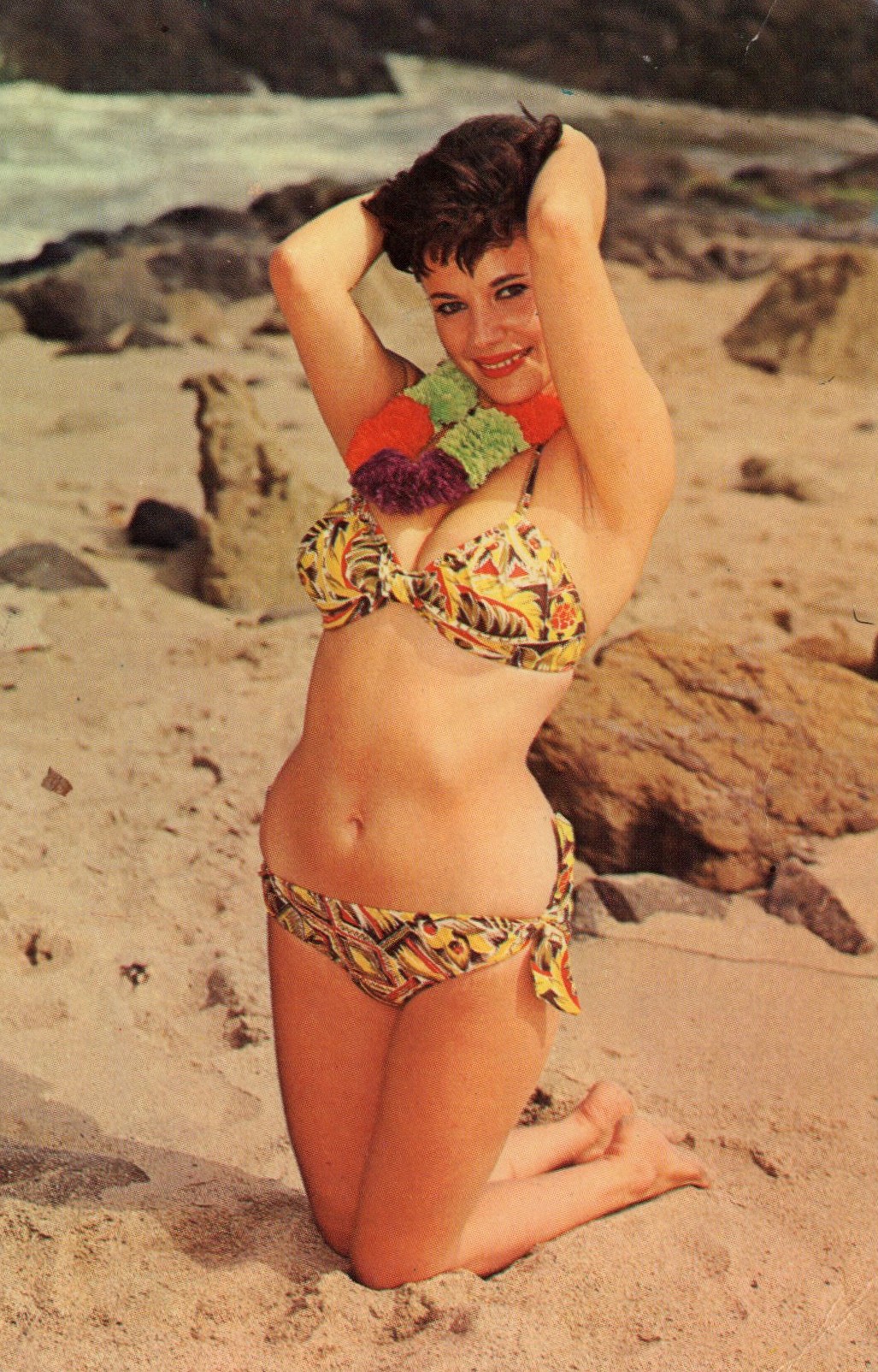 card, that was mailed in 1968 seems to have enough courage to have her photo appear on this ‘60s era postcard. I suspect many of us would wonder what she thinks of this picture today when she is likely over 70 years of age.

We can only assume that swimsuit design and development has continued, but much of what we will likely see in the future may be a return to the attire of the Romans.

Tony Crumbley has been a collector of stamps and postal history since childhood. He has authored numerous articles over his career as a philatelist. He is the current Co-Editor of the North Carolina Postal History Journal, a job he has had for over 25 years. He is a General in the Civil War Philatelic Society where he served as president. He lives with his wife, Renea, in Charlotte, North Carolina, and is the retired Vice President of Research for the Charlotte Chamber of Commerce.
PrevPreviousScorching Post Cards on Hawai’i
NextKnow-It-All Quiz WinnersNext
9 Comments
Oldest
Newest Most Voted
Inline Feedbacks
View all comments
GeorgeSlaton

Tony, this is a very interesting article! I didn’t know about the ropes for women and had never though about how so few of them could swim! Those were different days….

I would think the weight and looseness of the suit, may inhibit ones ability to swim or wade also.

Have three printed arcade cards featuring two piece swimsuit women. Two sport polka dot plunge attire, one, with outreached arms, holding a matching towel. Without the visual of color it is unknown if yellow is represented. With this superb story, my imagination tells me this is so.

My examples note nothing more than Made in USA and Printed in USA. Backsides are barren, except for penciled price ($1. each) as mall booth number.

Absolutely loved this discussion. The 19th centrury ones feel so quaint!

Wonderful insight into the history of female bathing attire and bathing postcards. Thank you for the information.

Interesting article. When one of the maids who regularly clean my apartment briefly took off her mask a few weeks ago and allowed me to see her mouth for the first time, I had a sense of how a man of a century ago might have felt when he first gazed upon a woman’s ankle or knee!

And of the 1920 ,likes the ones in this article