The Troubled Life of Louis Wain

The world became a happier place the day the first postcard appeared with a picture of a cat. Among the artists whose work appears on cards are some of the world’s finest artists and illustrators, men and women like Arthur Thiele, George Shepheard, Helen Maguire, Carl Reichert, Eugen Hartung (the artist of the Mainzer cat cards, and the most loved of all Louis Wain.

Known worldwide for his animal art, Louis Wain is among the most widely 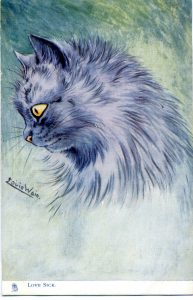 collected of the artists whose work appears on postcards. It goes without remark that cats were his favorite topic, and he has drawn them in nearly every circumstance imaginable.

Raphael Tuck & Sons was Wain’s publisher of choice. Because of its age, the accuracy of the Tuck Database is now coming under some scrutiny, but as recently as 2014 the number of Tuck cards attributed to Louis Wain was 472 designs.

Wain’s Cats Series #1412 is by far my favorite set. It is a six-card set created from watercolors Wain did prior to 1903. There are variations, in the form of overprints on each card for occasions like Christmas, New Year, and birthdays. As for this particular set – it was printed in England by Tuck & Sons but sold throughout the UK, the United States and Canada. 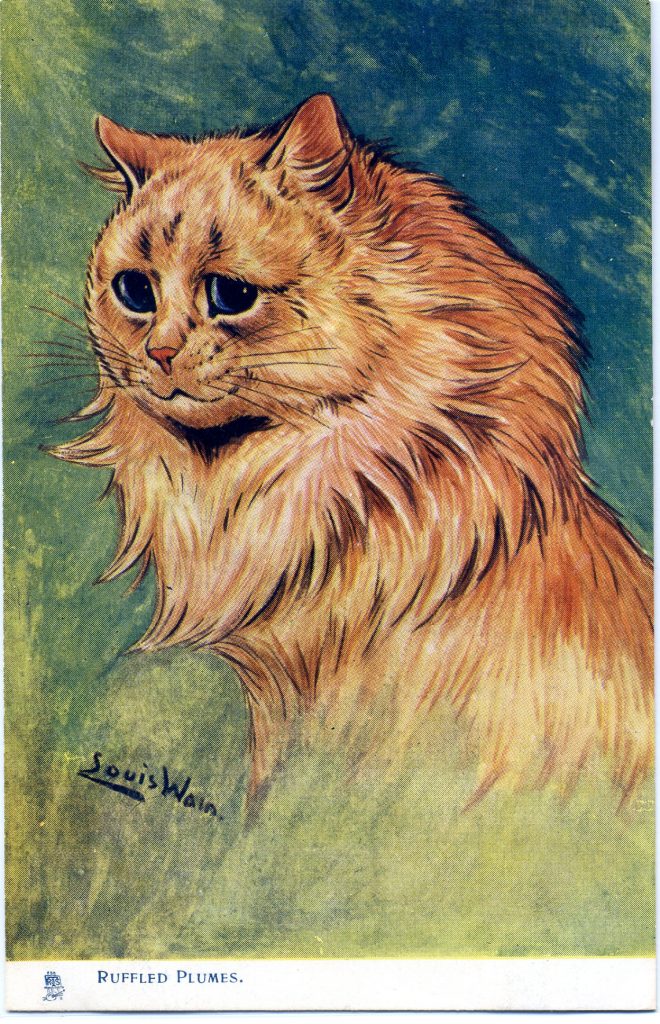 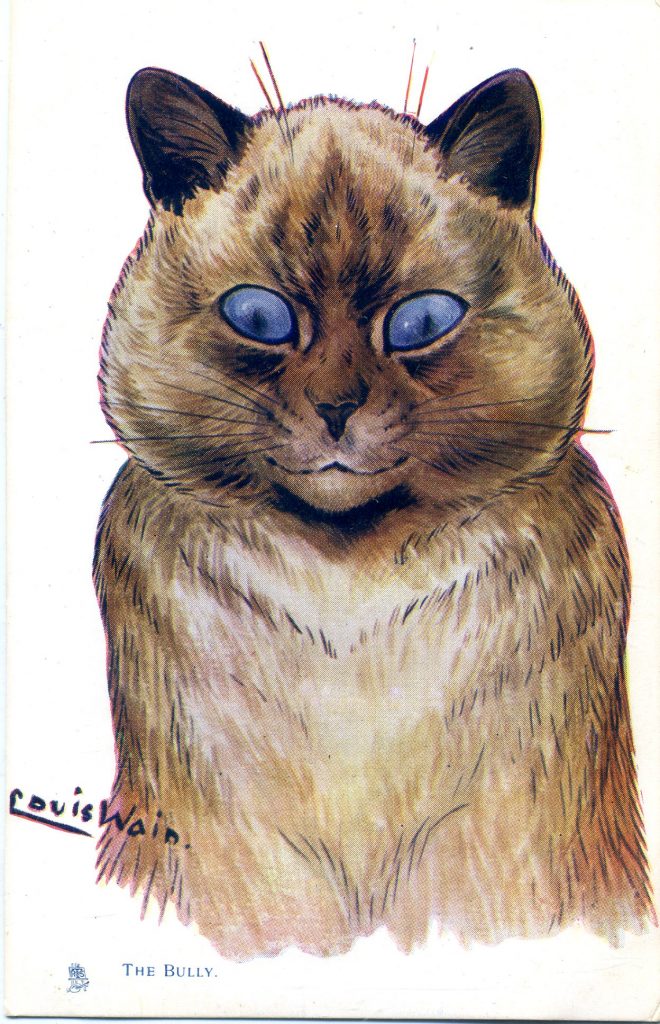 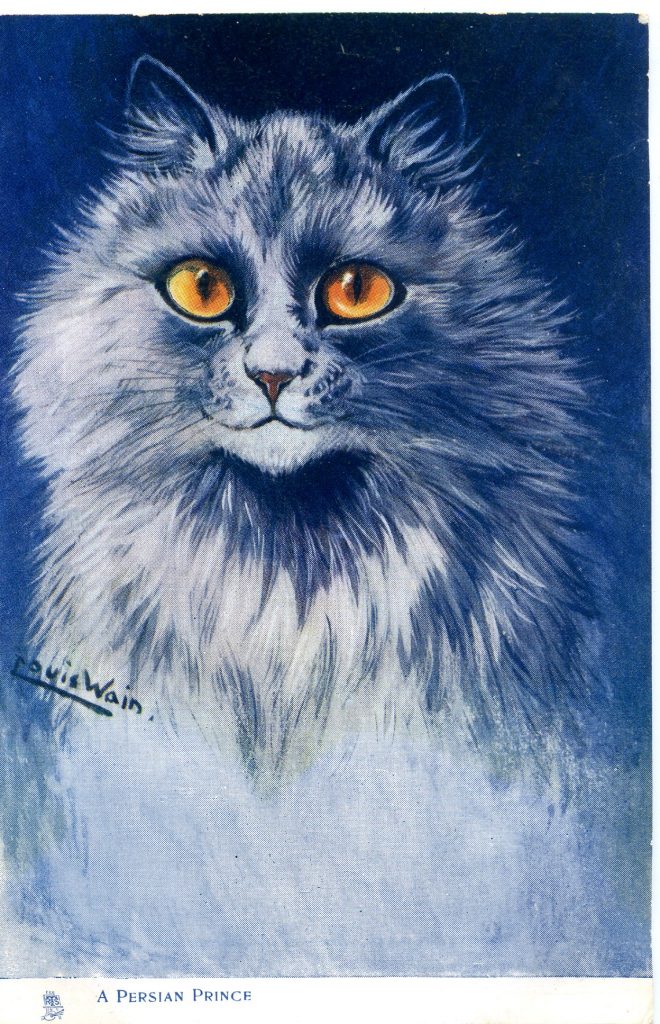 Throughout the years when Tuck published Wain’s art on cards, their business reached new heights. Among the sets produced were Wain’s At the Cat Show, Series I and II; Cats and Dogs as Louis Wain Sees Them; chats comiques (for the French market and distributed in France, Algeria, and Tunisia); and Cats at Chr 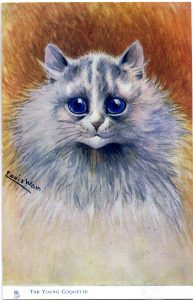 Among the most popular of the Tuck/Wain series were The Louis Wain Fairy Tales Set and The Louis Wain Nursery Rhyme Set. In both these sets cats stepped into the roles of the principal character. Imagine for yourself, Cinderella cat, Little Red Riding Hood cat, Sleeping Beauty cat, Sindbad the Sailor cat, Robinson Crusoe cat, Ali Baba cat and his Forty Thieves cats.

Also popular were the cards in the six Mascot Sets. For most of his life Wain was comfortable with his fate. Life had dealt him some harsh blows, but his career as an artist and teacher had provided an adequate income and he wanted for little. He therefore spared no effort when it came to honoring those who sought life’s joys in other ways. His Mascot cards paid tribute to more than thirty occupations. (See the featured card – The Writer’s Mascot.)

Suspicions were dashed by Louis Wain’s all black cats set entitled, Lucky Cats. The arts were modified with Wain’s Mikado cats in full Asian dress. Wain even made communications easier with his many “Write Away” series. 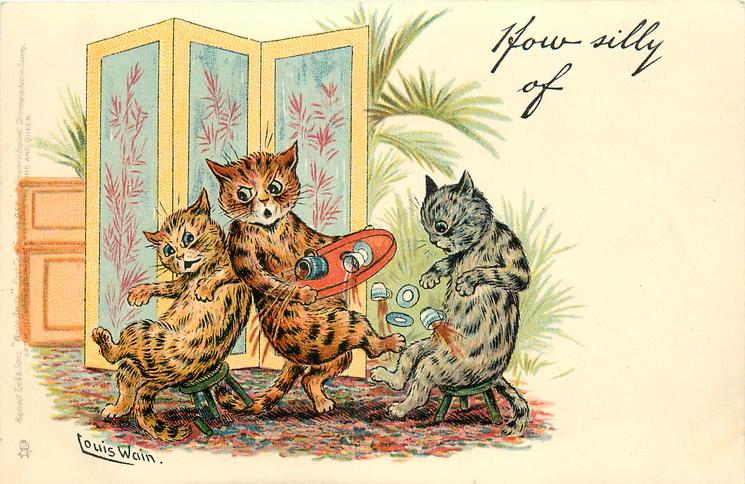 Example of a Wain “Write away postcard,” How silly of

Wain was born in August 1860, the son of an English textile trader and a French mother. Being born with a cleft lip, which in his adult years he covered with a fairly heavy mustache, his parents were reluctant to send him to school until well after his tenth birthday – consequently his formal education lacked the basics. He did however attend a London art school and soon after took up a teaching career at the same school.

He married Emily Richardson at age 23 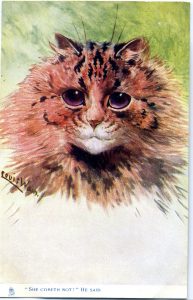 ; she was 33. Their marriage lasted only three years, as Emily died of cancer at age 36.

The first cat in Wain’s life was a rescue kitten named Peter. Peter was a constant and loyal companion for Emily as she suffered the pains of her illness. In one year, thought to be 1886, Louis did several hundred drawings of Peter. Late in life, Wain wrote of Peter, “To him, properly belongs the foundation of my career, the developments of my initial efforts and the establishing of my work.”

Life was a constant struggle for Wain and by 1924 he had a full-blown case of schizophrenia. After being committed to a mental hospital, just north of London, he spent his remaining years in a confined environment. His new hospital had a resident colony of cats and a special garden where Wain was able to continue the one aspect of his life that remained unchanged.

If you are interested, research Wain’s last works, the ones dubbed the “Kaleidoscopic Cats.” None of his last works (to the best of my knowledge) appear on postcards, but many of his kaleidoscopes have been examined closely by psychologists and art historians and both singularly and collectively have long-since been referred to as the Mona Lisa of asylum art.

Interestingly, Wain’s confinement continued even after death. His family had him interred in his father’s grave at a Catholic cemetery in London.

Most (at least 90%) of Wain’s cards are signed.  His signature is very simplistic and easily recognized. 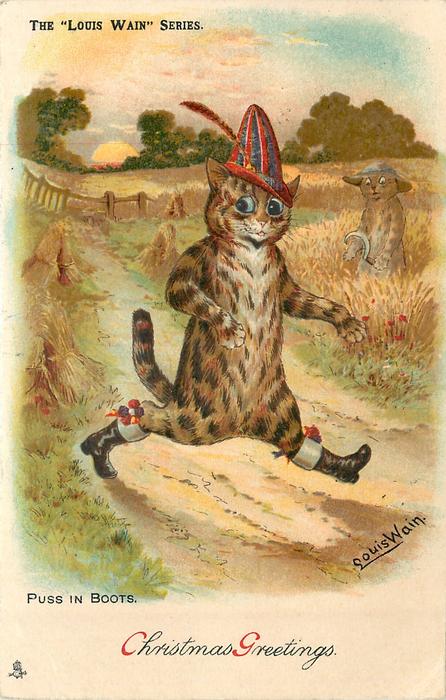 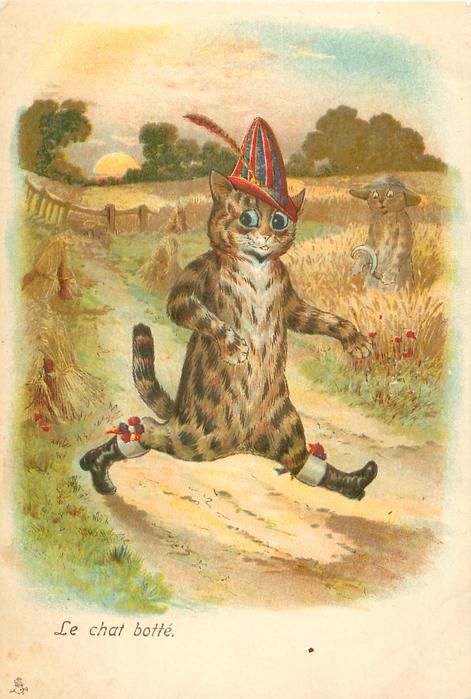 Ellie McCrackin is a pen-name used by one of America's foremost archivists. Preferring to remain in the background, Ellie ghost writes for some of the leading world historians. She loves postcards and loves to write about the stories they tell.
PrevPreviousTragedy Befalls the Innocent in Ohio
NextCoastal Sentinels: United States LighthousesNext
4 Comments
Oldest
Newest Most Voted
Inline Feedbacks
View all comments
Gail

Thank you for this piece honoring an incredibly talented man. I love every one of my LouisWain postcards. The expressions on the cats’ faces, the sense of movement in their poses, and the never ending theatrics are priceless to cat lovers.

I would like to place this article in our postcard newsletter here in Perth, Western Australia.
With your permission.

I have visited Louis Wain’s grave in London. Sadly the headstone is now leaning over (possible subsidence?) I have been told that the only people who could rectify this have to be relatives of Louis Wain himself . If there are any relatives then it is up to them to reposition the stone.