When I surrendered my boarding pass to the Heathrow gate clerk on New Year’s Day for my flight to Miami, Florida, I intended to complete three tasks in the next thirty days: cross the Atlantic, learn to drive on the right and get myself to California. Planning this trip took two years. As I got close to my retirement date, I made reservations and took copious notes in a spiral-bound trip notebook that exceeded sixty pages. I included dates, locations, hotel names with addresses, phone numbers, GPS settings, and confirmation numbers. I planned each driving day to be approximately 150 miles of travel that I could complete before one o’clock and another 150 miles that I would hopefully achieve before sunset.

My readers should remember that I lived in the UK for just over three decades, so the bit above about achieving a destination before sunset is important. Since driving on the right-side of the road is the norm in America, I thought it best to perfect that skill in sunshine.

The easiest of my goals was to cross the ocean, westbound to Miami. With 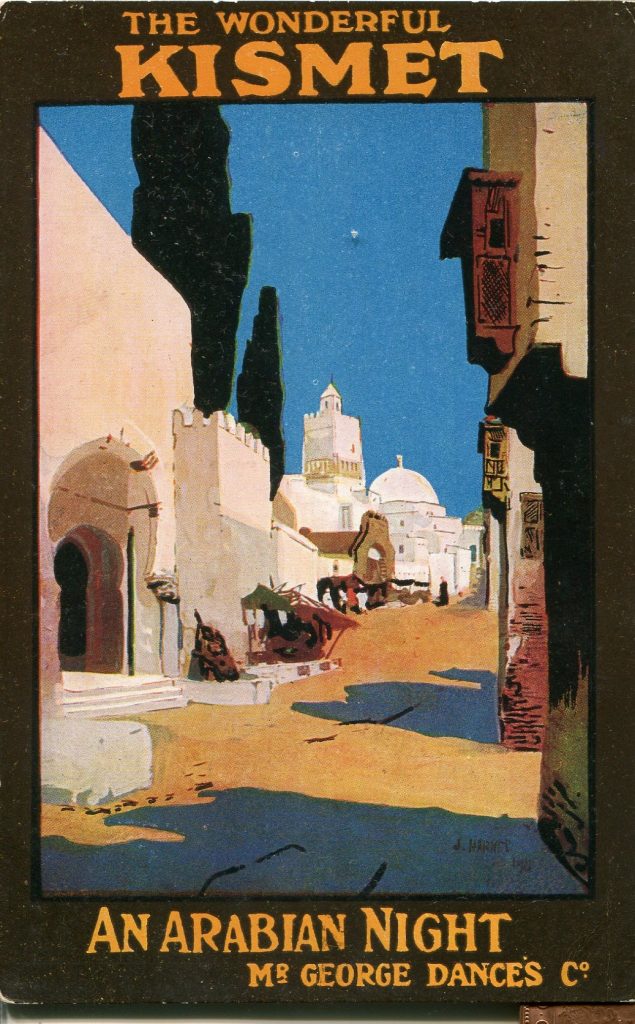 that managed, I planned to use my “miles” to rent a car and drive it to California; my itinerary included eleven major stops and to arrive in Burbank, California in early February. Everything stayed on the rails until my arrival in a little town just a few miles north of Redding, California. Mount Shasta!

But wait, I’m much too far ahead of my story.

Let’s return to Rutland, Vermont, autumn 1961. At that time, I had lived in America for three short years, but had changed my British accent to a New England “Yankee-Eh” twang. If you don’t understand why this is funny, it’s okay. I joined the cast of the school play in my senior year in high school and the production was to be, although we students didn’t know it, a watered-down version of Kismet.

You should know, 1961 was the 50th anniversary year of that famous musical. I won the part of Lalume, the chief wife in Wazir’s harem. Lalume’s character-tags were: wife, beauty, sexy, seductive, bored, lustful, flirtatious, voluptuous, attractive, and widow; I was none of these. The actress who played that role in the original production at the Garrick Theatre (London) was Ann Little at the ripe-old age of 20. Dolores Gray did a splendid rendition in the movie of the same name 44 years later. 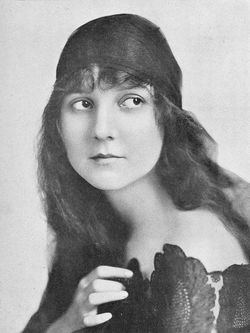 The four days I spent in Burbank, California, from where I wrote to you on Day #34, were quite exciting. I visited some very special places. The Los Angeles National Cemetery on Sepulveda Boulevard took a whole day; I had no idea there are over 75 thousand graves there. But most of my time was spent in Glendale at the Forest Lawn Memorial Cemetery. One of the gravesites on my list was Ann Little’s.

After Burbank, I wandered up the Coast Highway through Solvang and San Luis Obispo to San Simeon. The Hearst Castle is incomparable, it is a good enough reason to visit California even if you don’t go anywhere else. I could have sat by that pool for weeks.

I walked around San Francisco for six days. Got to see the bridge (The Golden Gate) and the wharf (Fisherman’s). The food was wonderful, but expensive. Have you ever noticed how well you sleep when you spend ten hours each day walking? Two visits to famous libraries left me exhausted (the San Francisco Public and the Prelinger; the hours at the Prelinger are a little wonky but it’s collection is superb). On the other hand, an afternoon at the Walt Disney Family Museum literally rejuvenated my enthusiasm for ticking off destinations.

And, today on Day #60 of my journey, I am in Mount Shasta City. Ann Little’s birthplace. This is where my “personal” train wreck happened. I ran-into Covid-19. Not me, thank heaven, but everyone else, so it seems. 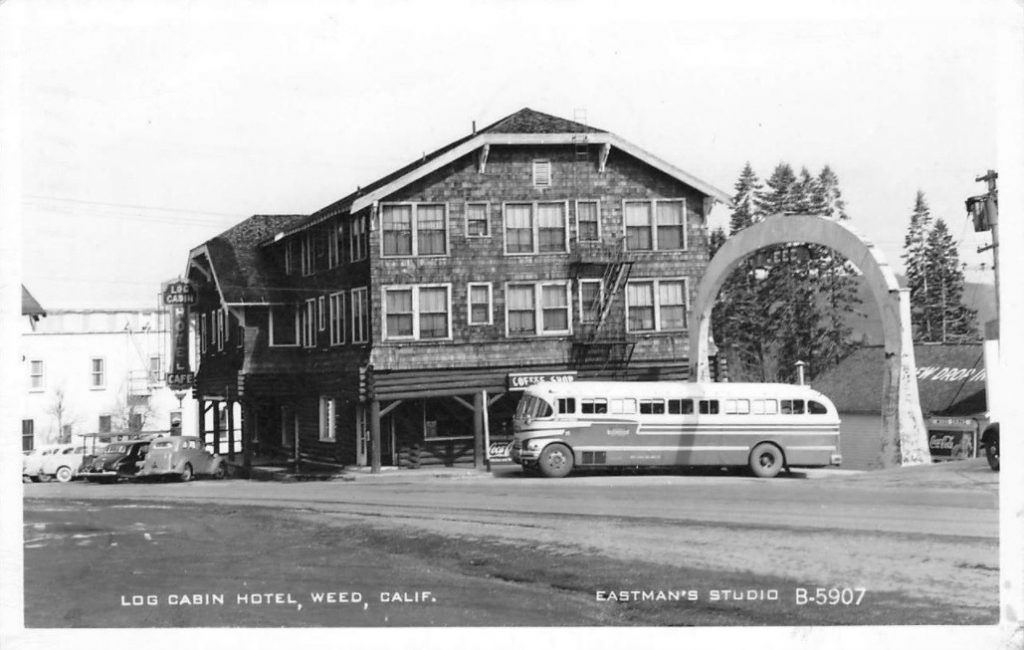 The Log Cabin Hotel was once Weed, California’s most notable landmark

My hotel is in a town called Weed, California. Weed is about 50 miles from Oregon. This is the place where George and Lennie got in trouble and were trying to get away from in John Steinbeck’s Of Mice and Men. (The town is named after the lumberman Angus Weed, and in no way reflects the nature of their agri-business.) Please, dear residents, don’t accuse me of making fun of your hometown. How could I? I lived for years not too far from a place called Bishop Spit and another called Greedy Gut. It is truly lovely here in Weed. I have a great view of the mountain, the weather is nice, but it’s not the kind of town where I want to spend one-hundred dollars a night until the virus dies.

My plan was to turn right when I arrived at Interstate 90 in Seattle, but they won’t let me drive into Oregon. Now what? The “what” I need to deal with is a 990 mile diversion (you Americans call them “detours”). This means I will miss all of Oregon and most of Washington, and lose almost as many dollars, to reach a spot I had no notion of seeing until the Spring thaw.

The expectation was to leave here tomorrow – the first day of a new month – my third month of retirement – and rip up the itinerary and head for Alberta, until what happened after breakfast this morning.

I took a different route back to the hotel and passed an old-timey Art Deco theatre. There was a window card that caught my eye, it read: CLASSIC 1937 MOVIE SHOWING TONIGHT 8 PM – DESIGNING WOMAN.

My brain took a nose-dive. I must change plans. I stopped and bought an advanced ticket ($8).

I have never seen Designing Woman, not even on the telly, but I know it was Dolores Gray’s last movie. Along with Gregory Peck and Lauren Bacall, Miss Gray acts the part of Lori Shannon. Now, Lori Shannon is a role whose character traits are sexy, seductive, flirtatious, voluptuous, and attractive!

Hey, “If you can’t be all these; at least watch them every chance you get.” 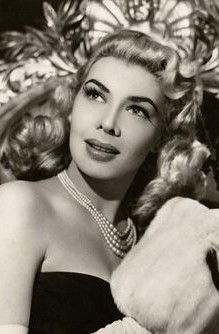 Kaya Fellcheck is an optometrist by trade and has practiced her profession in England’s Lake District for nearly four decades. Soon to be retired, Kaya intends to come to America to visit the graves of Hollywood movie celebrities whose photos she has collected.
PrevPreviousThe Lipman Postal Card
NextGeronimo: Warrior to ShowmanNext
2 Comments
Oldest
Newest Most Voted
Inline Feedbacks
View all comments
Sharon Wolf

An engaging memoir of your 2020 road trip. Looking forward to the next episode.

Since you are no longer working and thus were free to take your road trip, Kaya, you should have the writer credit description of “soon to be retired” and intending to come to America changed!

An engaging memoir of your 2020 road trip. Looking forward to the next episode.

Since you are no longer working and thus were free to take your road trip, Kaya, you should have the writer credit description of “soon to be retired” and intending to come to America changed!