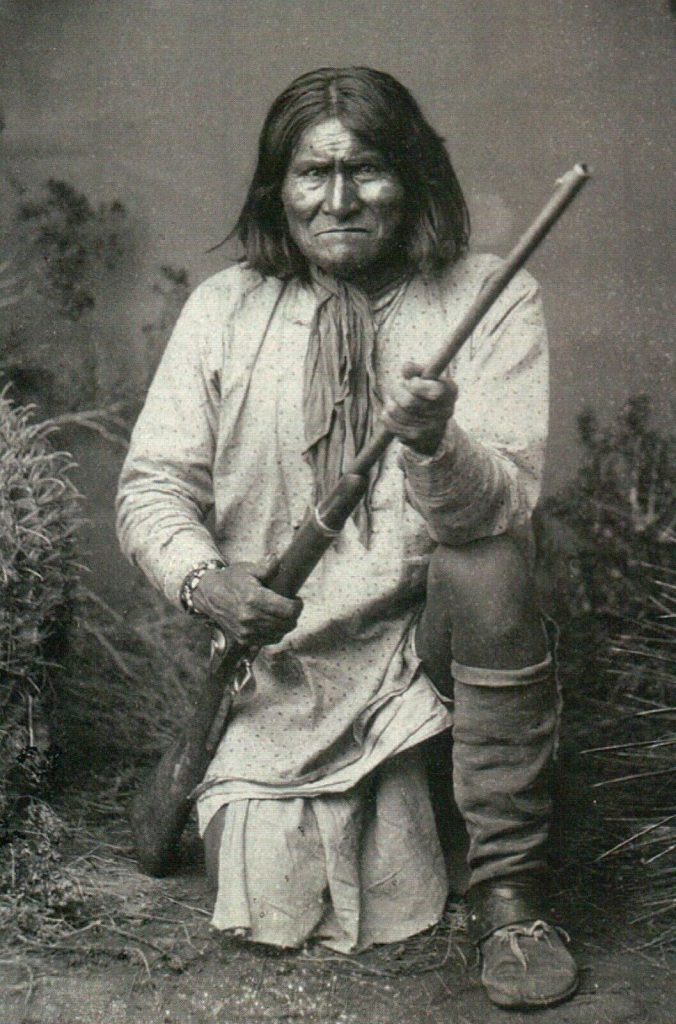 Geronimo: The warrior leader about 1883

The Apache-United States conflict was a direct outgrowth of the Mexican-Apache wars that were ongoing since the arrival of the Spanish colonists in the 1600s. Beginning as the United States war with Mexico ended in 1848 and settlers began arriving in the Apache’s homeland, there were raids and guerilla warfare against the Mexicans and other Indian nations that were a way of life for the nomadic Apache. The conflict was often brutal and fed on a cycle of revenge and retaliation and continued even after Geronimo’s ultimate surrender in 1886.

Geronimo, given name Goyathlay, “one who yawns” was born into the Bedonkohe band of the Apache Nation along the Gila River of Arizona in 1829. The date and use of the name Geronimo is unclear and was probably used to simplify his name.

Never a chief, but a born leader, Geronimo commanded raiding parties along the southern borders of territorial Arizona and New Mexico and into Mexico. He would strike suddenly and disappear into the mountainous desert terrain. In 1851 while Geronimo and his men were trading in a nearby town, a detachment of 400 Mexican soldiers overran their encampment and slaughtered most of those that remained. Geronimo’s wife Alope, his three children and mother were killed.

Geronimo’s hatred for the Mexicans caused attacks and counterattacks to continue for the next 25 years.

The Gadsden Purchase of 1854 placed the Apache homeland within the boundaries of the United States. [The Gadsden Treaty between the United States and Mexico resolved that the United States would purchase for the sum of $10 million, a tract of land along the Arizona and New Mexico border (approximately 30 thousand square miles). The logic behind this expenditure was to accommodate the construction of a far-southern railroad. A happy coincidence for Mexico was that it also solved dozens of border disputes.]

The increased military presence within the Gadsden ultimately led Geronimo and his band to surrender. In 1878, the Apache were sent to the San Carlos Arizona Indian Reservation that was run so badly it was called “Hells Forty Acres.” 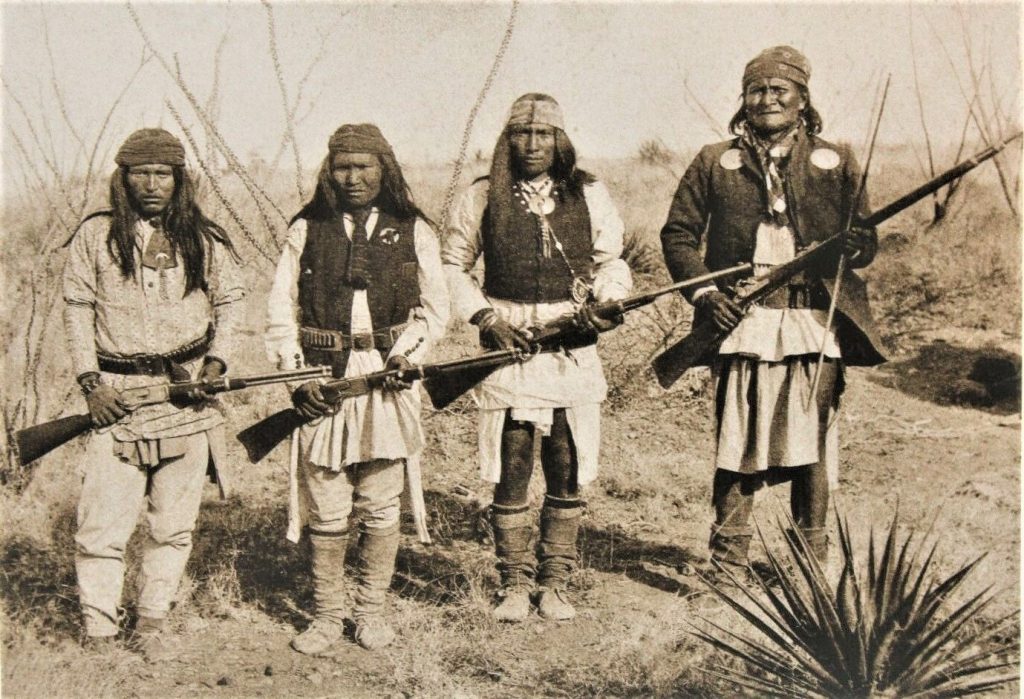 Geronimo with his brother-in-law, son, and second cousin

Unable to adjust to the static lifestyle on a reservation Geronimo and his band would breakout three different times over the next six years, escaping and disappearing into the arid mountains that were their home. As his band dwindled in number to less than 40 and chased by 5,000 US soldiers, he signed a truce of surrender for the last time in 1886, becoming the last Indian leader to surrender to the United States military.

Despite assurances that he and his people would spend just two years as prisoners, Geronimo would spend the last 23 years of his life under guard. 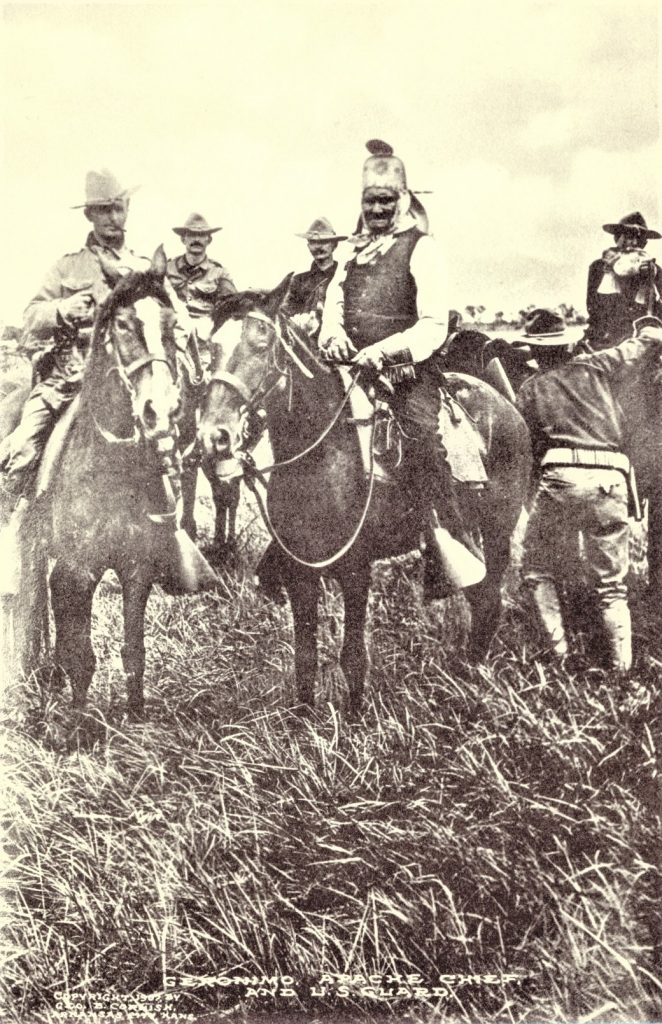 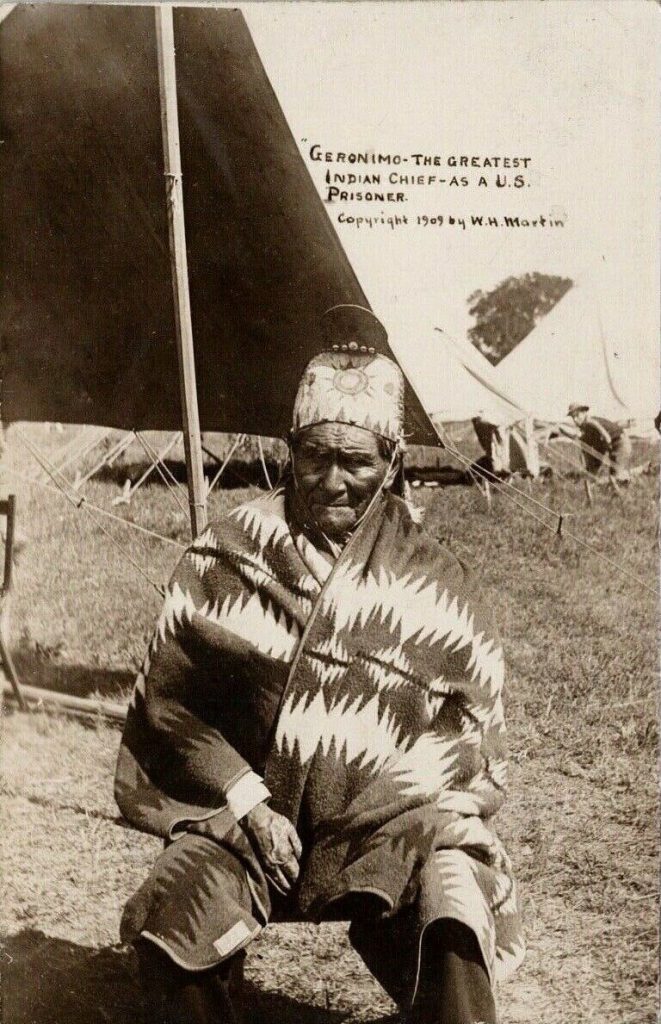 Geronimo … as a U. S. prisoner

First sent to Fort Sam Houston in Texas and then on to Florida his exploits and cunning soon made him an attraction and had him cashing in on his newly found celebrity.

In 1894 he was moved to Fort Sill, Oklahoma, where accounts state that on the train trip there he sold his autograph to the curious and for 25 cents the buttons off his coat. He would then sew new ones on between stops and repeat the process.

In 1898 he was part of an Apache delegation sent to the Trans Mississippi Exposition in Omaha, Nebraska, where 35 different tribes would showcase their way of life. The public wanted action though, and Geronimo was soon a star in Buffalo Bill’s Wild West Show. 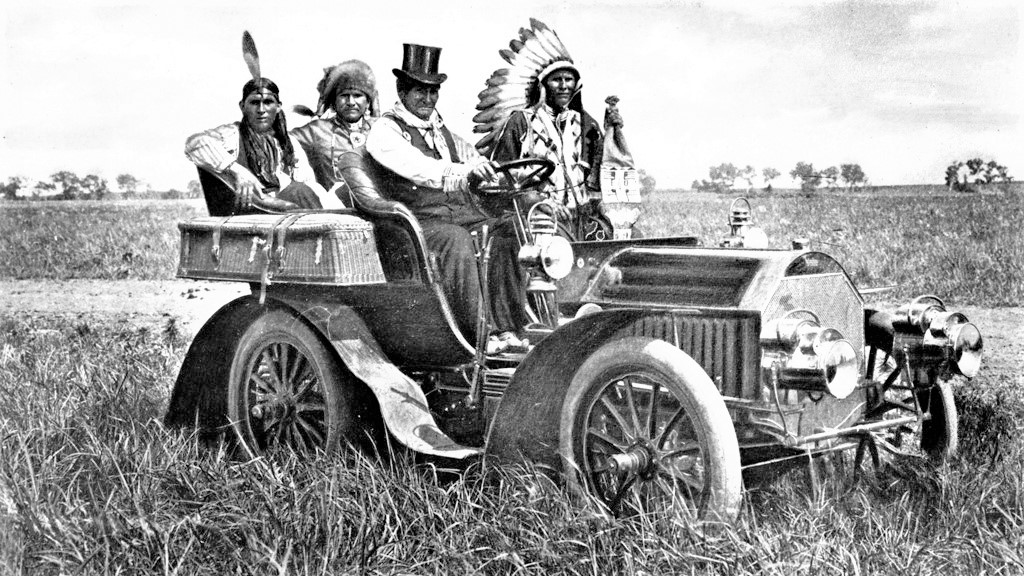 Geronimo driving the Locomobile used to chase the captive buffalo

Geronimo’s newly found fame would lead to invitations to every major event held in the United States over the next ten years. President Theodore Roosevelt invited him to march in his inauguration parade where he and others marched ahead of Indian school graduates, supposedly to show the difference between civilized and uncivilized Indians.

Not much is remembered about the graduates, but while speaking to President Roosevelt five days later he pleaded for a return to his home in Arizona, only later to be denied the privilege because of a fear that war would start again. He spent the time between appearances farming and became a shrewd businessman by selling everything from the clothes on his back to arrows and trinkets he had made and carried with him during his excursions.

In June 1905 he became the star performer at the initial 101 Ranch Show in Oklahoma, where he participated in the now infamously staged buffalo hunt. Brought to the celebration on horseback at the age of 76, he was seen by 65,000 people in the arena as the featured attraction. He drove the automobile used to chase a buffalo before the animal was shot and butchered in front of the delighted crowd. 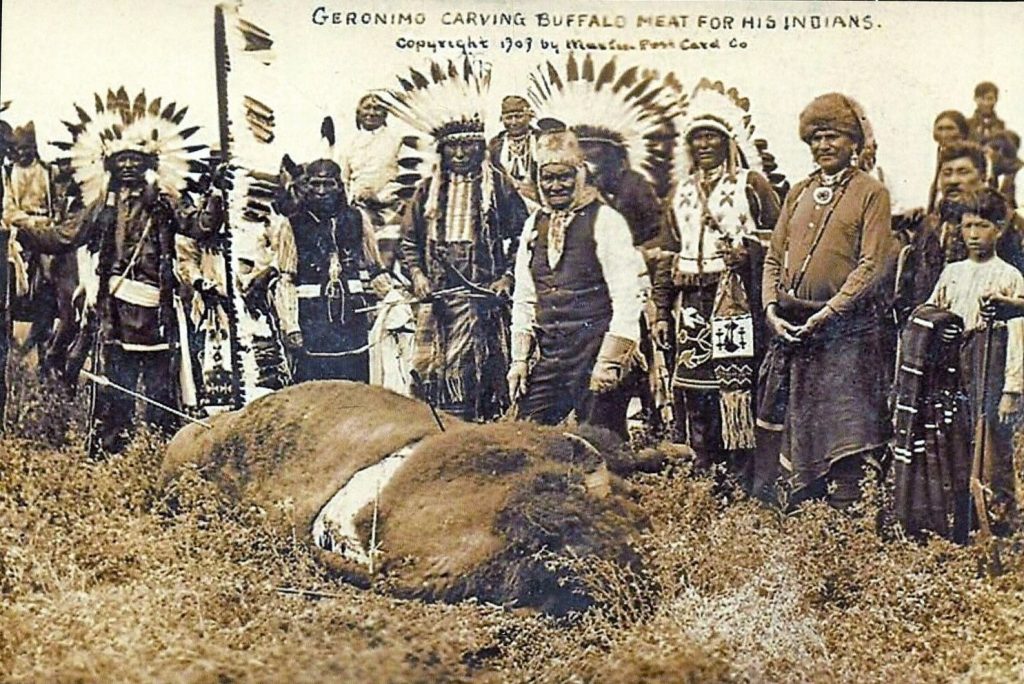 Geronimo carving buffalo after the hunt

Even at the height of their population the range of the buffalo never extended into Geronimo’s homeland in Arizona. By the time of the 101 Ranch Show there were less than 1,000 buffalo still alive. It is possible Geronimo had never seen a buffalo before the staged hunt.

Geronimo lived for another four years until February 1909 when he was found lying partially submerged in a stream after a fall from his horse during a night of heavy drinking. He died of pneumonia five days later. He is buried in the cemetery at Fort Sill.

In 1913 the Fort Sill Apache Tribe was granted permission to relocate to Arizona.

what a horrible tale of slaughter and betrayal. At least Geronimo got back some of his own.

Although there is a song titled “Geronimo’s Cadillac”, the caption underneath the photo of Geronimo driving correctly identifies the car as a Locomobile.

one of the many students in the global classroom was hitler. he and others learned some lessons well from the teachers, namely the US government/Army et al.

Hitler was actually an intelligent, yet brutal, man from the get go. He also had a micro penis (Button).

What this article fails to mention is that Geronimo was a medicine man (AKA: healer and spiritual leader). He went to a Christian church because his mother and wife wanted to, and was learning the ways. After he came home from hunting for food he found his mother, wife, and children brutally slaughtered; and wasn’t sure if it was the Mexicans or the ‘Americans’. Anyone would lose their mind. There is the white man’s stories and then there are the stories passed down to us by people who were there.