This story is for John. It’s about my postcard collection of inclined railroads and funicular railways. Compared to many of you who may have collections of thousands or maybe tens of thousands, my collection is quite small. I have just added card number 103 and 104. My plan is to collect one, yes – just one card of every inclined railroad and every funicular railway in the world. Currently (1979), I am at the half-way point. 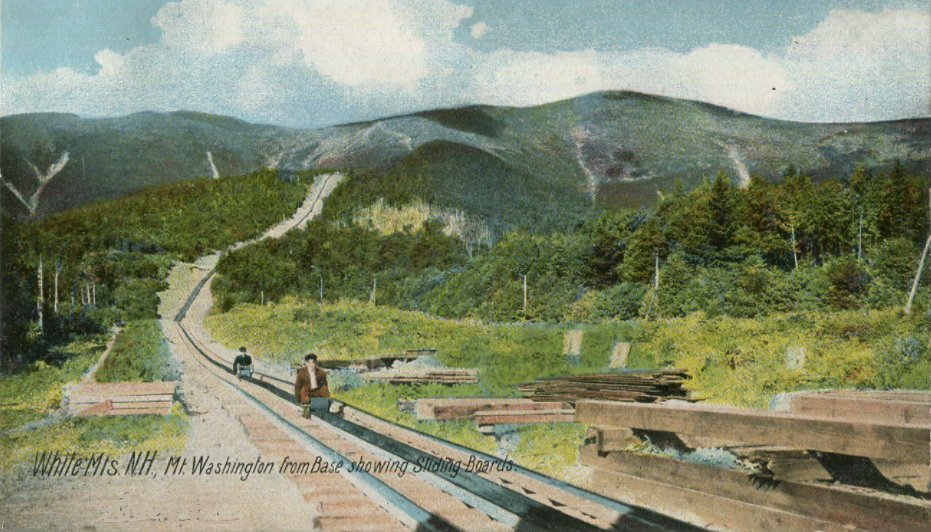 The first card I collected is one of Mount Washington, in New Hampshire, USA. I bought the card nearly 20 years ago at a postcard fair in London, Ontario. I was fascinated by the fact that this card featured a picture of someone just like me when I was beginning my working-life. You see, I was a gandy dancer.

Gandy dancer is almost a derogative word that refers to any [rail] “road-worker” in the US and Canada. My first pay was handed to me at quitting time on a Friday afternoon in July 1923. It came to me in what was called a coin-envelope. On the front it had my name, the number of hours work credited to me, and the amount of salary. Also, there was a space for job title; it had “SECTIONHAND” printed in that spot. I still remember the amount – $17.07. When I investigated my first job-title many years later I learned that it was a person who laid and maintained railroad tracks in the years before those jobs were done by machines.

We had lots of Chinese people and some Englishmen who came to Canada to work on the rails. The Brits called gandy dancers “navvies” – short for “navigators.” The navvies got their name because they were the workers who built the industrial canals throughout the British Isles. Later, around the 1960s, I think it was near retirement time, the term “plate layer” or “plate man” got in the mix but I was never called a “plate man.”

The truth is that my job was too much fun. I didn’t care what they called me. I made a bunch more money when I left BC [British Columbia, CANADA] and moved to Colorado. In America, the railroad companies had approved different tools. One was called “the dragon” and another was simply called “crack-finder.” Even after they gave me one, my job was still fun. Just in case the words don’t make sense, a “crack-finder” was an electronic gadget that beeped like a Geiger counter when it found an inconsistency in a piece of railroad track.

Every time I look at my collection I remember something different. I’m just like other people, the first is always your favorite, but I never worked at Mount Washington. Two of the places I worked are Chattanooga and Pikes Peak. 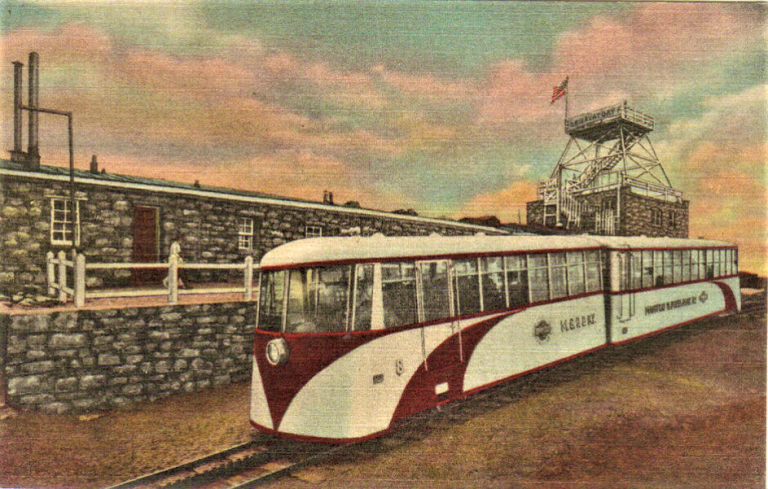 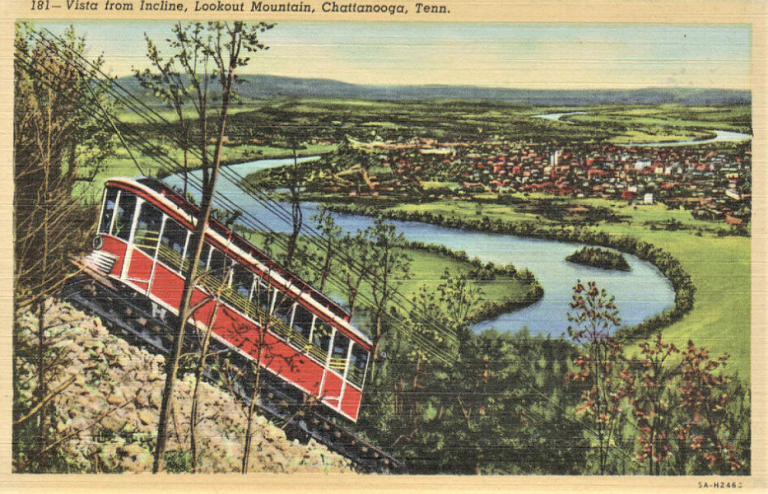 I’m not telling lots of facts; the facts are all written-down someplace else. I’m just going to show you a couple of the cards in my collection. And let you know that at some time or another I have worked on, inspected, or been a passenger on all five of the “roads” shown on these cards. 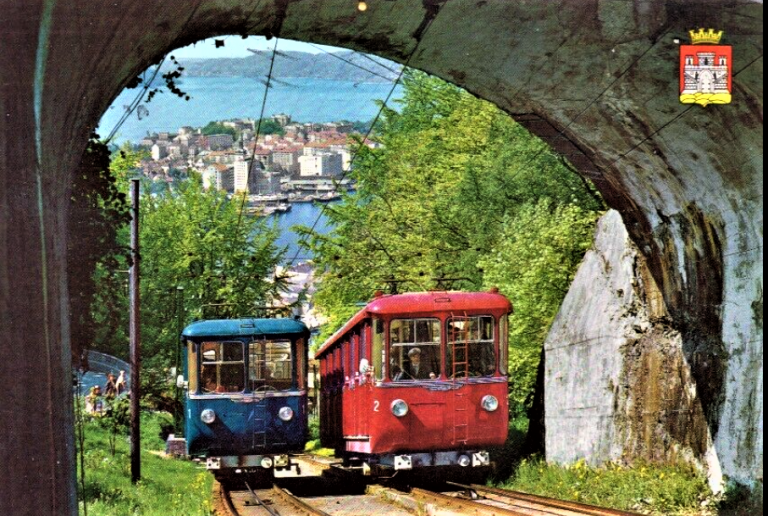 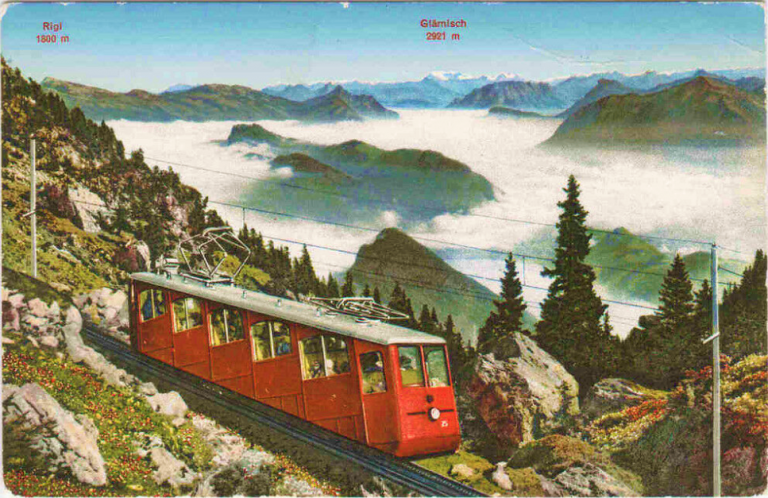 And one last card. It is my favorite of the cards that show inclines that are no longer working. 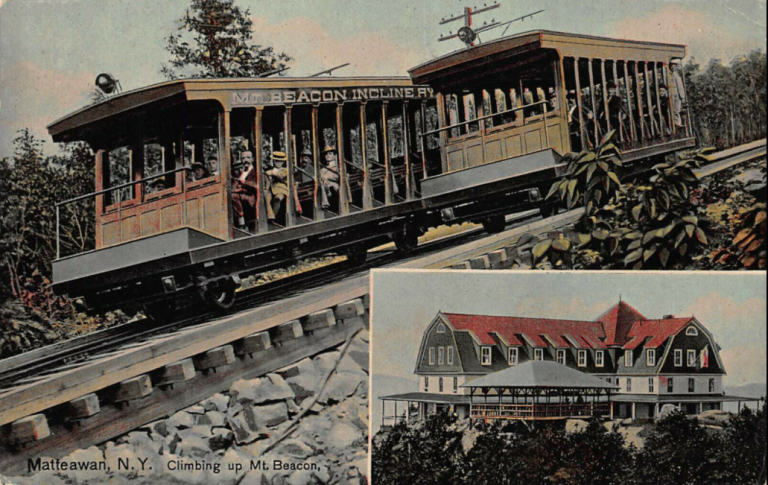 Aside: With this article was a note in John McClintock’s handwriting that reads: Lew Harrington is among the dozens of interesting people I met at postcard shows and have never seen again. Over a box of train postcards at a show in New Hampshire about three years ago, he and I decided that I should buy the Mt. Washington postcard above because he already had one. He had a rule that he would buy only one card of each railroad. He died at age 91 in 1978. His daughter suggested that he took his final inclined railway trip to heaven, where he will probably inspect every track he can find.

[Editor’s note: This article was found in a box labeled “President’s Archives.” Its first publication may have been circa 1979, but that is just a guess. The page is brittle, tattered, and so yellowed that it is difficult to read. I have managed to retype the text, but I have failed to find the exact same illustrations. (The substituted images are marked with an asterisk, “*”) With the facts in mind that Mr. Harrington told his story to his daughter, who in turn likely told John McClintock, who then transcribed it to his club newsletter (a copy of which has been in the above mentioned box for over 40 years), please forgive any inconsistencies you found. Thank you!]

Nice that this article survived long enough to be recorded for posterity in this magazine!

Love to see an article and pictures of cog railroads. I’ve ridden up Mt Washington on the cog railroad with my wife. She was scared and threatened to get off and walk back down if she didn’t like it. Eventually, she calmed down and actually enjoyed the trip up. I would love to take the Pike’s Peak ride someday…

I wish I could tell Mr. Harrington about my trip on the incline in Leysin, Switzerland where the upper level was next to our street level hotel and the lower level lead us to another street. We were there to visit my son who was in camp to learn French but instead, learned snowboardish.