and How the World Dressed In It 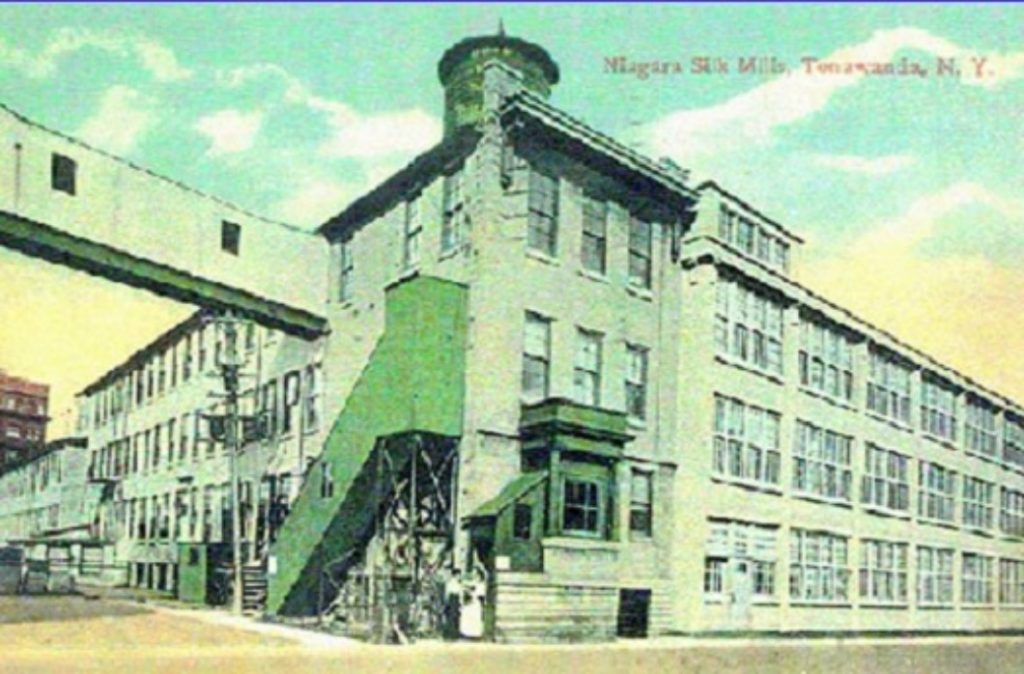 Since the discovery of silk, men and women have managed to wrap themselves in silk. From parachutes to socks everything that was once made with other textiles or fabrics has also been made with silk.

Writings that date back 5,000 years concerning the origins of silk are found in the words of Confucius. The story is that a silkworm’s cocoon fell into the teacup of a Chinese Princess. Her first instinct was to remove the offending object, but when she touched the pod a thread stuck to her finger and began to unroll. Instantly she noticed the long fibers and decided to weave some of it together. The emperor suggested that they encourage other members of the royal court to do similar weavings. Their experiments brought great joy to their empire and the princess soon became the goddess of silk. 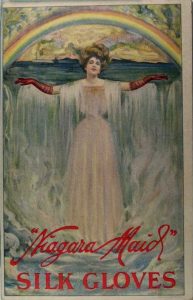 It was about 500 B.C. when the first of the silk roads opened between Sinea (modern China) through Scythia, to Persia, across Arabia, then to the Mare Internum (Mediterranean) then landing in Italia.

Centered and monopolized in Europe for the next ten centuries the silk trade became an integral part of the economics of western civilization until the middle of the 17th century. Like many other commodities silk traveled with the explorers. And the explorers came to the Americas.

Not the first in America, but among the best, the Niagara Silk Mills began operations at 84 Sweeney Street, Tonawanda, New York, in 1898 and produced textiles for twenty years. In 1918 the business became the Van Raalte Silk Mills, [pronounced: van rowl’ ta] known internationally for their silk stockings and silk gloves.

Van Raalte’s processed fabrics were used to manufacture handkerchiefs, hosiery, gloves, undergarments, and other items. At its peak, Van Raalte employed more than 250 workers and marketed their products around the world. In the early 1960s, after 65 years, the plant which faced the Erie Canal was closed because the facility was too small to accommodate modern knitting and dyeing machinery. Operations were moved to other Van Raalte mills in New York and New Jersey. 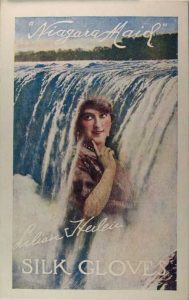 and Zealie Van Raalte went to work at Oppenheimer and Levy, importers of “veilings.” Within two years the brothers established the E. & Z. Van Raalte Company in New York City and continued to import veils from France and England, but they soon realized there was an opportunity to start manufacturing quality veils in America. By 1910 in Patterson, New Jersey, they established the first American veil-producing factory. Patterson had tremendous waterfalls and they were a great source for powering the factory. The business became so successful that by 1920 it was the largest silk-veiling and net factory in the world.

By 1922 the company branched out to manufacture and sell silk jersey cloth, gloves, underwear, and hosiery, they had 12 factories throughout New York, New Jersey, and Pennsylvania. These included Niagara Mills (Tonawanda, New York) which the Van Raalte Company purchased in 1918, the Clark Mills which they purchased in 1919, and the Pelgram & Meyer Mills in Boonton, New Jersey.

The company sold its products through all the upscale department stores of the day, and they became known for their high level of quality. By 1965 company sales topped $70 million. Their slogan was “Van Raalte: Because You Love Nice Things.”

The company prospered through the years and in the late 1930s was the first to produce stockings made with Dupont’s new “nylon” fiber. In 1970 Van Raalte was sold to the Cluett, Peabody Company (the Arrow shirt company) and then again in 1977 to the 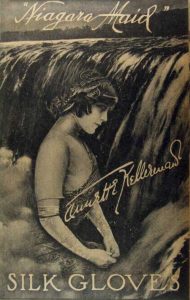 Kellwood Company. In 1994 Warnaco acquired the Van Raalte trademark for apparel, and the following year began selling Van Raalte bras exclusively through the Sears department stores. The products are still available under the Wear at Home trademark.

These postcards and others of similar designs were used circa 1910 – 1922 as advertisements for the silk gloves manufactured at the Niagara Mills. Throughout the years several well-known women participated in the ad campaigns and used the experience to further their own careers and to create several business opportunities. Two seen on these cards are Lilian Heilein and Annette Kellerman.

These women were not just ladies with pretty faces. They were highly respected professionals in the world of art, theatre, sport, and business.

A silkworm on a mulberry leaf is shown on the seal of the Georgia Colony (Savannah, GA). It was thought that silk production would be the backbone of the colonial economy. Silk certainly did travel with explorer.

Don’t remember seeing the Van Raalte name before — had I not been a postcard collector, I probably would have died not knowing this bit of history.