From the Stork Club
to Café Society

New York City was the undisputed leader of world-wide night life from the end of Prohibition into the 1960s and the start of the Rock Era. In countless nightclubs, theaters and cabarets throughout the City – but concentrating in destinations like Greenwich Village, Times Square, 52nd Street and Harlem – revelers could eat and drink to their hearts’ content, enjoy a show, a revue, a movie and dance the night away.

These were stirring times and neither economic dislocation nor wartime devastation could repress people’s creative urges and desires for expression. Their aspirations boomed and came into full flower during the economic surge that eventual peacetime brought.

Jazz and Swing were ascendant but any kind of music could be heard in New York’s nightclubs – Russian balalaikas, Bavarian Oompah bands, strolling Hungarian Gypsy violinists and more. You could be in Paris one night and in Rio or Havana the next. There was something for everyone’s taste in entertainment.

Within this cacophony, there could not have been two clubs as different as Café Society and the Stork Club. They were worlds apart socially and politically, but they were similar in a couple of respects. They were both led by hard-headed visionary entrepreneurs for whom nothing short of outstanding was good enough. And they both published numerous postcards of their interior decorations to entice customers, serve as a souvenir of a visit and to “brand” their establishments.

The Stork Club’s inner sanctum was the Cub Room, reserved for the “one-percenters” among the elite. Table 50 in the Cub Room was the redoubt of Walter Winchell, leading celebrity journalist, that is, gossip columnist of his age. Winchell could make or break careers with his newspaper or radio reports from the Stork Club.

Postcards published by the Stork Club reproduced the action and glamor of its private interiors. Here’s a sample.

The first card below features a depiction by Master Illustrator and Famous Artists’ School founder Albert Dorne of the Stork Club’s effusive frivolity on a typical evening. I can recognize Arthur Godfrey and Dorothy Kilgallen on the left side. Are there ay devotees of 1950s TV who can spot others? 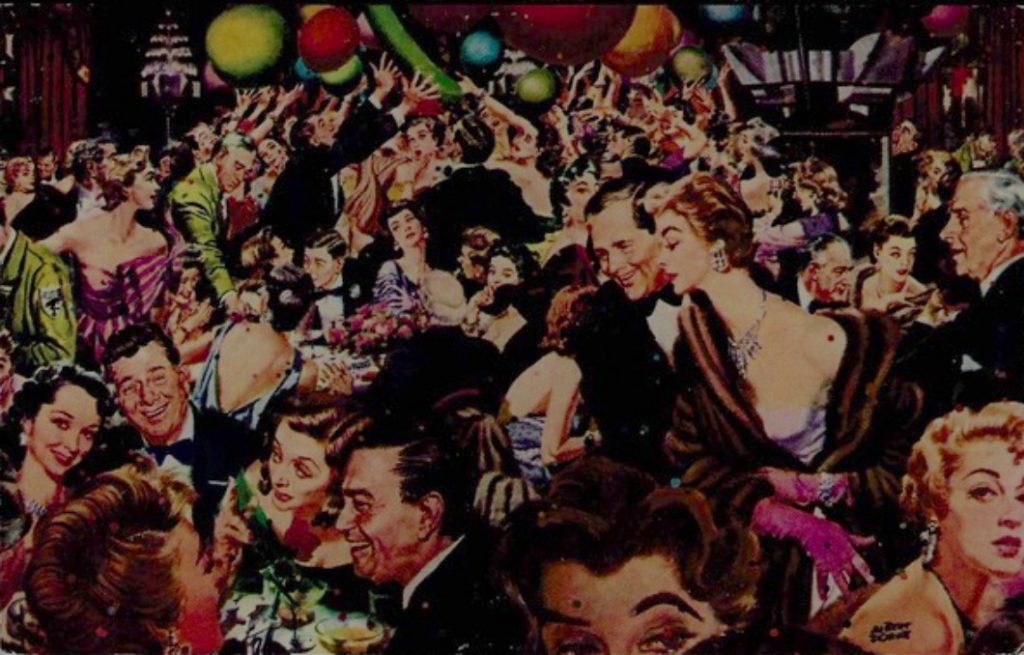 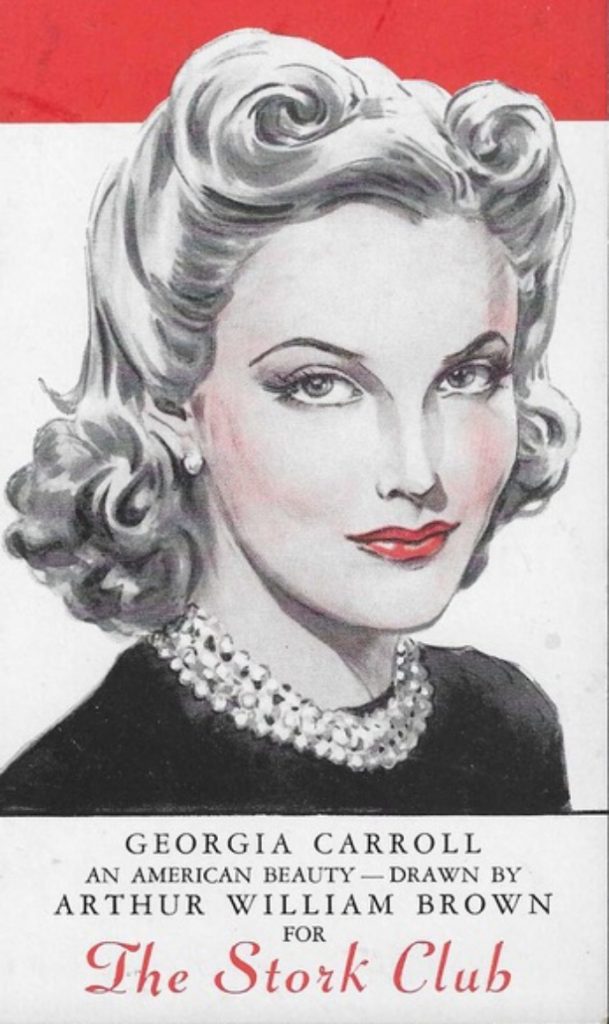 Arthur William Brown was known as the dean of American illustrators despite having been born in Canada. His work appeared regularly in the Saturday Evening Post and in book illustrations for authors like F. Scott Fitzgerald – when he wasn’t showing off the charms of Georgia Carroll at the Stork Club. 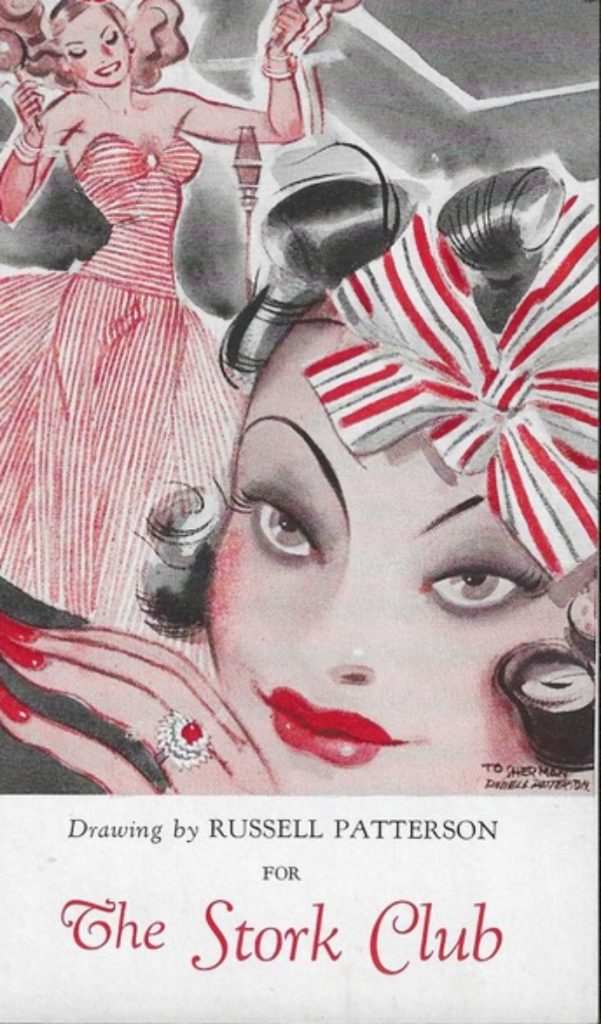 Russell Patterson’s creativity extended far beyond magazine illustration into cartooning, as well as set and costume design. However, he’s still best known as the creator of the iconic Art Deco sleek chic figure. His drawing for the Stork Club feels like it’s flavored “Peppermint Candy.” 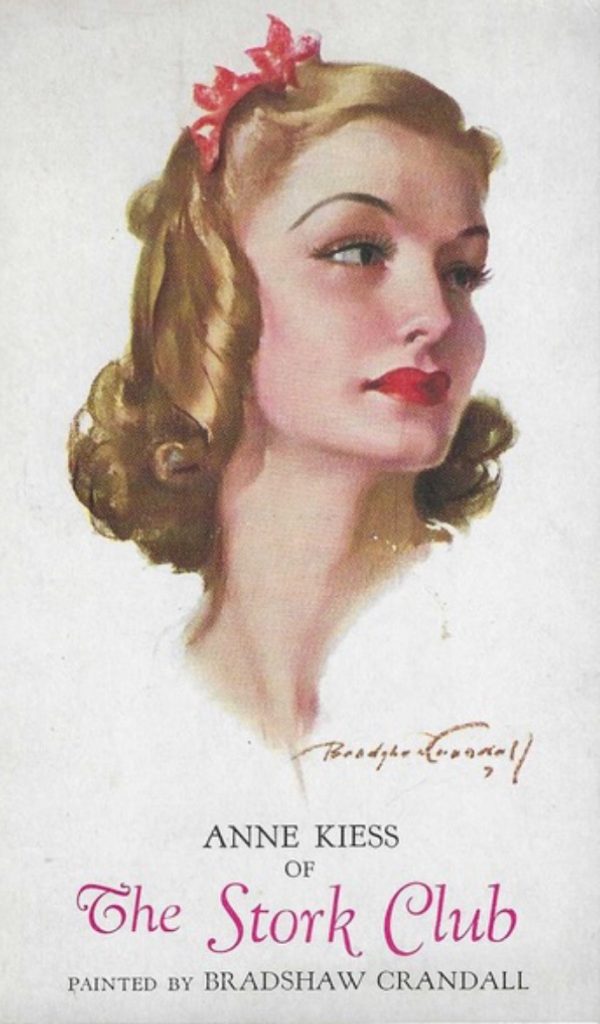 Bradshaw Crandell’s work was well known from his magazine covers for Collier’s, Saturday Evening Post and Cosmopolitan as well as the advertisements inside. He also earned renown as the “artist to the stars” for the glamorous portraits he completed for leading ladies like Carole Lombard, Bette Davis, Judy Garland, Veronica Lake and Lana Turner. 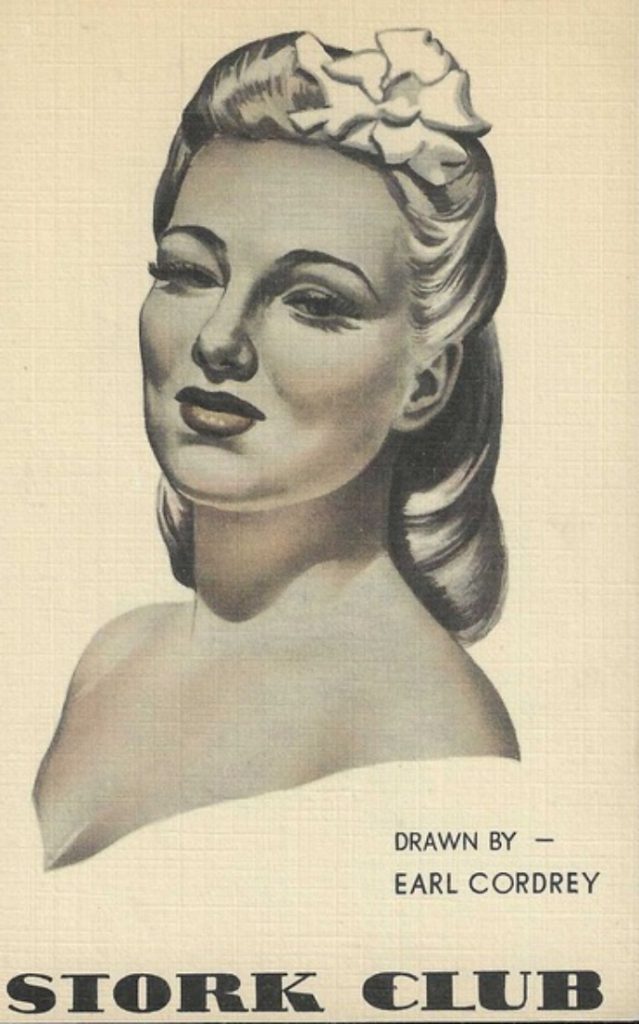 Watercolorist Earl Cordrey used hard-edged realism to illustrate magazine stories like “The Sergeant Isn’t Serious” (1944) and “Ring Twice for Laura” (1942) for Collier’s. After retirement, Cordrey returned to his native California and reserved his talents for drawing outdoor scenery.

In its closing years, the Stork Club’s posh entryway was relentlessly picketed by protesters who accused Sherman Billingsley of “union busting.” His racial insensitivity after picking fights with Lena Horne and Josephine Baker also cost him customers. Walter Winchell lost his reputation as a trend spotter after signing up too vociferously with Sen. Joe McCarthy’s anti-communist crusade. His staccato voice is heard nowadays only on late-night reruns of “The Untouchables.” 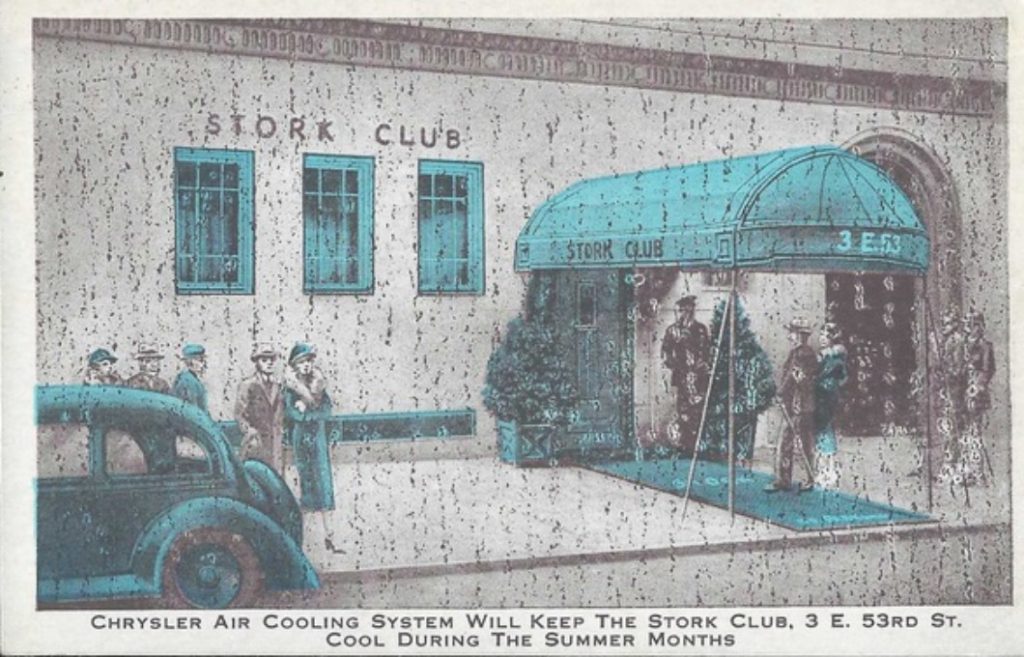 The Stork Club closed in 1965. Billingsley died a year later. Having sold the building to CBS, it was torn down and turned into a small “vest-pocket” park named for the network’s boss Bill Paley. 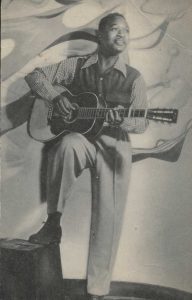 music venue before. The founder’s vision was to create the anti-Stork Club, a place without snobbery and devoted to racial healing and integration. As such, his club became a showcase for many notable African-American performers during the tense but hopeful war years and their aftermath.

The formula worked. Josephson even opened a second location uptown on 58th Street.  Cleverly, he got several A-list illustrators residing in the neighborhood to do murals for the club, paying them each $125 per artwork plus credit for an equal amount in food and drink at the club. He later reproduced those artworks as postcards, a few of which are shown here. 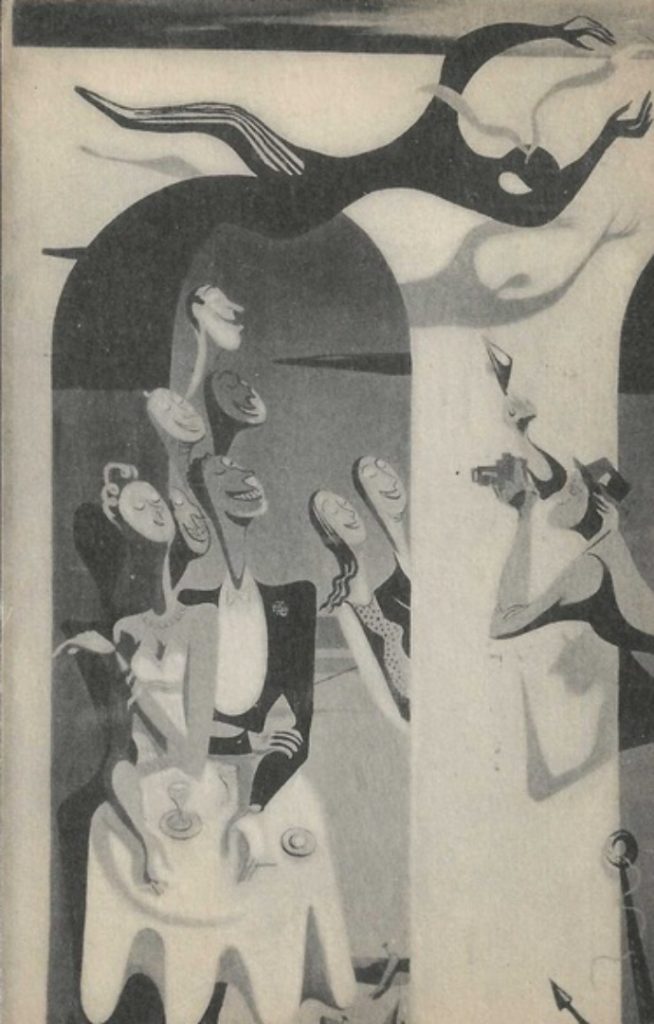 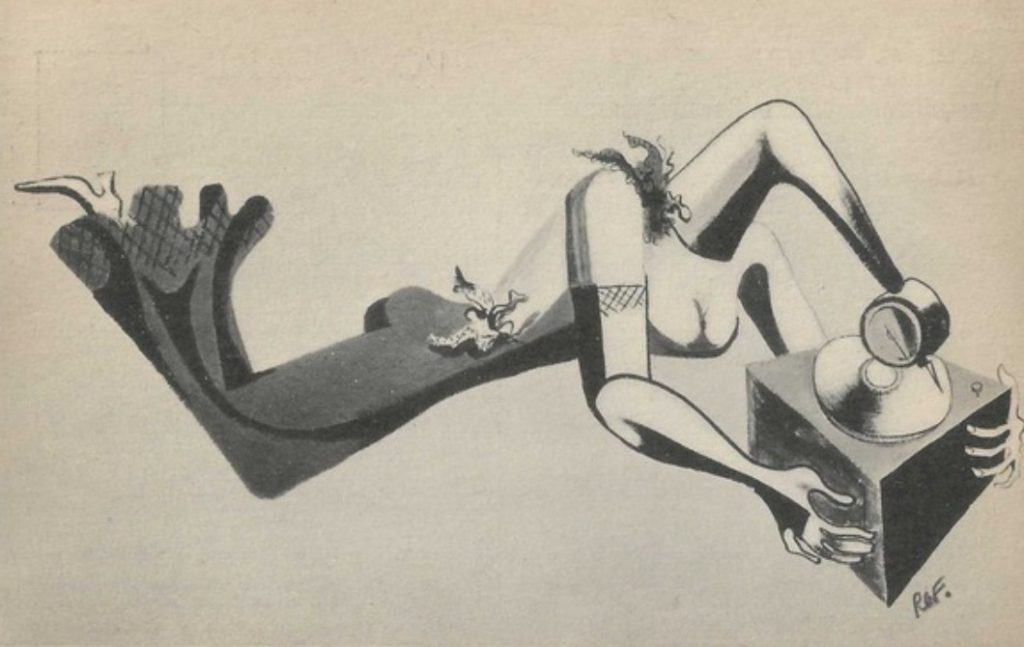 Syd Hoff was a prolific cartoonist and children’s book author. For starters, between 1931 and 1975, he contributed 571 items to the New Yorker. He also was the creator of the Danny and the Dinosaur franchise. Using the pseudonym J. Redfield, he also contributed cartoons to leftist publications like The Daily Worker and The New Masses. Hoff’s Café Society mural shows his iconic mustachioed character doing a fan dance before an insouciant café audience. 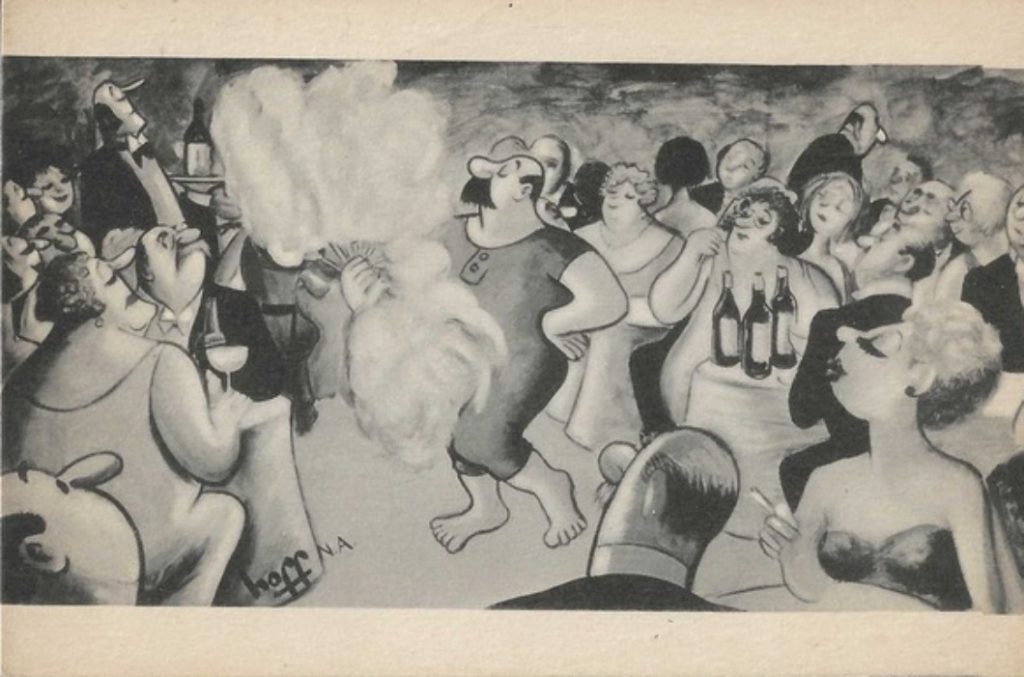 Ad Reinhardt was primarily a fixture among the Abstract Expressionist School of painters, known especially for his “Black” series. He also devoted considerable creativity to his work as a cartoonist and illustrator where he imagined all kinds of creatures like the ones in his Café Society mural. Ad Reinhardt’s final resting place is in East Hampton, New York’s Green River Cemetery where he shares space with other Abstract Expressionists including Jackson Pollack and Lee Krasner. 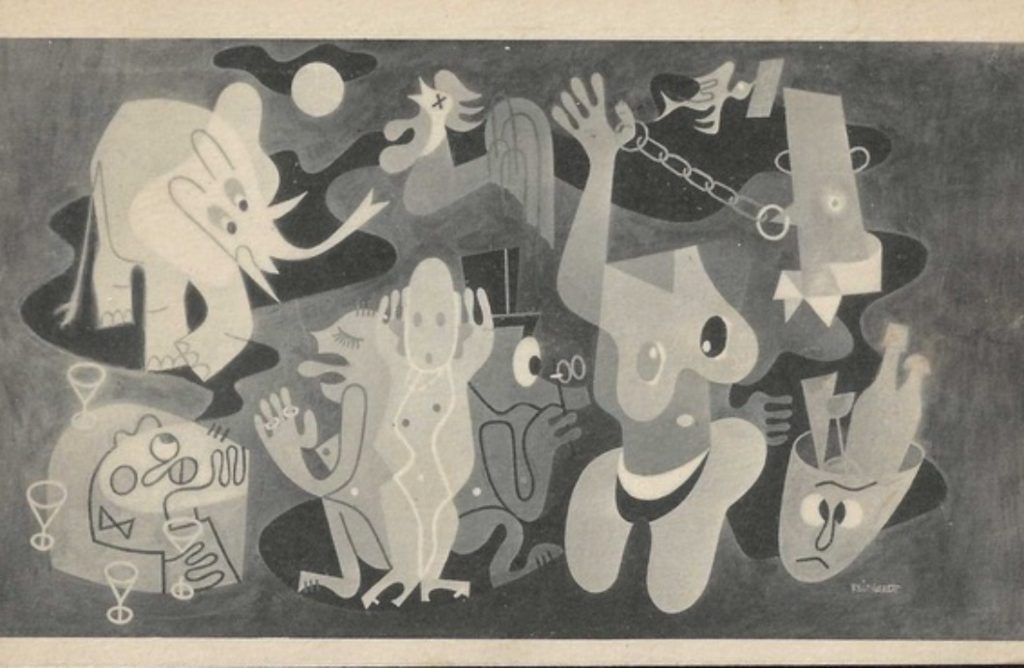 Café Society’s left-leaning sympathies eventually got them in trouble with McCarthy sympathizers. They were harshly criticized by journalists like Walter Winchell and stumbled to a close between 1948 and 1951. Josephson had the last laugh though, founding the restaurant/cabaret The Cookery that lasted into the ‘80s and featured the great Blues singer Alberta Hunter as a regular performer.

My husband and I had several meals in a modern restaurant also called “Cafe Society” . This one is located near Loma Linda School of Dentistry but probably serves hospital workers and students, and has hispanic items on the menu along with others. This is located in San Bernardino, CA Tried to send photo, but it wasn’t a postcard.

I recognized the name Syd Hoff from books I read as a child.

What strikes me is the artistry of postcards. Not simple photos, but beautiful works of art.

I loved reading about this piece of NYC history!

WOW, I am blown away by the variety and just Top Notch art postcards at these clubs and to know that they exist on postcards too…what a PLUS for all of us. This is an incredible article and it just goes on and on and Thanks so very much Hy Mariampolski. My friend Susan Lane speaks highly of you and I CAN SEE WHY. This is just marvelous. I love it and plan to read it several times more. Thanks for sharing here. Hope to meet you someday. All good wishes.

A wonderfully-drawn look at a very vibrant side of New York life over three decades!