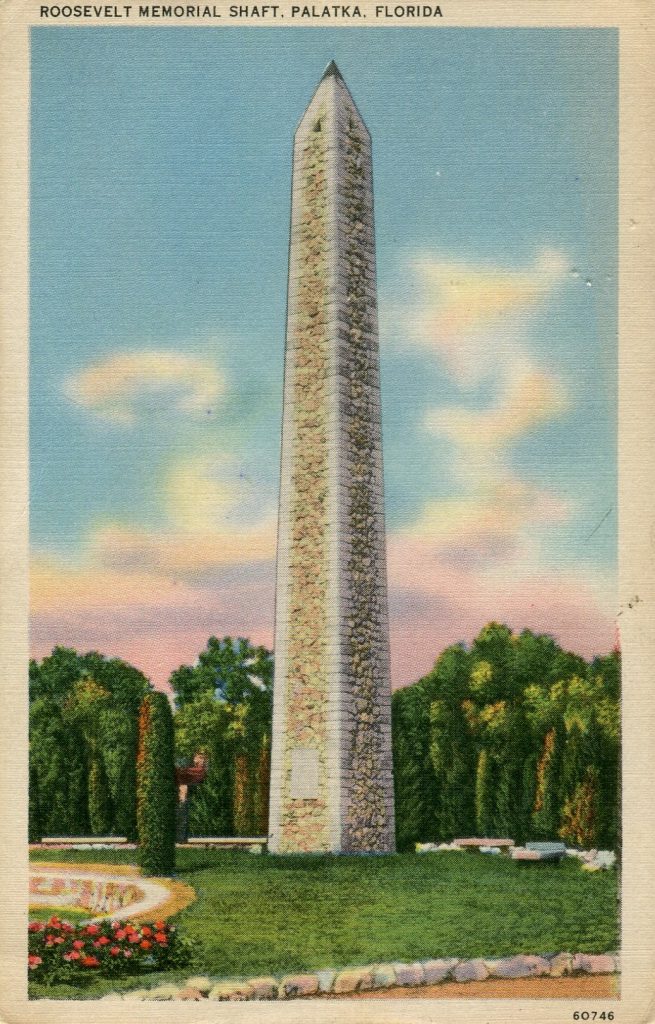 I sending you this postcard to say I love you
but I cant be home at Xmas. We was planting
Azaleas this month. I get the day off at Xmas
I plan to sleep all day.

Palatka, Florida 32177 is the address for just a few more than 10,500 souls. It is located half-way between Interstate 75 and 95 in the middle of Putnam County, about 40 miles south-west of St. Augustine. It is a peculiar spot to find one of the top-10 tourist attractions in the state.

The Ravine Gardens State Park has drawn daily tourists since the mid-1930s. Nature did most of the work, erosion carved the ravine using spring water that bubbles to the surface than drains downhill into the St. Johns River. The 59-acre park is reminiscent of a much different terrain, more like north Georgia or the Carolinas. Tall oaks and poplars dominate the landscape and fallen leaves cover much of the forest floor.

However, the forest is not what the tourists come to see; the parks most enthusiastic visitors are mesmerized by the gardens. The gardens are filled with azalea bushes. One estimate published in the summer of 2000, concluded that at least 120,000 azaleas grow in the Ravine Gardens, and they cover the landscape in blooms of white, pink, blue, lavender and glorious variations still un-named.

In the early years of the Great Depression federal relief money was granted for the construction of the park.  Work began in 1933 with the idea that beautiful gardens would attract those who thought of Florida as a tourist destination in the winter and early spring months.

If there were such people as landscape design artists in the 1930s, it was their choice to plant the gardens to be an all year attraction. Azaleas growing in the south-east have one of the longest bloom-seasons of any flowering shrub – December to May.

Visitors are permitted to drive into the park. At the gate, the 80-foot tall Franklin Delano Roosevelt Memorial Shaft greets every tourist. Properly titled a shaft instead of an obelisk, it was dedicated to our 32nd president in appreciation of the government support for the project. Beyond is the Court of States, where each state of the union is honored by a rough-cut limestone column and flagpole from which the state’s flag is displayed at 45 degrees.

The postcard above and the message it carried home to his mother speaks volumes about the American culture in the post- Depression Era. When we seek to learn about one of the more than 44 thousand projects funded by the Work Projects Administration we seldom concern ourselves with the faceless millions of unskilled young men and women who worked what must have seemed to be endless hours on public projects.

Not all the projects were beautification efforts, most were construction projects such as road and bridge building, sanitation projects and forestry preservation. Wouldn’t it be interesting to see what could be done if our modern day members of congress would read a history book? Or, at least look at a few old postcards!

The Staff of Postcard History offers this article for your enjoyment. It is a combined effort of many: our publisher, editor, webmaster and collectors/contributors far and wide. Please use the COMMENTS feature below to let us know how we're doing.
PrevPreviousFrom the Stork Club to Café Society
NextRadicals in MichiganNext
3 Comments
Oldest
Newest Most Voted
Inline Feedbacks
View all comments
Gail

Wow. Never knew there were that many WPA projects. We certainly could find a similar number of current-day projects to fix the rotting infrastructure and beautify the forlorn looking areas of so many neglected neighborhoods.

I learned that WPA stood for Works Progress Administration, but the agency name was officially changed from that to Work Projects Administration in 1939.

BRAVO for this fine article also…I am a collector of New Deal postcards, and most of what I have are Civilian Conservation Corps camps, but I continue to search for WPA postcards also. So many great projects here in our state and all over the country resulted from these good programs. Thanks so much for this fine article.