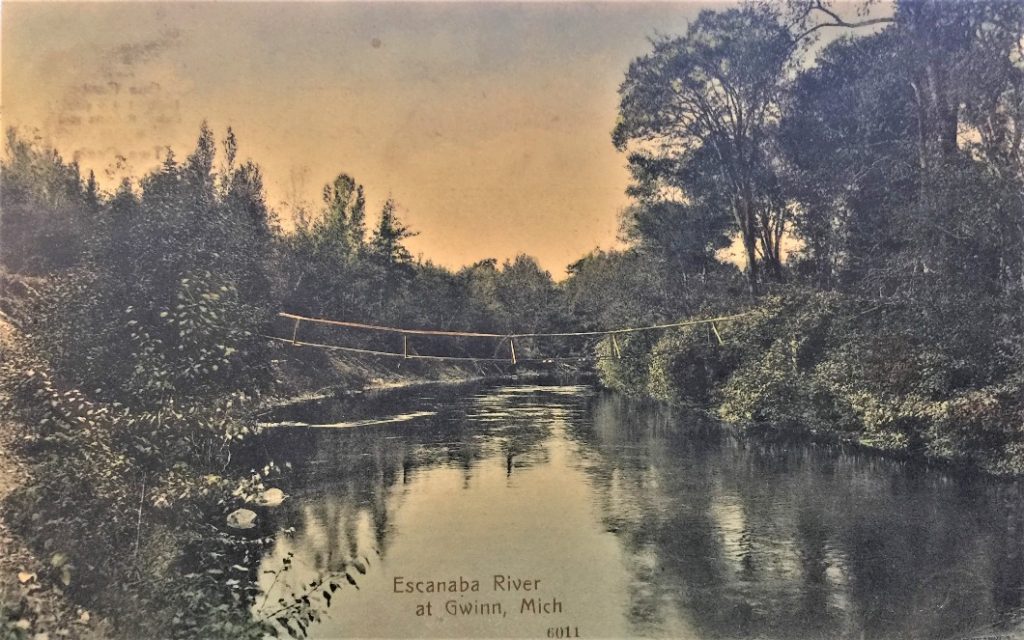 This card features the Escanaba River in Michigan’s Upper Peninsula (The “U.P.”).  It was a beautiful river when this card was mailed on October 16th, 1910, and it still is. The address-side tells a different story. It was written in Gwinn, Michigan and mailed from nearby Princeton to Grand Rapids, Michigan. Both Gwinn and Princeton are in Marquette County, the location of one of the iron ranges of the Upper Peninsula.

Interestingly, the salutation on the card reads “Dearest Comrade.” The message is:

“Meeting here last night on the street – Pioneer work – Sunday morning – a beautiful day here. I wonder how it is around home. Will be in Negaunee tomorrow morning. I wonder if I can hope to receive a letter from ho 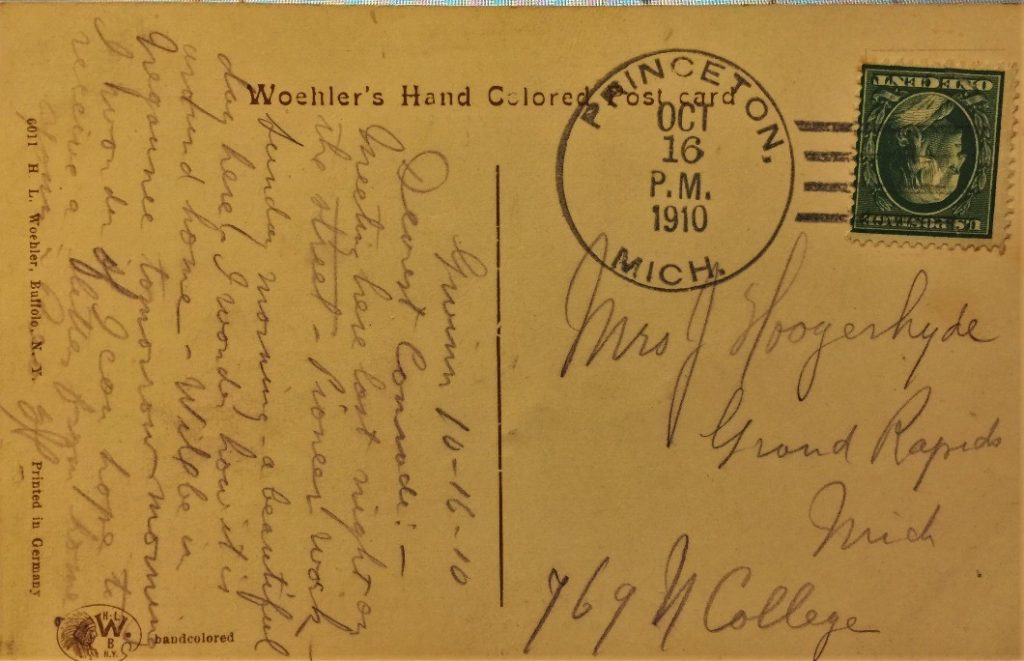 The word “comrade” makes one wonder whether the writer was a Socialist, in the Marxist sense of the word. The use of the word “Pioneer” is also curious since it is associated with Communism.  Research though, reveals the fact that the Soviet Pioneer movement didn’t begin until after 1910.

That leaves one wondering if the writer was a radical or simply someone who used the word “comrade” in its broader sense as a synonym for “friend.”

The clues from the card come not only from those two words, but from the rest of the message, the person to whom it was addressed, and the history of labor relations on the Upper Peninsula.

The Upper Peninsula, a long and beautiful slice of land between Wisconsin and three great lakes was once home to many copper and iron mines. Workers for those mines emigrated from many European nations, notably from around Cornwall in England and Finland. So many people emigrated from Finland to the United States that there are more people of Finnish descent in the U.P. than anywhere outside of Finland.

Ill treatment in the mines caused many of those Finnish miners to turn to religion or communism. In fact, one town had two general stores, one used by the “Church Finns” and the other by the “Red Finns.”

Similarly, strife between labor and management often led to tragedy. Such was the case in the Seeberville Massacre [August 1913], and likely in the Italian Hall Disaster [December 1913] that Woody Guthrie sang about in his song 1913 Massacre.

So, communism was most definitely part of the political/labor scene.  And “comrade” was a term associated with Communism since well before 1910. What of the word “Pioneer”? (Note that it is capitalized.) The Soviets had a youth movement by that name, but not until after 1910. But, in 1910 a Finnish language newspaper that carried the name “Raivaaja” was established in Massachusetts where for the first thirty years of its existence, was associated with the Socialist Party of America. The Finnish word “Raivaaja” translates to the English word “Pioneer.”

About the addressee and the message. The message asks if the sender can hope for a letter from home. This seems to indicate that the sender was writing to a family member. It also talks about a meeting “on the street.” A meeting on the street certainly sounds much more like a labor or political meeting than say, a business meeting.

The card is addressed to “Mrs. J. Hoogerhyde.” It’s worth remembering that in those years it was common for a woman, when using the title “Mrs.”, to follow it by their husband’s first name and their shared last name.

Who was “Mrs. J. Hoogerhyde”? It is fact that James Hoogerhyde of Grand Rapids, Michigan was the secretary of the Michigan Socialist Party in the early twentieth century. He also ran for Governor of Michigan in 1912 and 1914. There is written record of Mr. Hoogerhyde being sent to Marquette County to quell Socialist Party infighting in 1913.

So, was this postcard sent by the man who twice ran for governor of Michigan on the Socialist ticket to his wife in Grand Rapids? The signature line might answer that question. Sadly, the card was written in pencil and that part is indecipherable. Still, given the message, its wording, the salutation, and the recipient, it seems quite likely that this card was sent by Mr. James Hoogerhyde, or another family member or friend involved with the Socialist Party.

Old postcards provide us with pictures of our favorite places as they were in the past.  When we read the message and spend time researching, another, maybe even better bit of entertainment comes from the effort – an interesting history lesson.

Thank you very much!

Interesting article and liked all the info offered. It is fun to track down all those clues, isn’t it, and very clever of you.

Thank you! It really is fun.

The mention of Escanaba reminded me of “Red Iron Ore”, which I learned as a poem but has also been recorded as a song. I never realized so many “Reds’ of the Communist type were involved in the mining and transport of the titular commodity. https://www.youtube.com/watch?v=uE136MWE04A

Thanks for the song!

I appreciated your clinical and objective clarification of these facts. I am fascinated by this bit history. Makes me want to pay even more attention to certain areas of the country. This took effort and you didn’t “re-write” history. Would love to see more. Great job.

Thank you very much! I’m working on another story that involves the photo and message on an old card. I hope to finish it soon.

Wow…everything here seems to be exciting and very interesting, once again. I also collect pinback buttons, ribbons, and badges, and the Labor Movement in our country is just so rich with these items, along with postcards. We all love a detective story and the author has left no stone unturned here. Such a sad story too when you read of the working conditions for men, women, and children too in these golden years of the postcard. It was a real struggle, and all of these immigrants worked so hard and gave so much here. Thanks for this fine article.

Thank you Hal! It is really something to imagine the working conditions. I remember reading that some of the Finns in the Upper Great Lake States moved to the Soviet Union after the Russian Revolution, thinking it would be a better place for workers, but not anticipating Stalin. Apparently some of their ancestors returned when the iron curtain fell.