Arches: A Series, Part I
The Innsbruck Arch,
Innsbruck, Austria

With one of the most beautiful and fanciful arches from around the world, Postcard History begins a new series – Arches. In weeks to come this new series will take us to France, Italy, England, and Spain, then we’ll finish this postcard tour in New York City.

Our first visit is spent at the Triumphal Arch, of 1765, in Innsbruck, Austria.

Das Triumphpforte – The Triumphal Gate is among the many landmarks in the Austrian city of Innsbruck. Located along the Maria-Theresien Strasse (at the southernmost exit from the city), its primary intent was to create a lasting memory of the wedding of Archduke Leopold to a princess of Spain – Maria Luisa.

Archduke Leopold was the second son of the Empress Maria Theresa and Francis Stephen of Lorraine. He was born in 1747 and reigned as the Holy Roman Emperor, King in Germany, Archduke of Austria, King of Hungary and Croatia, and King of Bohemia from September 1790 to March 1792. His reign was a short two and one-half years. He died at age 44. Life must have been difficult, holding down six jobs; maybe he worked himself into an early grave.

At their marriage on August 5, 1765, Prince Leopold was 18; the princess was 19. Less than two weeks later, the prince’s father, Francis, died unexpectedly on August 18.

Suddenly the arch became both a monument and a memorial. The solution was quite clever. The southside of the arch was created with motifs and adornments celebrating the wedding and at the same time the north side became a monument to the dead emperor.

The tradition in those days was to build with wood, but because the new “gate” now served a dual purpose, a decision was made to use stone. As was always the case, new expenditures were impossible, and even in the 18th century city councils exhibited no aversion to recycling if it saved money. The stone used to build the arch was taken from the recently demolished outer city walls.

Over the years, I have discovered five postcards of this arch. One is a real photo, two are monochrome printed cards, one is a colorchrome, and the artist signed version above. This artist version is a view of the south (the wedding) side. It has a divided back. Attempts to identify the artist from the signature have failed, but the date 1914 is clear.

Dr. Dancer is joining Postcard History as a pictorial tour guide. Nate has been collecting postcards for four decades and has amassed a vast collection and stores of knowledge on his favorite topic - public architecture. He recently became a pensioner. He and his wife live in north Scotland with their precious cat named Sage.
PrevPreviousRadicals in Michigan
NextSilhouettesNext
6 Comments
Oldest
Newest Most Voted
Inline Feedbacks
View all comments
Bethebest

Very interesting history. I am wondering if the other side was a “celebration” sort of motif or more somber. Thank you for this bit of history in a far away place.

Alas, Dear Bethebest, Thank you for being interested. I have no answer for you. I last visited Austria in 2003. Guessing is safe when answering questions, so I will say that the two faces in the oval at the top of the arch honoring the marriage would be the only difference. On the memorial side, that image would have but one face.

Postcard History is pleased to fulfill a request to see the address side of this postcard. 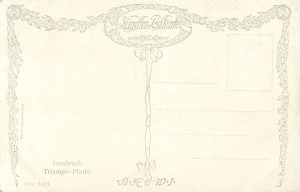 I well remember sending picture postcards of tourist sites to my parents when I was young. I wonder if they still have those…

Very interesting. I hope that your series will also include the Brandenburg Gate/Arch in Berlin – it is rich in history, is in the center of Berlin, and was designed by the famous architect Langhans. There are also many postcards of it!

Alas, Dear Sir, the answer is no, Brandenburg is not part of the series but I once visited and stood in awe of its grace. You should contact the editor and write of the Brandenburg. I shall assist with images if you wish.