Monsieur de Silhouette was not an artist, he was a talented intellectual who understood economics and the habits of mankind. He knew why people misbehaved and had a talent for correcting bad behavior. He also had a reputation that on some days he cherished and on other days he despised.

The loved and yet maligned reputation – he was thought to be miserly – is probably the sole reason we know his name. De Silhouette was much more recognized in the 19th and 20th century, but even today his name is associated with whimsy and fanciful art that is still curious but seldom cherished.

Among the silhouette artists of the last century and a half, to name a few are Manni Grosze, Molly Brett, Margaret Tarrant, Coles Phillip, Marie Louise Reinderhoff, K. W. Diefenbach, and several others that we know only by their initials.

We will return to some of these artists later, but first, here is the story of Monsieur de Silhouette.

For eight months in the middle of 1759, a stately nobleman named Étienne de Silhouette was the French finance minister for King Louis XV. It was midway through the Seven Years War with Britain and generally, a dreadful state of disarray existed in the French court.

King Louis was spending money at a rate so egregious that the country was using about 35% of its income to service the national debt. It became de Silhouette’s unpleasant duty to find ways to levy taxes on the French nobility and pay for the extravagances at court and their military expenditures. 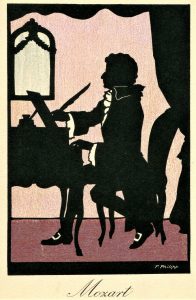 Fast forward 260 years, could we say there is nothing new under the sun?

Since de Silhouette’s service was so short termed, he quickly became an object of ridicule, due to his methods of penny-pinching and buying on the cheap.

During the same time, a newly popular art form was the shadow profile cut from black paper, which provided a simple and inexpensive alternative for those who could not afford more decorative and expensive forms of portraiture, such as painting or sculpture.

Those who considered the new art cheap, attached the word “silhouette” to it. The name stuck and so today, we know this form of art as a silhouette.

Of the artists named above there are three that deserve special mention: Manni Grosze,  Marie Louise Reinderhoff, and K. W. Diefenbach.

Manni Grosze was a German (yet frequently ascribed as an Italian) artist who thrived in the Art Deco era. Some but not all his cards were published by P.F.B. (Paul Finkenrath, Berlin) in series. Two of Grosze’s silhouette Birthday Greetings follow. 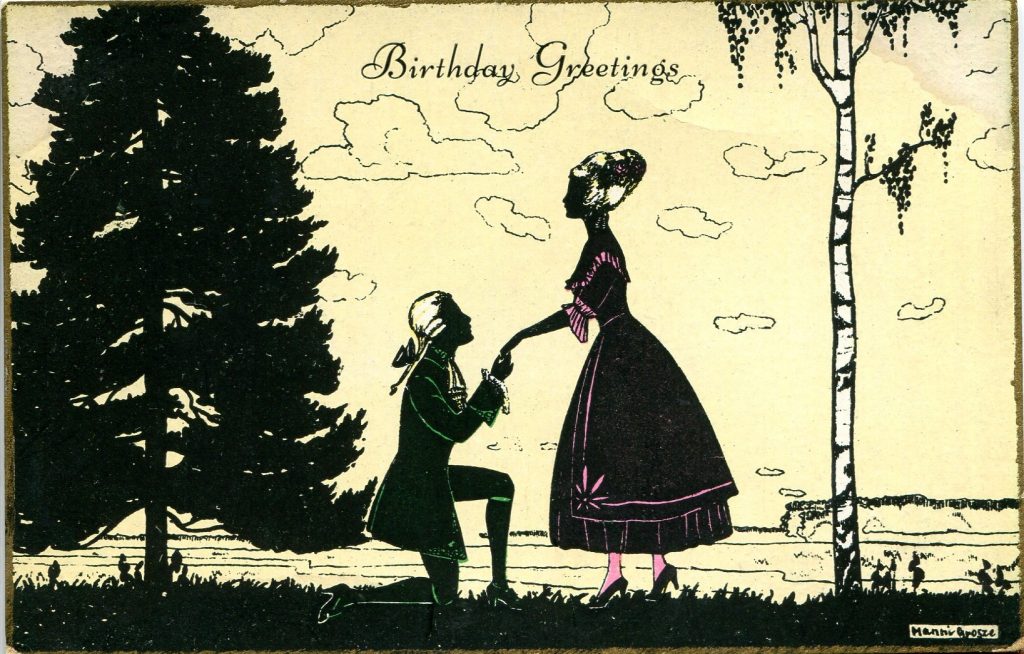 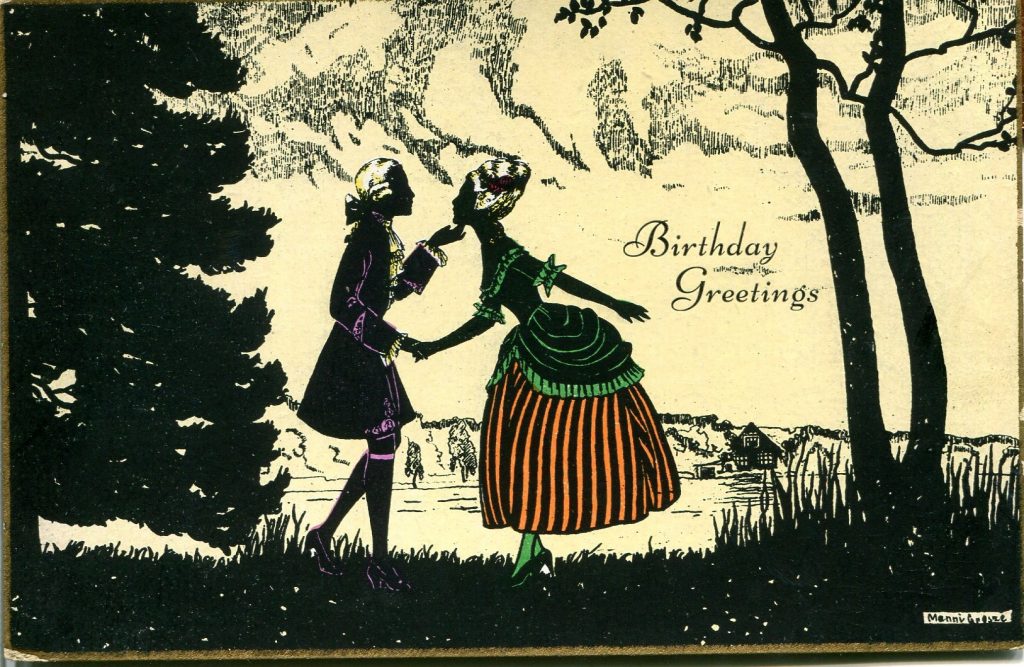 Marie Louise Reinderhoff, like her contemporary Marie Cramer, Marie Reinderhoff was dubbed “Rie” as a child and the name stuck forever. She was born in The Hague and worked as an illustrator and book cover designer. She paid her bills by publishing postcard silhouettes. Here are two of her more detailed issues. 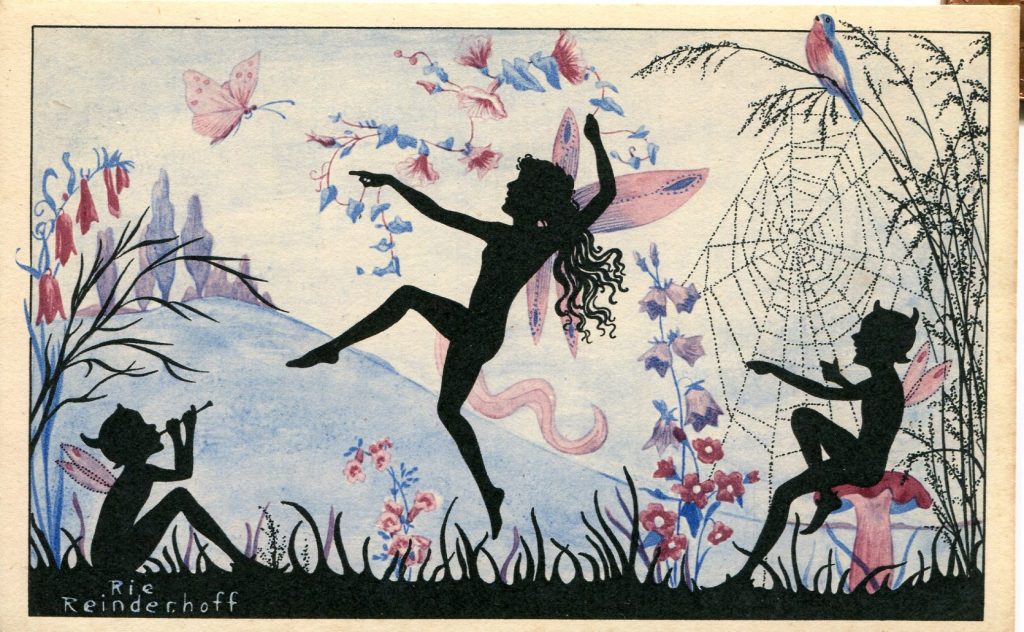 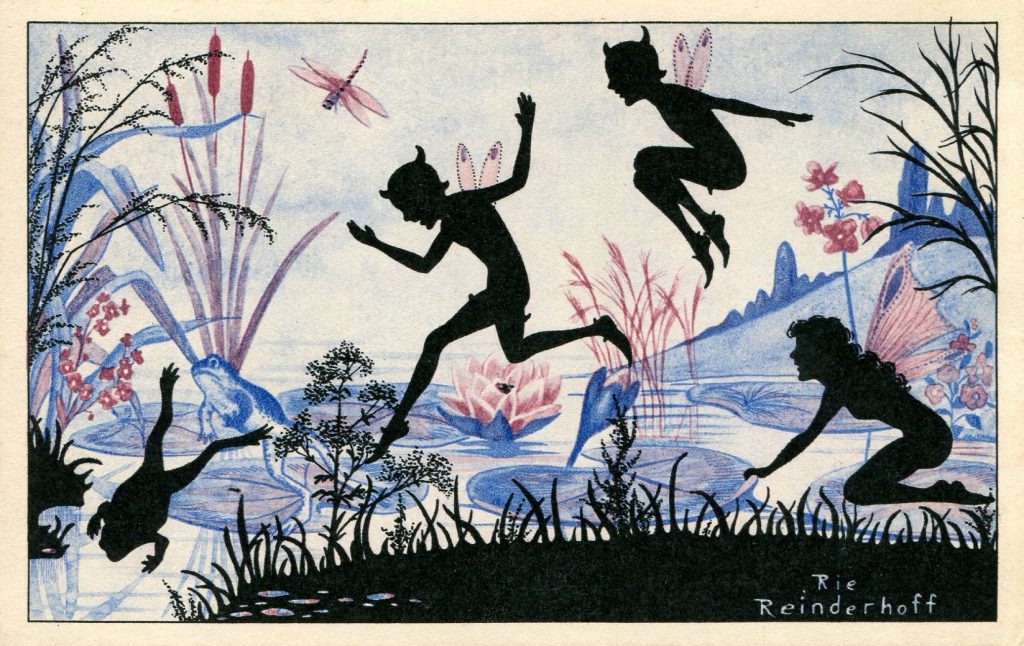 A favorite among the silhouette artist is Karl Wilhelm Diefenbach. Diefenbach was born in Germany in 1851. Most of his serious art is dark and symbolistic, but his silhouettes (nearly all are children in fantasy settings) are simplistic and fluid. 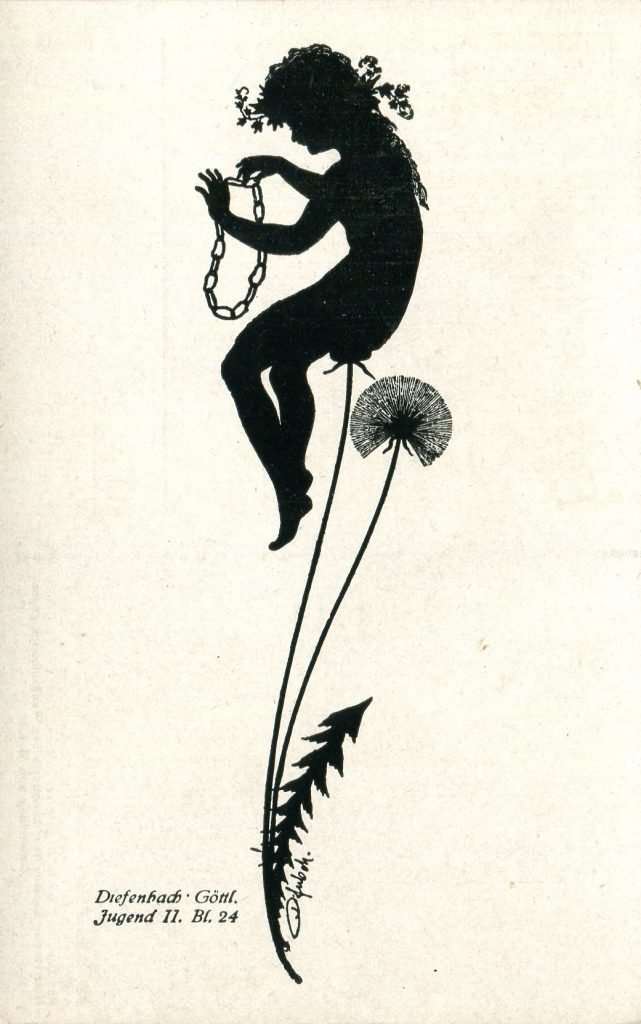 Girl on a Dandelion 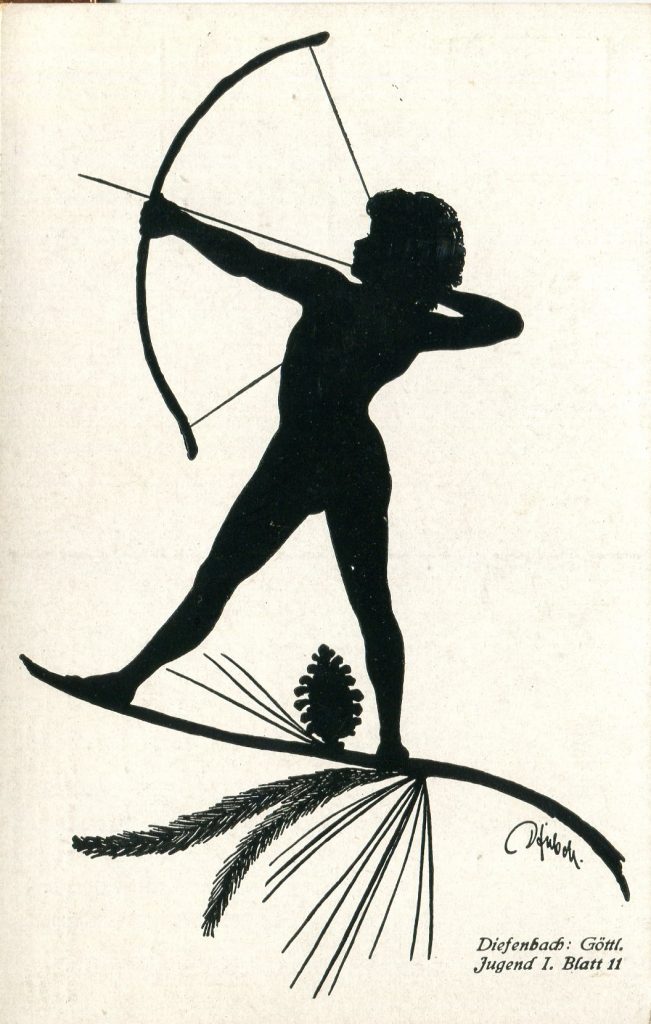 Boy on a Pine Twig

In addition to the artists mentioned in this piece look for silhouettes signed by G.A.S., T.v. B., and S.K. The Mozart silhouette above is by Felicien Phillipp.

Ellie McCrackin is a pen-name used by one of America's foremost archivists. Preferring to remain in the background, Ellie ghost writes for some of the leading world historians. She loves postcards and loves to write about the stories they tell.
PrevPreviousArches: A Series, Part I The Innsbruck Arch, Innsbruck, Austria
NextPostcards as Historical DocumentsNext
2 Comments
Oldest
Newest Most Voted
Inline Feedbacks
View all comments
George Slaton