[Postcard History would like to hear your take on this topic. If you have an opinion please tell us in the comments section below or send email to editor@postcardhistory.net.]

As a collector I am interested in the historic aspect of the cards for two reasons. Starting with the image, it may be safe to say that a high-percentage of the images on postcards have become unique. When taking into consideration that most of the publishing companies that made postcards are long ago defunct and their archives or production records lost or destroyed, the postcard image is the only source available.

For those who collect only used postcards the message is their link to history. I can think of no other way to analyze our ancestors and what their daily concerns were. Just seeing a person’s signature can be an epiphany for some of us.

It should go without saying that nearly every postcard is an historic document since it reflects the time, the place, and the circumstance under which it was used. It may also divulge the relationship between the senders and the recipients.

Photographs stop time for eternity, and the image will live forever but the same cannot be said of the memory. The message enhances the image. It too lasts beyond the memory, but it literally thrills historians as they are now privy to the emotions of the sender and understand what the receiver read.

Below you will find seven unmailed postcards that are truly historic documents. Each has a message signed with the initials, M. H. S. It is impossible to know the sender from initials, but from the syntax, penmanship, and apparent level of education, I propose that the messenger is American, female, and likely in her late twenties to early thirties who is vacationing in Europe (seeing the continent as was once the catch-phrase) with some companions with whom she recently graduated from a university and is awaiting a career in nursing or education.

The messages are both pertinent and timely.

The message concerning the death of the Italian king can be verified, but you will be surprised to learn that his death was at the hand of an assassin (a fact unmentioned in the writer’s message). Other descriptions, like the city square, the placement of statues, and the painting in the Council Chamber are easily confirmed. The most amusing is the remark concerning the quietness of a city lacking traffic noise – however the reason for the quiet might be quite different than our modern understanding of traffic noise. 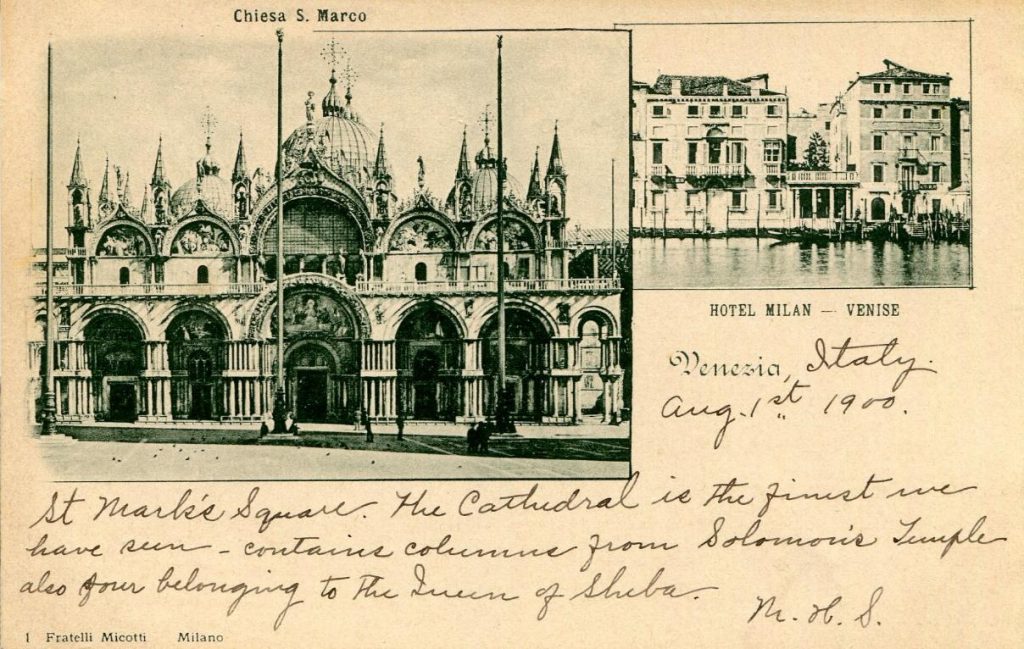 St. Mark’s Square. The Cathedral is the finest we
have seen – contains columns from Solomon’s Temple
also four belonging to the Queen of Sheba. 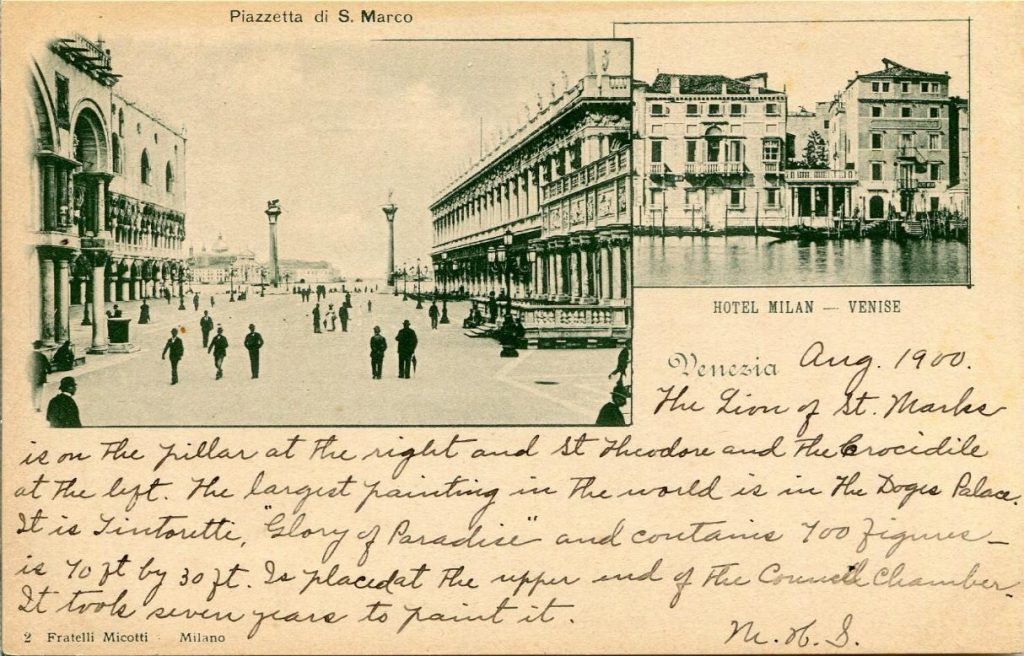 The Lion of St. Marks
is on the pillar at the right and St. Theodore and the Crocidile [sic]
at the left. The largest painting in the world is in the Doges Palace.
It is Tintoretti, “Glory of Paradise” and contains 700 figures –
is 70 ft by 30 ft. Is placed at the upper end of the Councill Chamber.
It took seven years to paint it. 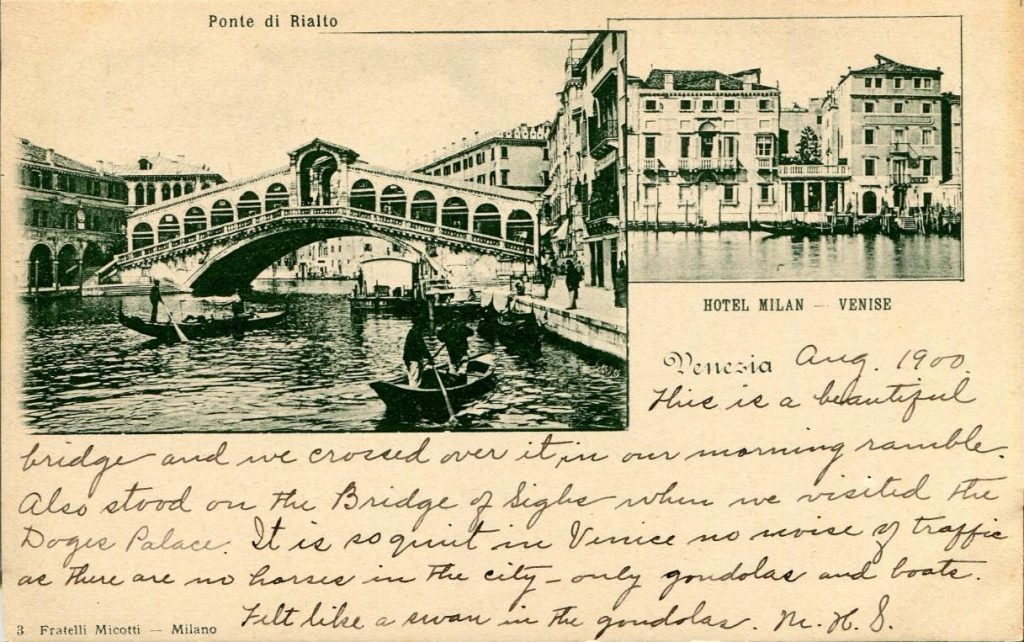 This is a beautiful
bridge and we crossed over it in our morning ramble.
Also stood on the Bridge of Sighs when we visited the
Doges Palace. It is so quiet in Venice no noise of traffic
as there are no horses in the city – only gondolas and boats
Felt like a swan in the gondolas. 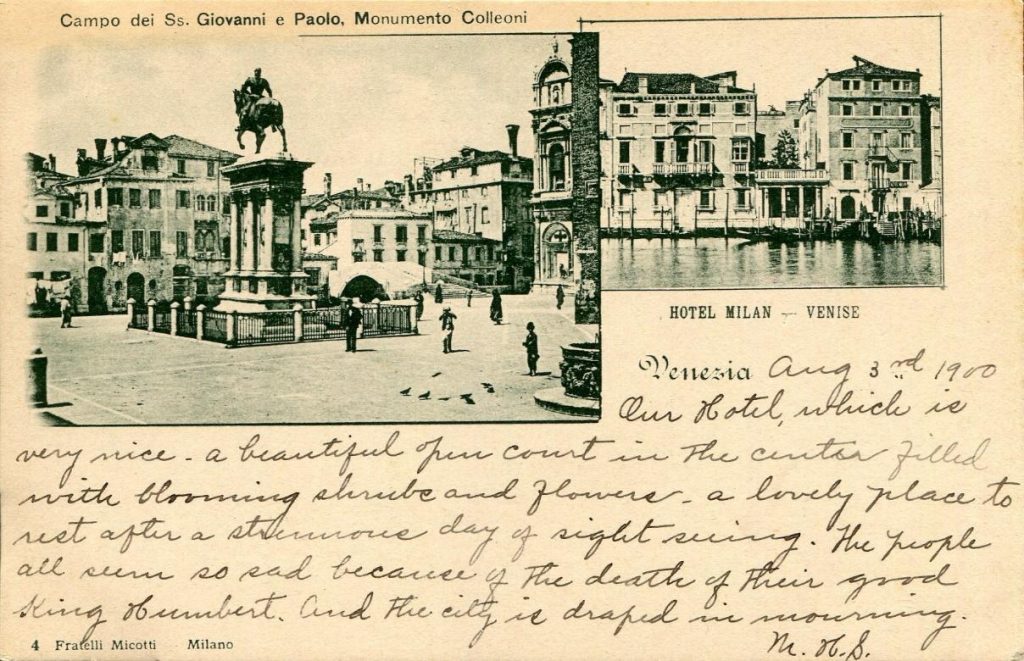 Our hotel, which is
very nice – a beautiful open court in the center filled
with blooming shrubs and flowers – a lovely place to
rest after a strenuous day of sight seeing. The people
all seem so sad because of the death of their good
King Humbert. And the city is draped in mourning. 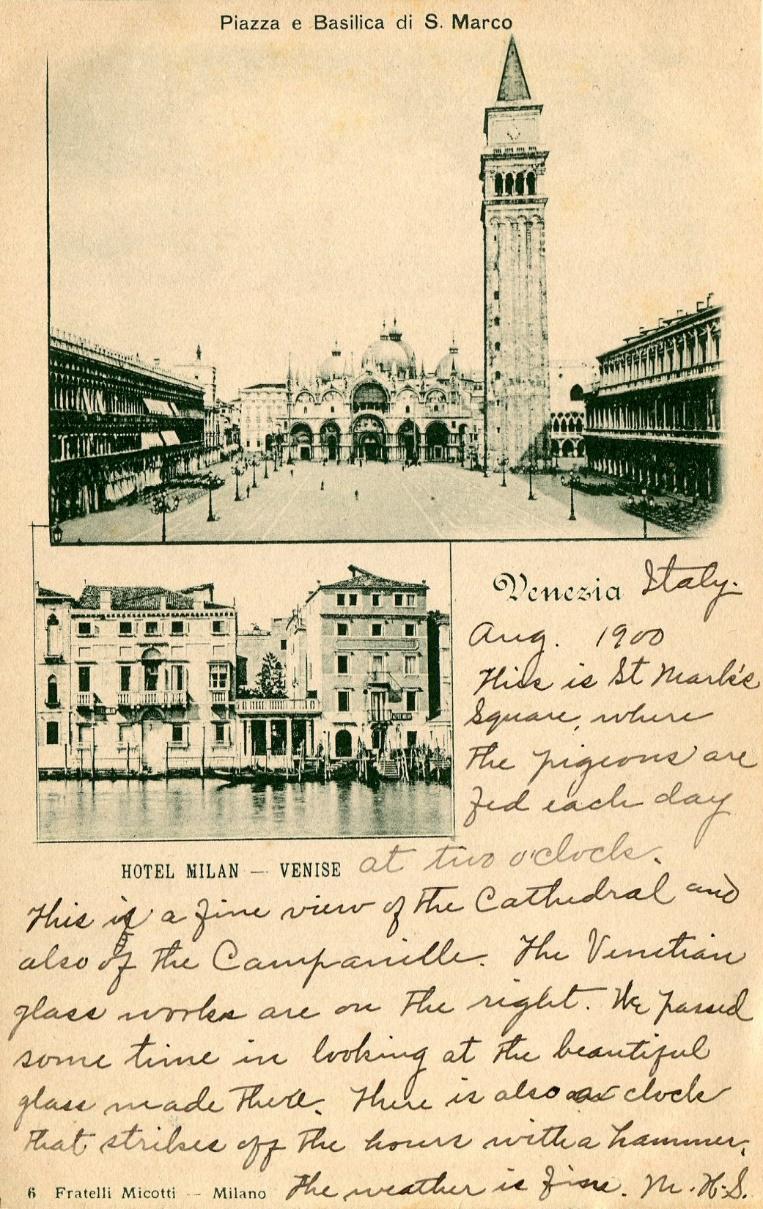 This is St. Mark’s

Square where
the pigeons are
fed each day
at two o’clock.
This is a fine view of the Cathedral and
also of the Campanille [sic]. The Venetian

glass works are on the right. We passed
some time in looking at the beautiful
glass made there. There is also a clock
that strikes off the hours with a hammer.
The weather is fine. 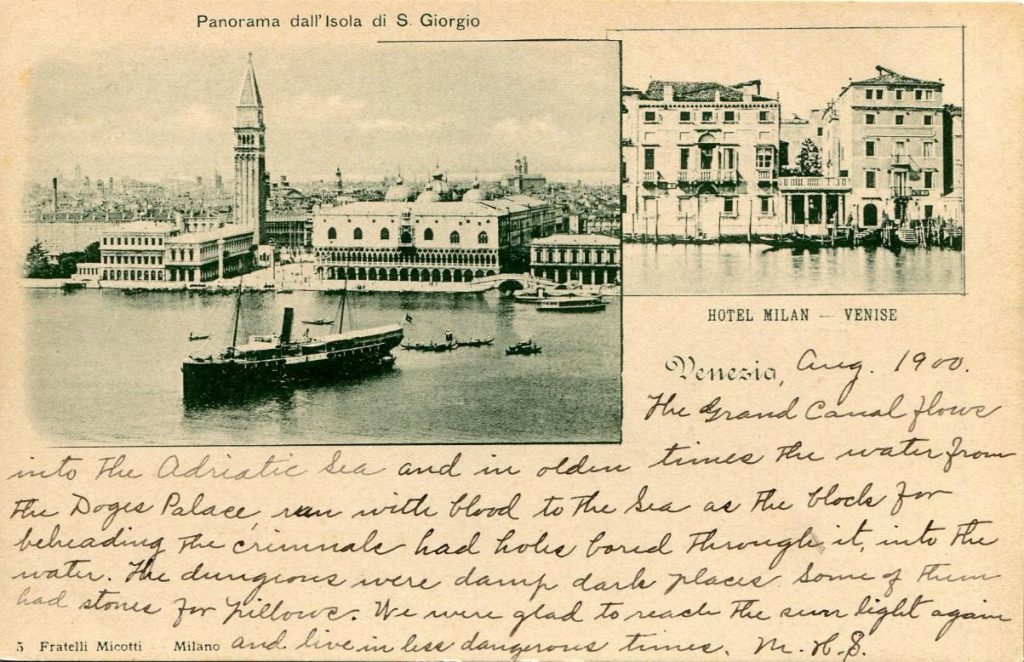 The Grand Canal flows
into the Adriatic Sea and in olden time the water from
the Doges Palace ran with blood to the Sea as the block for
beheading the criminals had holes bored through it into the
water. The dungeons were damp dark places. Some of them
had stones for pillows. We were glad to reach the sun light again
and live in less dangerous times. 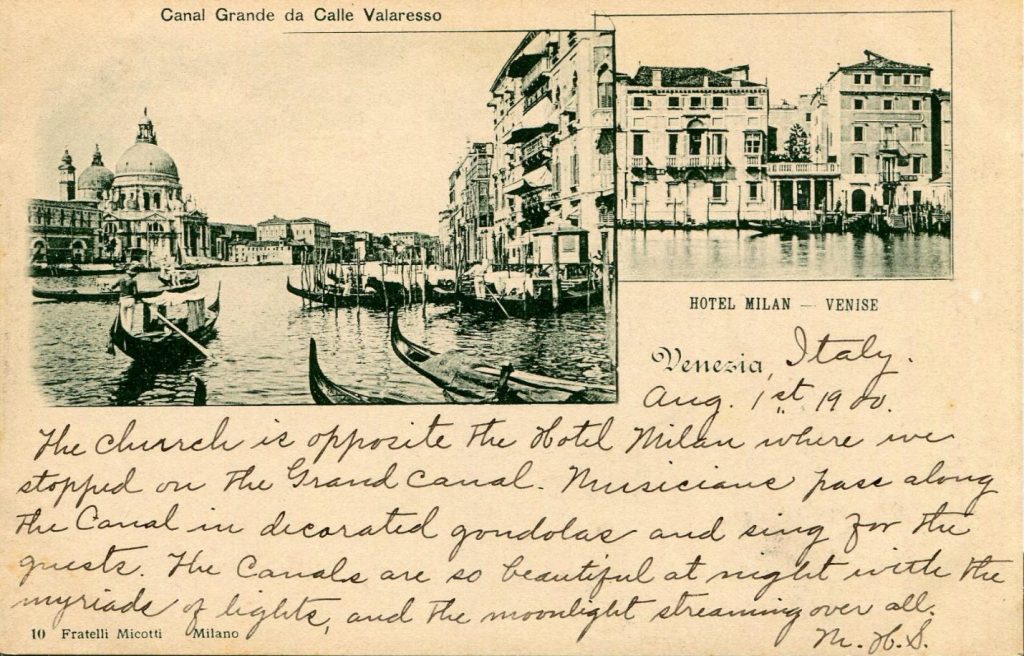 The church is opposite the Hotel Milan where we
stopped on the Grand Canal. Musicians pass along
the Canal in decorated gondolas and sing for the
guests. The Canals are so beautiful at night with the
myriad of lights, and the moonlight streaming over all.

The Staff of Postcard History offers this article for your enjoyment. It is a combined effort of many: our publisher, editor, webmaster and collectors/contributors far and wide. Please use the COMMENTS feature below to let us know how we're doing.
PrevPreviousSilhouettes
NextOzzie and Harriet and David and RICKEE!Next
3 Comments
Oldest
Newest Most Voted
Inline Feedbacks
View all comments
Bob Kozak

The mention of the king’s death reminds me of collector Anne Schuster’s favorite postcard message. After a long list of farm chores recently completed, the sender appended “P.S. Pa died.”

Excellent example of history by postcard. Really enjoying your work. This is my favorite so far.
Thanks!