Ozzie and Harriet and David
and RICKEE! 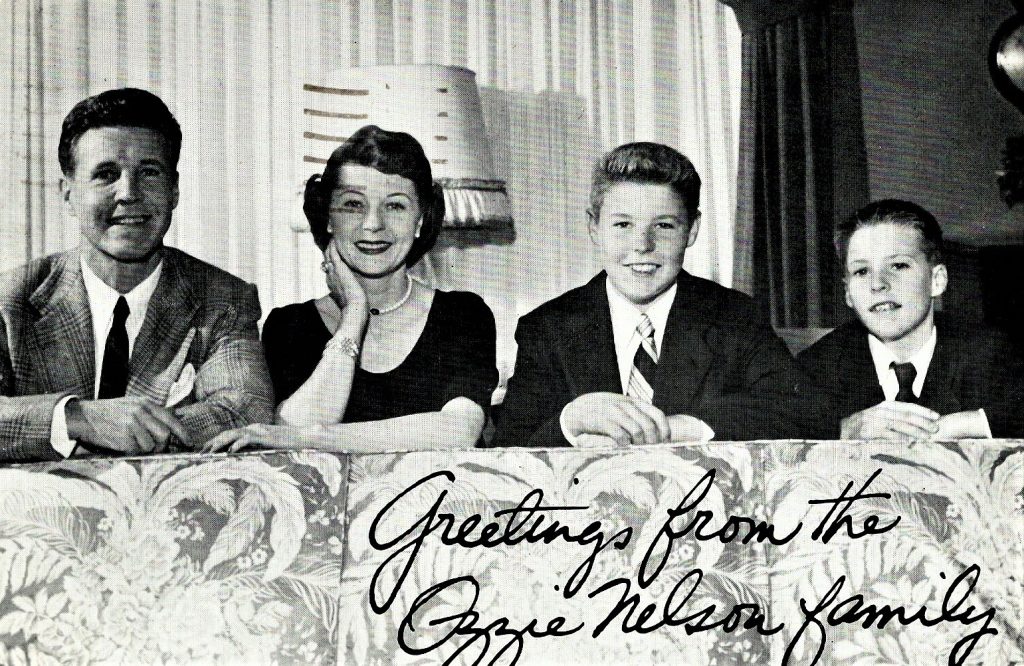 The Big Band era spanned roughly the time between the World Wars. Not that it didn’t have roots in the Jazz Age of the ’teens, and not that it didn’t linger into the 1940s, but big bands were a major form of the musical scene in America for over 20 years.

For one thing, their music was danceable. Look at any of the movies of the time and notice that, when the band begins to play, couples get up to dance. Big bands had personalities, usually their leaders who sometimes sang or played an instrument. Big bands had vocalists, often “girl singers,” who could harmonize with the band’s leader, which meant that the sheet music and the records of their songs furthered the band’s popularity. And perhaps most important, the Big Band Era coincided with the advent of talking pictures and radio.

Ozzie Nelson had a Big Band. In his mid-20s he formed “The Ozzie Nelson Band” (he played the saxophone) and had some success with it during the early years of the Depression. In 1930 the band won a contest sponsored by [William Randolph] Hearst’s New York Daily Mirror as the most popular band in the city.

Beginning in the mid-1930s and into World War II, Ozzie moved into films (four feature films from 1941-1944) and eventually into radio. The family moved to California in 1941 when Ozzie and Harriet were booked to make regular appearances on Red Skelton’s radio show. When Skelton was drafted in 1944, the show’s producer invented “The Adventures of Ozzie and Harriet” as the replacement show.

Initially the show had only Ozzie and Harriet playing themselves (David and Ricky were voiced by actors). By 1949, though, David and Ricky were playing themselves. In 1952 they made a movie, “Here Come the Nelsons,” which featured the entire family (it premiered on February 23, 1952). The film was a success and proved to be the pilot for “The Adventures of Ozzie and Harriet” television show, which launched on October 3, 1952. The opening picture of each episode, the house shown in this postcard, was their actual home, at 1822 Camino Palmero Street in Los Angeles. 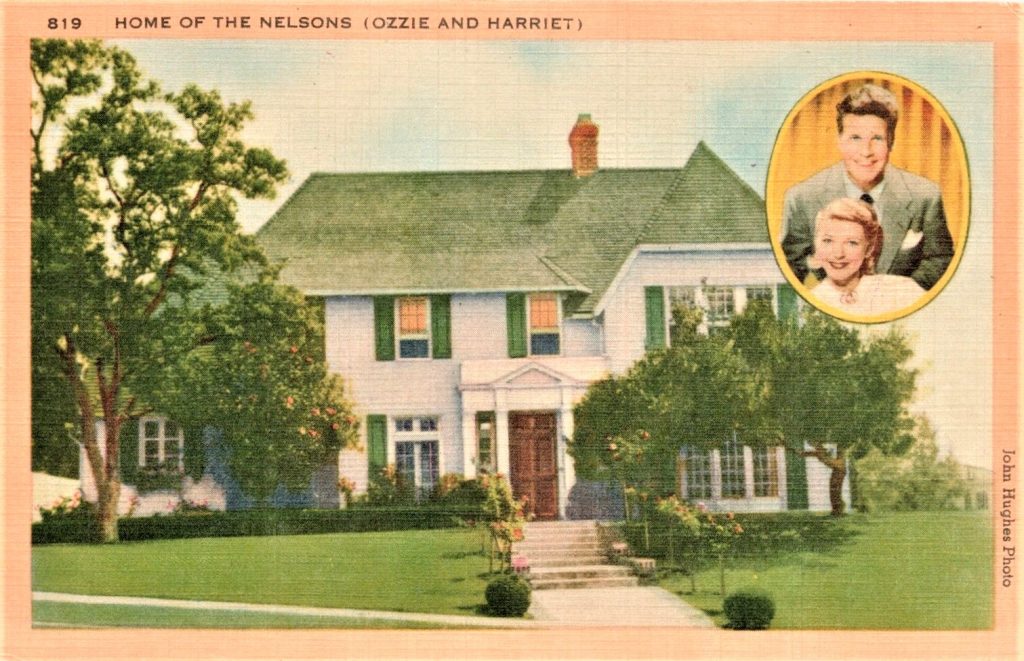 Home of the Nelsons

The first episode of this situation comedy set the tone for its 14-year run. The brothers liked each other but bickered; Ozzie was a somewhat clueless sole breadwinner who unsuccessfully tried to control their behavior; and Harriet was the rock of the family. You would never have known that Ozzie used to lead a band or that Harriet had been a vocalist with that band.

David and Ricky attended Hollywood High School, which was notable for its willingness to accommodate students’ schedules in the television and movie roles.

Ricky developed an interest in performing music, especially the drums and the clarinet. Just before his seventeenth birthday, Ozzie wrote him into the 28th episode of the fifth season, titled “Ricky the Drummer,” which aired on April 10, 1957. His appearance (starting at 19:20) is where he sings Fats Domino’s standard “I’m Walkin’.” Ozzie had already had Ricky record the song as a single in March and released it in late April 1957. The episode featured teenage girls screaming over Ricky’s performance.

Ricky Nelson was on his way to being a teenage musical idol. 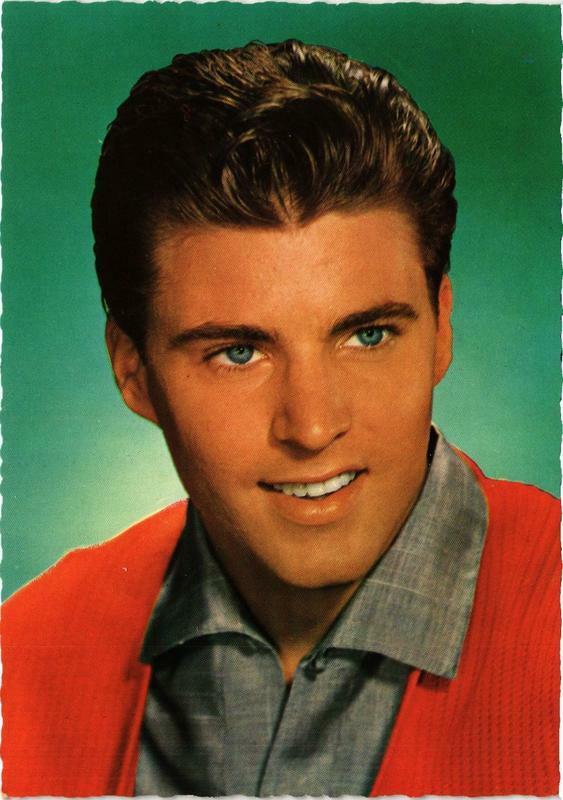 When The Adventures of Ozzie and Harriet went on its 1957 summer production break, Ricky toured a series of summer fairs in the upper Midwest. The Four Preps, who were having their own musical success, opened and closed his appearances.

That September, Ricky released “Be-Bop Baby.” It sold almost a million copies (that is, single 45-RPM records) and rose as high as #3 on the Billboard Hot 100 and #5 on the R&B chart in 1957. Then he released his first album, Ricky, in October. By the end of the year it had reached #1 on at least one of the Billboard charts.

From 1958 to 1961, Ricky had some 30 songs on the Top 40 charts, more than anyone except Elvis Presley and Pat Boone. His astute use of television appearances and touring generated publicity and the occasional oddity — as he told the UK’s New Music Express (NME) in 1960, “Perhaps the most embarrassing moment in my career was when six girls tried to fling themselves under my car, and shouted to me to run over them. That sort of thing can be very frightening!”

His career stagnated as the counterculture movement of the 1960s grew and the “British Invasion” happened. He shifted to recording songs with a country and western sound, but not until 1970 did he have a single that reached the Billboard Top 40 with Bob Dylan’s “She Belongs to Me.” 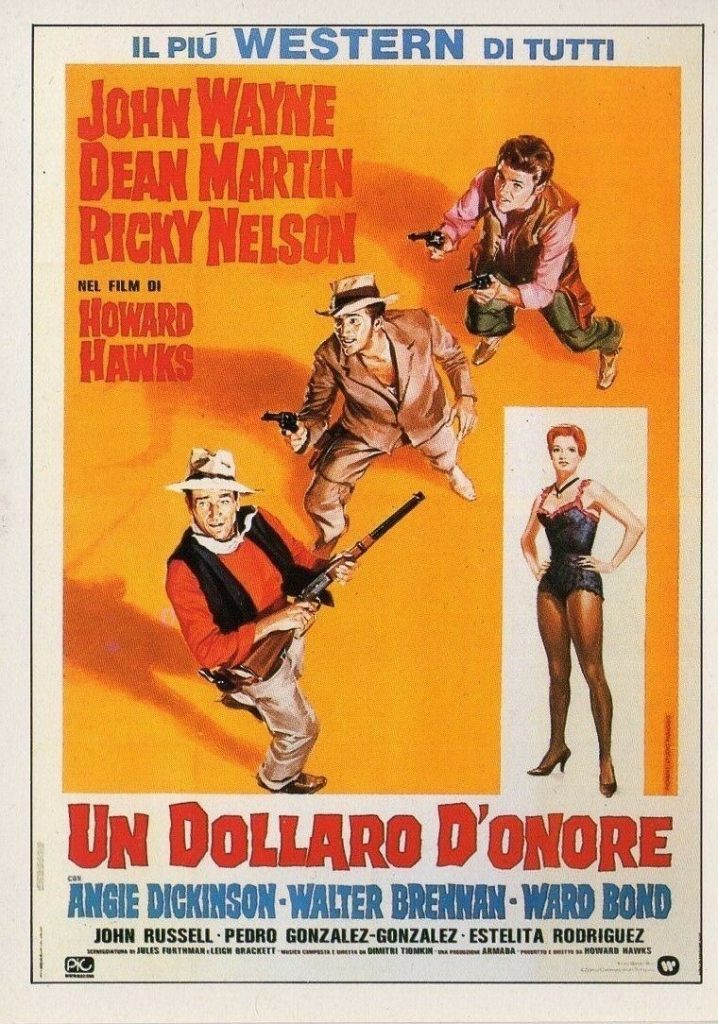 The postcard of the Italian release of “Rio Bravo”

Rick had been doing movies since Here Come the Nelsons in 1952 but his first adult role was in Howard Hawk’s Rio Bravo (1959) with John Wayne and Dean Martin. (Both Martin and Nelson had singing roles in the film.) He co-starred in 1960s The Wackiest Ship in the Army with Jack Lemmon and shuttled between movies and television appearances through the 1960s and into the 1970s.

In 1972 he tried to rescue his music career in an oldies concert at New York’s Madison Square Garden. But he was booed, perhaps because he wasn’t singing his old songs but perhaps because of unrelated nearby police action. Out of that experience he wrote “Garden Party,” which reached #6 on the Billboard Hot 100 and #1 on the Billboard Adult Contemporary charts. It was certified as a gold single and was his last hit.

His recording label now saw Rick as a former teen idol. Successive albums went nowhere, and he began taking supporting roles on television shows and went on the road to theme parks. This may have been because his 1963 marriage to Kris Harmon evolved into high costs of living. A publicly spectacular divorce in 1982 not only did nothing to resolve his finances but increased the pressure on him to continue on the road.

A 1985 “Comeback tour” was arranged and he joined Fats Domino, even going so far as to become “Ricky” again. The songs were his oldies and he even did an album, Ricky Nelson: All My Best.

His comeback was cut short when, while on tour, his personal DC-3 plane crashed on New Year’s Eve, 1985. Even in death there was controversy. In his will, he left everything to his four children, disinheriting his wife.

Youtube.com helps us remember the Nelsons.

To enjoy the first episode of the Adventures of Ozzie & Harriet

Bill Burton began collecting Ossining, New York postcards when he lived in that Hudson Valley town. His collection expanded, of course, to include his college, the neighboring towns, and places where he and his wife traveled. In retirement, he's refocused on Delaware and the DelMarVa peninsula towns, but he’s just as likely to be found parked in front of the 25¢ boxes at shows.
PrevPreviousPostcards as Historical Documents
NextArches: A Series, Part II – L’Arc de Triomphe, Paris, FranceNext
4 Comments
Oldest
Newest Most Voted
Inline Feedbacks
View all comments
Stefan Sommerfield

A great memory boosting story. I watched the TV show for years, fan of lots of 50s & 60s rock and roll including Ricky Nelson. Stories like this are also terrific for younger people who missed this television period.

Drove from San Francisco to Anaheim, for Disneyland exploration. Late afternoon performance at Knott’s Berry Farm, the following day, headlined Rick Nelson. As part of admission, companion and I settled in. The outdoor set was not boring nor teeny-bopper, which was expected. Memory says this was late year, 1974, with a meet and greet, afterward.

The experience remains the most surprising of the 200+ I’ve attended.

I became a Ricky Nelson fan back in the early 80’s and loved his late 50’s recordings. Sad end to a short life. Never watched the show, however.

“The Adventures of Ozzie and Harriet” was before my time, but I remember Ozzie advertising pain relievers and a short-lived show called “Ozzie’s Girls”. I also have a recollection of Rick’s release of “Garden Party”.