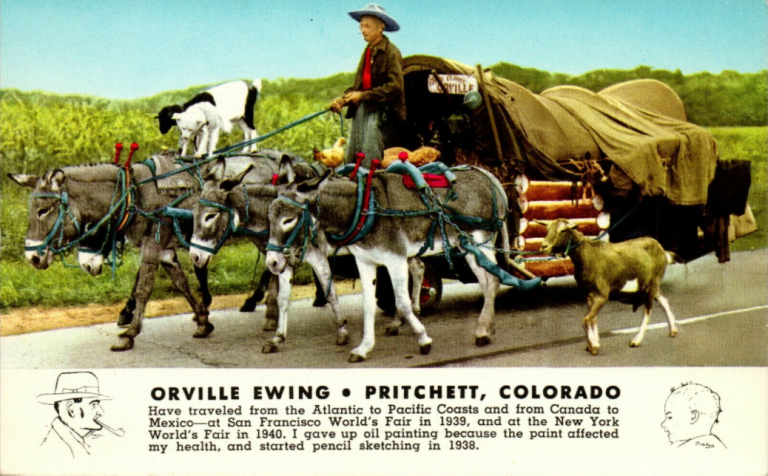 In the decades between the world wars, plus or minus a few years, Americans lived through a long list of trials. To name a few, the Spanish-Flu pandemic, prohibition, dust-storms, the Great Depression, and numerous political scandals ranked near the top of the Misery List.

These facts of history created a small but very notable segment of society known as the “Thirty-Niners.” I know the term sounds like a legendary sports team, nevertheless the original Thirty-Niners were not athletes, though a few of them became legends.

The hundreds of men (and women) who traveled the country, near the end of the Great Depression in old trucks or mule wagons, have appeared on many postcards and there are vast collections of the cards being held today by collectors who have no memory of any of the “characters of the era.”

W. “Will” R. Willey
Some collectors have written of the Thirty-Niners in club bulletins and some of the articles are scholarly and well-illustrated. In the most recent iteration of the Thirty-Niner tales the author singled out a simple soul named W. R. Willey. Willey had the persona of a Hollywood caveman, who frequently found himself in trouble with the law because of his style of dress. It was frequently the case that Will Willey bothered no one except the police. His habit of going barefoot – even in winter – was his most serious crime. No one knows for sure, but a contributor to a mid-west club newsletter suggested that he may have been arrested seven times for the crime of indecent exposure. Will’s other character flaw seemed to annoy the police too, he usually wrapped himself only in animal skins and leather belts. 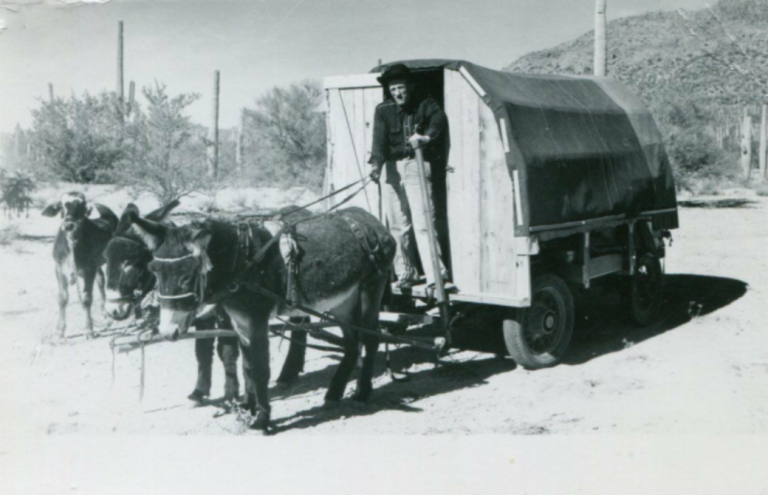 Peter Voss
Voss should not be confused with the late 1950s, slap-stick comedian or the earlier Nazi S. S. officer. His public image changed drastically when he left Illinois, but he developed into a Thirty-Niner character that was nearly as eccentric as Willey. Voss was born in the Netherlands in the mid-1880s and immigrated with his family to Illinois in 1905. Much of his life he worked odd jobs and farmed a small piece of land about eighty miles south of Springfield, Illinois. When the economy went bad in the early 1930s, Peter lost the little he had to the tax collector. His three mules and a box-wagon with a Conestoga cover were the last of his possessions. He headed west. In his later years, Voss (and likely thousands of other men who wore full beards) had a strong resemblance to George “Gabby” Hayes. When he was “recognized” he did little to disavow his admirer. 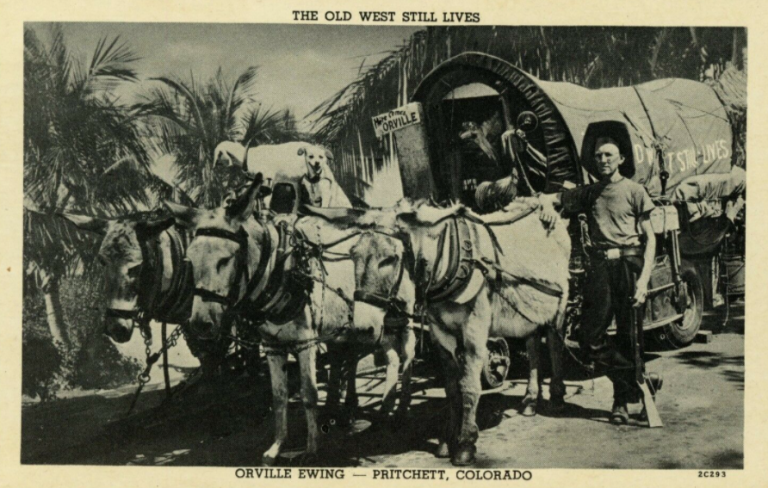 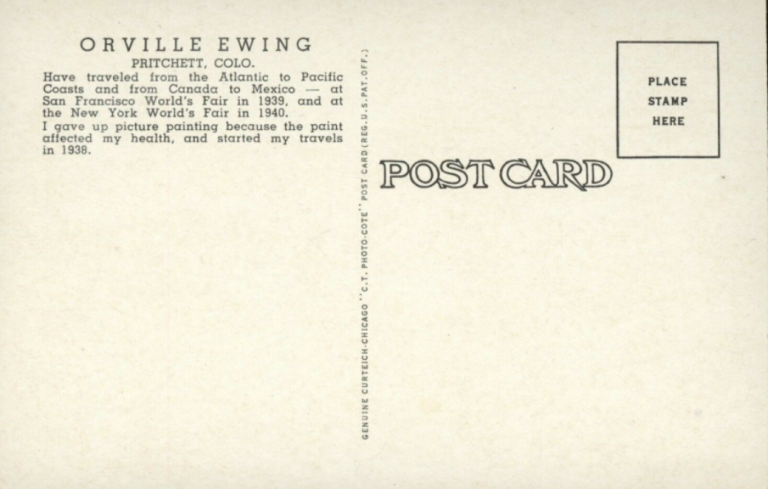 Orville Ewing was born in Indiana on July 17, 1888 to Charles and Lily Ewing. He was the eldest of their three sons. Robert and Charles, Orville’s younger brothers followed their father as Indiana farmers, but Orville made plans early in life to be an artist and his first step toward that goal was taken when he left Boone County, Indiana, for the lush farmlands of southeastern Colorado. He landed in Las Animas County, where he could farm and earn his own living without the worry of providing for others. He was 31.

The 1920 Federal Census shows Orville in Las Animas County, Colorado, working on his own account as a grain and stock farmer. In 1925 Ewing abandoned farming and in 1926 married Olive, a Nebraska farm girl, nineteen years his junior. When the Santa Fe Railroad arrived in southeastern Colorado, the Ewings moved to Pritchett, a new center for the ever increasing population of Baca County, and by 1930 Orville and Olive are well established residents operating a sign painting business as both husband and wife and artistic partners.

When the Dust Bowl sandstorms arrived in the 1930s, Baca County was one of the hardest hit counties in the country. Baca’s population declined from 10,570 in 1930 to 6,207 in 1940. The “Dirty Thirties” prompted soil conservation efforts by the Federal Government centered in Baca County, but by then Orville was long gone. He left, with Olive’s blessing in 1938 to pursue a new career as a traveling artist. 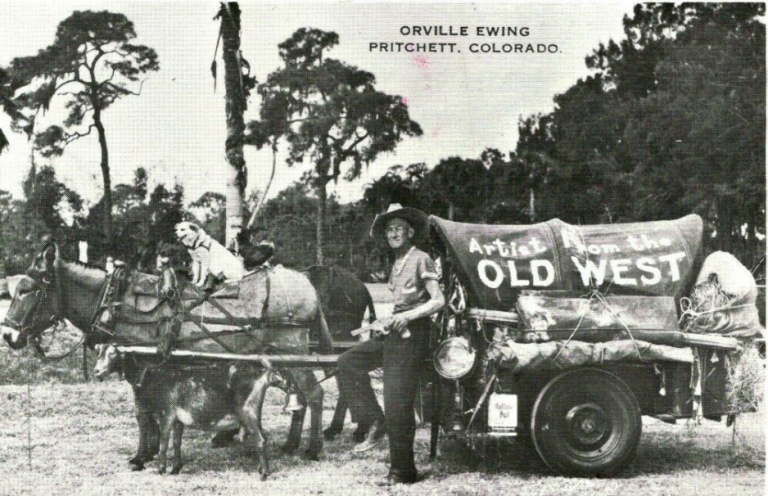 Many reports tell of Orville’s failing health and his ailments being aggravated by the oil paints he used in his painting business, to wit, it was time to experiment with pencils and crayons as new media for doing sketches that he could sell. He found himself quite skilled at sketching and with his drawings and postcards like the ones above, he sold enough to feed himself and his menagerie and to finance his travels. 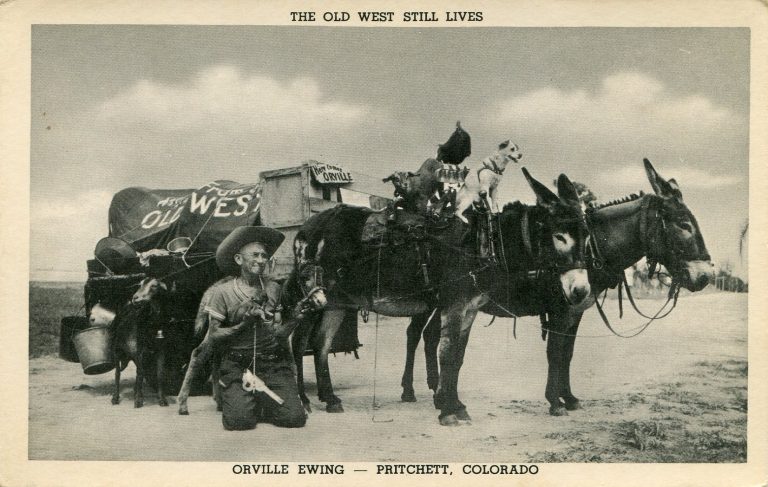 When Ewing returned home and permanently ended his nomadic adventure, twenty-six years had lapsed. In those years thousands from the American heartland, as well as from the Pacific Northwest, and those who attended the New York World’s Fair (1940) on Long Island, had seen Orville wearing a bright orange shirt, leather vest, black cowboy hat, and a well weathered skin. He sat atop his ox-drawn wagon that was covered with tan canvas, had red wheels and a green body, and, for the most part, he let the world come to him. His observers heard the banging of his pans, pots and the feed bucket that hung from both sides of his wagon. They saw the rattletrap platform extension, at the rear of the wagon, where his daily wash was left to dry.

When traveling, his dogs and his hens would ride on the back of the ox and the goats were on leashes tied to the back of the wagon. Ewing once bragged that his rate of travel allowed him to cover ten miles a day. It is unknown if his claim was ever challenged.

“Mr. Ewing, who is 76 years old,” it was reported by his hometown newspaper in 1964, “spent his first morning at home looking in vain for a hitch rack on which to tie his ox.”

The one thing these three travelers had in common was that they sold postcards of themselves to finance their lifestyle. 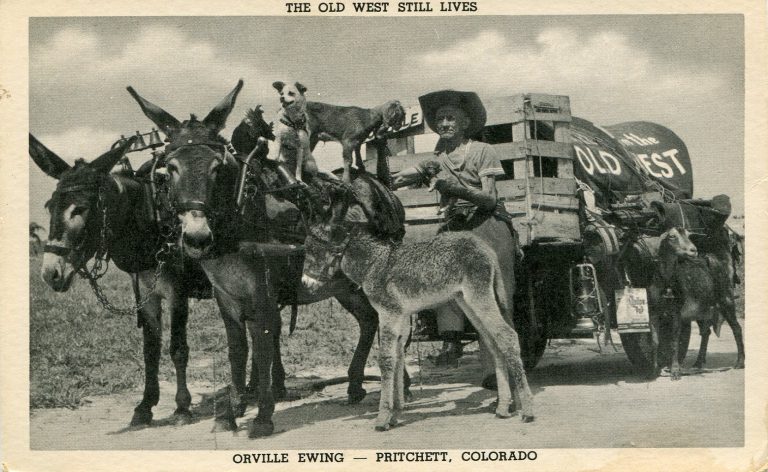 * There are numerous accounts and newspaper stories about the men in this story and it is commonly known that each one earned significant amounts of money selling postcards. The diligent enthusiast will find some at most shows. The Ewing cards are plentiful, but the same cannot be said of the Voss postcards; only one has been found.  The later of the Ewing cards that were produced by Curt Teich are in color-chrome. Regarding Mr. Willey, I have yet to see a first one.

Ray Hahn is a retired educator, but he has never stopped teaching. His decades of researching, writing and editing a newsletter for the South Jersey Postcard Club has been a world-class education in trivia. In addition to postcard collecting, Ray’s other interests include history, genealogy, and touring the world with his wife Marie. Ray often advises his readers to "Join me as we explore the world one postcard at a time." Ray and Marie live in New Jersey.
PrevPreviousArches: A Series, Part III-Rome, the Eternal City
NextThe Ballad of Sally Brown by Thomas HoodNext
5 Comments
Oldest
Newest Most Voted
Inline Feedbacks
View all comments
John

Does Ezra Meeker fit in the category of Thirty-Niners or was he before this group?

Meeker began his itinerant promotion of the Oregon Trail in 1906 and dies in 1928, so he predates this group. He likely served as an inspiration to some of the Thirty-Niners, though.

Very interesting and a subject I knew nothing about until now. Another thing that might cause such wanderlust is also unrequited love, and this article reminds me of a well-known German Romantic-era poem entitled “The Broken (little) Ring”:
https://en.wikipedia.org/wiki/Das_zerbrochene_Ringlein
The third (translated) stanza reads as follows:
“I fain would mount a charger
And glory seek in fight,
By silent camp-fires lying,
When falls the dark of night”

My wife and I met Olive Ewing and her son and daughter in the early ’90s in Pritchett. I had amassed dozen’s of Orville’s postcards (along with Ratliffe, et al.) in my goat collection. A great artist he wasn’t, but it was a lot of fun hearing some of the family tales first hand. Those were pre-internet days, and the research for my articles in Barr’s was limited to postcards and newspaper archives. I’m impressed and informed by Ray’s article.

Enjoyed reading the article about Orville Ewing Because I have one of his postcards in my collection
when he visited the 1940 New York World Trade Fair. 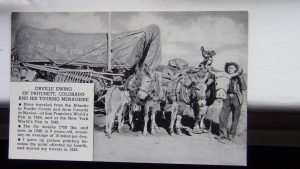