I have collected postcards for most of my life. I started when a boy, but like so many others, I neglected my collecting responsibilities for many years and did things like graduate high school and attend college. I found a wife (I got lucky on this one, one wife lasted me my whole life), had children and found a profession with a salary sufficient to pay for a contented lifestyle. It was not until I locked the door on my thirty-five year career, that I got serious about cards in specific categories with enough tenacity to make me want more and more and more. My collection is eclectic – lots of different topics, but the ones I like best are cards with foreign language captions. 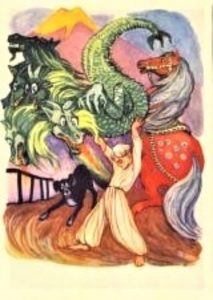 People who give collectors postcards for Christmas are most likely not doing the collector much of a service. They either give cards you don’t collect, or they give cards you already own. How are they to know? But this Christmas, my family really got it right – they gave me some beauties.

The cards are not old. That is my way of saying that cards manufactured while I have been alive are not antique – these come from the 1960s and were published in Moscow. They are continental size, artist drawn images of fairy tales, and they have captions in a foreign language – Russian.

I claim no skill in Russian, but I was able to translate three words; one on each postcard; Azerbaijan, Ukraine, and Russia all followed by the word “skazka,” which I have later discovered to mean “fairy tale.” 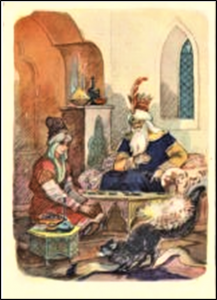 rainian card, showing a five-headed dragon is amusing for its color and action. The young lad is perhaps a Ukrainian version of Saint George (the dragon slayer). Look at the bewilderment in the eyes of the dragon: priceless.

The Azerbaijani card is from a place with a large Shiite Muslim population that certainly owns folklore and legend similar to other Arab cultures such as those that spawned Scheherazade, the mythic Persian queen, and her One Thousand and One Nights.

The Russian card showing the forever unfortunate Russian wolf is my favorite.

The Legend of the Fox and the Wolf

One day, returning to his home with his catch of fish on a sled, a fisherman happened upon a fox. The fox lay limp in the snow and appeared half-dead. The 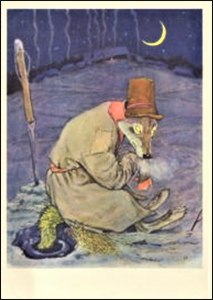 kindly fisherman soothed the fox with words of better times ahead and allowed her to ride on the sled with the fish. As he trudged homeward, the fox slyly dropped the fish off the sled one by one.

Upon reaching his home, the fisherman didn’t notice that most of his fish were missing, but took what fish were left into the house along with the fox. When the fisherman left the room, the fox got up and went to the kitchen. She found some sour cream, a chicken, and a napkin. While trying to gather up the fish that were left, the fox found herself unable to carry them all, so she tied the napkin to her head, smeared sour cream on her face, and stuffed the chicken in her pocket.

The fox then set out on the path that brought her to the house, and on her way, she met an injured wolf. The wolf explained that he was in a fight with a bear and that he had broken his leg.

The sly fox played lame as well and convinced the wolf that she was worse off than he. “Look at what the villagers did to me!” she wailed, pointing to the napkin on her head and sour cream on her face. Believing the fox, the wolf carried her to the lake where the fisherman had recently completed his day’s work.

The wolf told the fox how hungry he was. The selfish and cunning fox told the wolf that she would teach him an easy way to catch fish. She led the wolf to a hole in the ice and told him to put his tail in it and chant the magic words she gave him. The fox slowly walked away, collecting the fish she dropped from the sled earlier. As the wolf sat there repeating the magic words, the ice hole froze with the wolf’s tail stuck in it.

The sly, old fox had outsmarted them all.

Dr. Donald T. Matter, Jr., was a retired eye-surgeon from Long Island, NY. After giving up his practice, he moved to Arizona, but continued to collect postcards. He also traveled the globe doing eye-surgery on animals. When Don passed away his collection of more than 30,000 cards was auctioned.
PrevPreviousThe Norfolk Coach at Christmas
NextArches: A Series, Part III-Rome, the Eternal CityNext
1 Comment
Oldest
Newest Most Voted
Inline Feedbacks
View all comments
peter Senft

I loved the fox/wolf story… Thanks