The Norfolk Coach at Christmas 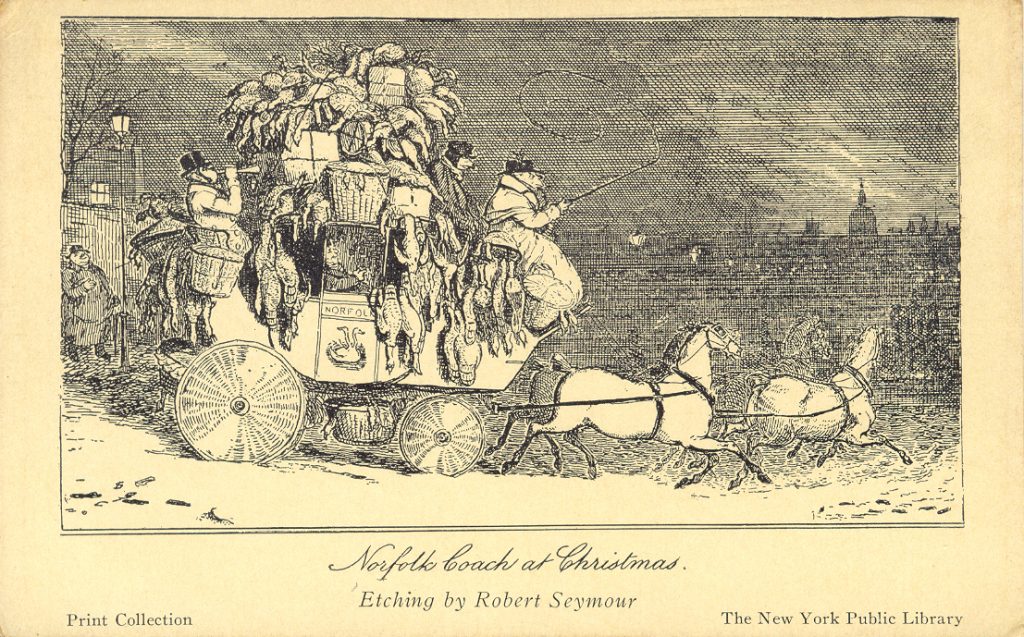 The Norfolk Coach has a long and storied history. The 18th century vision that you see on this postcard will likely bring to mind memories of old English literature. The etching is one done by Robert Seymour, an English artist who illustrated some of Charles Dickens’s novels.

The troubled life of Robert Seymour and how he dealt with his mental-illness is a story for a different time, but his work appeared in dozens of books in at least three languages from 1821 to 1836, the year of his suicide at age 38.

Information concerning this card was quite difficult to find, but with the help of a 612-page catalog published in 1889 by the Charles Scribner’s Sons Company that touts itself as “summary of American and Foreign Literature,” we are able to appreciate the rareness of the image and the story behind it.

Norfolk is a low-lying shire (county) in the east of England, where the administrative center is the town of Norwich. In much of English folklore, Norfolkshire is affectionately known as the nose of east Anglia.

During the reign of Henry VIII, the area was very much thought of as being a backwater. The rather pejorative saying, “Normal for Norfolk” often referred to the population as an incestuous lot among whom illiteracy was the norm.

The favorite epithet for anyone from the area was “Norfolk Dumpling” – a reference to the number of different fried-dough dishes that appeared on their common menus.

By the 1670s, when Norwich grew into England’s second largest city, it became apparent that regular contact with London was necessary. At first, passenger and delivery service was weekly, but since the 1770s a regularly scheduled coach has made its way from London to Norwich on odd numbered days of the week and returned the day after – at that time the trip of 121 miles usually took about ten hours.

The Norfolk Coach is mentioned frequently in English literature. Dickens is among those who wrote of it, especially in his novel, David Copperfield.

This is a Christmas story well known to our British cousins.

It was Christmas Season in Legendary Times when a man from Norwich decided to give money to the poor, but he had little knowledge of how to perform his act of charity. He hired a beggar. After a long talk the rich man had assured himself that the beggar was capable of the deed. They made a list of the needy, but the rich man was still unsure of the beggar’s trustworthiness. As a test the beggar was given a small amount of money and told to wait for the Norfolk Coach to arrive and purchase all the bread, fish, and foul and give it away. The money was soon gone, but the money did not buy enough for all the names on the list. The beggar returned to the rich man for more money but was refused. The clever way the beggar made sure everyone received a fair-share comes right from the Bible’s legendary King Solomon. When the rich man heard how the beggar solved the dilemma, he rewarded him with double the funds. The moral of the story being that people from Norwich were never selfish, dullards or simple-minded.

The Staff of Postcard History offers this article for your enjoyment. It is a combined effort of many: our publisher, editor, webmaster and collectors/contributors far and wide. Please use the COMMENTS feature below to let us know how we're doing.
PrevPreviousOyster Culture on Chesapeake Bay
NextPostcards for Christmas*Next
5 Comments
Oldest
Newest Most Voted
Inline Feedbacks
View all comments
Bob Kozak

So how did the beggar solve the dilemma?

That’s what i want to know!!

Did you get an answer to your question? I would also like to know.

The coach has on its door a picture of a Swan with Two Necks which was the name of one of the major London coaching inns. Norfolk was renowned for its turkeys and geese hence the large number of dead birds on the coach. These would seem to indicate the coach was on its way to London. Both turkeys and geese also used to be walked to London to be sold at Leadenhall Market. Although the stagecoaches started earlier the mail coaches to Norwich started in 1785 using two routes – one via Ipswich and the other via Newmarket.

You left me hanging, and I can’t find anything about this legend. Please explain how the beggar solved this dilemma.