New York, long-considered by New Yorkers, to be the center of the known universe, is not a star on a hill, but it certainly is a neon-light on an island. This city of just over 300 square miles was built at the southern end of the Hudson River Valley. An old TV program once proclaimed that there are eight-million stories in the Naked City. This is certainly another.

The world knows about New York City. America began here. George Washington was sworn in as the first United States President in New York. It is in his honor that this tour of the world’s arches visits and concludes. The Washington Square Arch, in the opinion of this humble professor, is the most elegantly designed, most courageous, and for its honoree the most perfect in the world.

Constructed with Inwood marble (named for a neighborhood in north-west Manhattan) that is just as often called Tuckahoe marble, the arch has a glorious luster in sunlight and changes only slightly when wet. The same stone was used in the construction of the Federal Building (1842) in Manhattan and Saint Patrick’s Cathedral (1858) on Fifth Avenue at 50th Street.

I have not stressed size in our visits to other arches – statistics are so soon forgotten – but at 77 feet high, this monument is indeed memorable for its size. The piers are spaced at exactly 30 feet and the arch rises to two-thirds its height – 47 feet. It is adorned with stars, the letter ‘W’, and icons of victory.

A wondrous thing called architecture occurs at the intersection of art and science when the two meet in the universe of human achievement. The average person can distinguish this phenomenon with a single glimpse. And the understanding is innate to all who can recognize the simple factors of space and shape, otherwise known as geometry. Geometry, therefore, is an inclusive combination of planes, rays, line segments, lines, and points.

It gives me great joy to mention the artists who have amplified the architect’s work by creating art inspired by architecture, and almost simultaneously creating art that is truly inspirational. 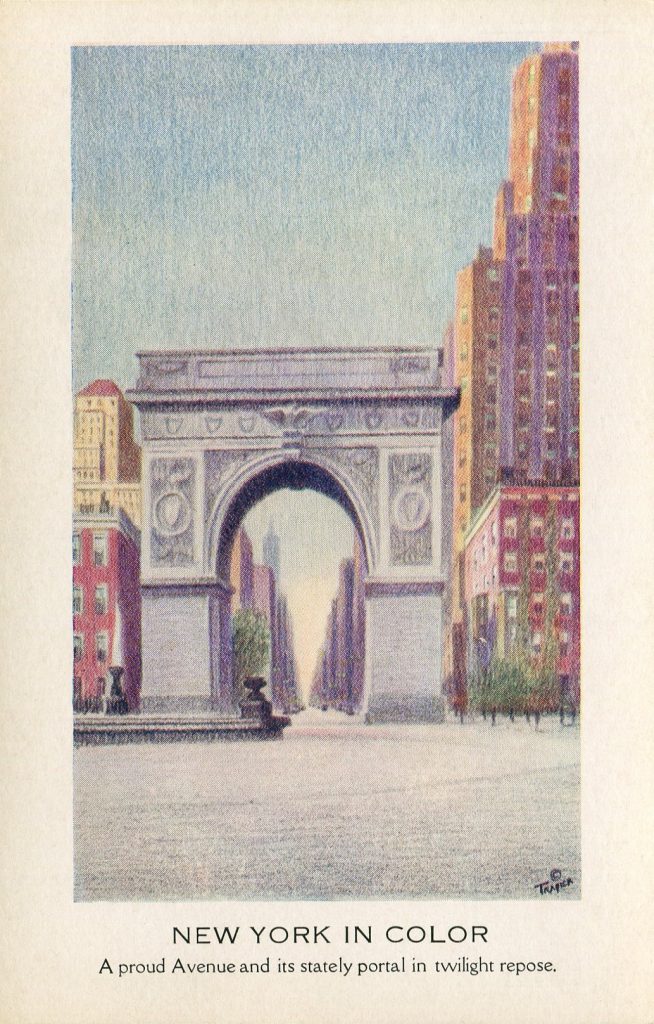 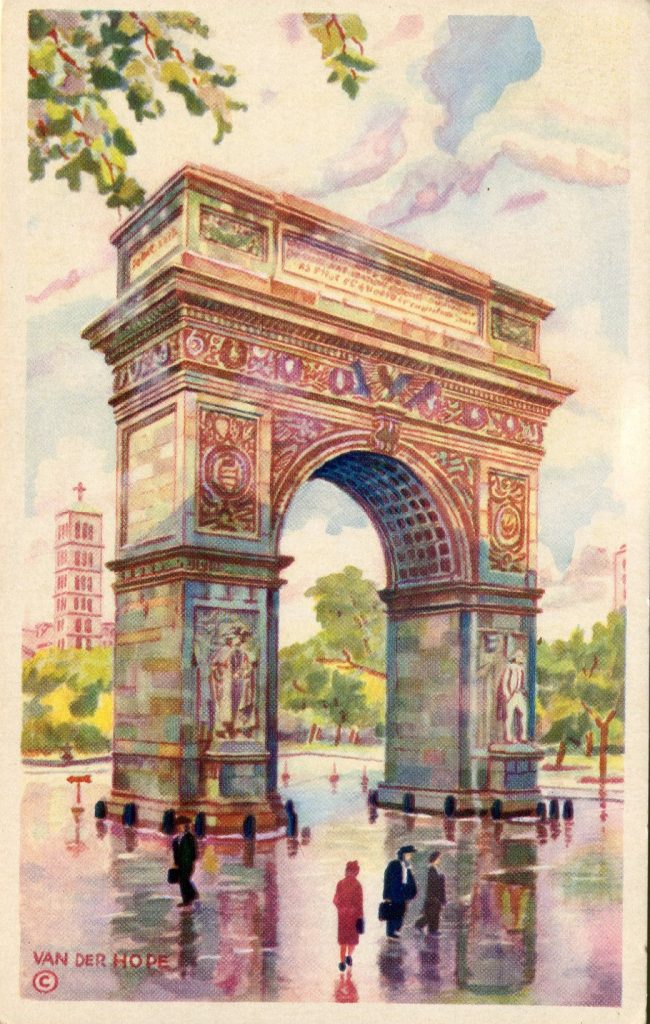 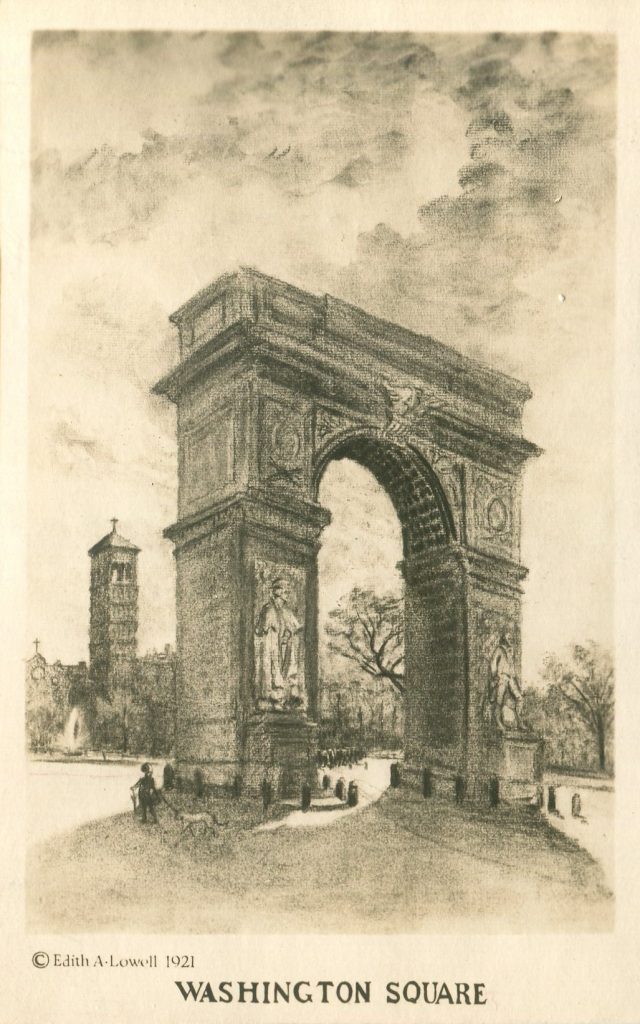 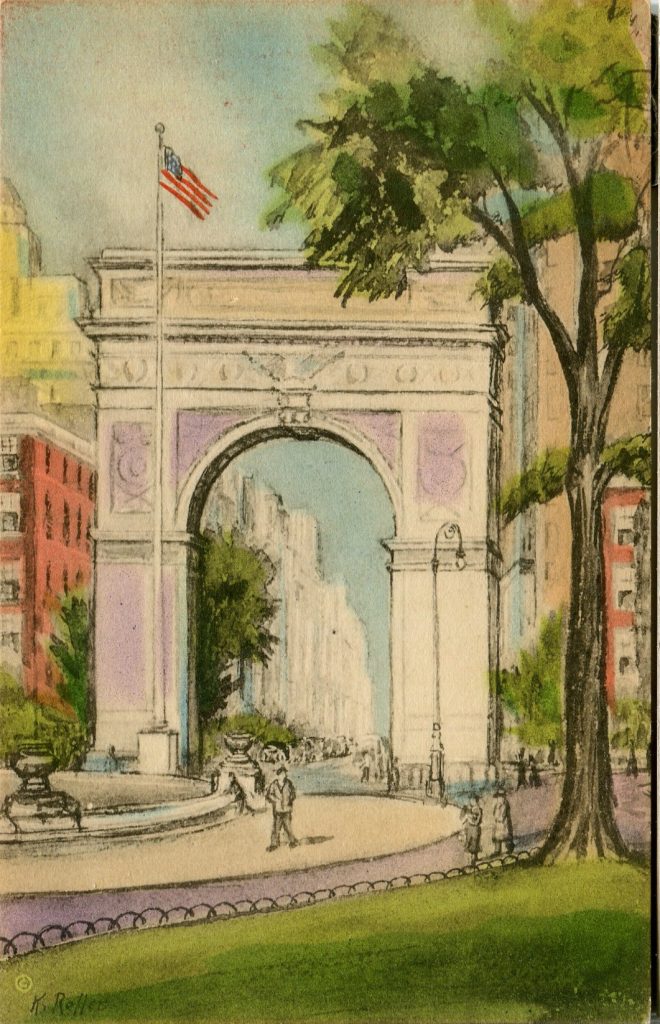 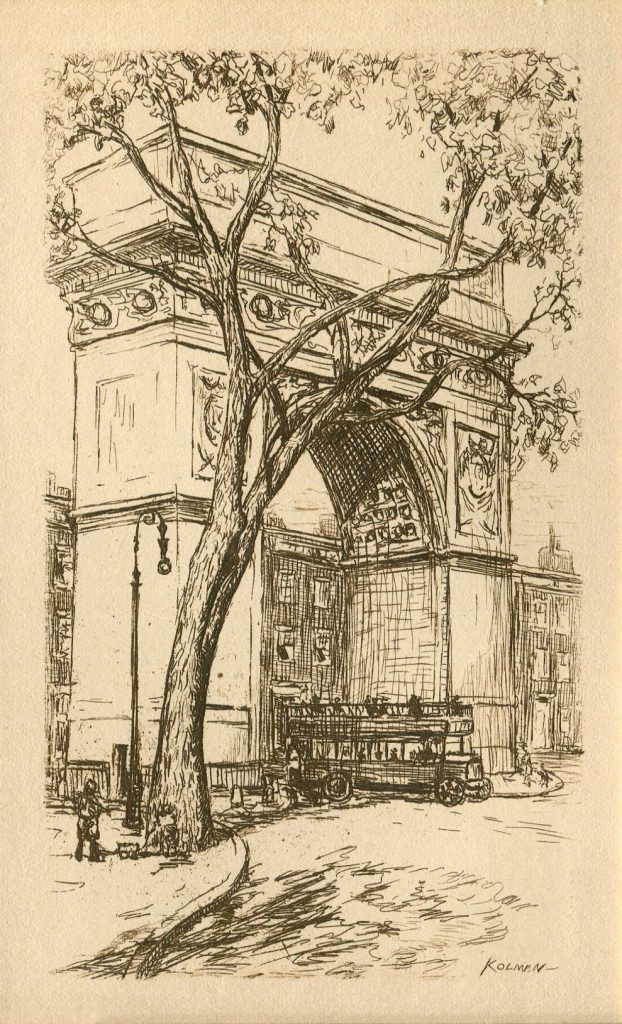 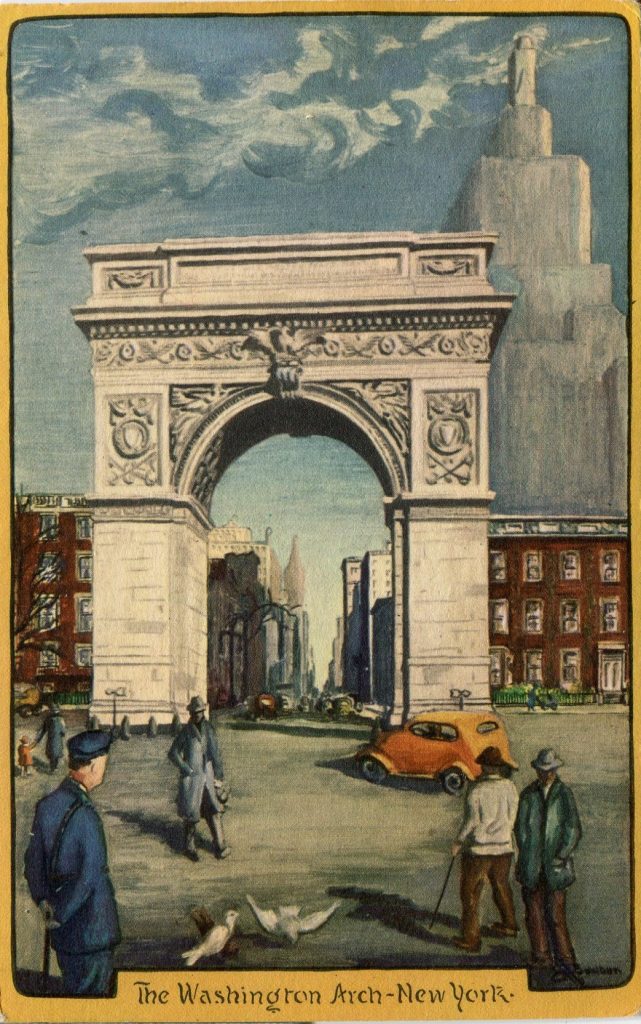 The images of this episode are from the collection of your editor, who for as long as I’ve known him, has been passionate about artist drawn postcards. When first asked to do a series of articles for Postcard History, your editor suggested that I would write and he would provide the illustrations. The result of that collaboration has been this series. It has been my pleasure.

One last thing about New York, before I go. Washington Square is not the only arch in New York City. Why you would, I don’t know, but if you have a craving for more, find your way to the Soldier and Sailor Arch in Brooklyn, the west face of the Manhattan Bridge, the façade of the National History Museum, and the front of the Manhattan Municipal Building.

Also, a heart-felt thank you to the enthusiasts who have remained loyal readers all the way to this finale, and a special thank you to those who have made comments concerning the places we have visited (especially the dear lady from Australia who sent her best wishes to my wife and my ever-faithful tabby, Sage).

Dr. Dancer is joining Postcard History as a pictorial tour guide. Nate has been collecting postcards for four decades and has amassed a vast collection and stores of knowledge on his favorite topic - public architecture. He recently became a pensioner. He and his wife live in north Scotland with their precious cat named Sage.
PrevPreviousHuman Zoos
NextWho Killed Stanny White?Next
6 Comments
Oldest
Newest Most Voted
Inline Feedbacks
View all comments
Gail

Thank you for a wonderful and informative article and such beautiful views of this impressive structure. I was fortunate enough to live on the south side of Washington Square Park with a view of the arch from my dorm room window for several semesters. I never explored the origins of the arch at that young age but I loved waking up to the site of it and seeing it all lit up at night. Thanks for the info and the beautiful postcards

Never paid much attention to arches, but since this article, as I look through my cards, I definitely have a new subject category.

This etching by Bernhard Wall is also of interest. 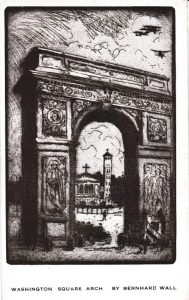 Here is the reverse side. 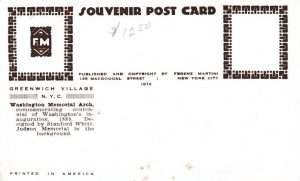 Of the cards depicted, my favorite is the one by Snowden, which shows a car apparently about to pass under the arch.

Jolly good postcards and they are very colourful