Here is the formula for disaster: take the most celebrated architect of the period – one whose creative flair is matched by his sexual appetites. Add Evelyn Nesbit, a most beautiful though underage showgirl of the era. Mix it up with an insanely jealous husband, the scion of a wealthy family with deep pockets for things like publicity agents. The result: a sensational murder in the most public of locations and legal proceedings that were called “the trial of the century.”

The 20th century saw several other spectacular trials – the Lindbergh baby kidnapping, the Rosenbergs’ nuclear espionage case, O. J. Simpson – but the murder of Stanford “Stanny” White came first and took place during the height of the postcard craze. Ephemera related to the trial, as you can expect, create a wonderful documentary trail.

Stanford White (1853-1906) was the stylistic energy behind the celebrated architectural firm of McKim, Mead and White. As New York was becoming a world capital of finance, fashion, and culture at the close of the 19th century, the architects gave form to the City’s aspirations through public buildings that revived and reinterpreted the classical forms of historic periods like the Italian Renaissance.

White’s most celebrated and iconic works included the Arch at Washington Square, that became a beacon for the City’s Bohemian subculture as celebrated in this real photo postcard by feminist photographer Jessie Tarbox Beals.

Equally notable was White’s 1890 design for the new Madison Square Garden, which provided space for public spectacles as diverse as trade exhibitions, sporting events, horse shows, circuses, and theatrical performances. The Garden’s most memorable architectural feature was its grand tower modeled after the Giralda in Seville. It was topped with a bold statue of Diana the Huntress created by White’s close friend and frequent travel companion, the sculptor Augustus St. Gaudens. Stanny kept one of the tower’s apartments as a personal studio. He used the apartment for parties among his intimate circle of artists and intellectuals.

Despite an intense work schedule and trips to Europe filled with shopping sprees to acquire paintings, textiles, and architectural pieces for resale to his clients, White maintained an active social life. Late night bouts of drinking, opera and theater-going, grand balls and trysts with an ambisexual crowd, often culminated at the Tower or his spacious Gramercy Park brownstone and at other nearby well-decorated apartments that White maintained for various guests and sensual liaisons. His wife and child were safely secured at their family estate in St. James, Long Island.

Strikingly handsome with prominent red hair and a distinctive well-tended bullmoose moustache, Stanford White was easily recognized as he traversed the City – sometimes in his own Rainier roadster. Discretion demanded that he avoid mingling with the “Stage-door Johnnies” that crowded the exits of popular theaters like the Casino to meet rising starlets. Nevertheless, this is where Stanny’s proclivities drove him.

One chorine who fell into White’s web was Evelyn Nesbit, sixteen years-old when they met, the youngest chorus line performer in Floradora, an English production showing at the Casino.

Having fallen out of middle-class security following the death of their husband and father in Pittsburgh, Evelyn’s mother determined to cash in on her daughter’s potential as a model and actress in Philadelphia and then in New York. The gambit paid off. Evelyn’s natural beauty and ebullience attracted photographers and casting agents.

Stanny came into her life posing as a charming patron and erudite mentor rather than as a prospective lover.

The seduction was strategically slow. Evelyn was increasingly invited into the interior spaces of the architect’s universe during 1901. The details broadcast during the trial have become the stuff of legend: late night visits to Diana’s statue atop Madison Square Garden, the Japanese kimono, the red velvet swing in a secret hideaway on 24th Street, unstopped champagne toasts and finally, the bloodstained bedsheet that signified the loss of Evelyn’s virginity.

Photographs made by Rudolf Eichemeyer and others around the time of the seduction were published as postcards during the trial and managed to visualize Evelyn’s innocence, seductiveness, and sense of injury. Portraits with the bearskin were particularly poignant as White was nicknamed “The Beast” during the legal proceedings. 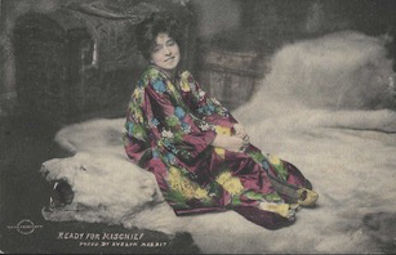 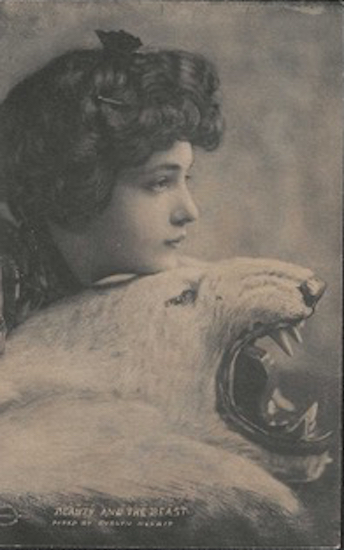 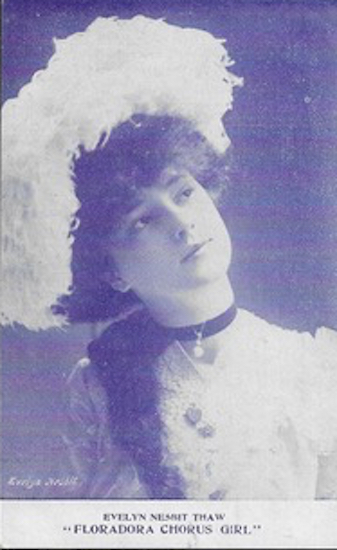 The affair went on for a while but as White’s ardor cooled, Evelyn increasingly felt jilted and aggrieved. Mrs. Nesbit and her daughter began inviting the attention of other suitors and even pulled Evelyn back from performance for a while to attend boarding school in New Jersey.

A man who entered her life at this time was a fellow Pittsburgh native Harry K. Thaw, whose family had grown rather wealthy in railroads and mining. Harry’s sisters had married well, one into the Carnegie family the other into British aristocracy. Early warnings of character flaws – drug abuse, a penchant for violence and sadism, coupled with obsessive jealousy and rage – were dismissed by Evelyn when balanced against the respectability and financial security he could offer. Despite her mother’s objections, Nesbit and Thaw traveled to Europe together on lengthy trips and in early 1905 were discretely wed.

Marriage did not soothe Harry Thaw’s obsessive anger with Stanford White. He unleashed a team of private detectives to harass the architect and they were both carrying weapons out of a mix of fear and contempt for each other. 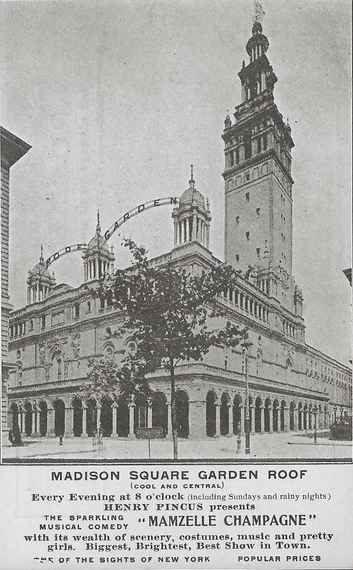 The denouement came on a warm summer’s night, June 25, 1906. Coincidentally, White and the Thaws had similar evening plans … to share some dinner with guests at the Café Martin, a bohemian place that was serving French food at the spot that had previously been popular as Delmonico’s and then, enjoy opening night of Mamzelle Champagne, a musical revue at the theater atop Madison Square Garden just a block away.

Despite being aware of each other’s presence, there was no confrontation at the restaurant. As the show was ending, however, a dark figure approached White, a minor investor in the production, and shot at his head from close range three times.

White was killed instantly and rendered unrecognizable by powder burns to his face.

Although the trial of Harry Thaw did not begin until the start of 1907, public judgement was instant and not altogether sympathetic toward the victim. Stanford White was condemned as a “voluptuary” and pedophile while his considerable public works, leadership of American architecture and personal support of young artists and those experiencing hardships were relegated to lower positions on his list of achievements.

Things only worsened for Stanny White’s reputation as the trial got underway and publicists hired by the defense sought to turn the murderer into a hero. Matters were not helped by Evelyn’s detailed testimony that many decried as bordering on pornography. Crowds of up to 13,000 stormed the courthouse attempting to gain admission as observers and to hear public updates. The first trial ended with a deadlocked jury. 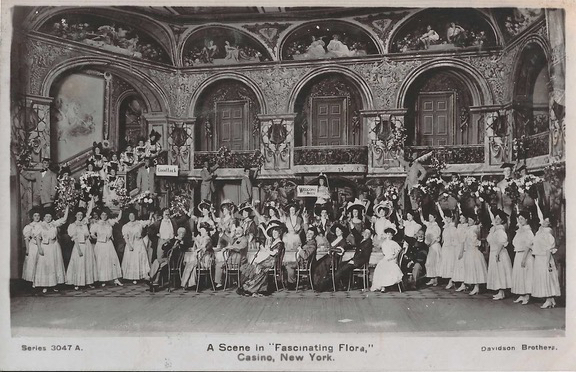 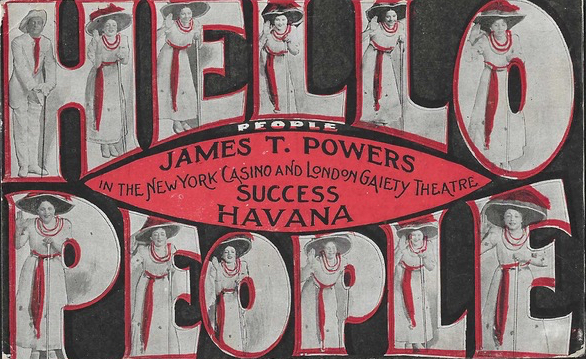 Even the Café Martin, where the evening’s deadly ending had its start, enjoyed a boom. The eatery celebrated its serendipity with a set of postcards that called attention to the distances that folks were traversing to visit. “All roads lead to the Café Martin,” they boasted with some justification. 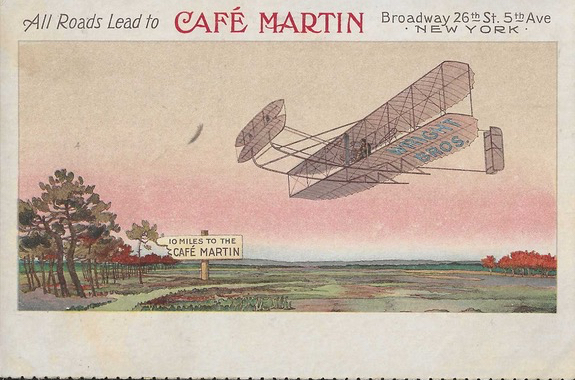 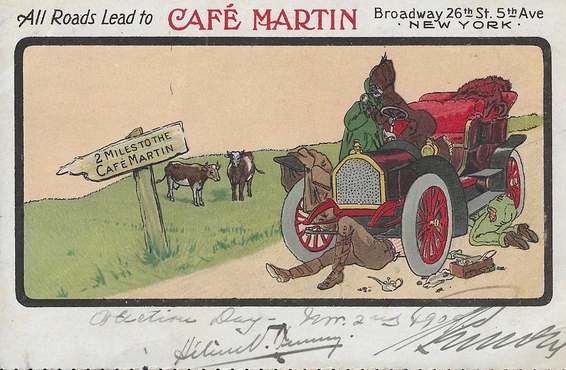 The second trial of Harry Thaw that began in January 1908 ended with a verdict of not guilty by reason of temporary insanity. Lauded as a victory this judgement led to several years of intermittent confinement in mental institutions. Thaw finally gained acquittal in 1915 and celebrated the occasion by divorcing Evelyn Nesbit on the grounds of adultery.

Epilogue: History was not kind to revivalist architecture after Stanny faded from the scene. Seeming tired and out of date, even White’s Madison Square Garden was demolished in 1925. As the heart of New York’s theater district moved above 42nd Street, the Casino (not designed by McKim, Mead and White) faced the wrecker’s ball in 1930.

Even what was arguably MMW’s greatest masterpiece, New York’s Pennsylvania Station was hauled to the dump in 1963 and replaced with the latest, though notably inferior, incarnation of Madison Square Garden.

Thaw experienced several subsequent incarcerations and commitments to mental institutions. He died at 72 in Miami in 1947 leaving an estate still valued at more than a million dollars. Evelyn could never again muster the traction to restart a performance career and failed at several other ventures like cabarets. Eventually, she earned income from selling her life story and acting as a consultant to the film The Girl in the Red Velvet Swing.

Dying at 82 in California, she lived to regret her inflammatory testimony that redeemed her husband while condemning her lover.

Fabulous article! Architectural history and true crime are two of my passions so I relished every word in the article…..very well written — it was a real delight. Although I’ve been very familiar with this particularly dark and salacious momentvin history for several decades, I was thrilled to learn a few new things about this still intriguing moment during the early years of postcards’ golden age. Thank you.

Had she come along a century or so later, Evelyn would have been a social media star, doing TikTok videos while perched in the red velvet swing.

Interesting story, I might have her postcards, in my collection.