After an exhaustive survey, I asked my wife, “What kind of natural wonder would you most like to see on a postcard if one came in today’s mail? A rock or a waterfall?” She replied a geyser!

Postcards showing natural wonders were, are, and continue to be a favorite topic of buyers, senders, and collectors. Rocks and rock formations seem to amuse people the most. Tourists and travelers want those at home to see the beautiful and unusual, so they send postcards showing rocks.

Waterfalls are equally entertaining. There are waterfalls everywhere, but they are like fingerprints – no two are alike. Since few nature lovers would ever say something like, “… isn’t that an ugly waterfall” they too are popular.

First discovered in 1901 by a crew of prisoner-workmen, the Lady Constance Knox Geyser is named after a daughter of the 15th governor of New Zealand.

The Lady Knox has a peculiar characteristic in that it can be induced to erupt with a surfactant. (This is probably a terrible definition, but a surfactant is a first-cousin to a detergent.) At 10:15 each morning a surfactant is inserted into the geyser’s vent and the ensuing water jet often reaches 60 to 65 feet and lasts for more than an hour.

The cone-like spout-housing is an accumulation of silicon particulates precipitated from the water of every eruption. 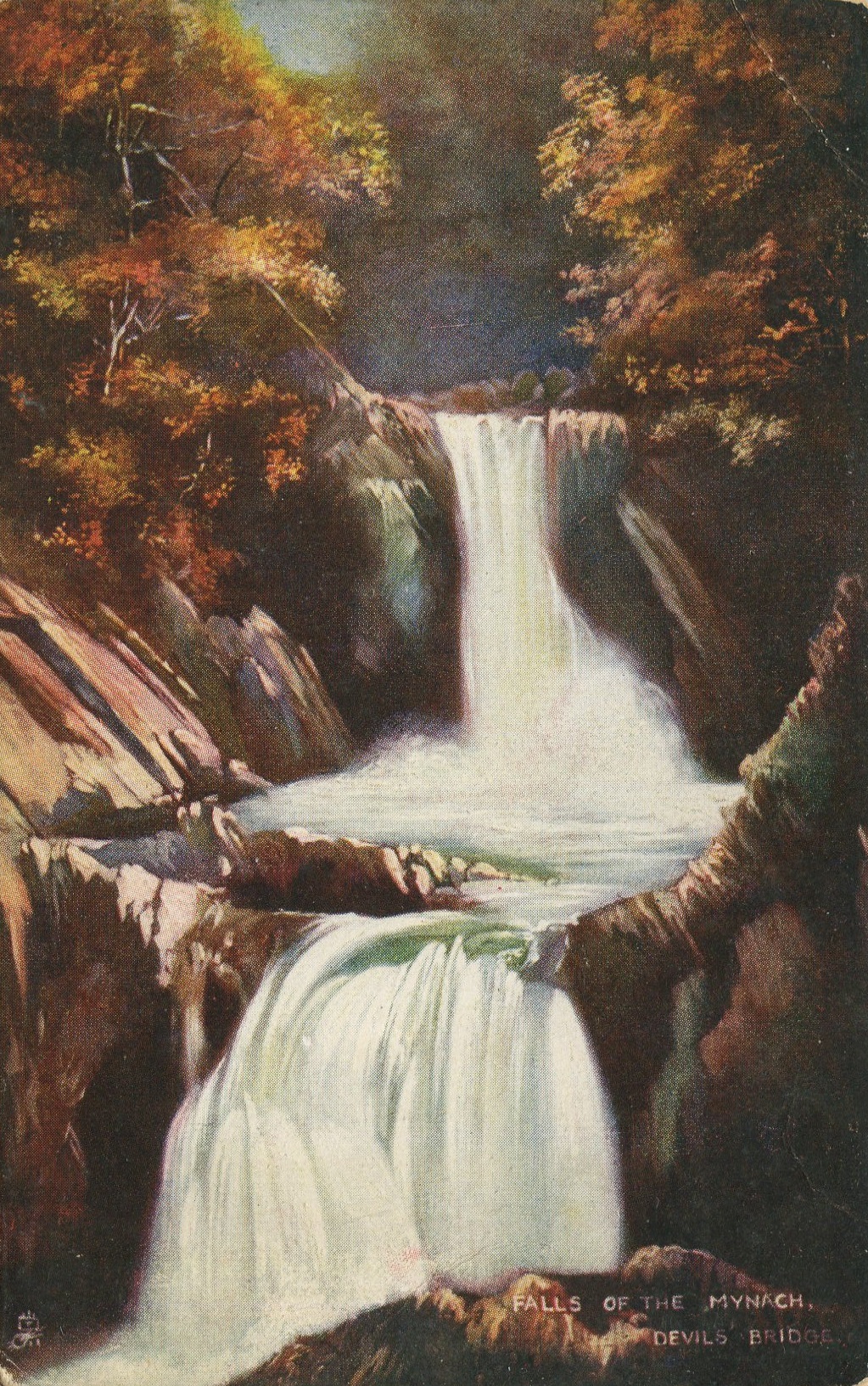 On the west coast of Wales is a university city named Aberystwyth. It may fairly boast of unparalleled educational opportunity and natural beauty. Few Americans have travelled there so when I arrived looking for official documents to certify a genealogy search, it was one of the few occasions that linguistic accents got in the way of progress.

The town of about 12,000 residents is in Cardiganshire. Its university continually ranks among the best in the world, and quite nearby the town center is the mouth of the Ystwyth River. In the highlands to the east the Mynach River follows down a narrow ravine and at one point the Mynach Falls allows the flow to drop more than 300 feet in a series of five steps. The constant flow of water is loud, but tranquil and there is no better place to spend a warm summer day. 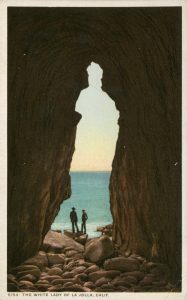 It is easy to see why the White Lady Cave in La Jolla, California got its name. When the sea-gate is calm, the image resembles a tall, countess-like figure clad in a long white dress with a sea-blue skirt. The cave is secluded and for eight to ten months of the year it is totally inaccessible because of the plus-10 force waves that crash relentlessly into the rock-walled beach. The La Jolla Sea Caves are examples of natural extremes. There is no evidence of being affected by earthquake and little indication that erosion will ever be a concern. The White Lady is the easternmost cave and its location contributes to its inhospitable environment. Crashing waves create a white mist that constantly engulfs the area.

There are very few White Lady postcards. This image is a Detroit postcard, but others – namely some almost scary real-photos, show thundering, 30-foot waves bombarding the sea-gate.

When this postcard image was shared recently with a friend familiar with the area, his remark was, “This picture is a summertime image, it’s the only time the sea is so calm.”

Very interesting! Did not know there were any active geysers on the East Coast but makes sense they are in Saratoga Springs.

Very interesting especially the White Lady Cave, and the geysers. I am 76 years old and post cards continue to be a learning tool for me, not a lot of detail on any one particular subject, but a little detail on many different subjects. It is a shame that they will not be available to the younger generations. For some reason which I don’t fully understand, computers, while holding a tremendous amount of information, just don’t have the appeal of receiving a post card in the mail.

Over the years, I have learned that people do love rocks on postcards. My favorite is “Visit Rock City.”

I always used to send a picture postcard to my folks whenever I went traveling.